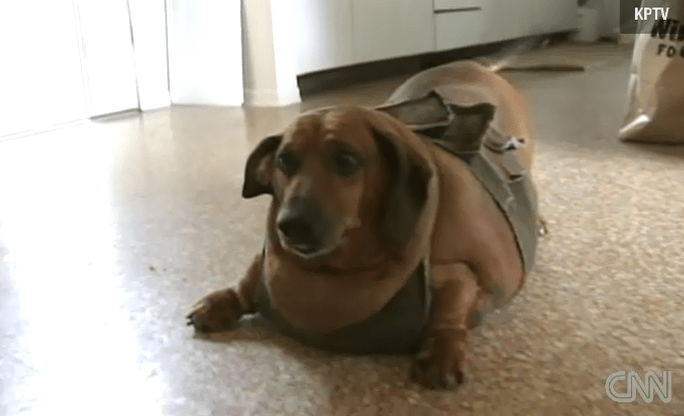 So Allie runs into my office and  says I have to see this video about a 77-pound weiner dog. Dachshunds are just adorable little “hot dogs.” If I owned you, better believe I’d dress him up in a hot dog costume all the time.

Anyways, this poor little, er, obese pup named Obie was apparently super duper loved by his previous owners: an elderly couple who probably fed the dog better than they fed themselves. He clocked in at a whopping 77 pounds!!! That’s way heavier than my 7 or 9 year old!

Now some nice younger woman has taken the pooch in, put him on a strict diet and hopes to get him down to proper doggie size before long.

I normally laugh at ridiculously fat cats that can barely move. So I thought I’d find this just as funny, but it actually makes me a bit sad just watching this chunker try to walk. He’s so big, it looks like he can barely wag his tail!

I did get a chuckle out of the owner’s comment that he’s an “inspiration to so many people.” Um, how so? Because he was able to eat 10 times his own body weight? Because he’s now losing weight, solely because his owner isn’t feeding him five whole chickens at every meal?

Just take a look at this poor sad sack as he sees all the other happy dogs jumping and running around. He’s wishing he can just join them. And you know what they’re thinking? Yeah, they can’t wait to tell their friends at the doggie playground all about their portly puppy brother.

View it for yourself:

What do you think: Funny or Sad?

2 thoughts on “77-Pound Dachshund Weighs More Than My Kids!”