I commute into Manhattan every weekday, mixing a train ride with a subway and a few blocks on foot. It’s roughly a 45 minute train ride, so I have a good chunk of time to get some work done on my iPad.

When I first bought my iPad, I knew I’d use it on the train, so I bought a fairly cheap cloth case that included a bluetooth keyboard. I liked it and it got the job done, but after about 6 months or so, the fabric started to wear, and the velcro edges lost their magic touch. Which meant the iPad was always flopping over as I typed.

So I needed a new one. A different one. And that’s when New Trent offered up the Airbender 1.0 for review. I’ve been using it for a few days now and I’m already in love. In fact, I’m typing this post itself on the train using my New Trent Airbender 1.0!

Unlike my previous case, this one has a nice hard shell on both sides. I feel loads safer carrying it around, especially when my kids grab a hold of it. I thought it’d actually be a bit heftier than my previous case because of the material but I was wrong. It’s actually a little bit lighter and that could be due to the fact that it’s a little smaller.

The keyboard is attached to the entire case, and you just pop the iPad right into the holder. I find the keyboard itself real nice. The keys are soft and easy to press. They’re also certainly big enough to type without the usual mistakes my big fumbling fingers cause. It has the usual helpful function keys with volume controls, brightness controls and media play/pause buttons that make my commute tolerable.

The absolute coolest part though is that you can turn the screen super duper easily. This thing looks like it’s right out of Star Wars, the way it twists and turns and even flips completely over if you want to quickly show your screen to someone sitting across from you.

To stand the iPad up, there are two slots to stick it into depending upon the angle you’re using it at. The first time I put the iPad in a slot and was showing Ryan, I was a little disappointed. The iPad stood almost straight up. “How am I going to be able to see the screen when I type?” I asked him.

Then we touched the case and saw that you can adjust the viewing angle by simply pulling back on this one piece! Success!

I previously wrote about New Trent’s PowerPak 10.0 and after reviewing the Airbender 1.0, I am a definite new fan of this company. This case couldn’t be any smaller or slicker at all. It does its job real well and lets your iPad itself really stand out. It’s great for working at a desk or on your lap while heading to or from work every day!

My kids also think it’s just the coolest-looking thing ever and can’t wait to show everyone “daddy’s new iPad case” whenever anyone comes over. Functional, slick and a great conversation piece! Yeah, the New Trent Airbender 1.0 is definitely something worth writing home about. Especially if you happen to be writing on the go! 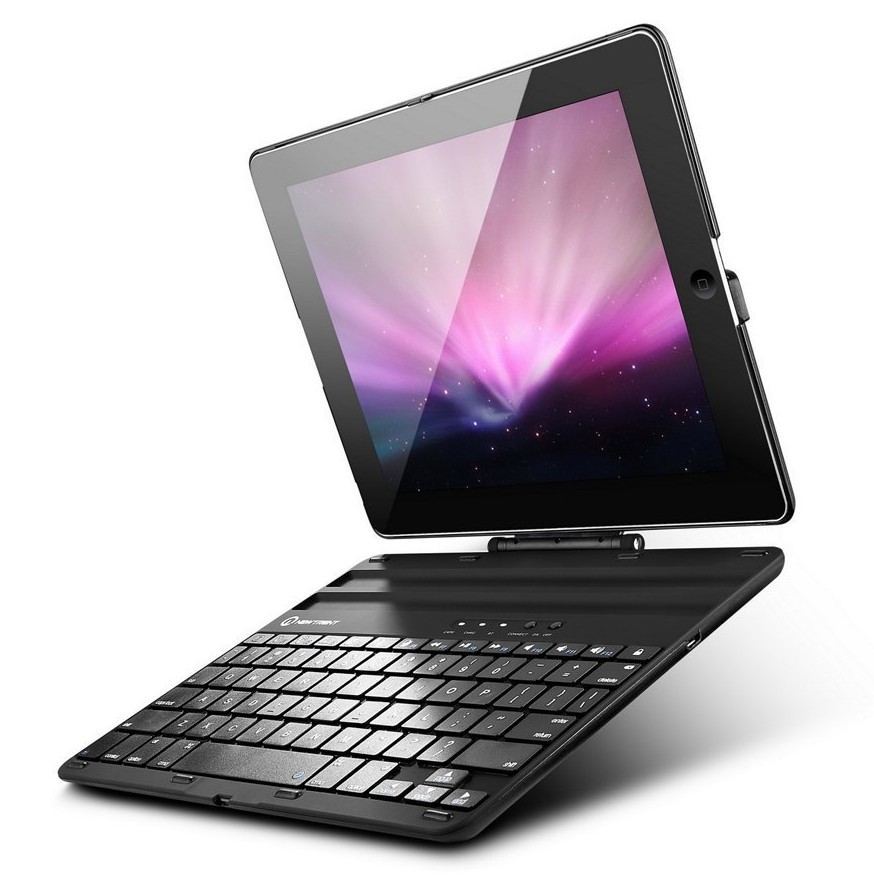 Disclaimer: I was sent an Airbender 1.0 for review. No other compensation was given. All opinions expressed in this post are my own and were in no way influenced by the company.

7 thoughts on “New Trent’s Airbender 1.0 Converts My Train Seat into an Office”