I’ve written before about how Ryan loves to collect “guys.” The smaller the better, because he can grab a handful and run around the house smashing them into each other. He’s got Squinkies, Crazy Bones, Bonkazonks, little Japanese erasers, Lego Mini-Figs, you name it. So when I had a chance to review Party Animal’s NFL TeenyMates, I couldn’t really pass (pun very much intended) those up.

Football’s easily my favorite sport. I’ve been a huge Pittsburgh Steelers fan since the early ’70s when I was in Elementary School. I somehow jumped on their bandwagon then, and never jumped off, despite the awfulness of the 1980s. My dad’s always been a NY Giants fan, so they’ve been my #2 team, and despite them being another local team, I just can’t seem to bring myself to like the NY Jets. They’re just so… so… so unlikable.

Each TeenyMates package includes 2 random NFL Quarterbacks and  2 puzzle pieces that combine to form a full 2-sided puzzle, showing off a full football field on one side and a fun TeenyMates poster on the other. The figures are only 1″ tall but surprisingly detailed for such little guys. They’re pretty cute and are generic enough not to look like specific NFL players (who seem to jump ship way too often these days).

Sadly, I didn’t get my Steelers QB, or even a Giants QB. But thankfully, I didn’t get a Patriots or Ravens one either, so I’m cool with that. I remember as a kid collecting tiny little football helmets. I didn’t really play with them, I just collected them, hoping to get a full set. I can easily see myself doing the same with these guys, looking to line up all 32 Quarterbacks (plus the 3 rare figures).

My kids liked them and enjoyed just fake-wrestling/fighting with them. At $3.99 a pop, these could be fun stocking stuffer type toys or even great as goody bag gifts for birthday parties. If your kids are big into sports, they’d definitely get into these. I’m just hoping they do more than just quarterbacks though, and maybe even create a neat football stadium to store them in, complete with goal posts.

One thing’s for sure, these NFL TeenyMates are certainly getting me in the mood for the next season of football!

The super awesome folks at Party Animal Inc. have even offered up some packets for a giveaway, so now you can get a shot at scoring some for yourself! Three lucky winners will each take home a set of 3 Teenymates packages! 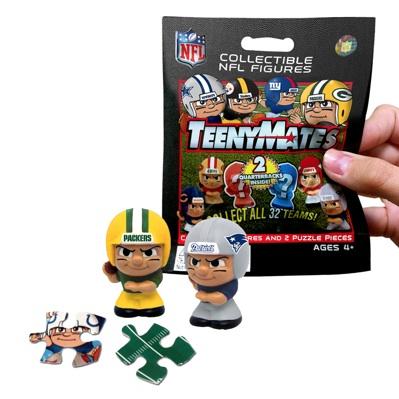 Big team shout out  to Party Animal Inc. for sponsoring this great giveaway!

Giveaway ends on September 7, 2012 at 11:59 p.m. The 3 winners will be chosen at random and announced on this site. Giveaway is open only to legal residents of the fifty (50) United States (including District of Columbia) who are at least eighteen (18) years old at the time of entry. The Winner will be notified by email and has 48 hours to respond or a new winner will be chosen.

I received a set of the featured product in exchange for my honest opinions. The thoughts and opinions expressed in this post are my own and in no way were influenced by the company providing the product.

Hypersweep – Thousands of sweepstakes and contests!