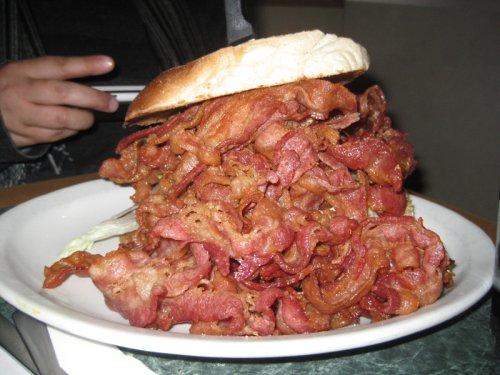 I have some horrific news to share. No, it’s not about politics. Nor disease. Nor blind referees who can’t make a correct call in a football game to save their lives. No, this is much more serious. In fact, it’s something tantamount to apocalyptic proportions.

I’m not talking about the start of The Walking Dead’s third season (which kicks off this Sunday!). No, I’m talking about bacon. Yes, bacon. Nature’s perfect food.

According to some key studies worldwide, we my friends, are on the verge of a Bacon Shortage! It seems that Britain’s National Pig Association has just announced that all of Europe’s main pig-producing countries are seeing a decrease in the size of their herds. To put it simply: less pigs means less bacon.

There are those, however, who say all this hoopla about a bacon shortage is completely unfounded. Matthew Yglesias recently wrote a column on The Slate claiming the whole bacon shortage outcry is a complete exaggeration. It’s merely Britain trying to explain away an impending price increase for bacon. And it has something to do with corn too.

Regardless, the mere fact that someone would even consider the possibility of a bacon shortage is terrifying to say the least. Bacon is, after all, one of the four main food groups. There are bacon wallets. Bacon dental floss.  Even Lady Gaga wore a bacon dress, didn’t she?

I’m praying this bacon shortage rumor is just that. But what if it’s not? And what if this is the one thing that tips humanity over the edge and in fact triggers World War Z… the Zombie Apocalypse?

I don’t even want to think about it. Someone get me a Bacon Double Cheeseburger. Stat!

11 thoughts on “Brace Yourself for the Aporkalypse: A Bacon Shortage is Coming”