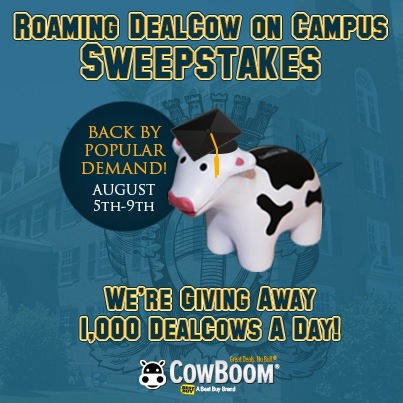 I went to college in upstate NY at SUNY Binghamton. I made some great friends, met my wife there and even learned a thing or three about writing.

The thing is, at the time, Binghamton, NY was kind of a… well, pretty dull area. Other than being the birthplace of Twilight Zone-creator Rod Serling, the only other thing it had going for it at the time was the Binghamton Rangers hockey team.

So what did college kids do for fun? Well, they’d drink like most college kids do. But they’d also go out to the nearby farms at night, go up to sleeping cows (they sleep standing up, y’know) and… tip them over. Yes, it’s officially called cow tipping.

Personally, I never participated. I’m not saying I was above all that, I just never really got into it. Plus after a few months in my freshman year I had a girlfriend and well, when you’re in a relationship, there are a lot more fun and exciting things to do than tip bovine.

Anyways, why am I talking about cows? Because one of my favoritest sites, CowBoom.com, is running a Roaming DealCow Sweepstakes! If you’re big on refurbished electronics, you’ll certainly dig CowBoom, which is owned by electronics mecca Best Buy.

And if you’re big on cows, you’ll love this sweepstakes. From August 5 through August 9, they’ll be giving away 1,000 adorable squishy DealCows every day! Just visit the CowBoom Facebook page and click on the “Roaming DealCow on Campus Sweepstakes” app.

But they’re not just giving away 5,000 DealCows this week. Uh uh. There’s also a huge contest coming up.

You can take a photo of you and your DealCow (see, that’s why you have to win one first!) at school and describe where your DealCow roamed on your campus. From August 19 through September 24, you can submit your entry on their Facebook page by clicking on the “Roaming DealCow on Campus Photo Contest” link.

What are they giving away in the photo contest? Only some pretty sweet Back to School Bundles that include an Asus Touch Screen Laptop, Apple iPod Nano & $100 Visa Gift Card! Not too shabby for simply taking a photo of a cow, right? 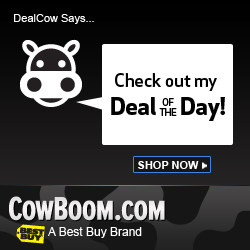 2 thoughts on “Moooove It or Lose It! The CowBoom DealCow Sweepstakes Returns!”