I’ve worn glasses almost my entire life. Pretty much full time since first or second grade. My dad actually noticed my vision problems when he’d take me to NY Knicks games at Madison Square Garden and I had a ton of trouble reading the fuzzy scoreboards.

Over the years, my eyesight got worse and worse and worse. Until I pretty much could substitute a pair of Coke bottles for my glasses. Yeah, that’s how bad my vision is. Thankfully by High School I started wearing contacts. Man, those glasses are heavy!

Yes, I’ve heard all the jokes. No, I can’t see life on Mars. No, I’ve never tried burning ants with these. Yes, these glasses are crazy thick. I know, I know.

Oddly enough, Allie had severely bad eyesight as a baby. She was extremely far sighted and had a lazy eye. But at just 13 months old, she wore glasses and it corrected her problems. Amazing how something that severe can be nipped in the bud early on, instead of her having to deal with poor eyesight her entire life.

So with two parents who have pretty poor eyesight, do my kids even stand a chance?

Getting your eyes checked annually is pretty much a given for me and it’s something that’s real important for my kids, or any kids for that matter. So far Jason and Ryan have been lucky and haven’t needed anything. But I’m definitely keeping my eye on them (yes, pun intended) to see if I can notice any troubles at all.

The worst part of eye care though is that most regular health insurance plans don’t cover any of it. Not the eye exams, the glasses, medications, etc. I don’t even want to think about the amount of money I’ve spent on my eyes over the years. Thankfully there are companies that can help, such as VSP Vision Care. They can certainly help you save money (on average, members can save $320 annually) while you save your eyesight.

Did you know that according to VSP, 80% of what you learn is through your eyes? Further, many children with learning difficulties are later diagnosed with some form of vision problem. It’s amazing how much of your life can be affected simply by poor eyesight.

I remember how much better and more confident I became in Little League when I finally got my first pair of glasses. Suddenly I could actually see the ball approaching the plate after it left the pitcher’s hands. Okay, so I still struck out a lot, but at least I could see myself missing the ball!

Considering the amount of video games my kids play, and the fact that like their old man, they’re constantly staring at a pixelated computer screen, I have to worry about eyestrain a bit. I can try to monitor their behavior more and get them up and about regularly, but even still, it’s more important than ever to have their eyes checked regularly. 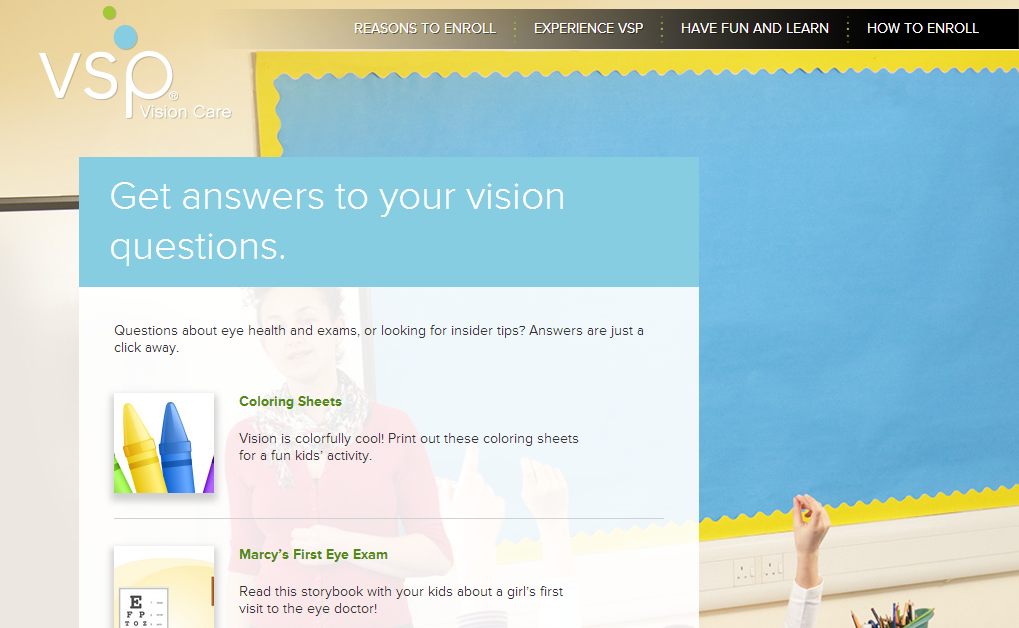 My kids have already visited an eye doctor more than once, so they’re used to it. But if you have younger kids who haven’t quite made it there yet, there are plenty of eye care activity sheets and information on VSP’s site to help prepare your kids for what to expect.

As parents, we have a zillion things to worry about with our kids. We certainly help shape how they view the world around them, so the least we can do is make sure they can see it.

Have your kids had an eye exam yet?