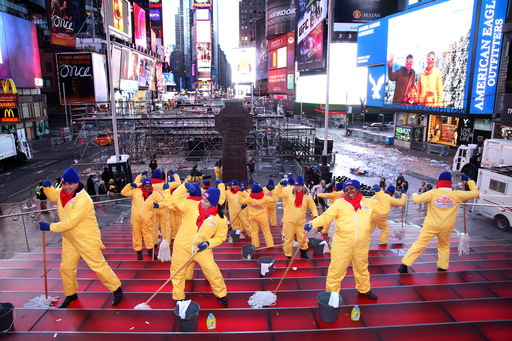 You think your house is a mess after last night’s New Year’s Eve partying? Yeah, you should see Times Square in Manhattan.

I’ve lived in New York my whole life, growing up in the suburbs of NYC. And yet, there are a number of touristy things I’ve never done. I haven’t been to the top of the Empire State Building, never saw a Macy’s Thanksgiving Day parade in person, and never hung out in Times Square on New Year’s Eve.

To be honest, I’m fine missing out on the last two, but I will make it up to King Kong’s hangout one of these days. Considering it was like 20 degrees in Times Square last night, I was quite happy watching the ball drop from the comforts of my own home. Or in last night’s case, from the comforts of some friends’ home. (Thanks again, Stacey and Eric!)

As for Times Square, there was an estimated 40 to 50 tons (yes, TONS) of confetti, party hats and other assorted celebratory trash left on the streets after the clock struck midnight. How’d the New York City Department of Sanitation (DSNY) tackle this crazy massive cleanup? With roughly 22 trucks, 24 mechanical sweepers and 37 backpack blowers. Suddenly that precarious stack of dirty dishes on your counter doesn’t seem so bad, right?

Don’t feel too bad for the DSNY, though. That’s because they had a bit of help in the clean-up department. This year, they brought in some real muscle. Specifically, that’d be Mr. Clean Liquid Muscle! 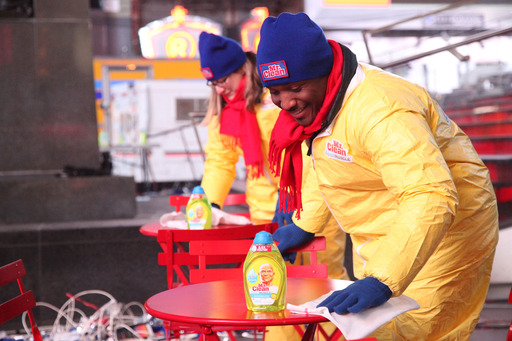 A special 25-person Mr. Clean Team led by Julie “The Accidental Housewife” Edelman was on hand in Times Square to help clean up one of the year’s biggest, and messiest bashes. The new Mr. Clean Liquid Muscle apparently has 2.5 times more power in every single drop versus Mr. Clean 40 oz version, and the Mr. Clean Team took to work on Times Square’s famous Red Steps. 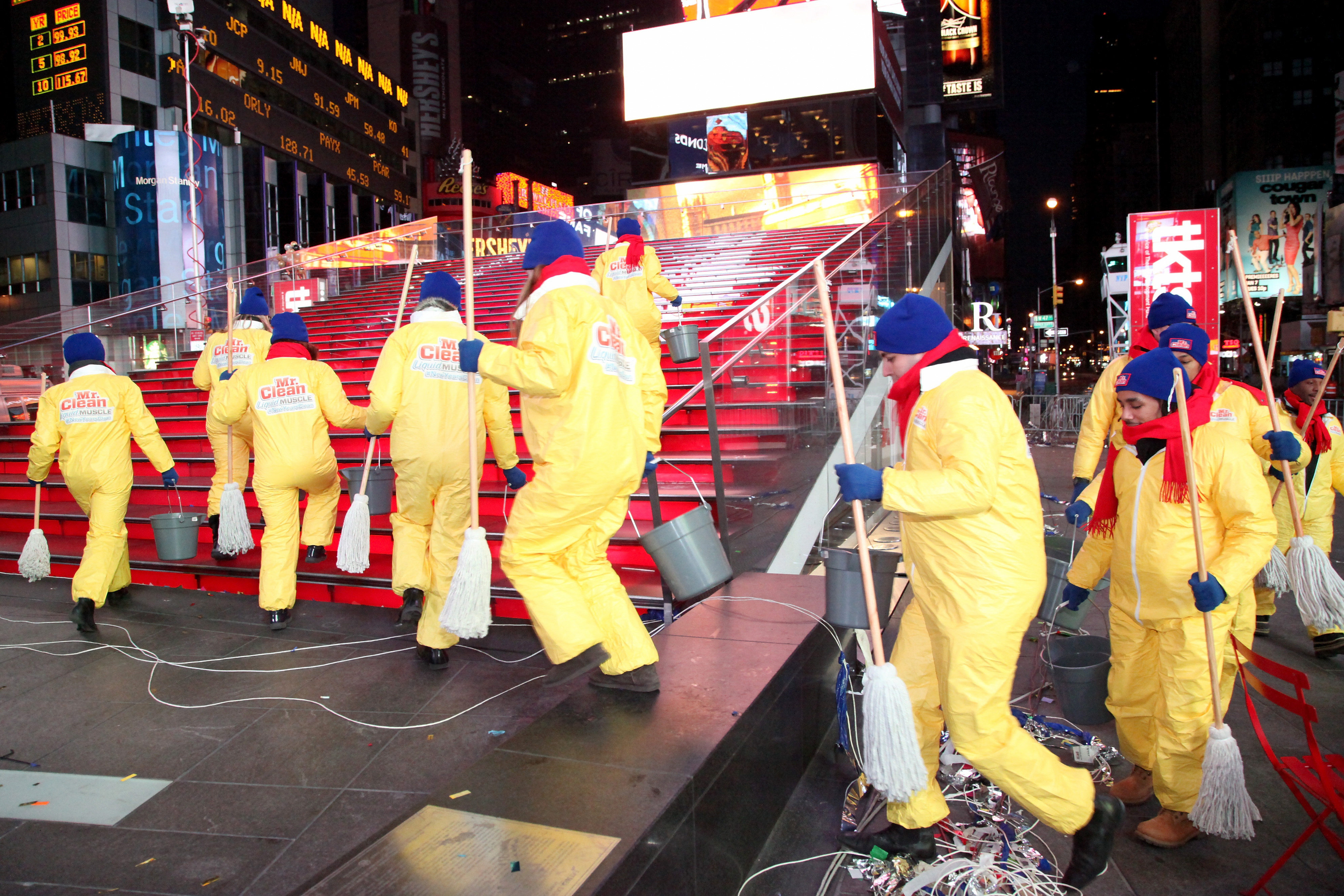 The new Mr. Clean® Liquid Muscle™ has 2.5 times more power in every drop vs. Mr. Clean 40 oz. With its new auto-stop cap feature, Mr. Clean Liquid Muscle delivers the right amount of cleaning gel with one squeeze – free of mess. It penetrates dirt, fights grease and lifts stains with less going to waste. Liquid Muscle can be used on a variety of surfaces, including sealed floors, tables, countertops, sinks, stovetops and more. 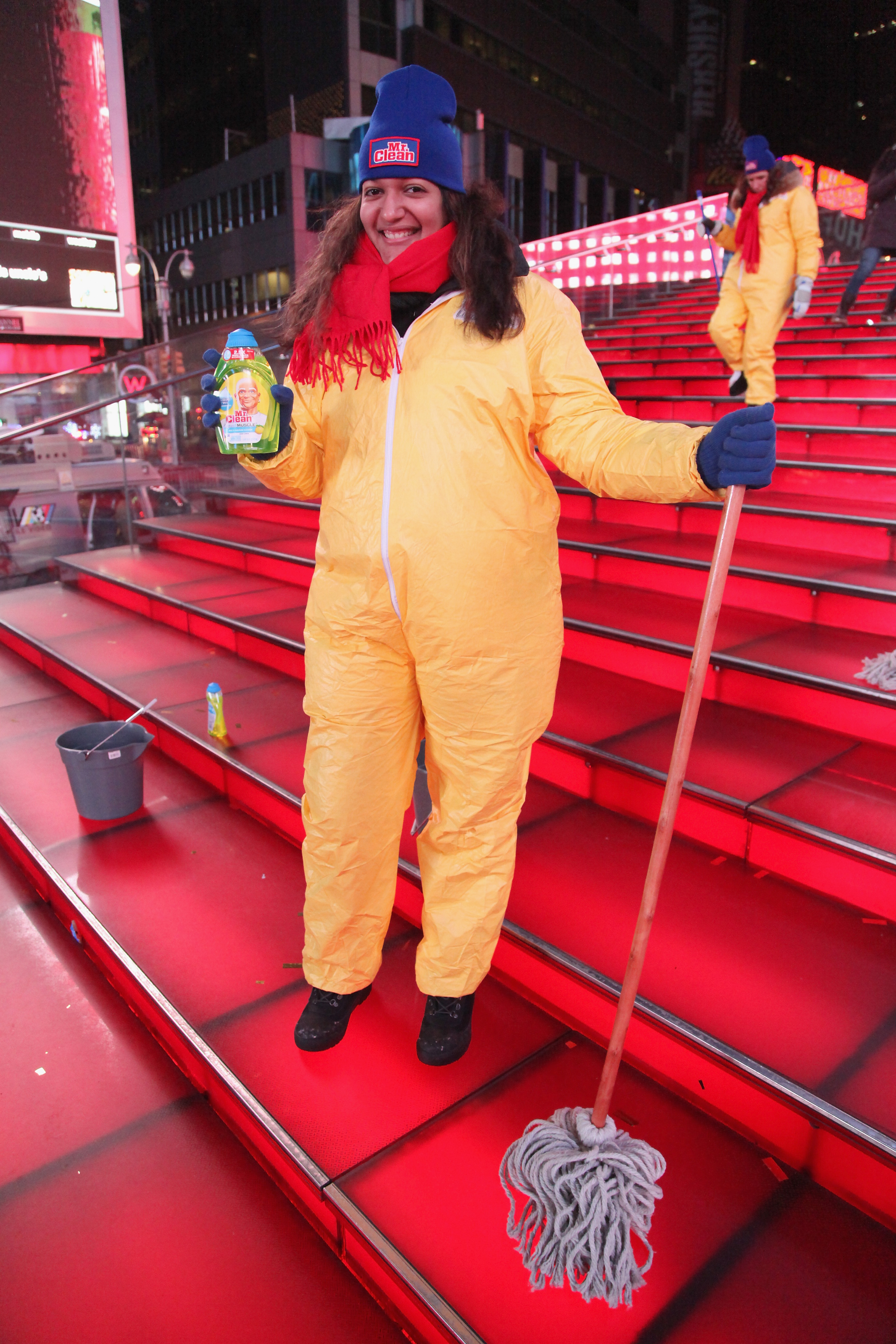 All I can say is that if just a drop of this stuff can help clean the mega grime off of Times Square on a normal day, it’d be pretty amazing. Using it the day after the streets were lined with a ludicrous amount of people packed in like sardines, well, that’s pretty darn spectacular. I can’t even imagine how well it’d work on the floors in my own home. Yeah, the floor’s so bright, ya gotta wear shades!

Visit MrClean.com for more information about Liquid Muscle and the rest of the smiling Clean Family. And be sure to follow ol’ baldy himself on the Mr. Clean Facebook page.

How messy is your kitchen today?