Going to work used to be a deadly experience for me.

I was in my 20s working for a monthly magazine about comic books, video games and pop culture. The bulk of the staff was guys. All of us big fanboys (a.k.a. geeks) pretty fresh out of college. It was a fantastic time but I lived in fear every single day.

See, the staff loved to play practical jokes on each other. The editorial team would prank the designers. The comic magazine would prank the gaming magazine. Nobody was safe.

Now these aren’t just silly prank phone call type of jokes. Uh uh. These were hardcore, up-all-night-to-set-up jokes. Like what, you ask?

Covering an entire office in aluminum foil. No, not just the walls, but every single thing in the office. The chairs. The desks. The staplers. The phones.

Or another time, I couldn’t even walk to my desk because the entire floor was covered with plastic cups filled with water. Most were plain water but a number of cups in the middle contained blue food coloring and spelled out the words: April Fools!

The worst of the worst, though? Those very special brownies left out at the water cooler. The secret ingredient? Yeah, ExLax. Let’s just say there were some seriously long lines at the bathroom that day.

So yes, I’m no stranger to practical jokes. These days, however, I far prefer watching others get pranked. And that’s where a show like truTV’s Impractical Jokers comes into play.

If you haven’t watched the show yet, you’re in for a treat. To cap off the fifth season, truTV is producing a two-hour special live event called Impractical Jokers Live: Nitro Circus Spectacular. This insane season finale is hosted by extreme sports superstar Travis Pastrana and sports the usual prankers Joe, Murr, Q and Sal.

The gang takes on their biggest challenges ever, including two super high-stakes live punishments and a four-part obstacle course. Bad news for them; good news for us viewers!

Airing Thursday, November 3 at 8 pm, the Impractical Jokers Live: Nitro Circus Spectacular will put these jokesters to the ultimate test. Only one will claim victory for ultimate bragging rights and their favorite charities. But there’s even more fun in this spectacular event.

On November 3, truTV.com will be streaming a pre- and post-episode digital show full of loads more fun. Starting at 7:30pm ET (4:30 pm PT), a pre-show will feature loads of featured guests, exclusive videos and some big surprises leading into the big live event. Then immediately after the live special, all four Jokers will sit down with the truTV.com post-show crew for an exclusive interview discussing the live show and even answering questions from fans submitted via social media.

Who’ll get punished on Impractical Jokers Live: Nitro Circus Spectacular?  For the first time ever, the fans get to decide!  You can vote using the hashtags #Fanshavethelastlaugh and #PunishJoe#PunishMurr #PunishQ #PunishSal.

Win a $50 Visa Gift Card
Plus, an Impractical Jokers T-shirt 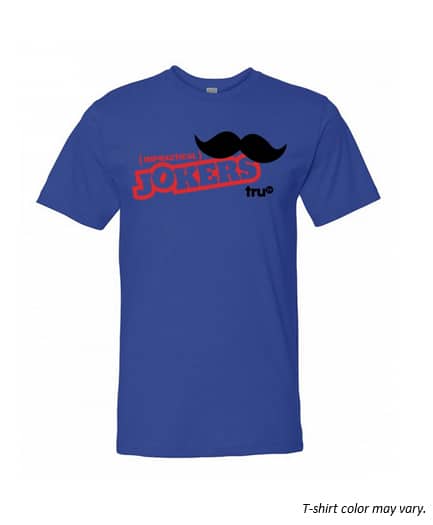 Giveaway ends on November 1, 2016 at 11:59 p.m. ET. The 1 winner will be chosen at random and announced on this site. Giveaway is open only to legal residents of the United States (including District of Columbia), who are at least eighteen (18) years old at the time of entry. The 1 Winner will be notified by email and have 24 hours to respond or a new winner will be chosen. Prizing courtesy of truTV.