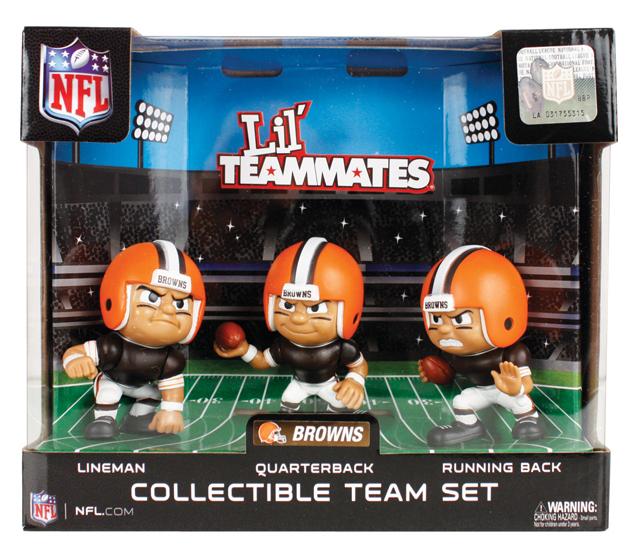 We’re almost halfway through another crazy NFL season and seriously, this year is nuttier than ever. There are so many teams that are just playing pretty poorly that at this stage of the game, it’s anybody’s guess who’s going to the Super Bowl! (Except for the Jets, of course. Haw haw!)

Back in August, I wrote a review about Teenymates‘ adorable collectible football figures. Apparently I wasn’t the only one who loved these little pigskin players, because the company’s got a new line called Lil’ Teammates. These guys are a lot bigger and feature a little bit of articulation so you can move their arms, hips, or heads around.

What I really like is that you can get a Collectible Team Set complete with a quarterback, running back, and lineman. Party Animal Toys knew I was a fan so they sent me off a sample of the Pittsburgh Steelers set.

Ain’t these the cutest little Black and Yellow buggers?

They’re definitely a lot of fun and I think the Lineman is my favorite, because with a slight twist, you can set him in a three-point stance! Too neat.

My friends over at Party Animal Toys were kind enough to offer up a collectible team set to 2 Lucky Winners on Mommy’s Busy… Go Ask Daddy! Winners can choose the set they’d like!
Win a Lil’ Teammates Collectible Team Set
(2 Winners! Choose Your Team!)

Giveaway ends on November 7, 2012 at 11:59 p.m. The 3 winners will be chosen at random and announced on this site. Giveaway is open only to legal residents of the fifty (50) United States (including District of Columbia) who are at least eighteen (18) years old at the time of entry. The Winner will be notified by email and has 48 hours to respond or a new winner will be chosen.

I received a set of the featured product in exchange for my honest opinions. The thoughts and opinions expressed in this post are my own and in no way were influenced by the company providing the product.
Share6
Tweet7
Pin
13 Shares