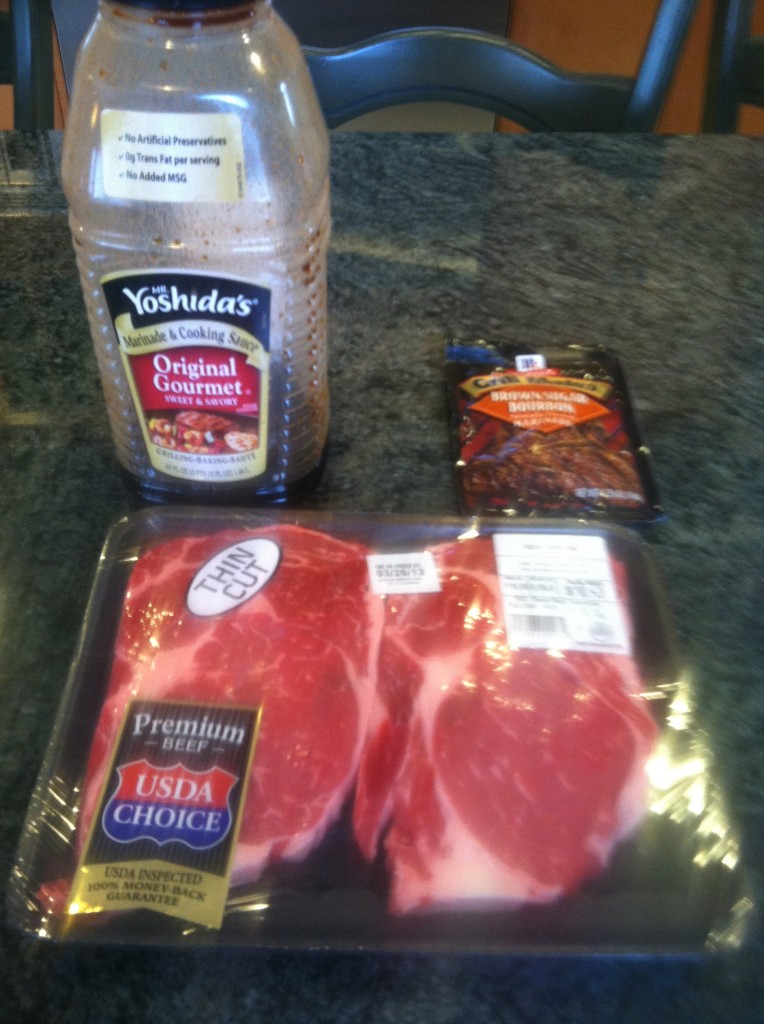 While my favorite foods in the world are probably sushi and pizza, I’m also a big sucker for hot dogs and a really good steak. You know, the kind of steak you need a good sharp knife to cut, but that isn’t too chewy.

I wouldn’t say I’m a typical meat and potato kind of  guy, mainly because I can take or leave potatoes. French fries are good. Mashed are even better. Double stuffed garlic loaded with cheese are even betterer. So when I was asked by Walmart to try out their new line of USDA Choice Premium Steaks, the only real question was, “When can I start?”

I was sent a Walmart gift card to cover expenses for the steak, so I packed the family up and headed north to the Super Walmart up in Monroe. That’s probably the closest one to us that has a huge supermarket in it. We did some shopping, and then wandered over to the butcher’s section where we selected two packages of USDA Choice meat: a package of 2 juicy-looking Ribeye steaks and another package of 3 medium-sized New York Strip steaks.

As part of this promotion, Walmart wanted me to participate in a grill off! I decided to take on one of the best cooks I know: my wife. We split the steaks up evenly and each used a different marinade. 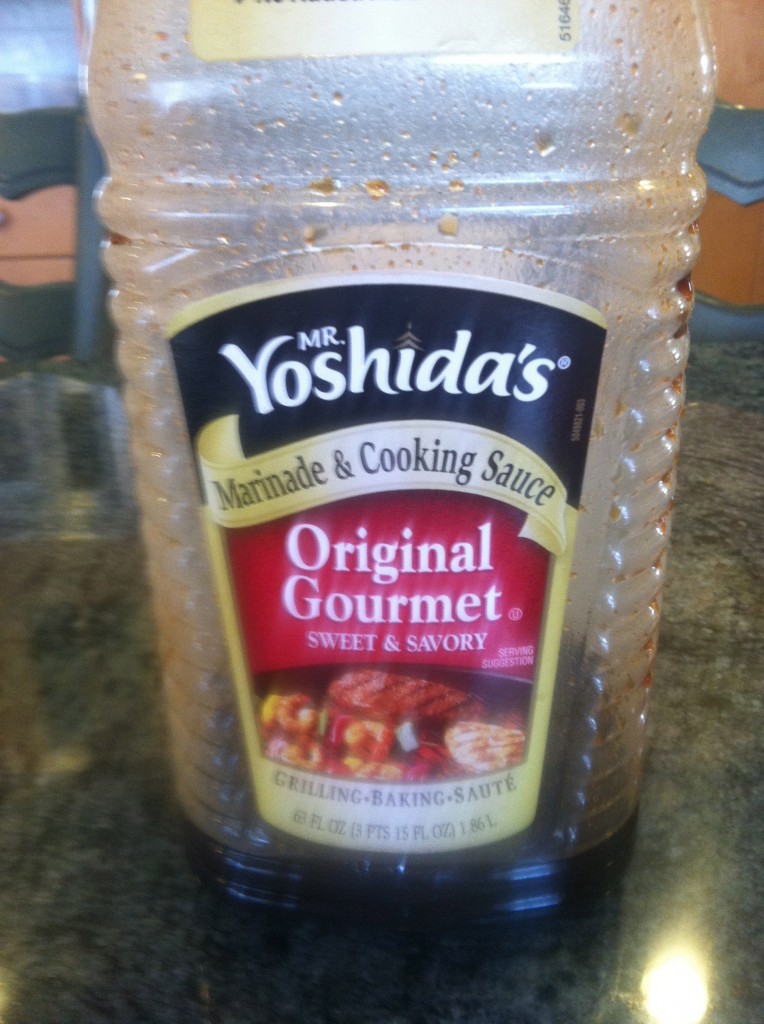 For my steaks, I went with the traditional marinade we always use, Yoshida’s Sauce. It’s like a sweet, thick Teriyaki sauce. I poked a few holes with a fork in my ribeye and the 1 1/2 New York Strips steaks, tossed them in a ziplock bag and poured in enough Yoshida sauce to cover all the meat. I then dug my hands in and mixed it all together. Allie, on the other hand, decided to go with a Brown Sugar Bourbon marinade packet from McCormick’s line of Grill Mates. 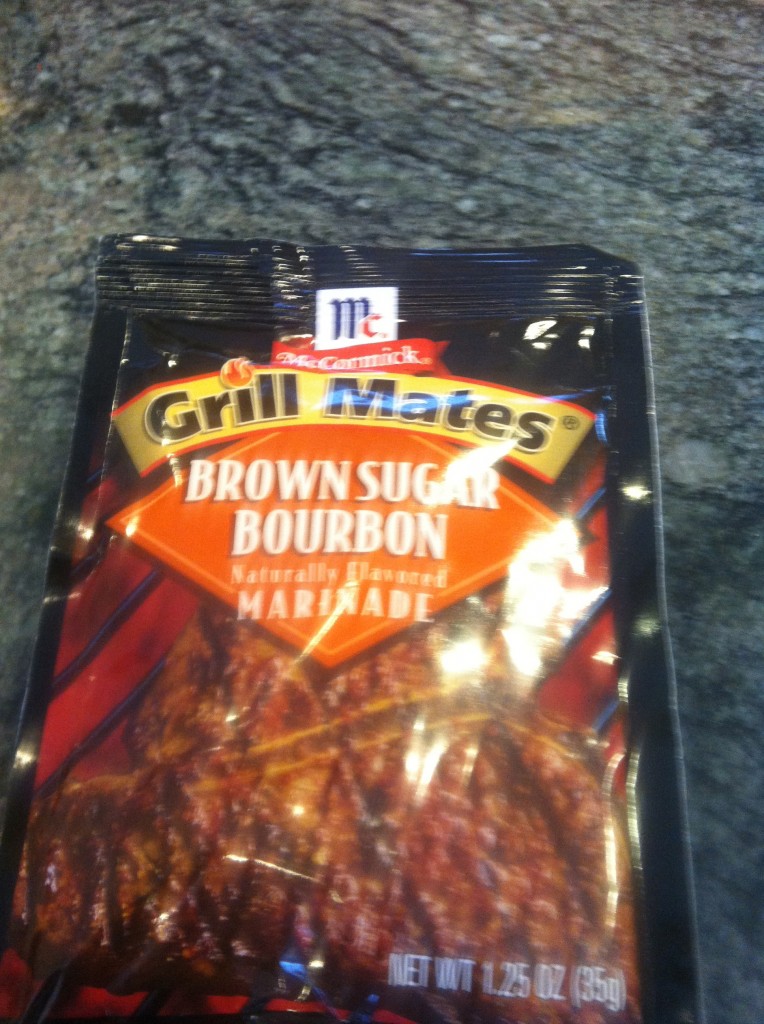 Allie poked holes in her meat as well, then poured the marinade into the bag and mushed it up a bit too. We put both bags in the fridge for a few hours to let them… well, marinate. At dinner time, I warmed up the grill and threw all the steaks on the barbecue. My Yoshida’s are on the left, while Allie’s Brown Sugar Bourbon ones took up the right half. 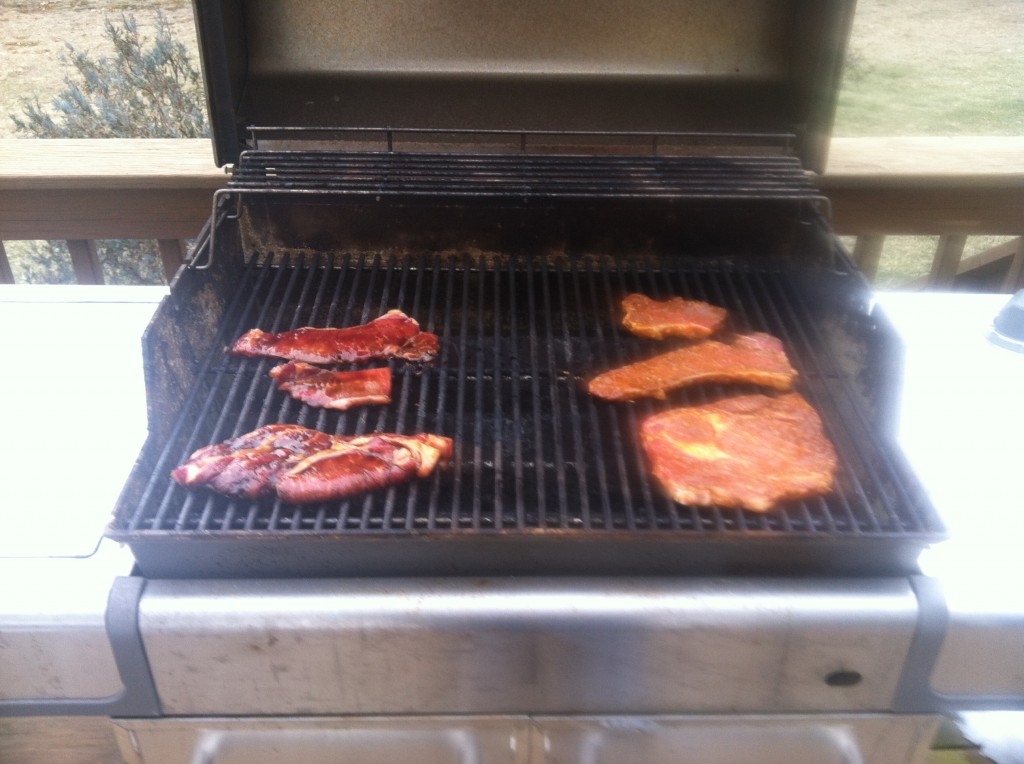 You can see the Ribeyes up in front, and the smaller New York Strip steaks behind. They actually didn’t take too long to cook, maybe 10-15 minutes tops. I made sure to flip them halfway through, and poured excess marinade over them all.

How’d they come out? Let’s take a look!

First up is my sure-to-win Yoshida’s steak. Just looking at these, I couldn’t wait to sink my teeth into the Ribeye! 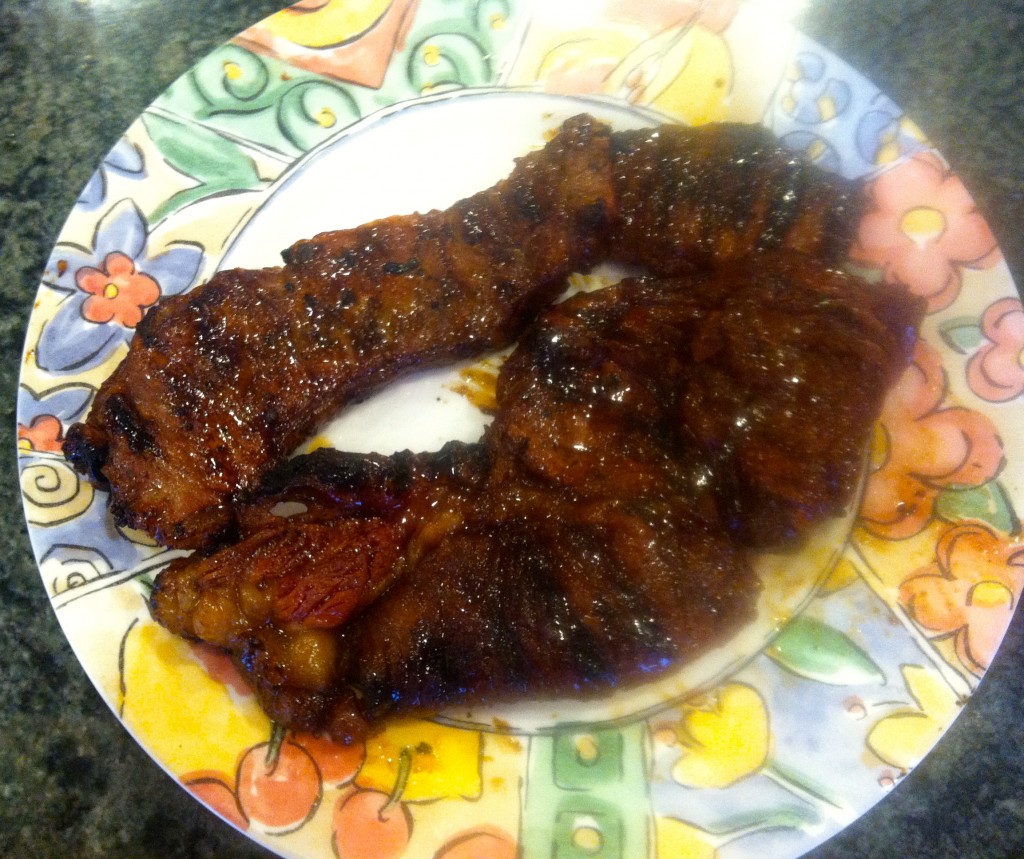 And how did Allie’s come out? Pretty sweet looking as well! 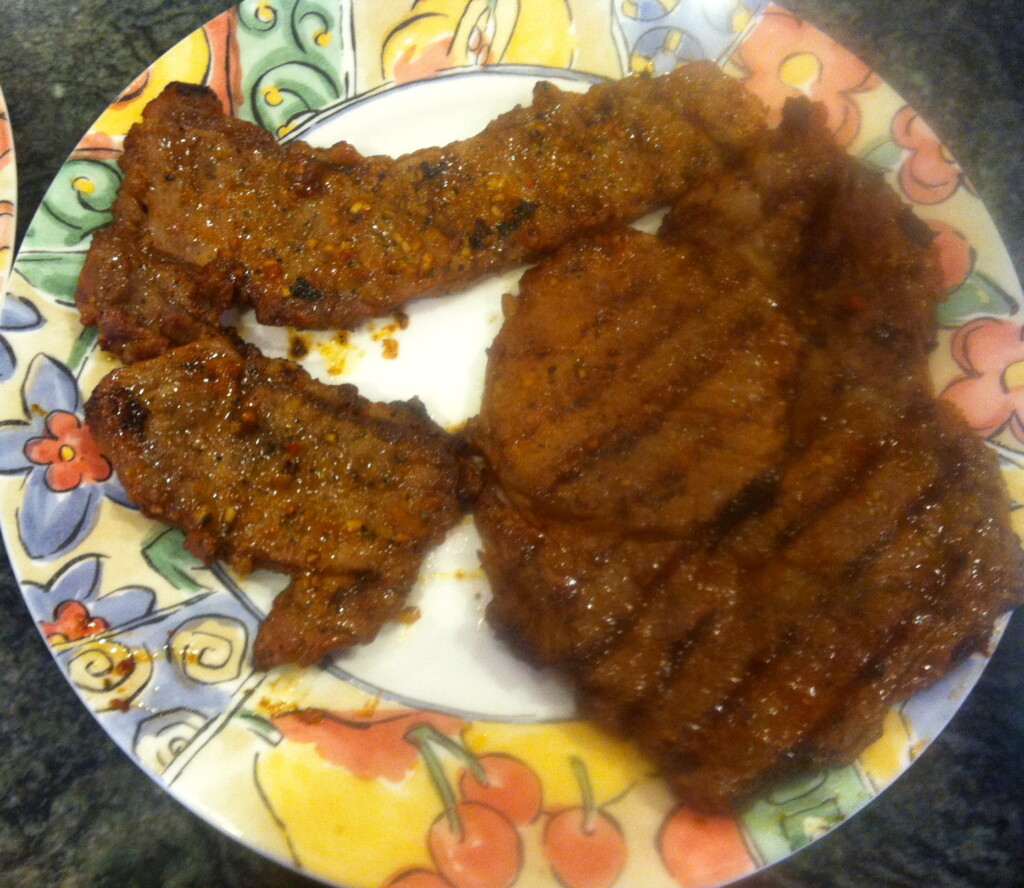 You can see all the herbs and spices clearly on the New York Strip pieces. And while you can’t tell because you’re looking at a computer screen, Allie’s steaks smelled AMAZING! Like drool-inducing good. Mine smelled good too, but more like a regular steak. Her’s had this sweet, grilled smell to it.

I had a feeling there weren’t going to be any losers in this battle! While I was manning the grill, Allie was busy working on the sides, mainly broccoli and sweet potatoes. Everything was finished about the same time, so I plated the meal (that’s a fancy term I learned from the Iron Chef that just means putting all the food on a plate in a fancy display). We’re nothing if not color aware. 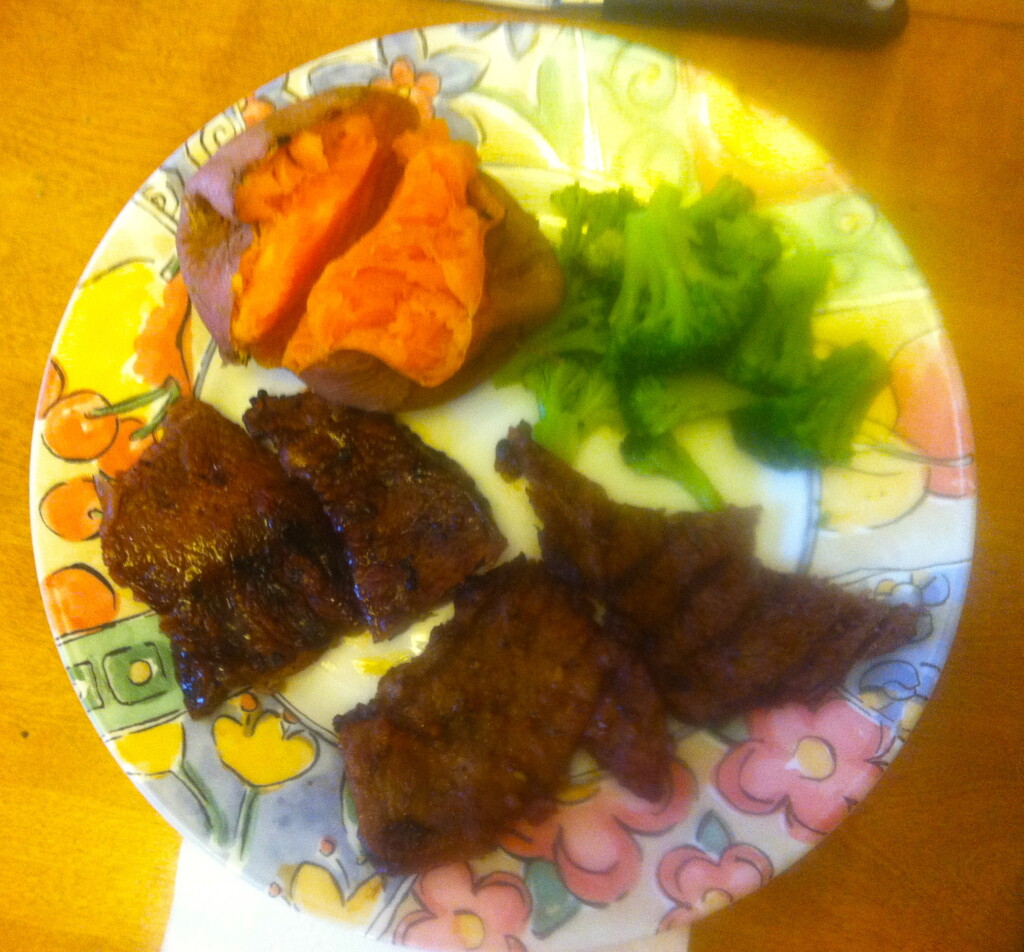 We each got to try all four different steaks. Both versions of the Ribeye, and both versions of the New York Strip. We figured that was the best way to see which of the two steaks we preferred, as well as which marinade we liked better. The tension was definitely mounting, as was our hunger thanks to the smells! 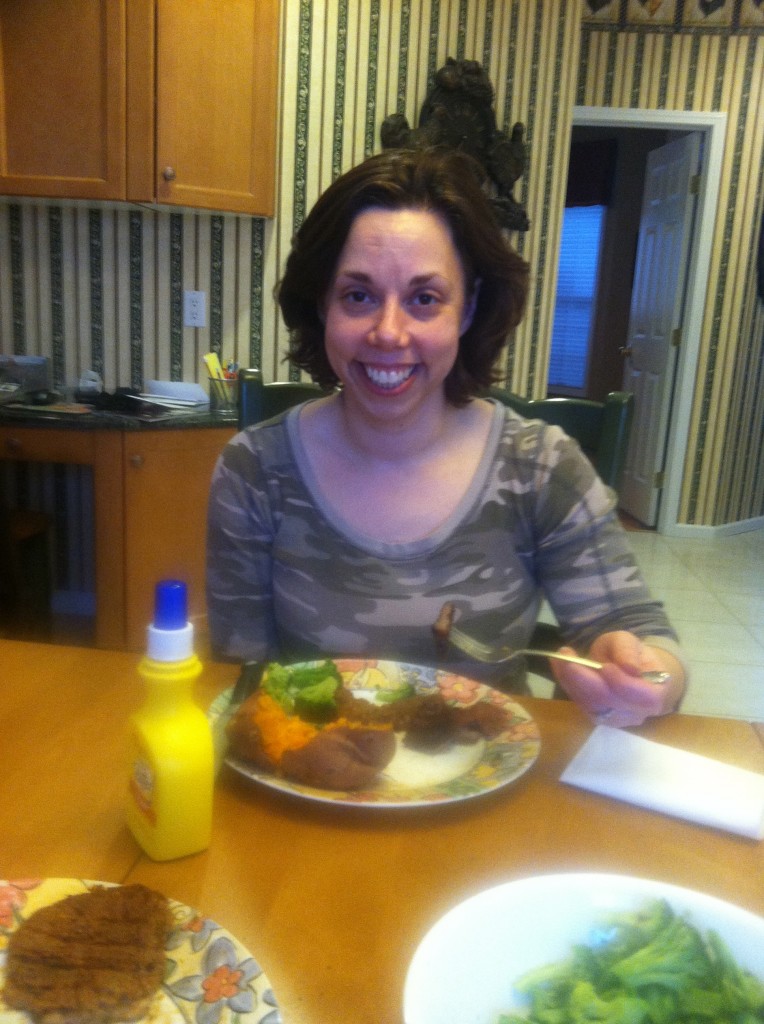 We dug in together and I have to say, they were all unbelievably good. Both marinades were tasteastic and both steaks were really delicious. I honestly didn’t expect much in terms of steak from a place like Walmart, but I was most definitely pleasantly surprised. 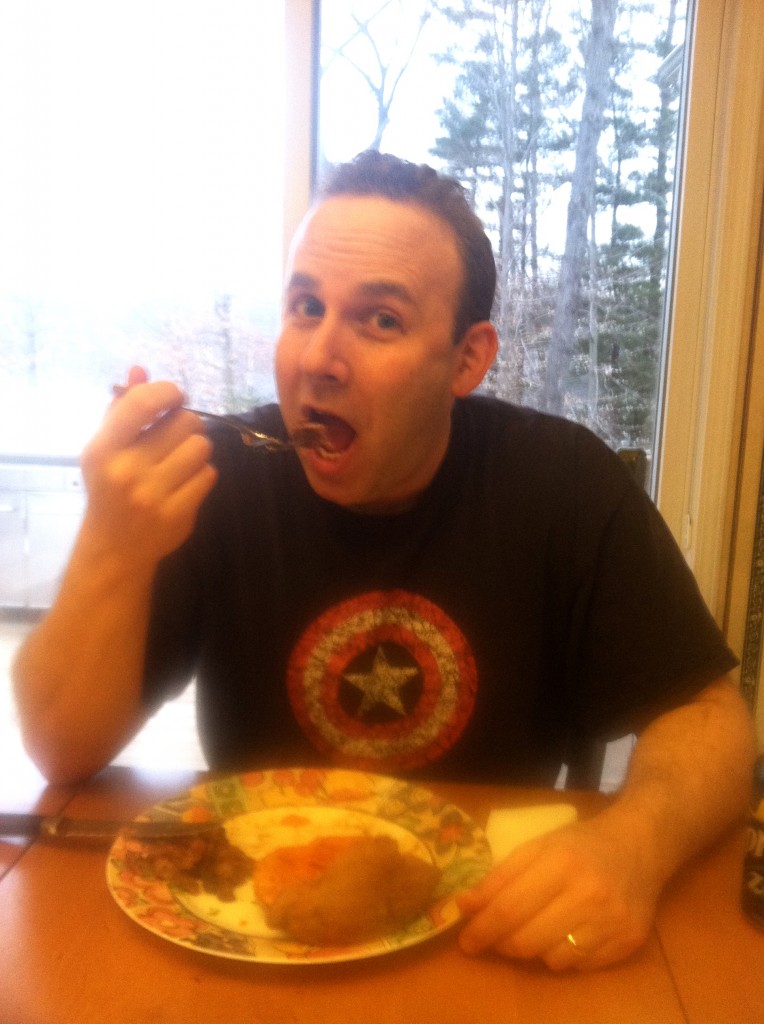 We kept flip-flopping in terms of what we liked better. We definitely both enjoyed the New York Strip steaks better than the Ribeyes, which surprised me a bit. The NY Strip was just a little bit softer and less chewy, that’s what gave it the edge.

As for the marinades, I went back and forth, as did Allie. The two tastes were very different. In the end, though, as my good friend Connor McCloud says, “There can be only one.”

We ultimately decided that the Yoshida’s marinade on the New York Strip was the best. The Bourbon was great, but only in smaller quantities. Eating a lot of that marinade started getting a little bit “too much” in terms of the sweet flavor. It’d be absolutely perfect for any sort of appetizer or finger food.

I proudly accepted my grilling trophy and would’ve finished eating all the steak if Allie didn’t stop me. Which I’m glad she did because it made for some great leftovers the next day!

Would I recommend Walmart’s new line of USDA Choice Premium Beef? Absolutely! And if you do give it a try yourself, I’ll even make the ultimate sacrifice and volunteer myself to help be a taste tester. 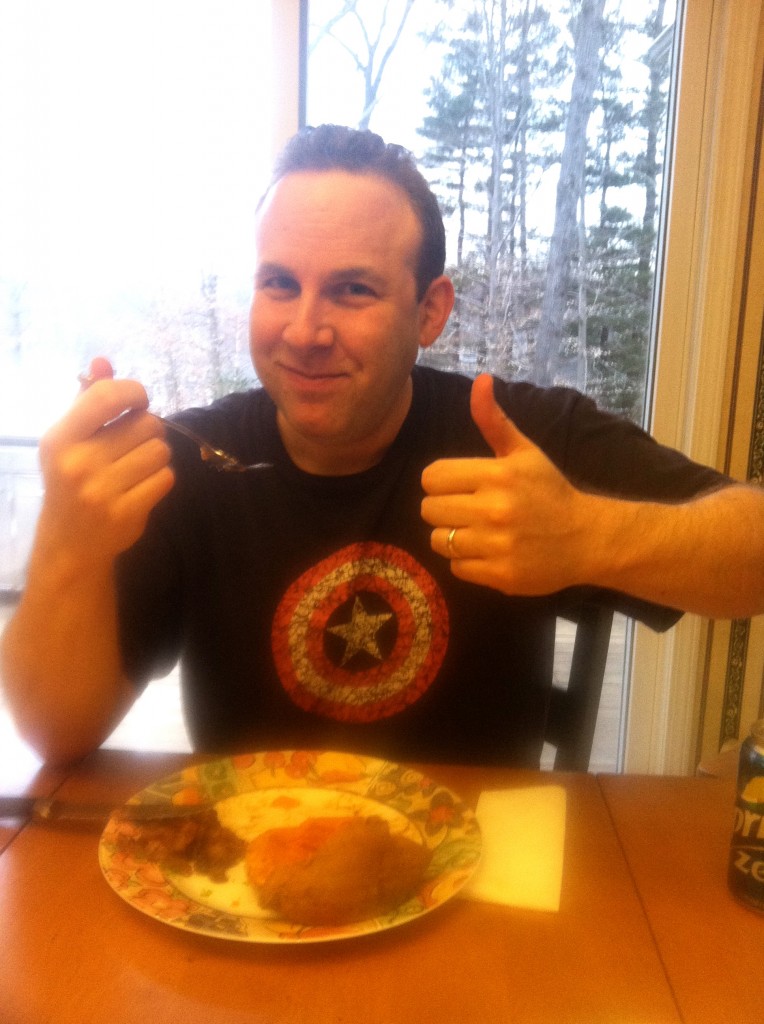 Are you ready to experience Walmart’s Steak-Over for yourself? Find out why you should choose your steaks at Walmart here. We shared our winning grilling tip – now tell us yours!

This is a sponsored conversation written by me on behalf of Walmart. The opinions and text are all mine.