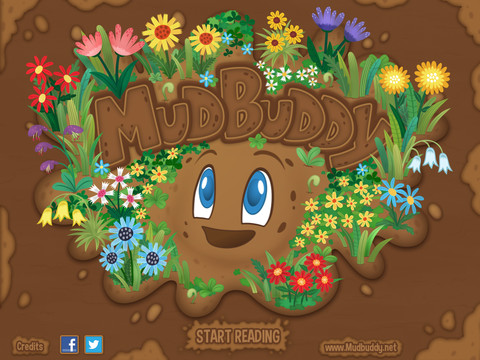 When I was a kid, I had this little Disney phonograph. It was a small blue plastic case that opened up to reveal a small record player inside. There was a big picture of Pluto on the front and the arm of the player that you move to play the record was actually in the shape of a dog bone.

But the one other thing I recall fondly about my record player was this Book & Record set I had. It was a 45 rpm record that went with an included Captain America comic book. (It was Captain America #168 for those of you keeping score at home. Great issue!) The record was just a narrative of the story, complete with different voices for each character and all sorts of related sound effects. Yeah, it was my first “book on tape” basically and I couldn’t get enough of it.

Nowadays, the only record my kids seem to know about is the current high score in Mario Kart. But thanks to some fantastic advances in technology, something as awesome as an iPad can bring just as much joy and entertainment to young kids as my little Pluto phonograph did for me.

I was asked to review a new book reading app called MudBuddy and if this is the future of reading for young kids, I think they’re in pretty good hands. MudBuddy tells the story of a little guy made of mud who tries to find his place in life. He’s dull, brown and doesn’t seem to do anything. So he goes on a quest to learn more about himself and finds some surprisingly wonderful things about himself after interacting with his friend Worm, a talking rock and plenty of other creatures of nature.

The story itself is easy enough for real young kids to follow along and with plenty of humorous situations, they’ll certainly be entertained. The artwork is both vibrant, cute and engaging. MudBuddy and his pals are just cute li’l guys who you’d probably love to spend an afternoon hanging out with in your backyard. Though, beware of too many hugs, or you’ll certainly need a long hot bath afterwards.

It’s the delivery of MudBuddy, though, that impressed me the most. I’ve seen children’s books on the iPad before and they translate fine but they don’t do more than just offer a different way to read the book. MudBuddy, however, takes advantage of the iPad’s technology to go beyond that. Happy background music softly plays throughout, giving a nice friendly overwhelming feeling via a “soundtrack.” There’s even some slick animation throughout. No, it’s not a cartoon or anything, but as you turn pages, some will zoom in to larger areas and at one point MudBuddy kept pointing impatiently to the lower right corner, encouraging me to move on to the next page. 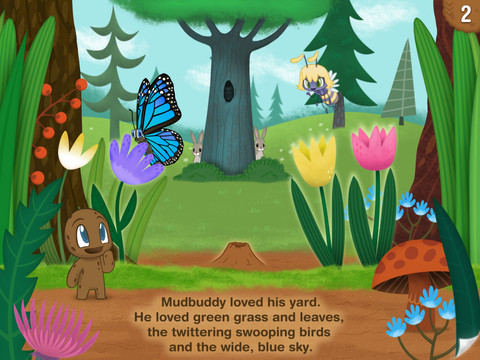 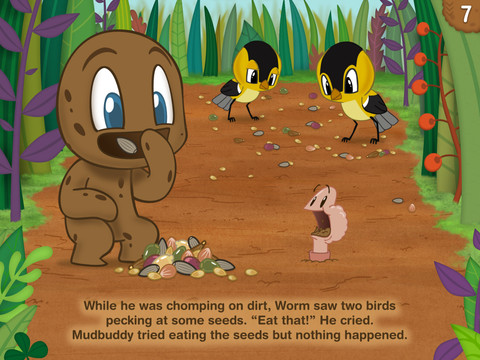 You can choose to listen to the book as a narrator reads the entire thing, changing up voices for each character. He’s got a great voice that’s engaging and fun enough to keep you wondering what’s happening next. If you’d rather turn off the narrator and read it yourself, just click one button and you’re there.

The simplicity of the menu is great for young kids (and grandparents too!), as a slide-down menu simply lets you jump to any page in the book and turn on/off the narrator. That’s it. Nothing else to get in the way or cause any confusion. 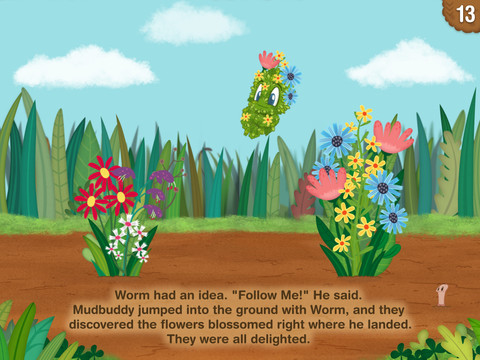 This is the first of hopefully many books in the MudBuddy series. Hopefully it will encourage parents to head out to their own backyard with their kids and start exploring nature in a fun, hands-on way. In fact, after yesterday’s massive rainstorm here in NY, I think I may just find MudBuddy and his entire extended family out back!

You can download MudBuddy for just $1.99 in the Apple App Store.

This post was brought to you by MudBuddy. The thoughts and opinions expressed in this post are my own and in no way were influenced by the company sponsoring this post.