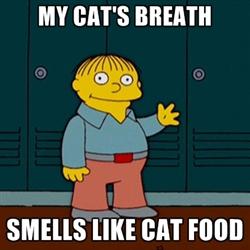 I’ve never owned a cat. Nope, I’m definitely more of a dog person. Though I have spent some time with cats. And I don’t just mean Garfield and Friends. (One of Ryan’s favorite cartoons these days.)

In college, Allie did an internship at Project Paw, a local animal shelter in Broome County, NY. I went with her a few times to help out. The place was huge and filled with tons and tons and tons of cats. Did I mention they had a lot of cats?

Anyways, they needed people to come help clean out the huge cages and feed the cats. The cages were real big with probably a dozen or so cats in each with lots of room to run around. Most of all, though, Project Paw was ecstatic to just have us come and play with the cats.

So I did that a number of times with some of my friends. I’m not a fan of cleaning out the cat litter (is anyone?), but I did like opening up all of that canned cat food. The second those feisty felines heard a can opening, they’d perk up and start meowing like no tomorrow. I was like Superman come to save the day when I brought them their food.

I guess all cats are like that, though. I’ve had many friends who’d tell me similar stories. Their cat would be nowhere in site (probably chasing dust bunnies in the attic) and he’d just start peeling the lid off the cat food can. Before you could blink, Pee Wee would be sitting on the stove meowing impatiently.

I know certain foods are actually harmful to animals (keep chocolate away from dogs and ferns away from cats!), but when you’re out shopping for canned cat food, you really need to look at the complete nutrition in each one. Besides not being that healthy, some of the cheaper brands can have some incredibly frightening items listed in their ingredients. We’re talking Walking Dead scary.

Yes, cats apparently do have nine lives, but do you really want them wasting eight of them on gross and unhealthy cat food? Definitely not. It’s much cooler when they leap out of 10 story buildings, do a triple flip and defiantly land on their feet.

So be nice to your feline friend. Spend a few extra cents to get the good stuff. The kind of cat food that revs up their purring engine properly. And if you think it really doesn’t matter what you feed your cat, just remember this: they know where you sleep.

What do you feed your cat?

This post was brought to you by Whiskas. The thoughts and opinions expressed in this post are my own and in no way were influenced by the company. No animals were harmed in the writing of this post. Except for that one cat who got offended when I said I’m a dog person.

3 thoughts on “My Cat’s Breath Smells Like Cat Food”