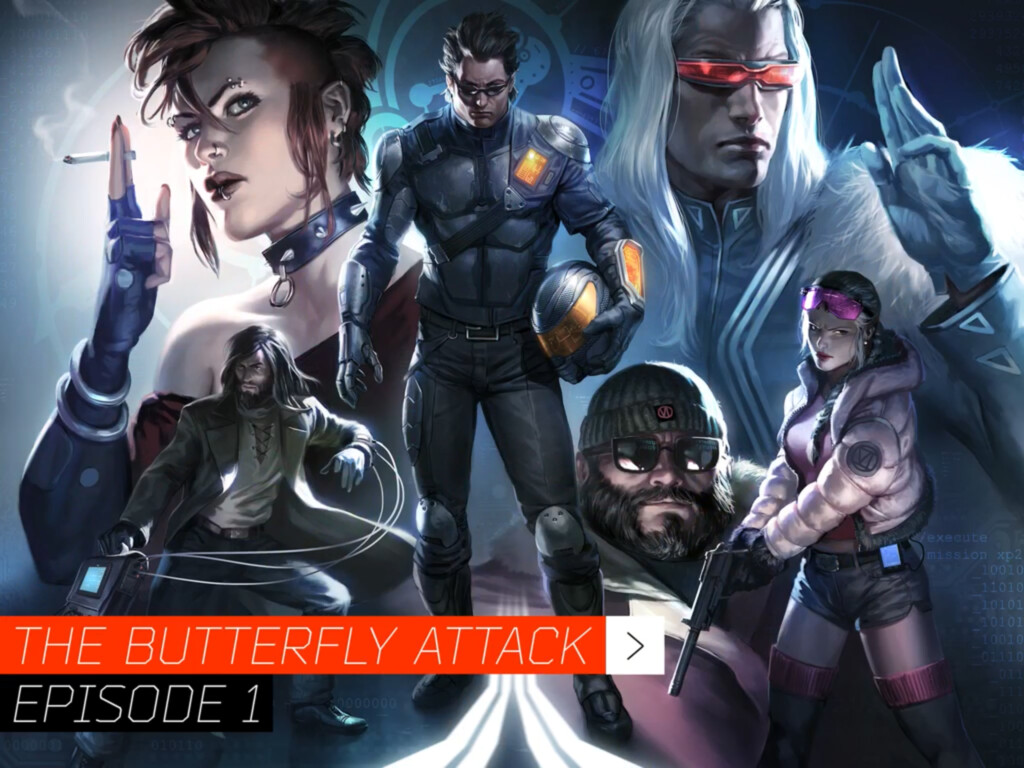 I’m still one of those old-school fanboys who likes to sit on the couch with a comic book in hand. I even prefer graphic novels so I can read a ton of issues at once. I just can’t sit and read one issue of a comic at a time, especially since they take all of five minutes to read. If that.

I know digital comics are starting to take hold a bit, but I just can’t seem to get into them. To me, if you’re going to go digital, it needs to be more than just basically scanned-in artwork. Moving panel to panel is neat but not really enough to get me hooked.

That’s what’s so incredibly intriguing about the new interactive graphic novel app Netwars – The Butterfly Attack. See, this isn’t just a comic book, it’s an entire multi-media experience that crosses over to the Web, including videos.

The modern day battleground is no longer on land, it’s on the web – This is Netwars. The Butterfly Attack is the latest installment of Netwars: Out of CTRL, a cross-platform fact-based multimedia experience that uses fictional characters to explore the very real threat of digital warfare in today’s technologically driven and digitally connected world.

Written by award-winning British novelist and screenplay writer M. Sean Coleman and created by the German production company filmtank, The Butterfly Attack is a graphic novel app for iOS and Android. Combining true facts with actual events, The Butterfly Attack is a captivating and visually stunning fictional story about a team of hackers hired to conduct a mock cyberwar game that goes terribly wrong. 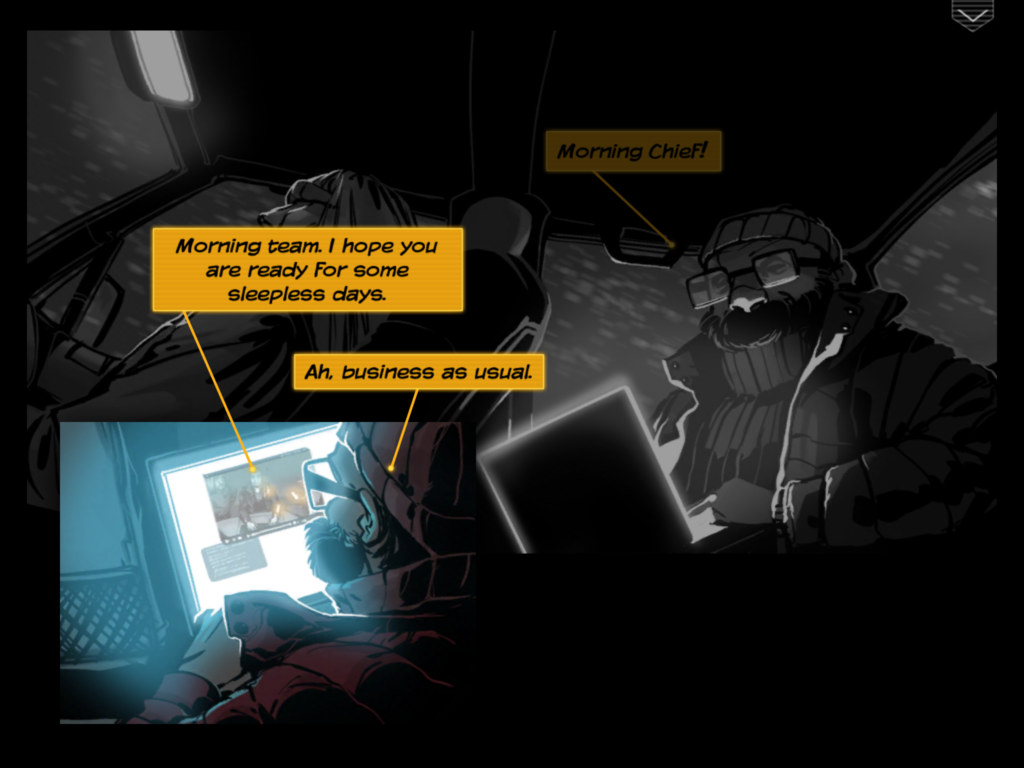 Set in the near future, the story is very comic book-like. A cyber security team takes on a new client, setting up a “War Games” type of scenario just to show off how good their system really is. But when the test begins, things take a turn for the serious and not everything (or everyone) is what it seems.

The story itself is pretty neat and it certainly sets things up nicely for the second and third episodes due out later this summer. It has a sort of Bourne Identity or Mission Impossible type of feel to it. But what’s really neat is that it’s not a straight-forward comic book story.

You read The Butterfly Attack by swiping your touchscreen to the left. Swipe it right to go back if you’d like., By swiping, you either change pages, add new panels as overlays or just cause new word balloons to appear. It’s all very fluid and a bit more animated in flow than standard digital comics. 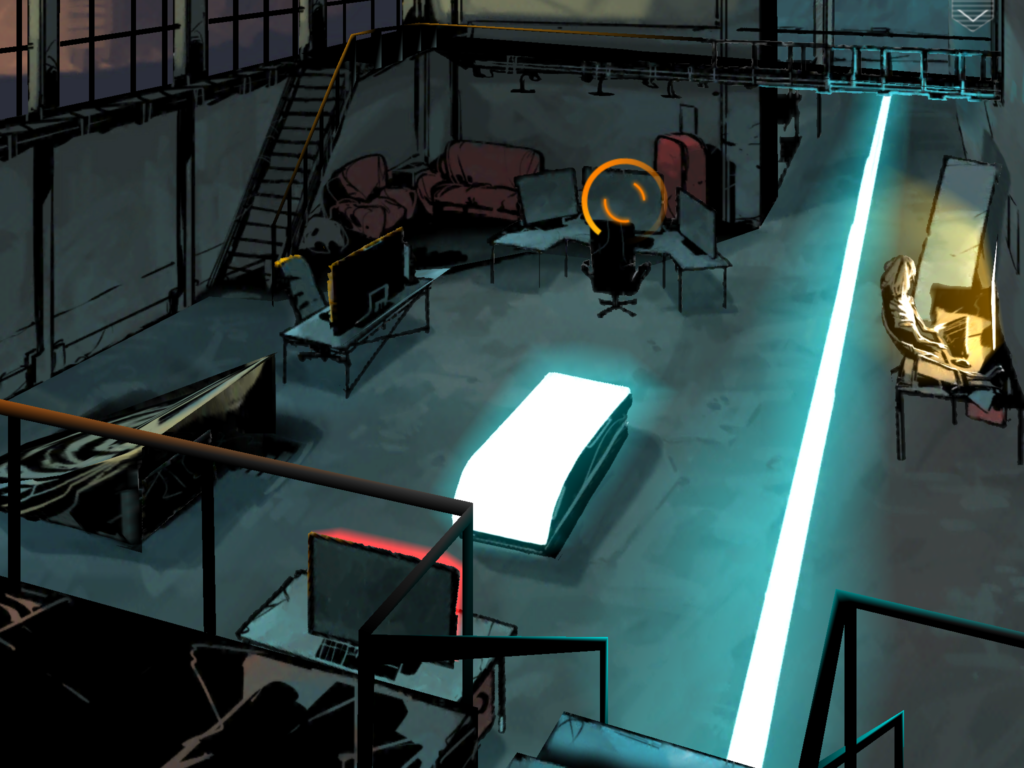 The part that really works for me, though, is the added features. On certain screens you’ll see various icons that either give you information or activate scenarios. The information button launches some sort of file that you can click on and read in more detail about various cyber attacks or resources. The file is saved in your file area, so you can easily get to it and re-read it any time you want.

The special Event icons will pop up neat little additions to the story. See a cell phone with the event icon on it? Just touch it and suddenly a popup will show you the latest text message, giving some real interesting background info to help move the story along. 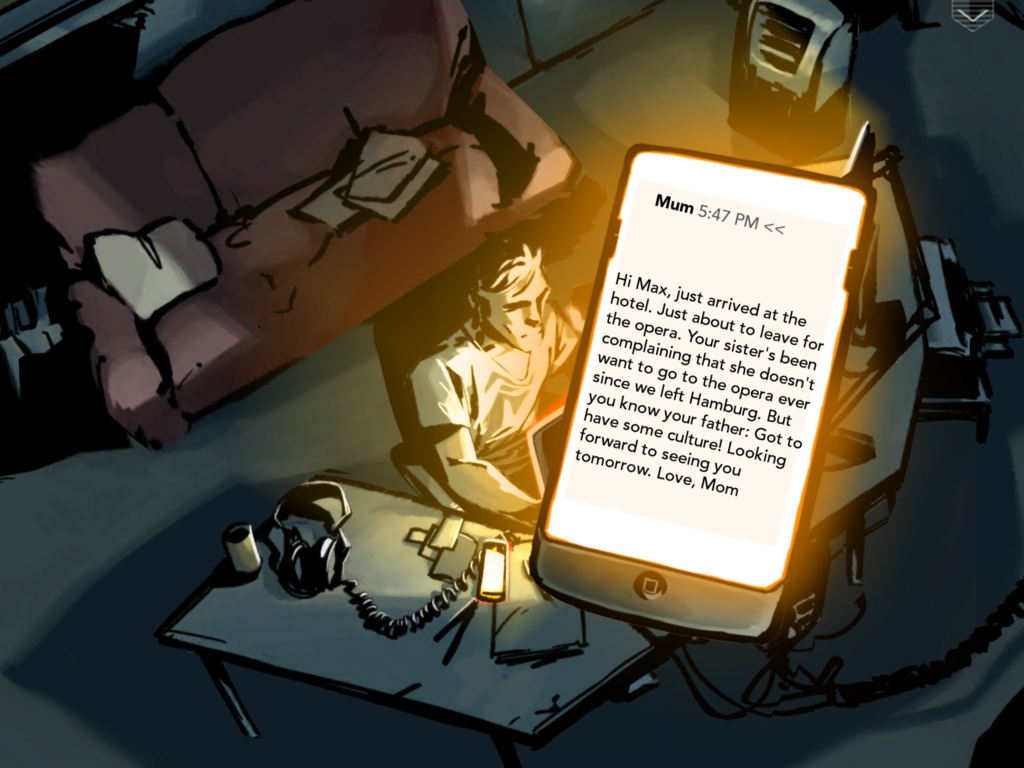 There’s also a pretty cool use of 3D in The Butterfly Attack app. At times, you’ll enter a room that’s displayed in 3D. You can tilt your device back and forth or side to side and see more of the room. You actually need to do this sometimes to find various event or information icons that you wouldn’t otherwise see.

Take all of this technology mixed with a cyber-attack storyline and you start to feel immersed in the story itself. What pushes this to the next level for me, though, is that within the app are various links that can send you to realistic Web pages furthering the story along. I really love when a movie or book creates a website that acts as if it’s a real site for a fictional company or character. There are even a number of videos you can jump to while playing that help keep the story going. 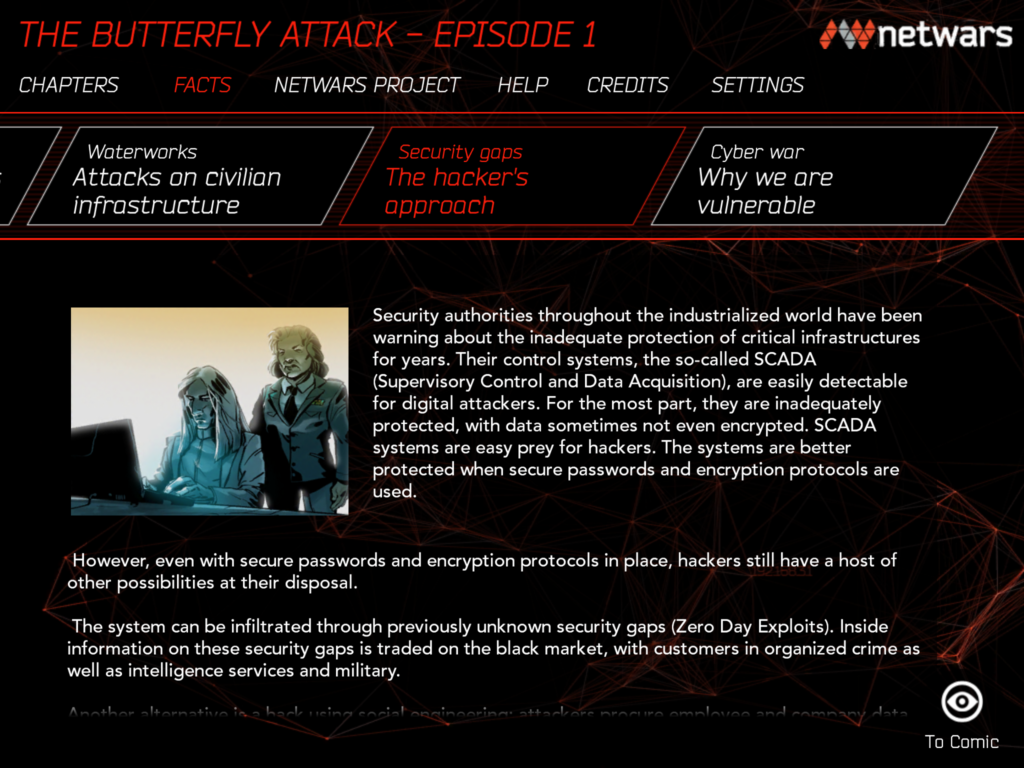 I should point out that Netwars is not for kids. The story’s not something they’d easily grasp anyways, but the first episode did contain multiple uses of profanity. So not really something for the younger crowd, though teens should be fine with it.

Netwars – The Butterfly Attack is definitely a step in the right direction in terms of interactive graphic novels. I’d love to see this platform continue with more stories from Bastei Entertainment, but also license the technology out to guys like Marvel and DC. I can so easily see a S.H.I.E.L.D. or Captain America type of interactive story working beautifully in this environment!

For now though, I’m real curious to see the next two installments of The Butterfly Attack, as the story definitely sets up a real suspenseful tale.

Netwars – The Butterfly Attack – Episode 1
iOS and Droid platforms for $2.99 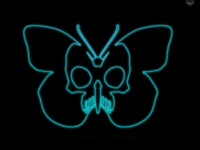