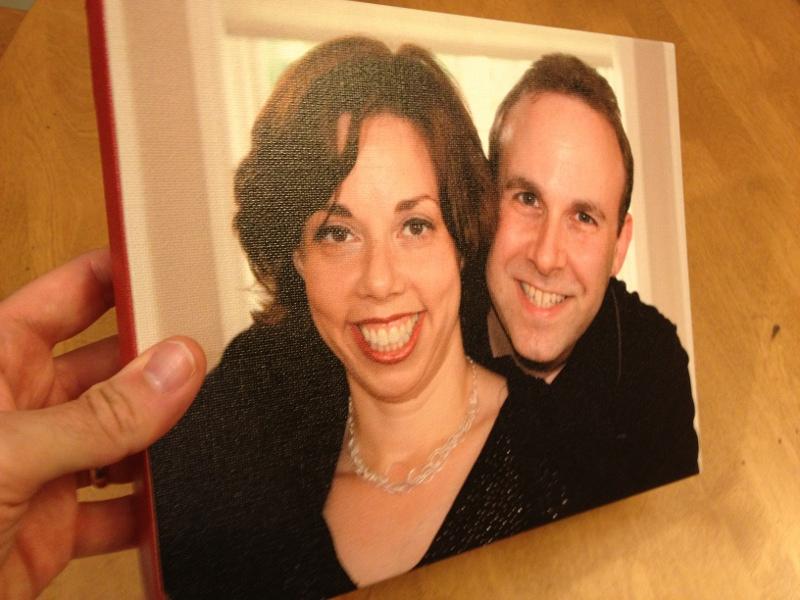 It really amazes me how far things have come in recent years with digital photos. Cell phones now have way better resolutions than full-fledged digital cameras I used to buy a few years ago. And while I love flipping through online albums or finding pics on my phone, there’s just nothing like a nice physical photo tucked in a frame.

Photographs really can make a home. They just add a sense of coziness, don’t they?

We used to get tons of film developed (remember doing that in the old days at the local drugstore?) and then cross our fingers hoping that at least half of the pictures would come out in focus. That’s the great thing about digital, no wasted film!

One thing I’ve always wanted to try but never got around to is making a canvas print of one of my photos. So when Printcopia approached me to try out their service, I took it in a flash. Flash, get it? Cameras have flashes and… never mind…

My wife picked out a nice photo of the two of us, and then I dove into the easy-to-navigate site. You simply pick your size and then go through a number of options like border styles, display options, color finishing, image retouching, and more. With a real simple interface, you’ll quickly see exactly what your photo will look like as a custom canvas print.

The real test would be in the quality of the canvas print, though. And I’m happy to say that Allie and I were thrilled with the quality when it arrived. We both just love it. The picture is crisp and colorful and we couldn’t be happier.

The one thing we didn’t like, though? We don’t know where to hang it!

Giveaway ends on November 15, 2012 at 11:59 p.m. The 3 winners will be chosen at random and announced on this site. Giveaway is open only to legal residents of the fifty (50) United States (including District of Columbia) who are at least eighteen (18) years old at the time of entry. The Winner will be notified by email and has 48 hours to respond or a new winner will be chosen.