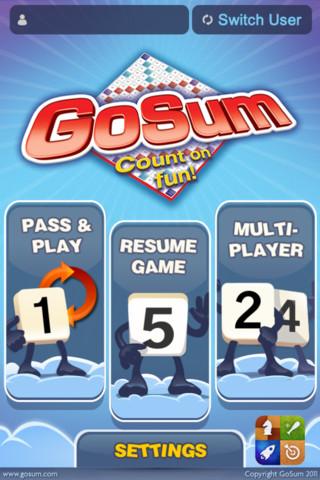 In college I was really torn about what direction to go in. Most people are either left brained or right brained. They’re either analytic or creative. Me? I’m both. I was seriously not sure whether to go for an English degree or a Math one. I loved solving math problems (big fan of puzzles), but I’ve also always had a huge love of writing.

Maybe it’s because I’m a Gemini. The whole two-faced thing. My birthday also happens to fall on June 2. Another 2. And while I write with my right hand, when I play baseball, I bat lefty. Anyways, I did end up following the English path and went on to a career in Journalism. (That super boring Statistics 101 class pushed me over the edge.)

I still love solving math puzzles and playing games. So I was crazy excited to try out this new iPhone app called GoSum, which essentially combines my two favorites in one. Scrabble’s the ultimate game for us English nerds, even though I’m terrible at it. But what if you replace all the letter tiles with numbers and mathematical equations instead? Yeah, that pretty much sums up (hah, see what I did there?), GoSum.

I love playing Words With Friends on my iPhone, and play it all the time with my wife and even my kids! (No, my kids don’t have iPhones. Relax! They do have iTouches, though.) GoSum is smilar in gameplay, but lets you play with 2, 3, or even 4 players at once. You can even play against anyone in the entire world! No Google Translate necessary.

There are tiles for addition, subtraction, multiplication, and division, as well as lots and lots of numbers. On your turn, you simply lay down tiles to form a valid equation, scoring points for the different numbers used. There are even double and triple number squares, and sum squares. 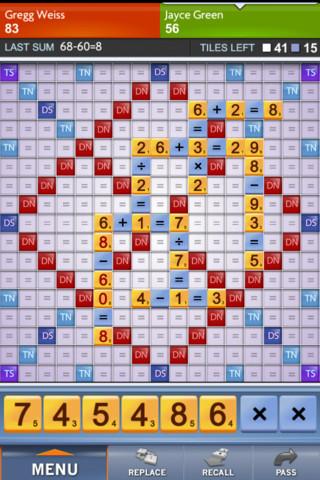 The basic gameplay was real easy to get into, and my wife and I played for awhile last night. Personally, I need a bit more time to completely get immersed in it. It’s super easy to toss out a 6+2=8 equation, but I’m all about spending 15 minutes staring at the board and tiles to come up with the craziest equation possible. That’s the beauty of this game. It’s simplistic enough to play with your 7 year old, but open enough to have a hardcore math nerdathon too.

There is a free version available, though I’ll warn you it’s overflowing with ads. The alternative is spending a whopping $0.99 for the paid app on your iPhone (or $2.99 for the iPad). That’s way cheaper than a cup of coffee, and it sure won’t burn the roof of your mouth! You can either play with someone far away (if you each have the app), or simply use the Pass-and-Play mode to play against each other in the same room. Facebook integration makes it real easy to hook up with your friends.

If you’re looking for a fun social game to play with your friends, and you’re sick of forming words, give GoSum a try. Go on, make your ol’ Math teacher proud!

This post was sponsored by the fine folks over at GoSum. The thoughts and opinions expressed in this post are my own and in no way were influenced by the company providing the product.