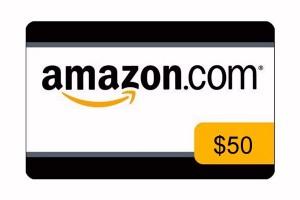 So I got myself a $50 Amazon Gift Card for doing nothing more than being signed up for IZEA‘s ad network. They’re the colorful company that provides the spiffy 300 x 250 ads you see to the right over there.

Apparently they had some major issues last week when one of the third party advertisers they use started serving up some pretty bad ads. Not bad like those “dancing shadows for low interest rate” ads. Those are just ridiculous. I mean bad as in they were potentially harmful to your computer with their malware kind of bad.

What’s worse, many sites must’ve been crawled by Google while serving up that ad and were instantly flagged by Google. Trust me, nobody wants Google to think ill of them. IZEA did respond quickly to the issue, removed the third party advertiser and tried working closely with all those bloggers who were horribly affected.

Thankfully, it didn’t hit Mommy’s Busy… Go Ask Daddy. I did serve up the ad and even saw it once or twice, but thankfully Google missed it. So hopefully it only scared off a few of my readers. If you were one of them, you have my most sincere apologies!

Now, in a great gesture from IZEA, the company has randomly given out a ton of $50 Amazon Gift Cards for bloggers, as a sort of an apology. The gift cards are meant to be used as giveaway prizes to appease the frustrated readers out there. I’m curious what percentage of bloggers will actually do that versus just keeping the gift card for themselves. Honestly, I have no clue.

Not to look a gift card horse in the mouth (technically it’s a gift code that will be emailed to you), I’m tossing up a super simple giveaway. What’s more, you don’t have to do a single thing. No commenting necessary. (Though feel free to leave one if you’d like.)

Good luck and, seriously, thank you for checking out my blog!

To Enter: Click the “JUST CLICK ENTER” link in the widget below and then hit ENTER. You can also earn additional entries for sharing, tweeting, commenting, etc.

Giveaway ends on October 16, 2012 at 11:59 p.m. The winner will be chosen at random and announced on this site. Giveaway is open only to legal residents of the fifty (50) United States (including District of Columbia) who are at least eighteen (18) years old at the time of entry. The Winner will be notified by email and has 48 hours to respond or a new winner will be chosen.

I received the prize for the Giveaway from IZEA. The thoughts and opinions expressed in this post are my own and in no way were influenced by the company providing the product.
More Sweeps and Giveaways:
Instant Win
As seen on Hypersweep.com!
Share13
Tweet
Pin
13 Shares