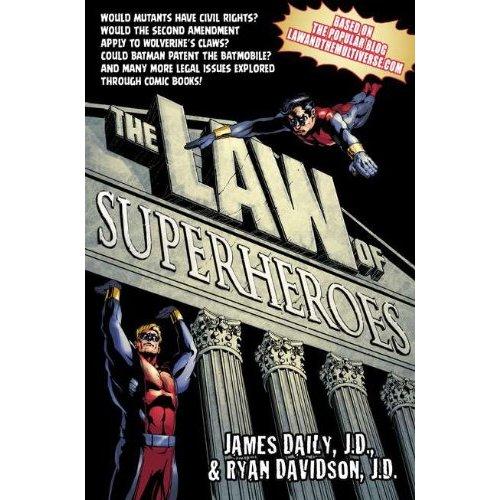 Most comic book fans argue over who’d win in a fight. Superman vs. the Hulk. Batman vs. Captain America. Wolverine vs. Everybody.

But James Daily and Ryan Davidson have different arguments. On their website Law and the Multiverse, the two lawyers are constantly discussing legal issues as they pertain to superheroes. Unlike the superstitious and cowardly lot of criminals out there, this dynamic duo put their legal powers to good use: They wrote the book The Law of Superheroes. Due out this month, the “legally fictional” book asks some pretty intriguing questions.

Could Superman sue if someone exposed his true identity as Clark Kent?

Could Batman patent the Batmobile?

Would the second amendment apply to Wolverine’s claws?

Does it constitute “Cruel and unusual punishment” to sentence an immortal like Apocalypse to life in prison without possibility of parole?

I just LOVE this way of thinking. I’m far from a lawyer, but this these guys bring up such a unique and fresh perspective on superheroes, that I’m instantly sucked in. I received an advance copy of The Law of Superheroes and I have to say it’s a highly entertaining read. Not only will you actually learn some legal jargon and get a better grasp on the legal system as a whole, but these guys legitimately try to answer all of these hypothetical questions.

In 13 chapters, the book tackles a variety of topics including Criminal Law, Contracts, Business Law, Intellectual Property, Travel and Immigration, and more. While I think I’d enjoy the book a little bit more if I had some sort of legal background (My lawyer brother-in-law Steve is dying to read it.), I was easily able to follow the arguments and discussion all the way through. It never talks down to the reader, nor does it toss a zillion high-faluttin’ judicial terms that go over your head.

If you’re a fan of comic books, the law, or just fascinating books that have an interesting take on things, I highly recommend picking up a copy of The Law of Superheroes.

On Sale October 11 – Buy the Law of Superheroes

Win a copy of The Law of Superheroes

Thanks to James Daily and Ryan Davidson for sponsoring this legaltastic giveaway!

Giveaway ends on October 15, 2012 at 11:59 p.m. The winner will be chosen at random and announced on this site. Giveaway is open only to legal residents of the fifty (50) United States (including District of Columbia) who are at least eighteen (18) years old at the time of entry. The Winner will be notified by email and has 48 hours to respond or a new winner will be chosen.

I received a copy of the featured product in exchange for my honest opinions. The thoughts and opinions expressed in this post are my own and in no way were influenced by the company providing the product.
Share3
Tweet14
Pin
17 Shares