Next to a complete hard drive crash, just about the worst thing that can happen to your computer is when it’s infected. Whether it’s spyware, malware, worms, horses, pigs (pigs?), it doesn’t matter. When some super annoying virus takes hold of your computer, it becomes a complete nightmare.

I can’t tell you how many times I’ve had some computer (either mine or my wife’s) infected. Yes I’ve used 19 million different antivirus programs over the years. For the most part they’re fairly similar. But they eat up a ton of memory, slow my machine down, and conflict with a lot of other programs. So yeah, there’ve been a load of times I had nothing protecting my machine.

There’s one program, however, that I actually do prefer over the others. And I’m glad to see I’m not the only one. If you haven’t tried Webroot yet, you should give it a shot. It definitely had the least slowdown effect of all anti-virus programs I’ve ever used on my computers. Plus the Webroot SecureAnywhere Complete 2013 program protects up to 5 of your devices! Yep, that even includes your smartphone.

There’s nothing like that pit in your stomach when your browser keeps spewing out popup after popup, as your pages all redirect to some awful, evil online store. It always reminds me of that scene in Jurassic Park where Newman’s hacked into the computers and you say his face, as his finger waves from side to side and he says, “Ah ah ah. you didn’t say the magic word.”

Nobody wants to think about anti-virus programs until they’re hit with a virus. But trust me, it’s 1,000 times better to stop it before it happens, than to deal with it aftwerwards. You really don’t want to have all your LOLCatz infected now, do you?

Here’s what Webroot’s all about:

The complete online security choice of computer experts to protect your computers, mobile devices and files.

* Groundbreaking Protection – Defeats viruses, spyware and online threats
* No Slowdowns – Proven to scan faster and use less memory than other security products
* Online File Backup – 25 GB of online protection to keep your files and photos safe and make them available on all your devices

One year of Webroot SecureAnywhere Complete 2013 costs just $79.99 for up to 5 devices. 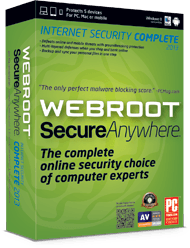 Use the Giveaway Widget below to enter!

Giveaway ends on December 3, 2012 at 11:59 p.m. The winner will be chosen at random and announced on this site. Giveaway is open only to legal residents of the fifty (50) United States (including District of Columbia) and Canada who are at least eighteen (18) years old at the time of entry. The Winner will be notified by email and has 48 hours to respond or a new winner will be chosen.
I received the featured product in exchange for my honest opinions. The thoughts and opinions expressed in this post are my own and in no way were influenced by the company providing the product.
More Contests & Giveaways:
About.com Contests & Sweepstakes
As seen on Hypersweep.com!
ContestCanada.net
The Sweepstakes Wire™
Car Sweepstakes
Share12
Tweet27
Pin
39 Shares