In my long and sordid professional career, I’ve attend more than my fair share of comic book conventions. I was a regular attendee of San Diego Comic-Con back when it actually was pushing comic books more than the latest Hollywood release. Nothing against the current SDCC, but it’s gotten so ginormous, it can take you four hours to go from one end of the hall to the other, just because of the packed crowd.

Anyways, the coolest thing about these conventions (besides finally scoring my comic book Holy Grail:  Avengers #4!) was the costumes. Whether it’s a comic book, gaming or anime convention, detailed costumes (known as “cosplay” to you muggles out there) are the show within a show. Yes there are usually costume contests, but just walking around conventions, you can see hundreds, if not thousands of homemade costumes ranging from the absurd to the hysterical to the inspirational.

The more authentic a costume, the cooler it is. And when it comes down to the details, sometimes you need a real professional to help out. I recently discovered that an old industry friend of mine had his own company that makes… Steampunk Goggles. Talk about a niche market, right?

I don’t know much about the whole steampunk world, but I love the concept. A magical world where everything is run on, well, steam. But just as the Flintstones had dinosaurs replacing all of today’s modern devices, the steampunk worlds toss pipes, gears and loads of rivets on anything they can. It just looks crazy, awesome cool.  Tons of video games are set in this reality or at least touch upon it, from Bioshock to Epic Mickey.

As someone who needs glasses to keep from walking into walls, my lenses are like Coke bottles. That’s why I wear contacts. But if I lived in a world where my glasses were steampunk goggle-style, I think I’d be happy to wear them 24/7!

Prices on Steampunk Goggles range from roughly $40 up to $220 and you’ll find a crazy assortment of styles  (even a monocle!), lens colors, eye loupes, and loads more.

There’s also a really cool Steampunk Goggles Playing Cards Deck in the works… but they need your help! This really slick-looking deck of cards will be manufactured, but only if the Kickstarter goal of $24,000 is reached. (As of this writing, they were up to $19,941 with just 6 days to go!).

Every card in this illustrated deck features a character or object with a different pair of steampunk goggles. Check out this neat video about the entire creation process.

There are some pretty neat bonuses available for pledging too, including having your likeness appear on one of the cards! So help a steampunk brother out and go check out the Steampunk Goggles Playing Cards Deck Kickstarter and show some support. Even if it’s just $1, every buck counts. And if you can’t afford the $1, then just spreading the word can make a huge difference too! 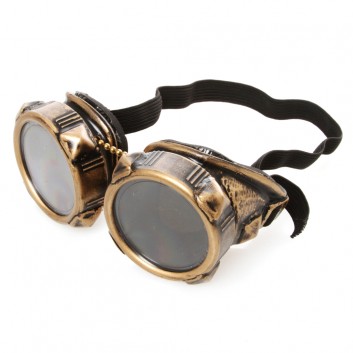 This steampunk accessory comes in an antiquated brass color and is lined with square studs. It has an adjustable elastic band that is designed for comfort.

To enter, use the Rafflecopter Widget below:

Giveaway ends on January 20, 2014 at 11:59 p.m. The 1 winner will be chosen at random and announced on this site. Giveaway is open only to legal residents of the fifty (50) United States (including District of Columbia) and Canada, who are at least eighteen (18) years old at the time of entry. The 1 Winner will be notified by email and has 48 hours to respond or a new winner will be chosen.