Growing up, one of my favoritest games in the world was Superfection! It was just like Perfection (where you have to put small yellow odd-shaped pieces into the board before the timer runs out and the board POPS, sending all the pieces flying. Superfection was the same thing, except instead of small yellow pieces, you had to put these 2-piece puzzles together (they’d form a square) and then put the square on the board before the timer ran out.

Man, I loved that game! In more recent years, I’ve matured and now enjoy more sophisticated games like, say, Jenga! Build a tower, then slowly remove a piece and place it on top, careful not to knock the whole thing over or it’s game over.

Well, wouldn’t you know it, but Hasbro has combined two of my favorite games into one with the new Jenga Boom game! It’s the same old Jenga, but with a twist… you build the tower on top of an explosive base. The base looks like a stack of dynamite and yes, there’s even a fuse!

You pull the fuse to start the game and then as you begin your turn, you hit the switch to ON, hitting OFF when you’ve finished moving. Your opponent does the same, and so on. Not only are you trying not to knock the tower over, but you’ve now got a time limit to add to your stress. It’s like Speed Chess, Jenga style!

When the fuse hits the base, it pops up and knocks the entire tower over. Whoever’s turn it is at that moment loses!

Let’s take a look at a quick game between myself and Jason. Using the handy stacker tool, I quickly set the tower up on top of the base and we started to play! 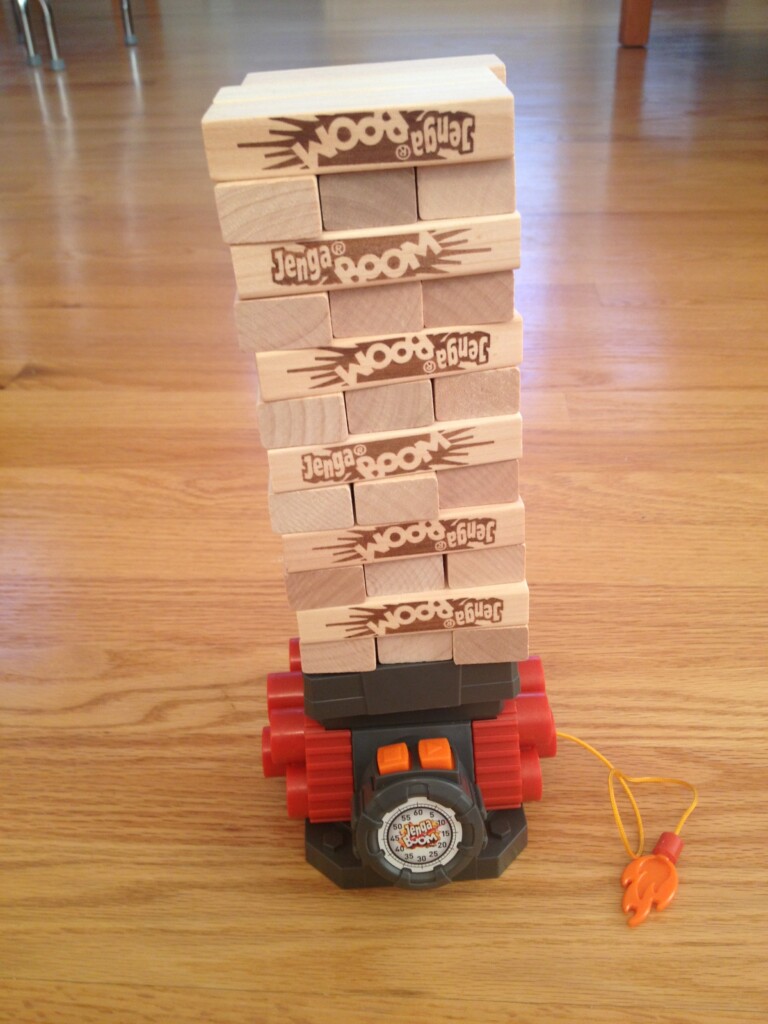 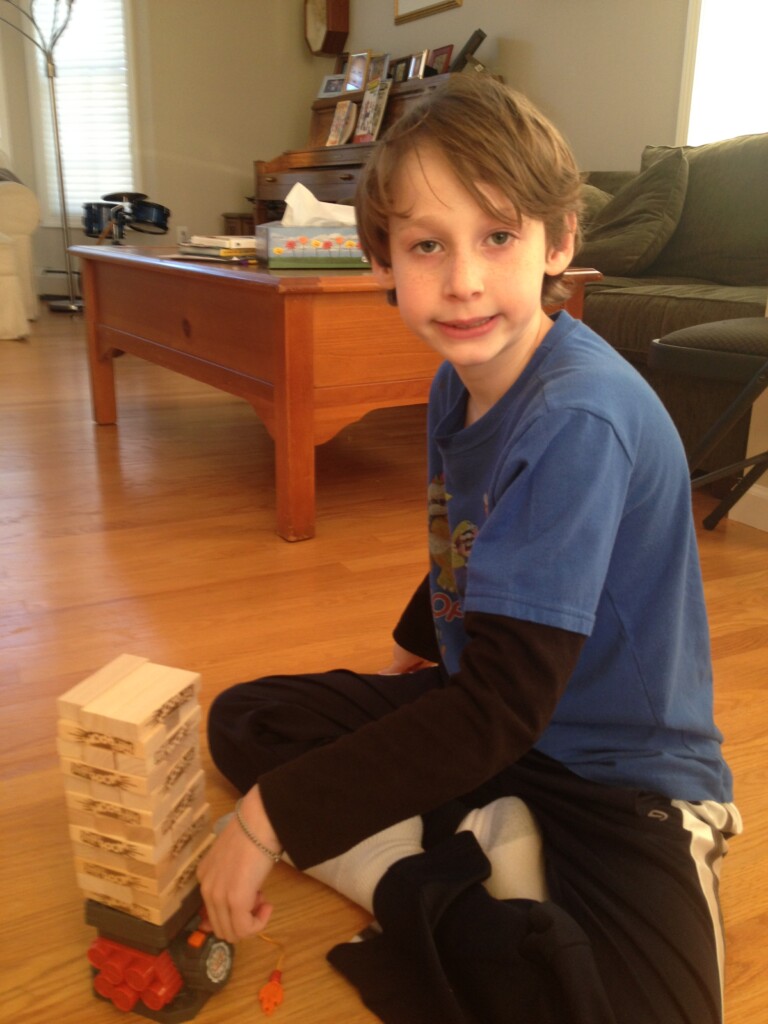 Next up was my turn. As sweat slowly made its way down my forehead, I managed to remove one block from the middle  and place it on top. Whew! 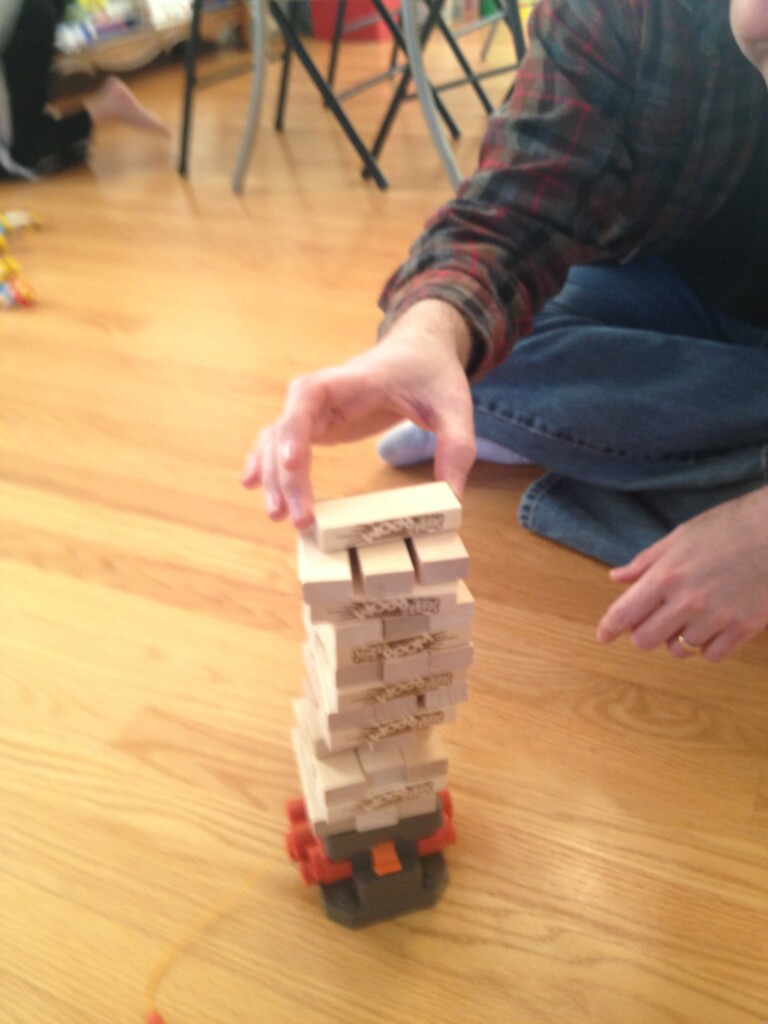 We went back and forth like this for a few minutes, and the tower started getting a bit wobbly. And then, it was my turn and… well… can you think of a word that rhymes with DOOM? 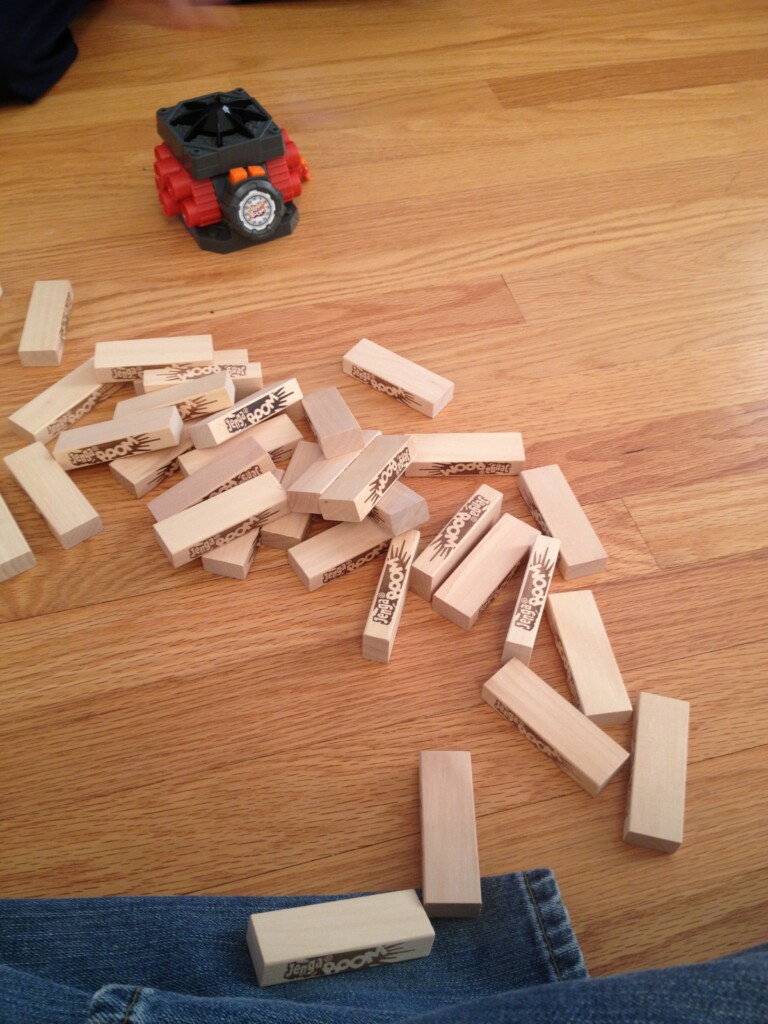 Jenga Boom is a fun alternative to the regular game of Jenga. I like the addition of a timer to the game and it actually was real easy to set up on top of the base. I only wish there was more of an “explosion” rather than just the tower collapsing. When the fuse hits, it pops up a small piece in the base, which moves the bottom pieces of the tower, causing it to topple.

Yeah, there may be some liability issues, but it would’ve been even cooler if the BOOM was more like a real explosion that shot all the pieces a few feet in the air!

The neat thing about Jenga Boom is that you can also play it as regular Jenga if you don’t use the base. So depending upon your mood, you could go with a speed version or just a normal slow version.

If you’re a fan of Jenga or just like trying out new games, definitely give Jenga Boom a chance. It’s dy-no-mite!

Use the giveaway widget below to enter

Giveaway ends on February 25, 2013 at 11:59 p.m. The winner will be chosen at random and announced on this site. Giveaway is open only to legal residents of the fifty (50) United States (including District of Columbia) who are at least eighteen (18) years old at the time of entry. The Winner will be notified by email and has 48 hours to respond or a new winner will be chosen.