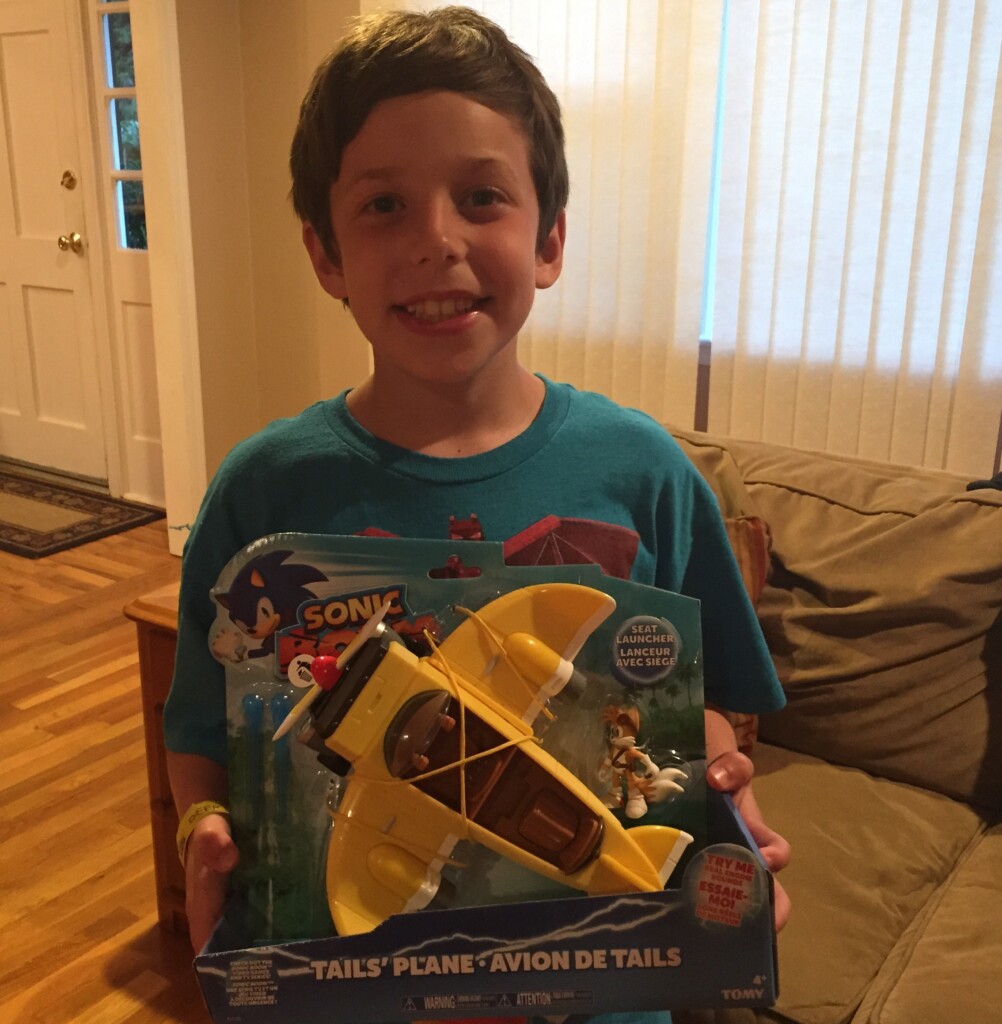 While my kids are addicted to Nintendo, that doesn’t necessarily mean that our house is overflowing with Mario toys everywhere. Okay, fine, so it is. But they do like other characters as well, including that blue-furred hedgehog Sonic!

We’ve got a slew of Sonic action figures and stuffed animals all around the house and when TOMY asked if I was interested in reviewing their new line of Sonic Boom toys, I couldn’t run fast enough to tell my boys. 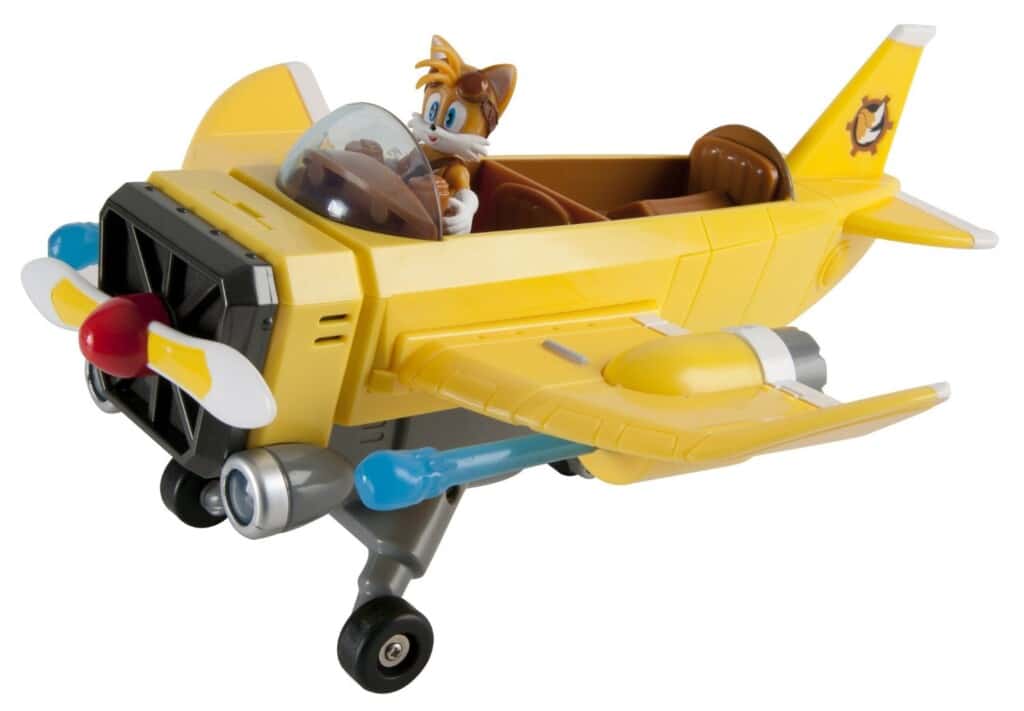 I was sent Tails’ Plane, which comes complete with an adorable articulated 3″ Tails figure. 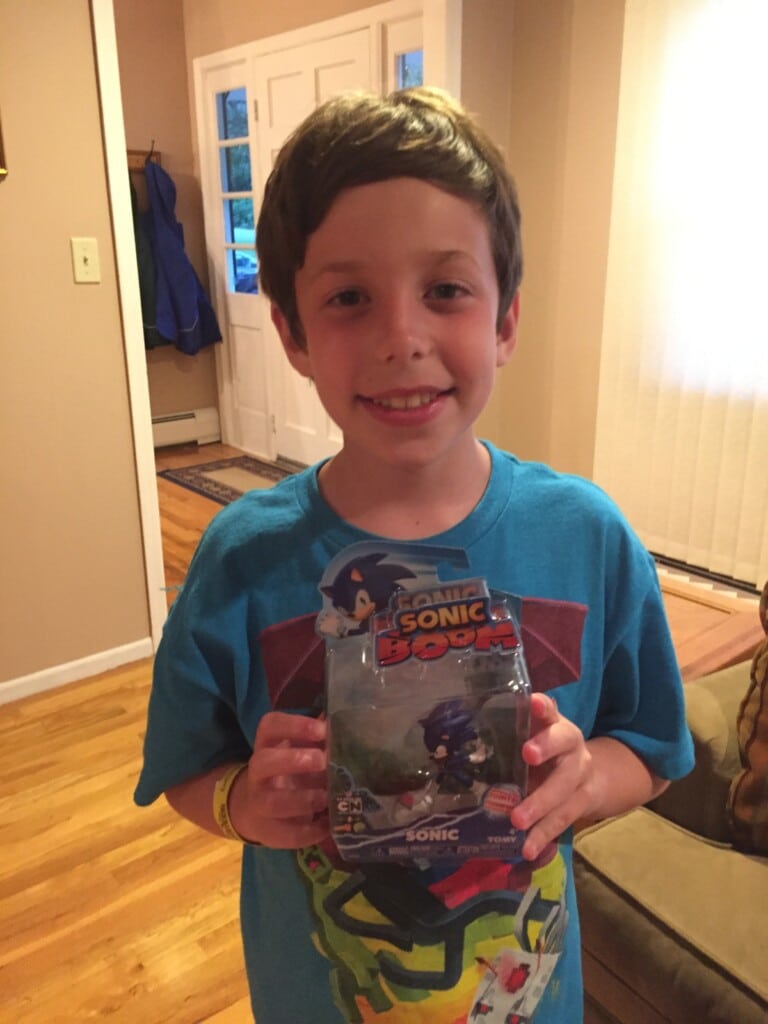 And they were nice enough to toss in a Sonic 3″ figure too. (He’s normally sold separately.) 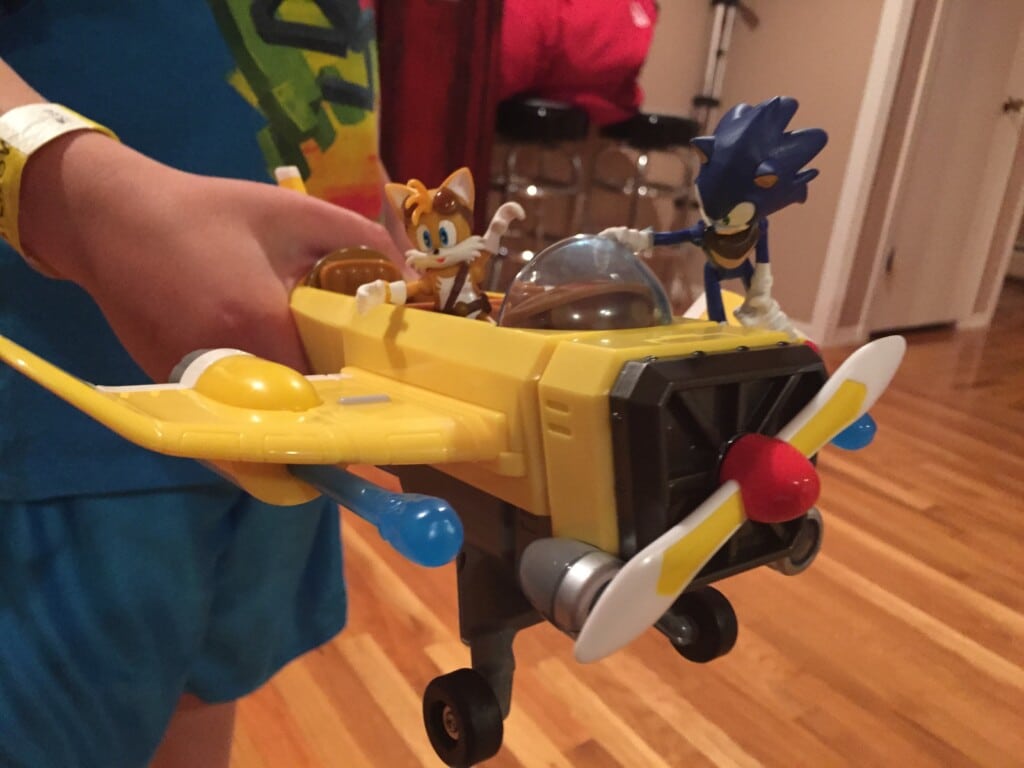 The plane’s pretty cool and made of real sturdy plastic. It just needs two AAA batteries and then you can get some really neat effects with it including flashing headlights and all sorts of engine sounds that actually change pitch as you move the plane around.

It’s pretty neat that you can hang Sonic or Tails off of the plane as you bring them around the house on all sorts of zany adventures. There’s a second seat in the back for Sonic, and it even includes an ejector seat! For emergencies, of course. 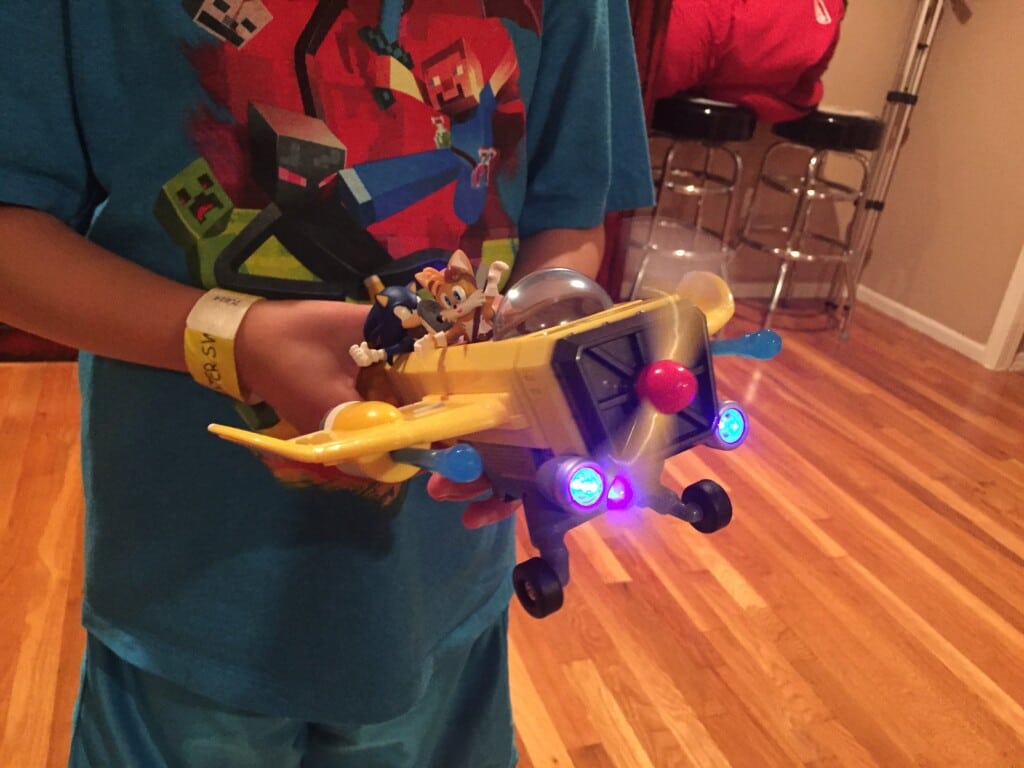 I normally don’t care one way or the other for lights and sounds, but I gotta admit these were pretty neat. They have a classic, vintage plane kind of sound to them. You can almost see the smoke coming out of the back as it putt putts along. And the bluish tint to the lights adds a fun, eerie almost fog-like feel to it all.

What kid doesn’t like propellors though? You can spin it by hand if you’d like or simply press a button on the underside of the plane to make the propellor whirl on its own as you turn on the lights and sounds. 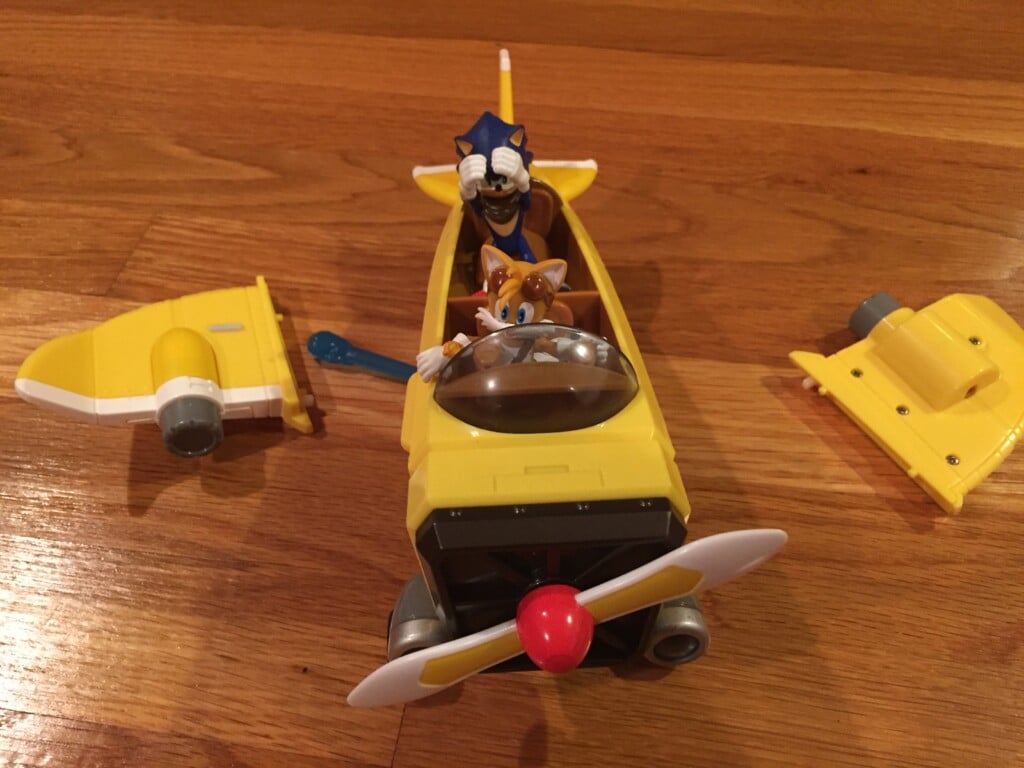 There’s also two blue projectiles you can shoot out of the wings. And speaking of wings… they’re both detachable so you can have some real hair-raising adventures as Tails makes a crash landing! 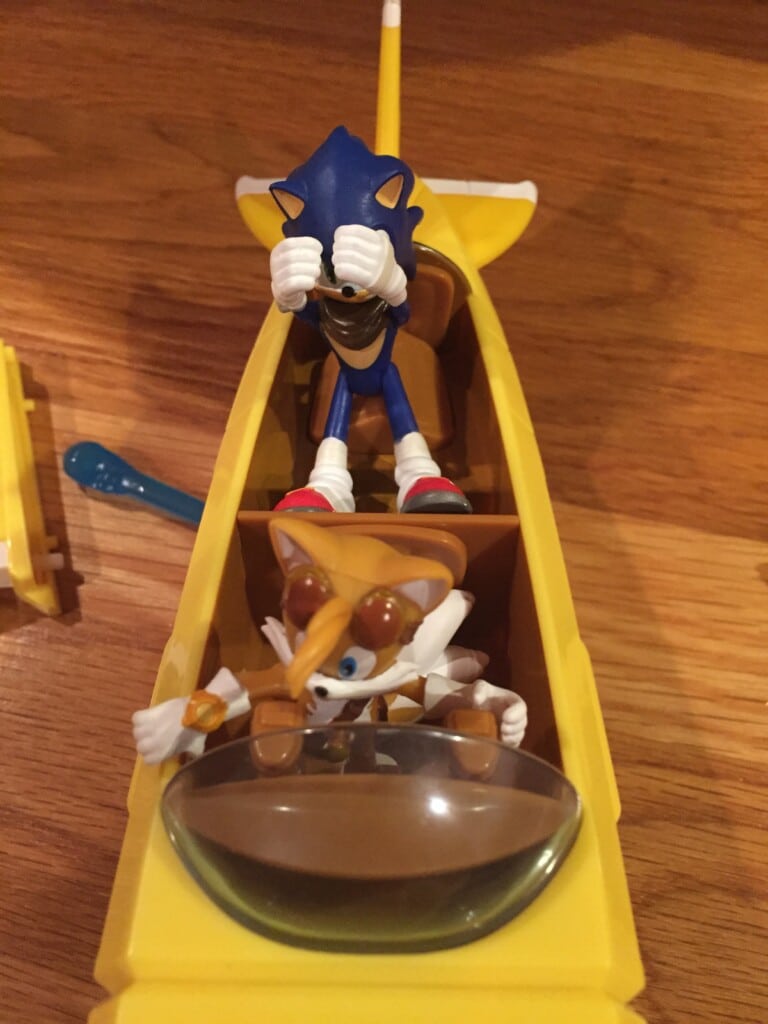 Poor Sonic couldn’t even watch, he was so scared!

All in all, the Sonic Boom Tails’ Plane is packed with sights, sounds and actions that are sure to keep your kids entertained, particularly if they love the whole Sonic Universe! Loads of other characters are available as figures too including Amy, Knuckles and even the evil Dr. Eggman!

Take a look at his video to see the plane in action!

Tails’ Plane has a suggested retail price of $29.99 and is available at Amazon or ToysRUs.com.

Giveaway ends on August 17, 2015 at 11:59 p.m. ET. The 1 winner will be chosen at random and announced on this site. Giveaway is open only to legal residents of the fifty (50) United States (including District of Columbia), who are at least eighteen (18) years old at the time of entry. The 1 Winner will be notified by email and have 48 hours to respond or a new winner will be chosen.