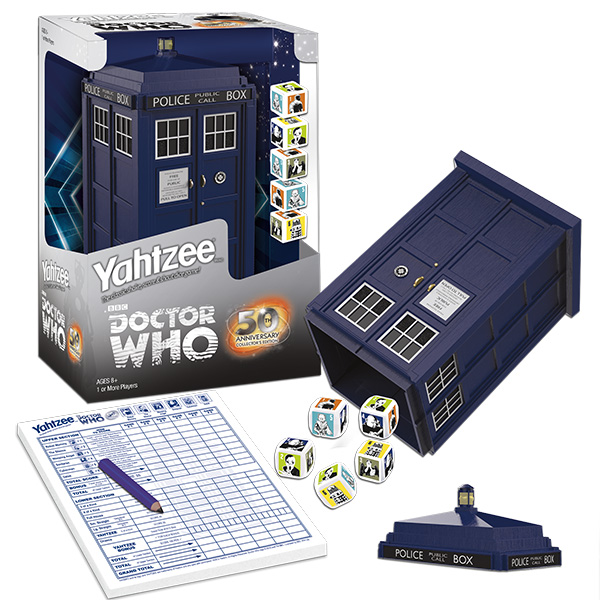 I’m happy to say that after a long hiatus (like 3+ years), Allie and I have jumped back into the new Doctor Who series. We had been watching up until the Matt Smith Doctor just began but then just stopped for one reason or another.

We’ve now caught up as much as we can on Netflix and apparently we’re just one season behind. Hopefully that one will show up soon so we can be 100% caught up. There’s just something tragically awesome about the whole series. It’s magical. It’s confusing, as time travel always is. It’s full of thick British accents. And, well, there’s just so much awesomeness and… well, pure goodness at its core.

So when I discovered that my super-cool friends over at USAopoly had a Doctor Who 50th Anniversary Edition of Yahztee, well, you don’t need a sonic screwdriver to decipher whether I wanted to review one or not.

The game plays exactly like Yahtzee, which, if you’ve never played before, is like playing poker with dice. You roll five dice up to three times each turn, trying to make all sorts of “hands.” There’s 3 of a kind, 4 of a kind, full house and even Yahtzee (5 of a kind). Points are awarded based on what you roll so there is certainly some strategy and lots of risk in this one.

The Doctor Who version of Yahtzee follows the same rules. Sorry, no time travelling allowed, otherwise you’d just have an infinite number of chances at getting Yahtzee. But the dice feature six different Doctor Who-related characters: Robot Mummy, The Silence, Weeping Angel, Sontaran, Cybermen, and Dalek. Oh, and yeah, instead of the normal boring black cup to toss the dice around in, you get your very own TARDIS.

Duck! The Daleks are shooting at you, and the Doctor is nowhere to be found! Thankfully, America’s #1 Dice Game features the TARDIS as the dice cup, and if you give your wrist a shake in time, you can help the Doctor make his enemies fall!

Do you have what it takes to “lord” over your foes? Roll 2 Sontarans and 3 Cybermen to destroy a “full house” of monsters. Or defeat not 1 but 5 Daleks to yell out, “Yahtzee!” The game includes custom white dice with images of Doctor Who monsters including Robot Mummy, The Silence, Weeping Angel, Sontaran, Cybermen, and Dalek.

I grabbed my lovely companion (who just happens to also be my wife) and dove right into a game. Allie couldn’t wait to see what came out of the TARDIS first! 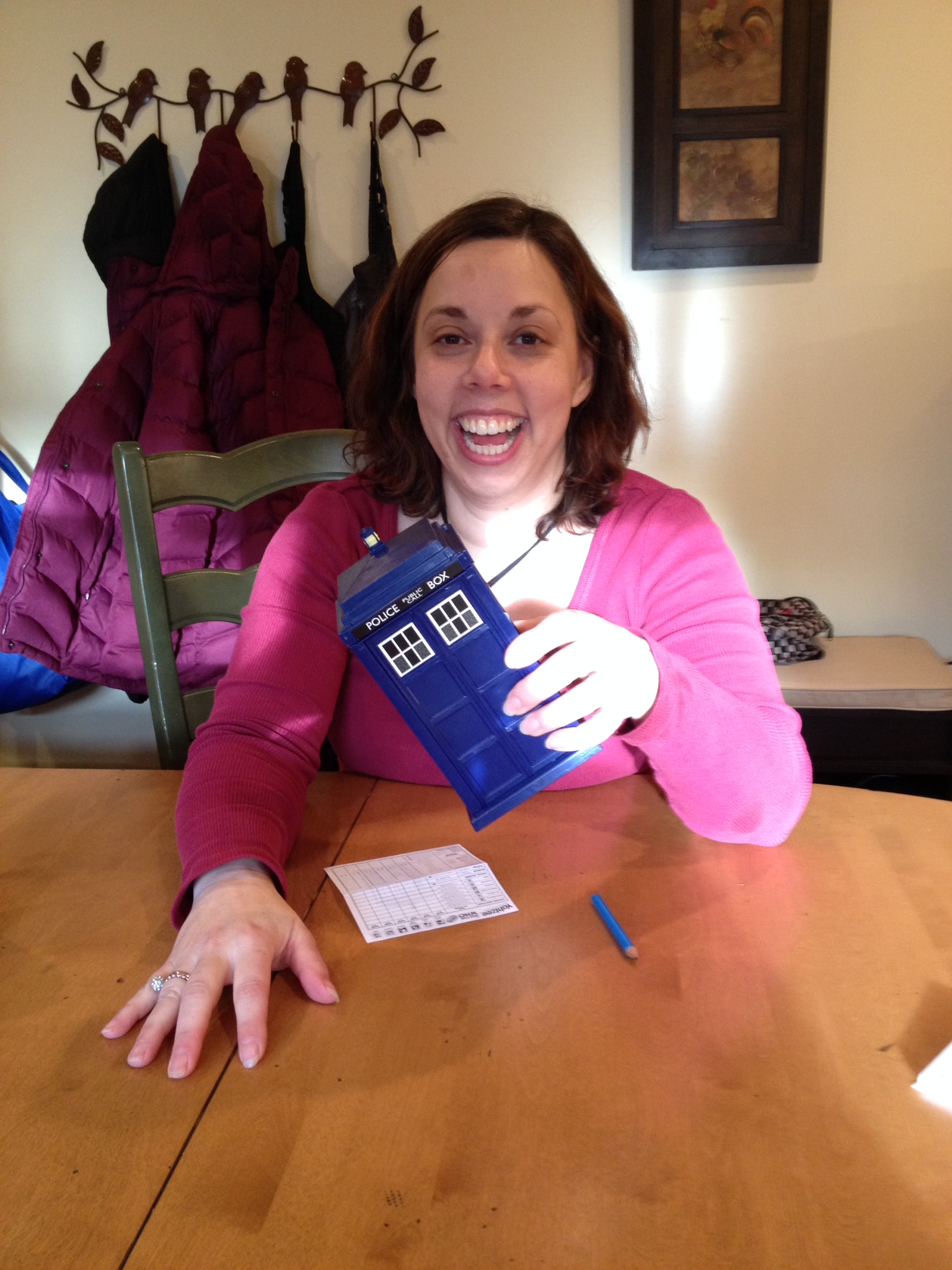 She seemed to be taking an early lead. That is until on my first of three rolls, I got this…

I later had 4 Daleks and took a chance going for 5, and the Yahtzee. Sadly, I failed.

Apparently even in dice games, Daleks can be total tools.

In the end, I actually beat Allie by a whopping 10 points! That’s pretty darn close when it comes to Yahtzee. I really love all these fun variations USAopoly’s putting out, and the Doctor Who version is no exception!

A really great addition to any Doctor Who fan’s home. And really, who wouldn’t want their own dice-filled Police Box? 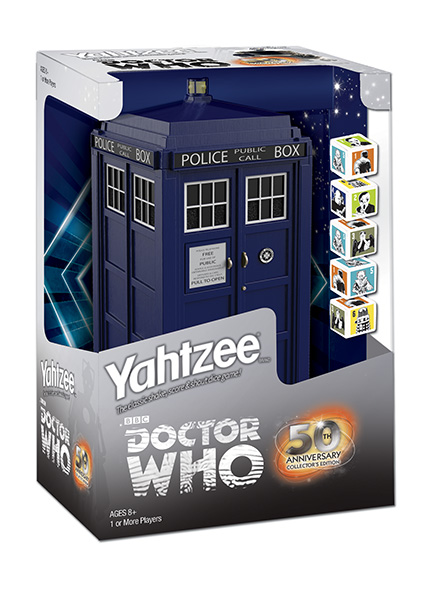 Use the rafflecopter widget below to enter!

Giveaway ends on January 22, 2014 at 11:59 p.m. The 1 winner will be chosen at random and announced on this site. Giveaway is open only to legal residents of the fifty (50) United States (including District of Columbia), who are at least eighteen (18) years old at the time of entry. The 1 Winner will be notified by email and has 48 hours to respond or a new winner will be chosen.