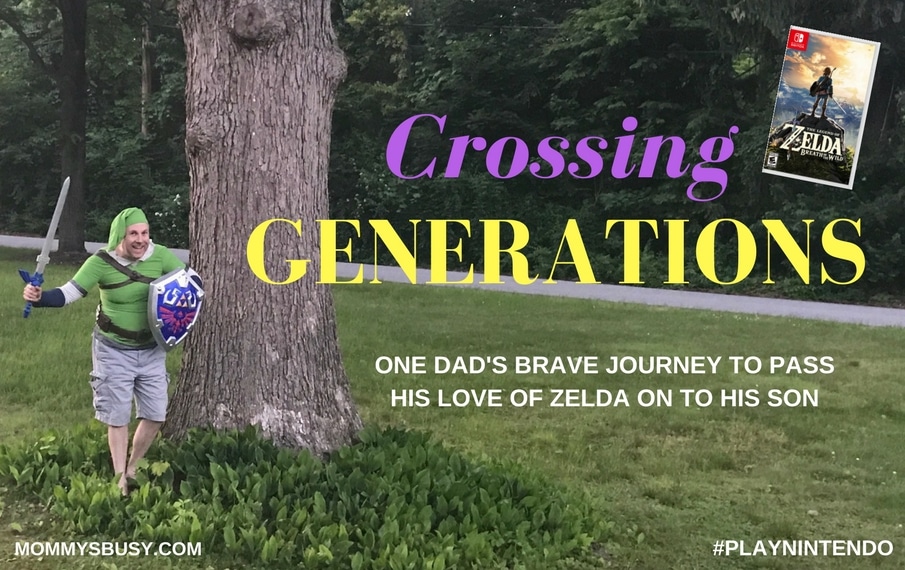 I still remember the very first time I saw The Legend of Zelda. It was the mid ’80s and we were visiting my cousins David and Michael in Parsippany, NJ. Nothing else about that trip comes to mind at all except for the moment I walked in their house, went downstairs and saw the most beautiful, shiny thing ever.

The original Nintendo Entertainment System (NES for short) skyrocketed in popularity with the release of a gold-colored cartridge for a new role-playing game called The Legend of Zelda.

This game had soooo much going for it. Neat story. A ginormous world called Hyrule that never seemed to end. Heart containers. And what at the time was revolutionary… a battery in the cartridge to help record data so you could… GASP… save your game!

It was truly beautiful, and Link I and quickly became BFFs. Flash forward a bit more than a decade and things certainly changed. I’d gone through a number big changes like graduating college, getting a full-time job and marrying my college sweetheart. I’d also gone trough a number of Nintendo consoles from the Super Nintendo to the N64.

The Legend of Zelda: The Honeymoon Phase

Yes, my second biggest Zelda memory takes me back to the first apartment my wife Allison and I lived in after getting hitched. I fondly remember sitting on the floor of our living room. Light beige carpet and big fluffy green couches surrounded me. In my hands was an N64 controller and I was fighting the final boss battle on Legend of Zelda: Ocarina of Time.

Allie was there watching me and offering helpful tips to move me on my way. Ganondorf (the big meanie who’s always causing trouble for Link and Zelda) was huge in size and we figured out to beat him, I had to run between his legs and attack. Slash. Dodge. Repeat.

It was amazing. It was heart-pumpingly stressful. It was also one of the few video games that I stuck with long enough to actually finish. Ocarina of Time is still one of my all-time favorite video games and easily my favorite Zelda game.

Though the latest, Legend of Zelda: Breath of the Wild is certainly giving it a real run for its money. (Review coming soon. Stay tuned!)

Zelda is all about tradition. It’s a different time period. A different theme. Sometimes a different animated look. But throughout it all there are definite elements that are passed down from game to game. Link is always the innocent hero with a never-ending heart of gold and a never-surrender spirit. Zelda is always the beautiful princess who puts her total faith in Link. And then there’s Gannondorf, who may change in appearance, but his evilness always continues on.

The Legend of Zelda Comes Home

As a father, traditions are quite important. They bring a family together and let you pass on important values to your children. And that’s exactly what’s happened with my son Jason and the world of Hyrule.

A video game junkie since he was 3-years-old, Jason first met Link while playing Super Smash Bros. with his cousins. Not one to pass up an opportunity, once Jason was old enough, I introduced him to Legend of Zelda: Twilight Princess on the Wii.

I gave a quick overview of my pal Link, and then sat with pride as Jason fought the bad guys while switching Link between humanoid and wolf forms.

It didn’t take long for him to get as hooked on Zelda as his own man. He started devouring anything and everything Zelda he could get his hands on. From art books to comic books to graphic novels based on some of the best Zelda games ever made, Jason has become one with Link. He even dressed up as Link for Halloween last year. And while it was a “tad” bit tight on him, he was happy to squeeze into his Link costume again before returning to the world of Hyrule.

And now, thanks to the new Nintendo Switch, Zelda is bringing my family closer than ever before. The Legend of Zelda: Breath of the Wild is the most beautiful game I have ever set eyes on. Not only is it incredibly fun to play, but the graphics and animation are so breathtaking that you feel like you’re watching a Miyazaki animated movie.

Jason started playing Breath of the Wild recently and I sat there with my jaw on the floor and my eyes wide as can be as he successfully cleared level after level. When he finished and ran off to chat with his cousins online, I grabbed my moment. I created my own profile on the Switch and started my own game of Breath of the Wild. Now we’re both playing our way through this amazing game. 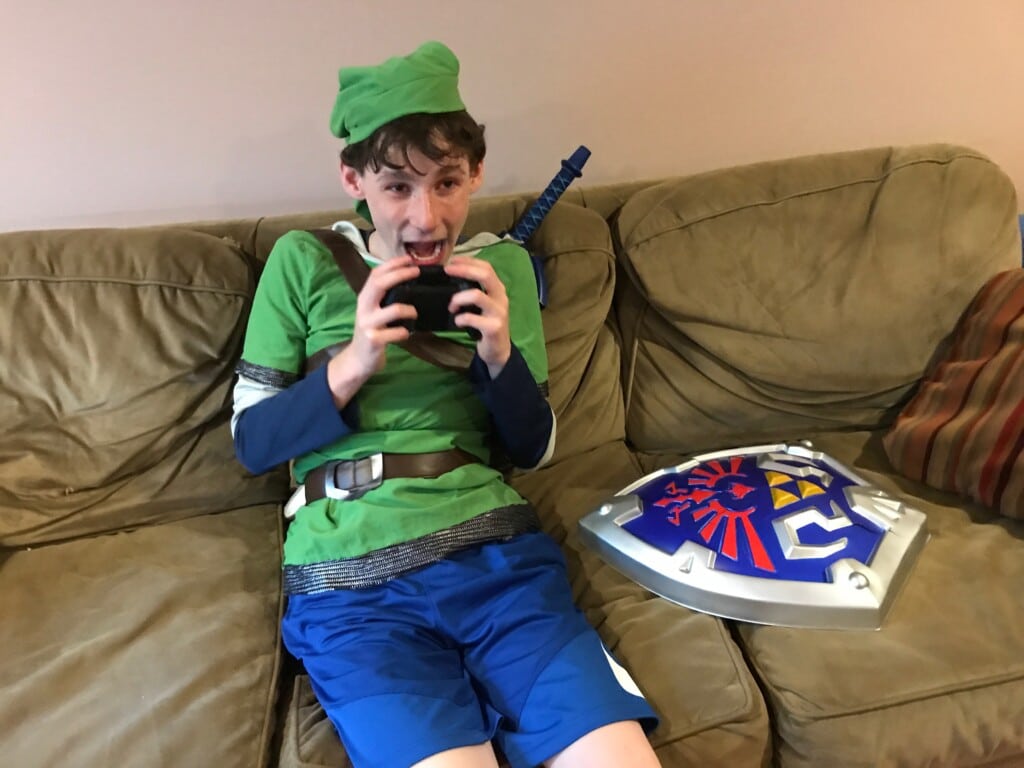 He’ll easily finish way before I will, but I’m loving watching him play. And no, not just so I learn all the tricks of the game! I thoroughly am loving the fact that a game I grew up on and played as a teenager, is now a game that my son is playing at roughly the same age I was!

I’m happy to say that the Zelda Torch has officially been passed from father to son. I was so proud of my little Link that I even knighted him.

Yes, Link and company are a true testament to how amazing the entire Nintendo Family is. I can only imagine what a Zelda game will look like when I start sharing Hyrule with my grandchildren! 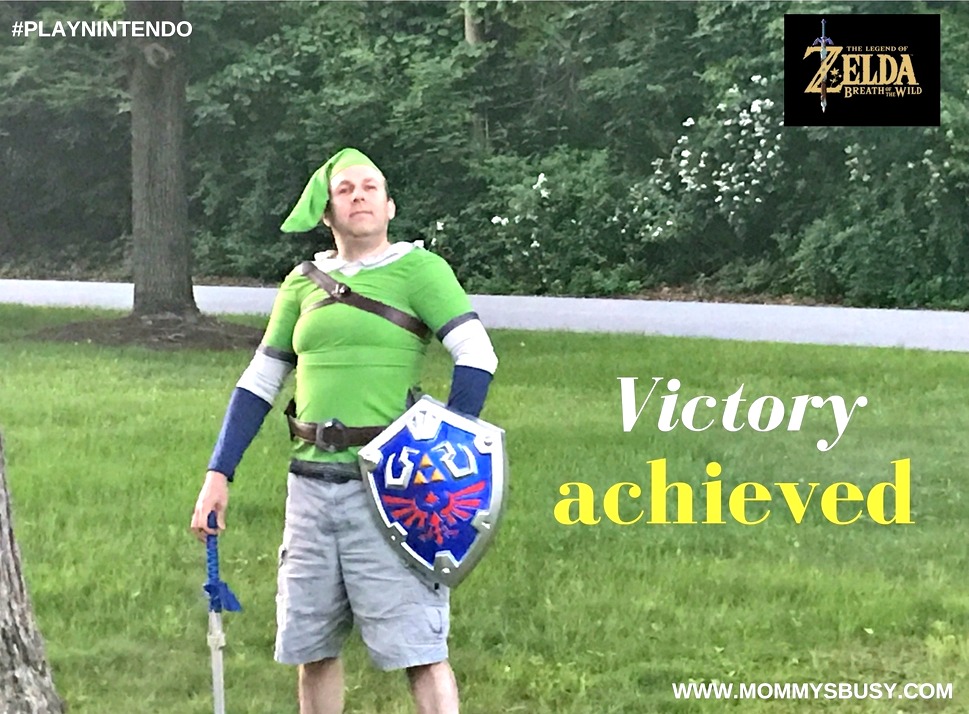