Mario Kart will always hold a real special place in my heart. Yes, I know everybody and their grandma loves playing the best racing series ever created, but for me, it means just a little bit more. Mario Kart: Double Dash was Jason’s very first video game.

I don’t remember how old he was, but it must’ve been like three or four years old. We were at my sister-in-law’s house and everybody was playing, including my nephews and brothers-in-law. Jason was always a bit of a shy kid, so it was amazing to see him actively want to play. Sure he couldn’t fully play at that age, but he sat on my lap and would press a button to activate an item.

He became so excited and alive with that one game. In hindsight, you could say it was just what the Dr. Mario ordered. That game opened a whole new world to Jason, and to this day (he turns 11 next month), if you ask him what he wants to be when he grows up, he’ll give you the same exact answer: “A video game maker.”

I love playing all the Mario Karts myself, though I have to admit, I think Ryan (who turns 9 this summer), is probably the best one in our house. He crushes me every time! So I can’t wait for the new Mario Kart 8 for the Wii U coming out May 30. (NOTE: My birthday happens to be on June 2. Just saying…)

There’s a load of new playable characters, tracks and features! Apparently there’s a new anti-gravity feature which lets you race up walls and even upside down! Vertigo, FTW!

What else can you expect from the newest release? Take a look at some of the highlights:

Spin Boost – If you’re racing upside down or on a wall, just bump into another racer or certain track obstacles and you’ll earn yourself a quick speed boost.

The Return of Favorite Characters – It was previously announced that you can actually play all seven of Bowser’s Koopalings for the first time ever, but a few fan-favorite playable characters return this time around including Metal Mario, Lakitu and Shy Guy!

New Items – You still gotta love the mushrooms and turtle shells, but two new items are now added to the mix. First is a Piranha Plant that attaches to the front of your kart. Besides chomping at other characters and obstacles on the track, it gives you a brief speed boost as it lunges forward. The other new item is a Boomerang Flower that lets you stun multiple opponents with just one toss.

Rock Out – It’s never been done before in a Mario Kart game, but now select courses will features music recorded by live performers! (I’d pay good money for them to include Sammy Hagar’s “I Can’t Drive 55.”)

I for one am super pumped for this release and only fear one thing: the battle over controllers between my kids and their friends when Mario Kart 8 races into our home!

Mario Kart 8 Speeds Into Stores on May 30 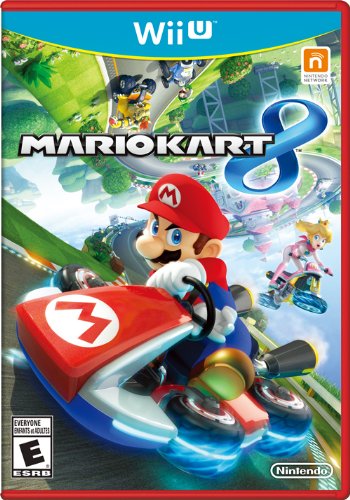 11 thoughts on “Rev Up Your Wiimotes, Mario Kart 8 Races Into Stores May 30”