This shop has been compensated by Collective Bias, Inc. and its advertiser. All opinions are mine alone. #AvengersUnite #CollectiveBias

Yeah, that’s my new battle cry as I prepare to soak in the gloriousness of this summer’s sure-to-be biggest blockbuster ever MARVEL’s The Avengers: Age of Ultron.

Okay, so May 1 isn’t exactly summer, but it’s hot enough to kick off some sizzling cinema time! And Earth’s Mightiest Heroes may be battling the I-Hate-All-Humans-And-Everything-They-Stand-For robot named Ultron, but at the same time, Earth’s Mightiest Retailer is gearing up for battle too!

Walmart is helping to promote MARVEL’s The Avengers: Age of Ultron with more Avenging products than you can shake an enchanted hammer at. Thanks to the super folks at Collective Bias, I had the opportunity to test out the “assemblance” of awesome products currently available!

Given a budget and a very difficult mission (Go buy lots of cool “Avengers” stuff at Walmart!), I suited up and headed out to my local Walmart.

First I did what any average superhero-loving male would do. I hit the snack aisle! Or should I say, it hit me! 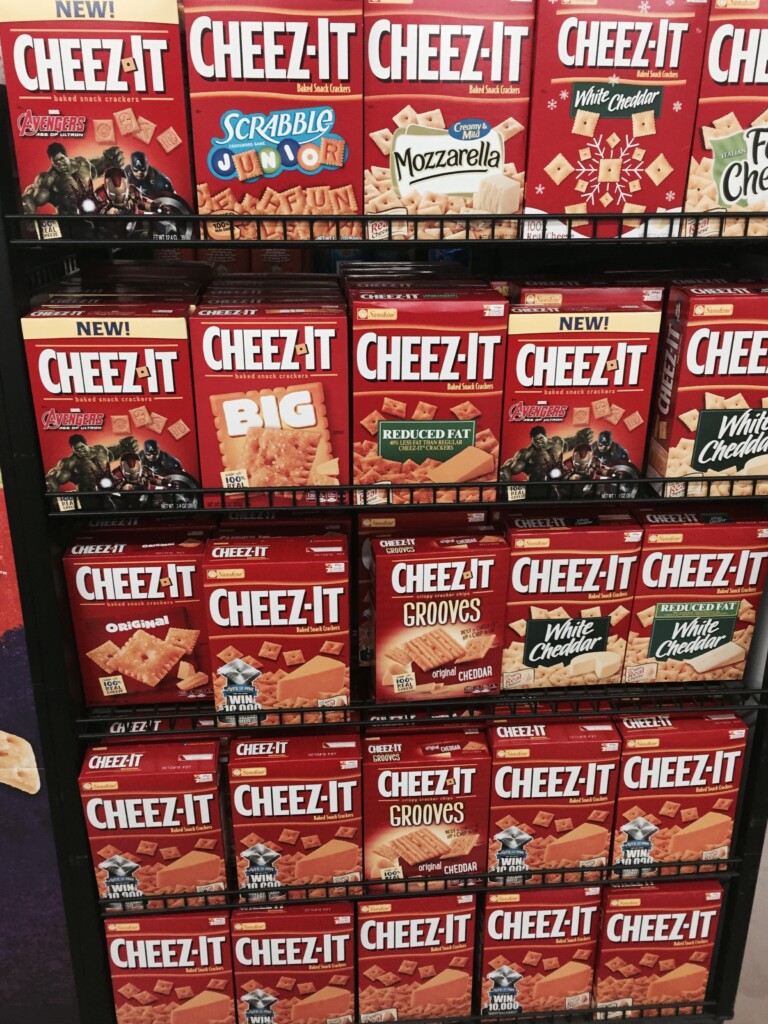 BAM! It’s a wall o’ Cheez-Its! I seriously need one of these in my home. Jason and I love munching on these cheesy crackers while we watch Agents of S.H.I.E.L.D every week. 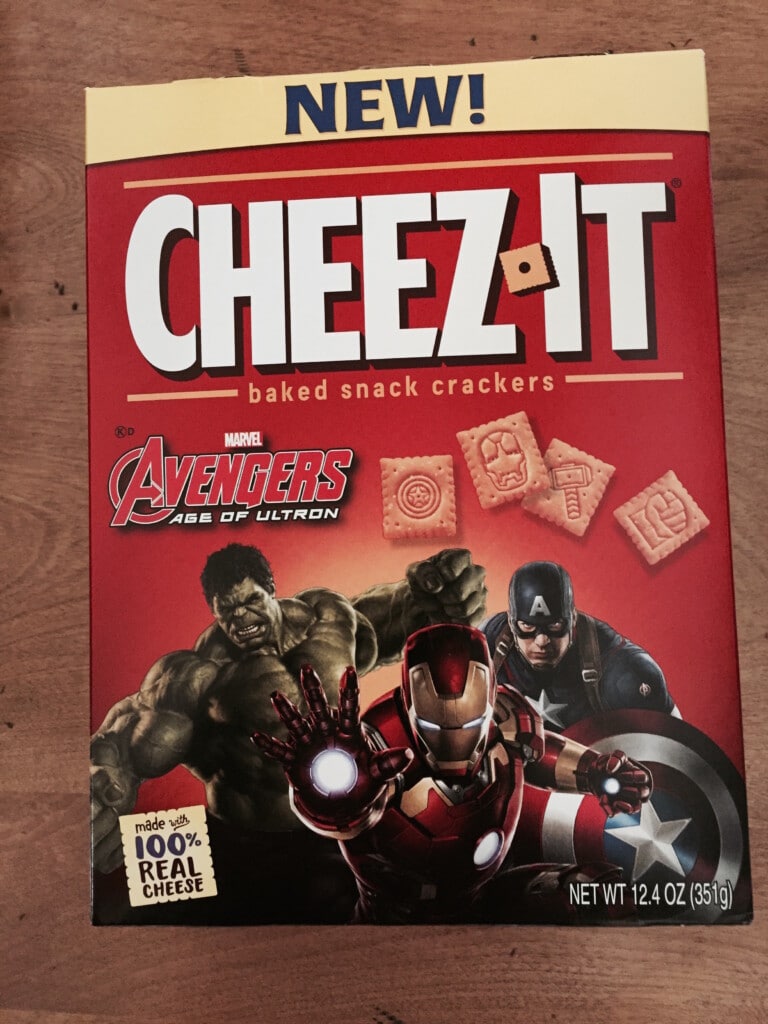 Even cooler, there’s an official MARVEL’s The Avengers: Age of Ultron box of Cheese-Its available! You know I had to buy a box. For… uh… reference purposes, of course. 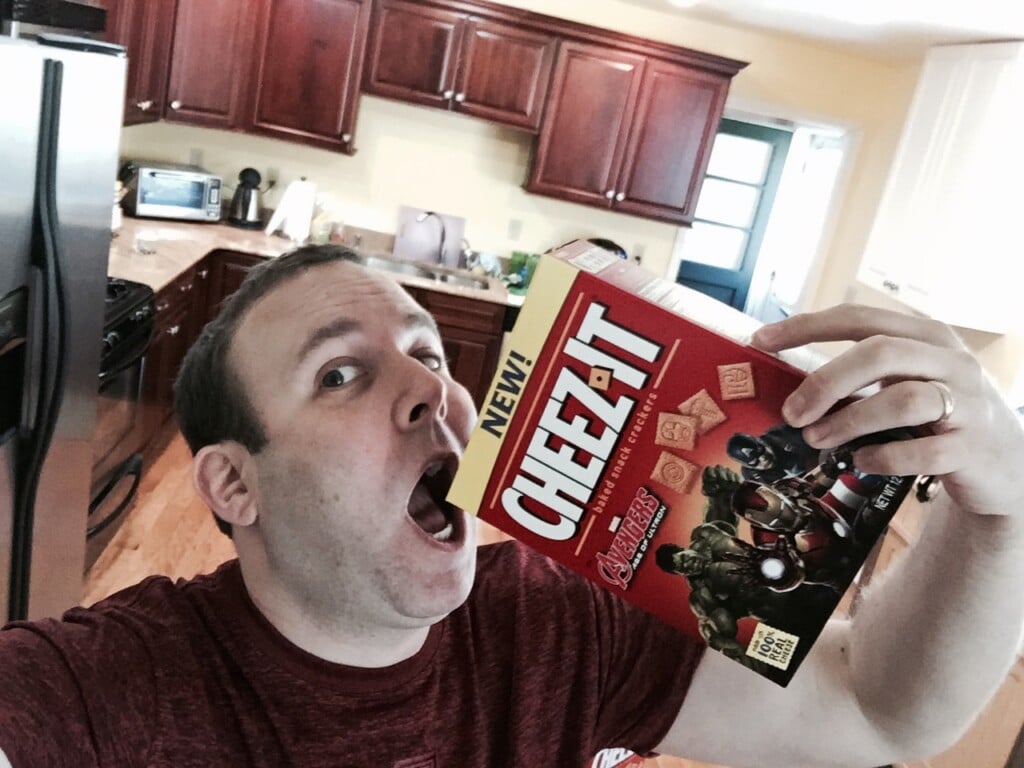 You try to take a selfie while pouring a box of cheesy deliciouness down your throat! 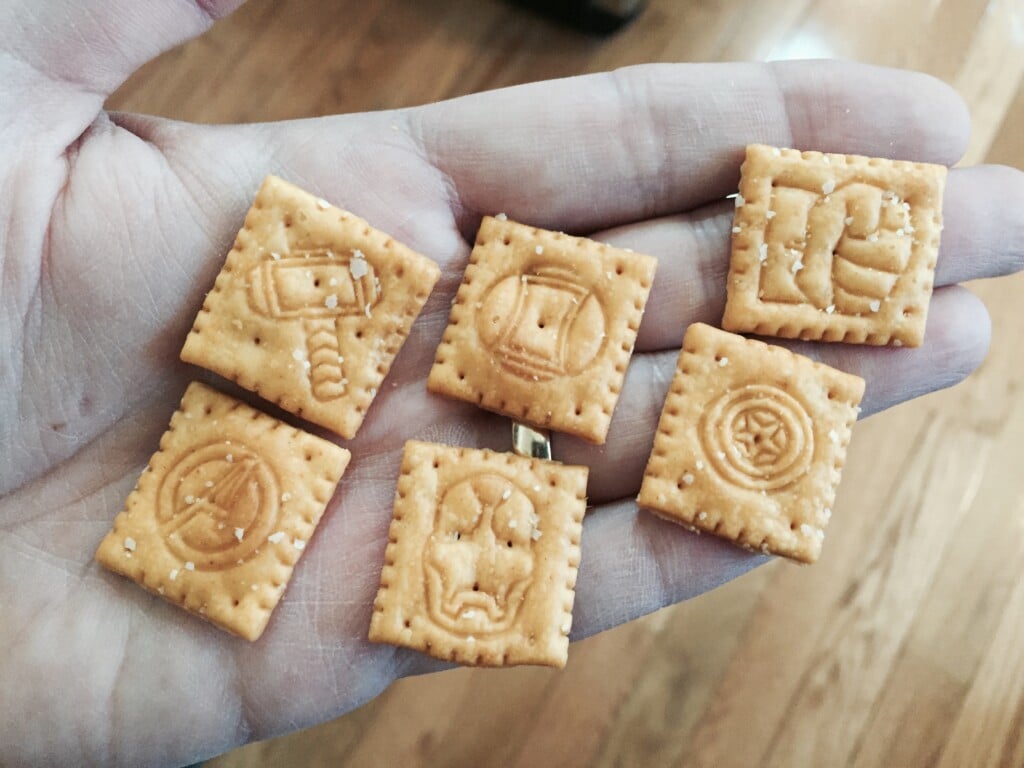 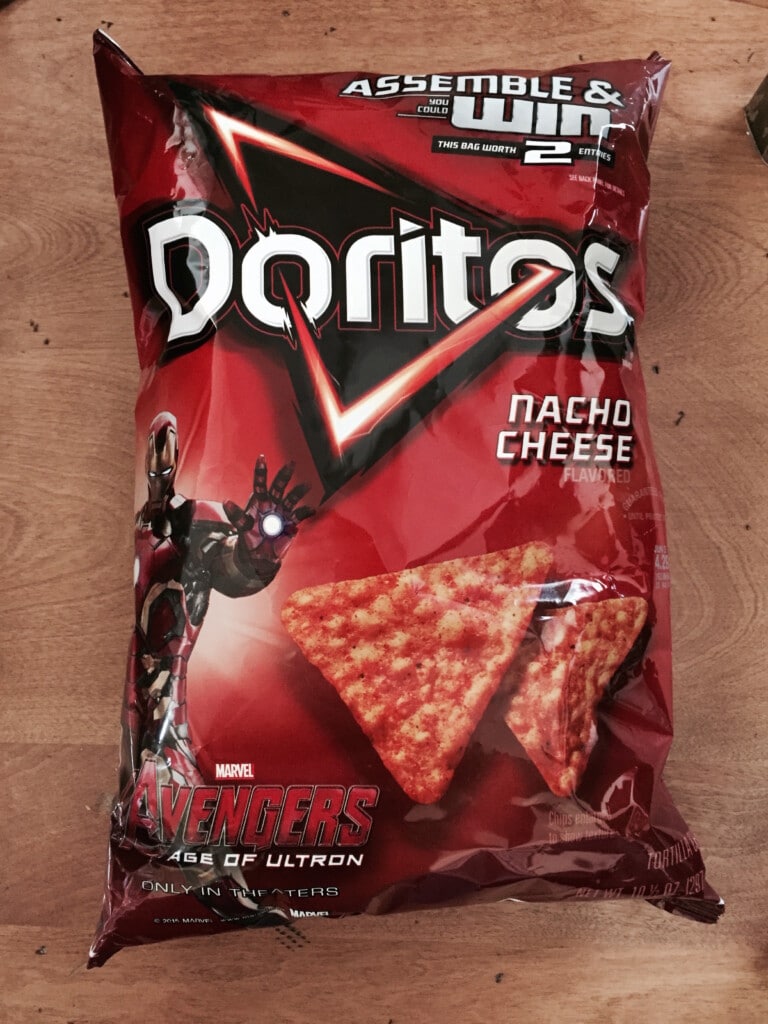 And what goes better with Cheese-Its than… more cheese-flavored snacks?!? Doritos have assembled a great roster of Avengers on the various flavors available. I grabbed the original Nacho Cheese flavor on the all-too-familiar red bag and was greeted by a repulsor-blasting Iron Man. Hope he’s not about to blast me for stealing his chips! 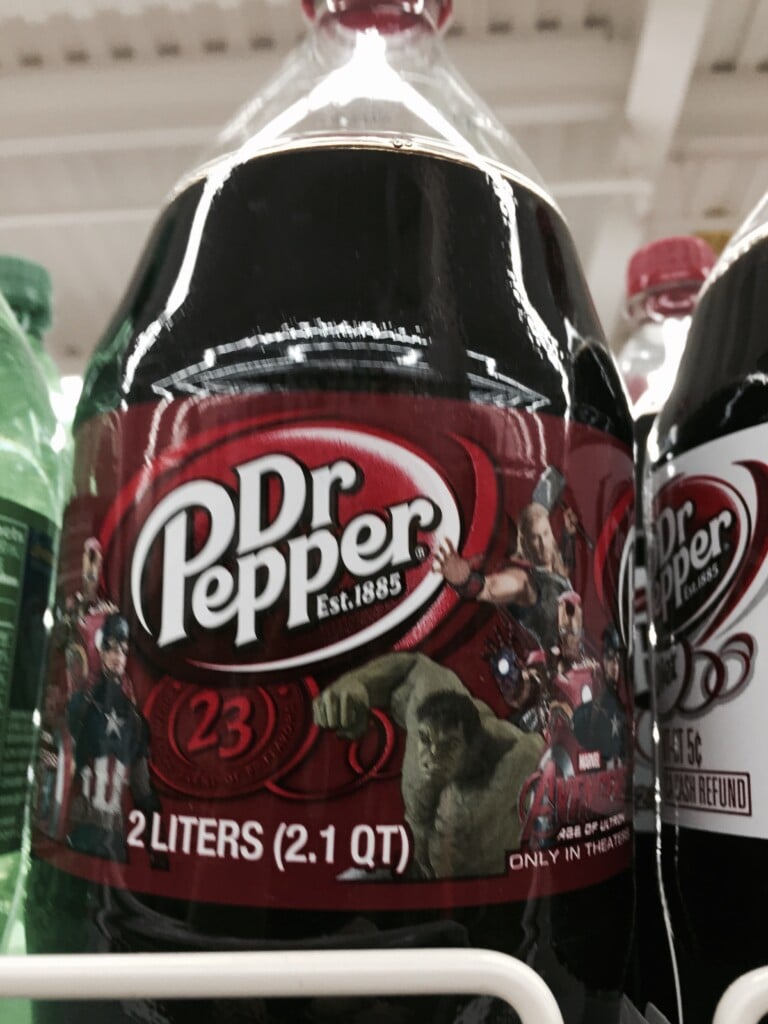 You definitely need to wash all that cheese down with a drink, though. And wouldn’t you know  it, Earth’s Mightiest have gotten themselves carbonated on Dr Pepper bottles as well! 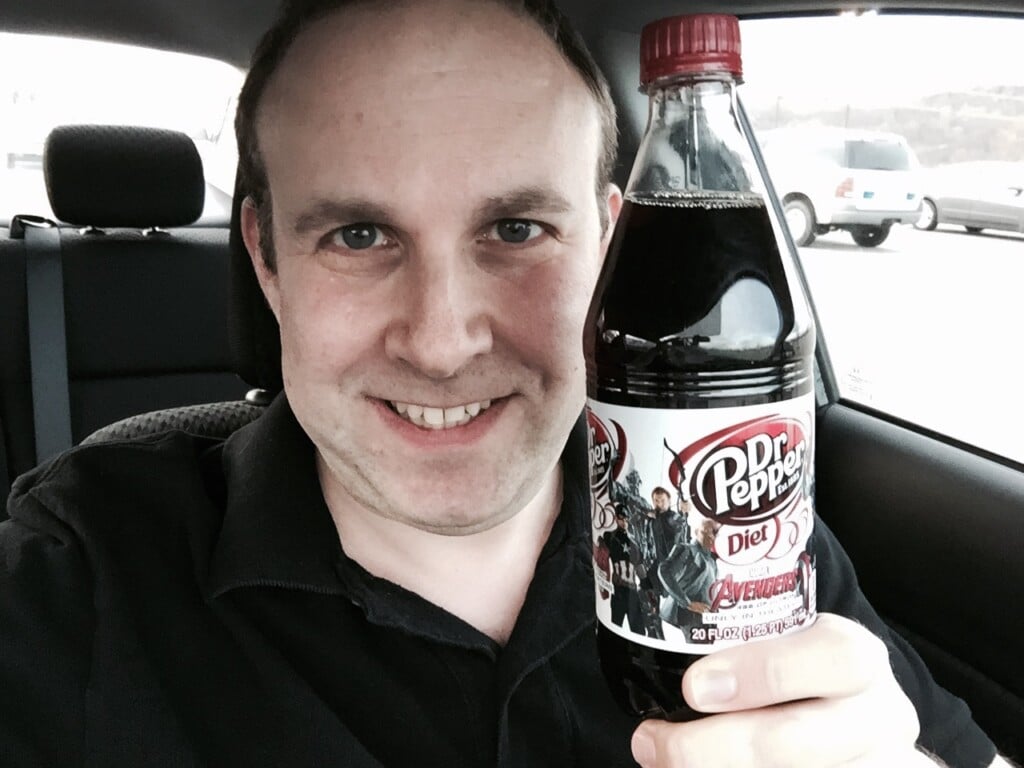 And for us folks that need to keep up with our girlish figure, they’ve also got Diet Dr Pepper covered. 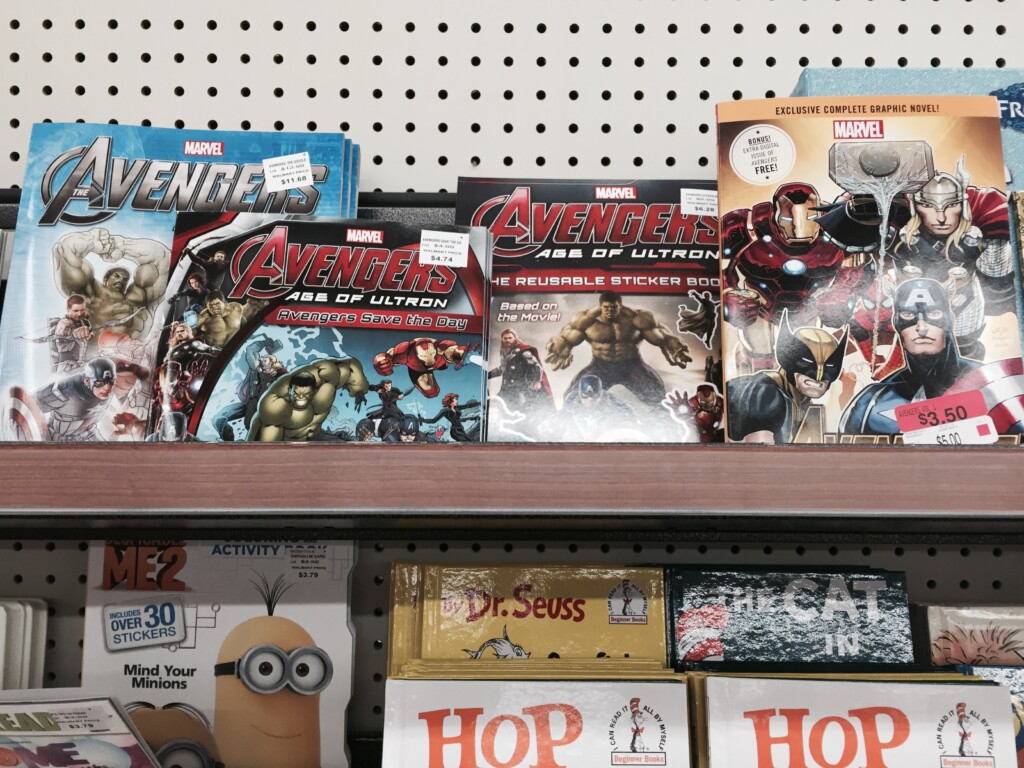 As I walked around the rest of Walmart, I saw loads of superhero action figures and even a nice collection of Avengers books. But those didn’t do it for me. I wanted something really over-the-top cool that I could use to proudly display my geekdom. 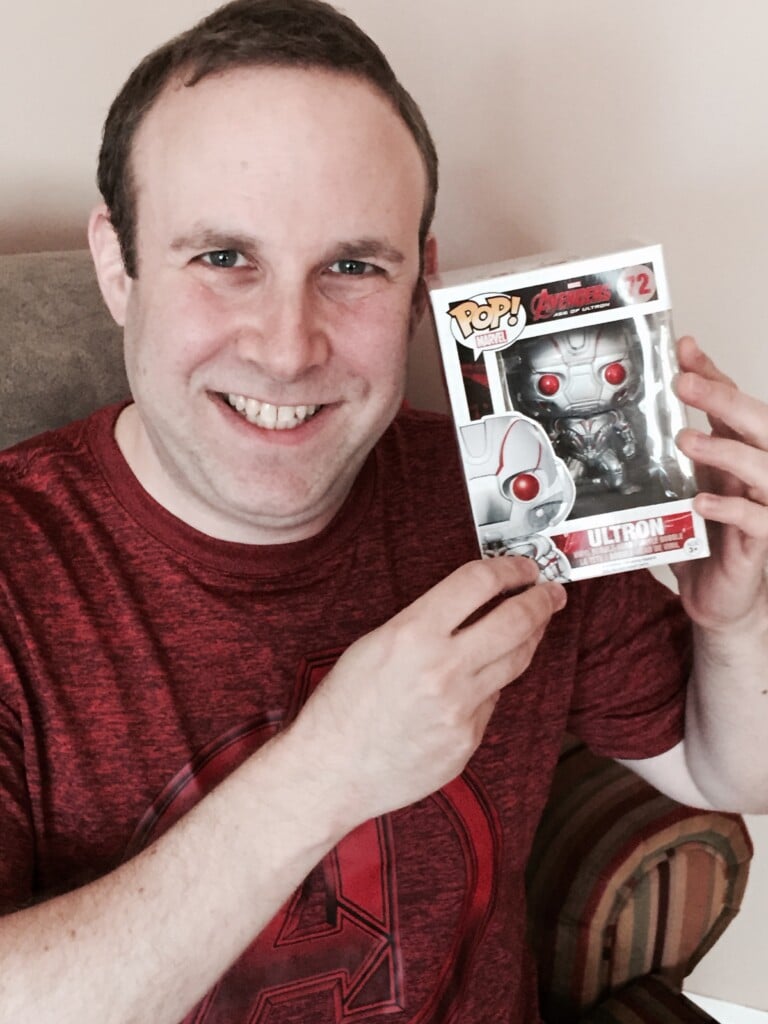 How adorbs is this itty bitty Ultwon bobblehead figure from POP!? 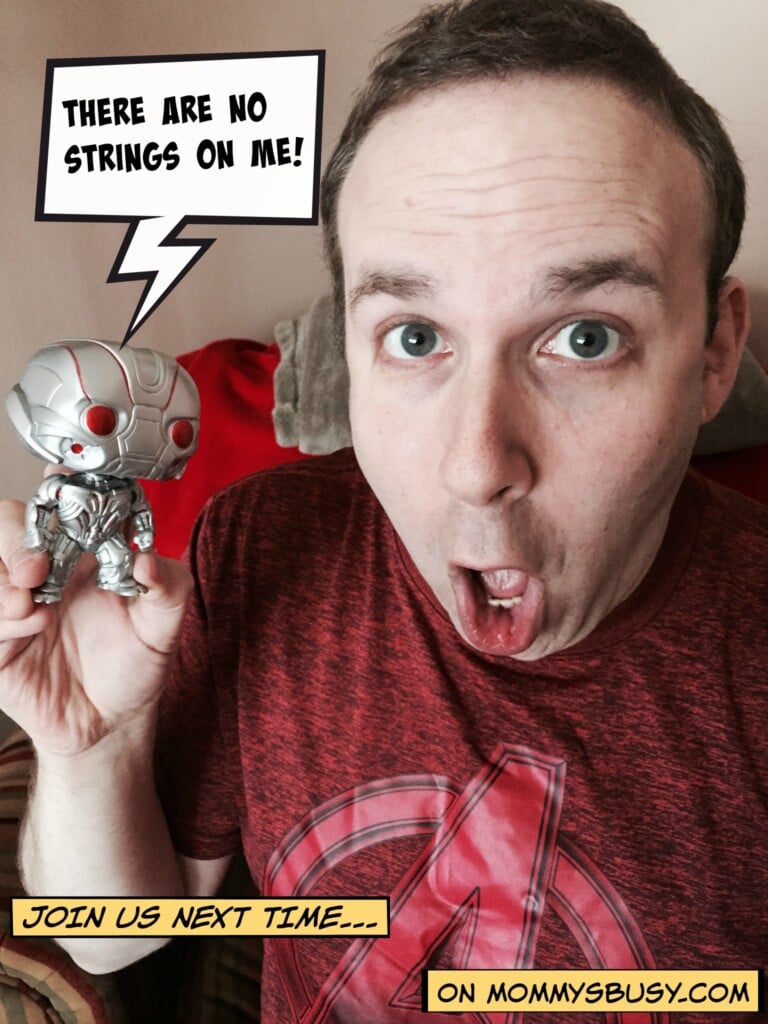 Adorable, that is, until he tries to eradicate me and the entire human race!

Ultimately, I spent the rest of my budget on a few T-shirts for myself. Half my closet is already chock full of Captain America tees, but you can never have enough Avengers, am I right? 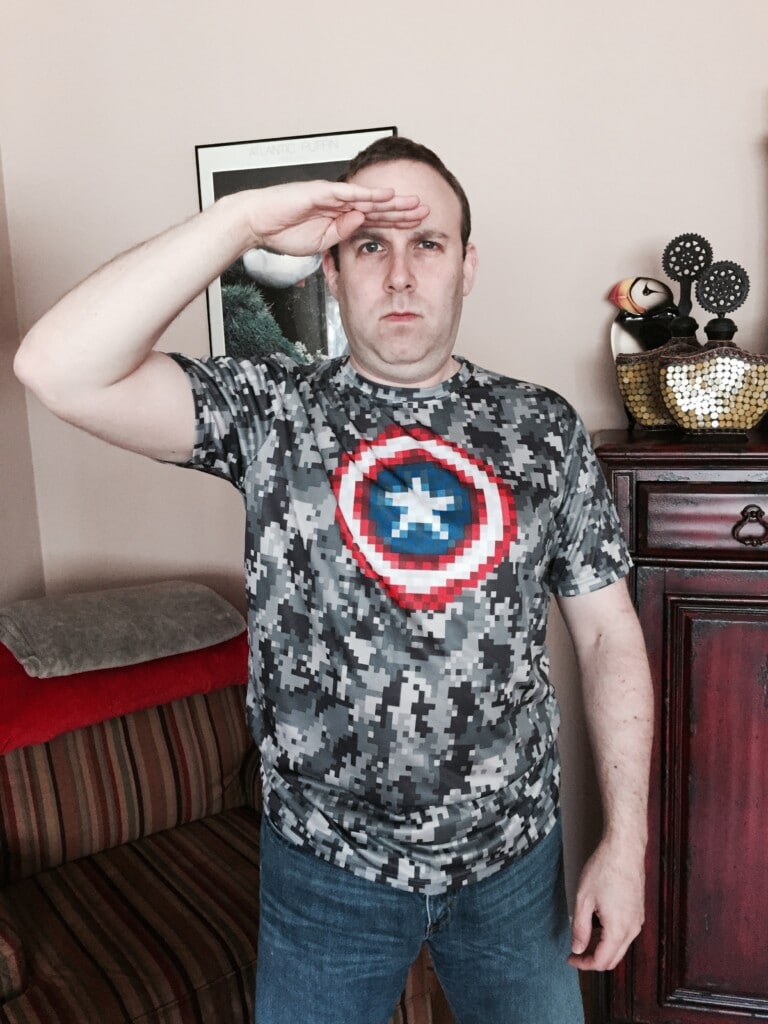 Seriously, I must have about 11 different Captain America shield shirts. I honestly thought I was done and there’d never be another variant worth getting. Until I saw this cool 8-bit camo-style one! Kind of reminds me of Minecraft a bit too. 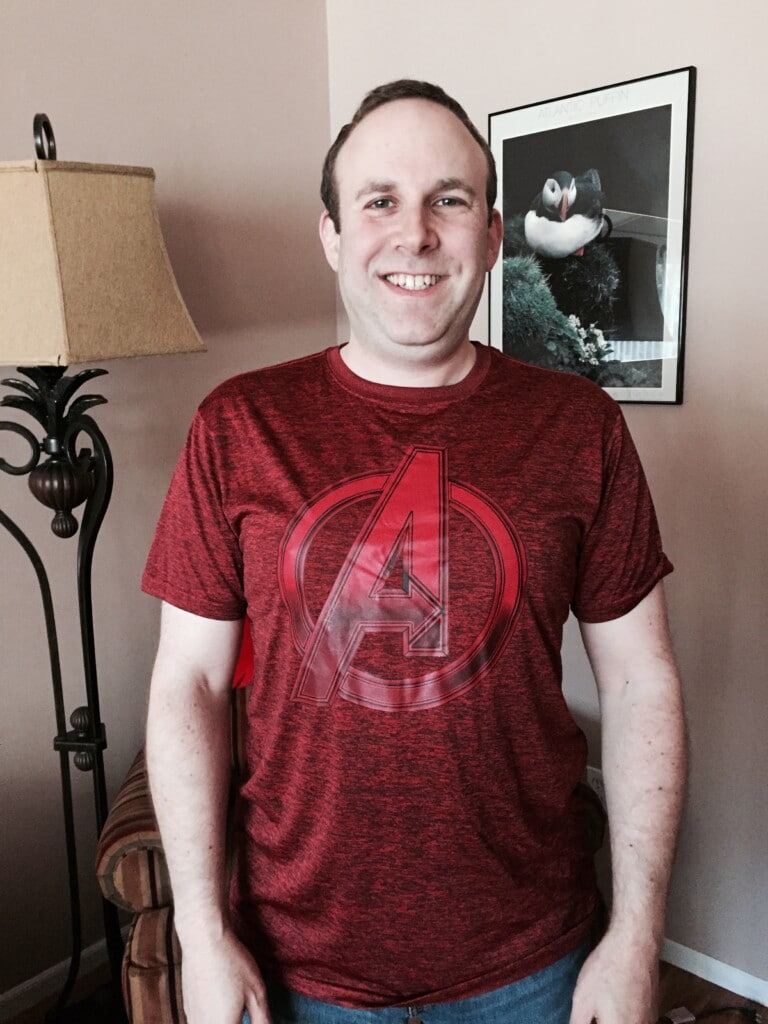 Most of my shirts are black or navy, so I’m happy to add a red one to the mix. Really digging the look of this one. 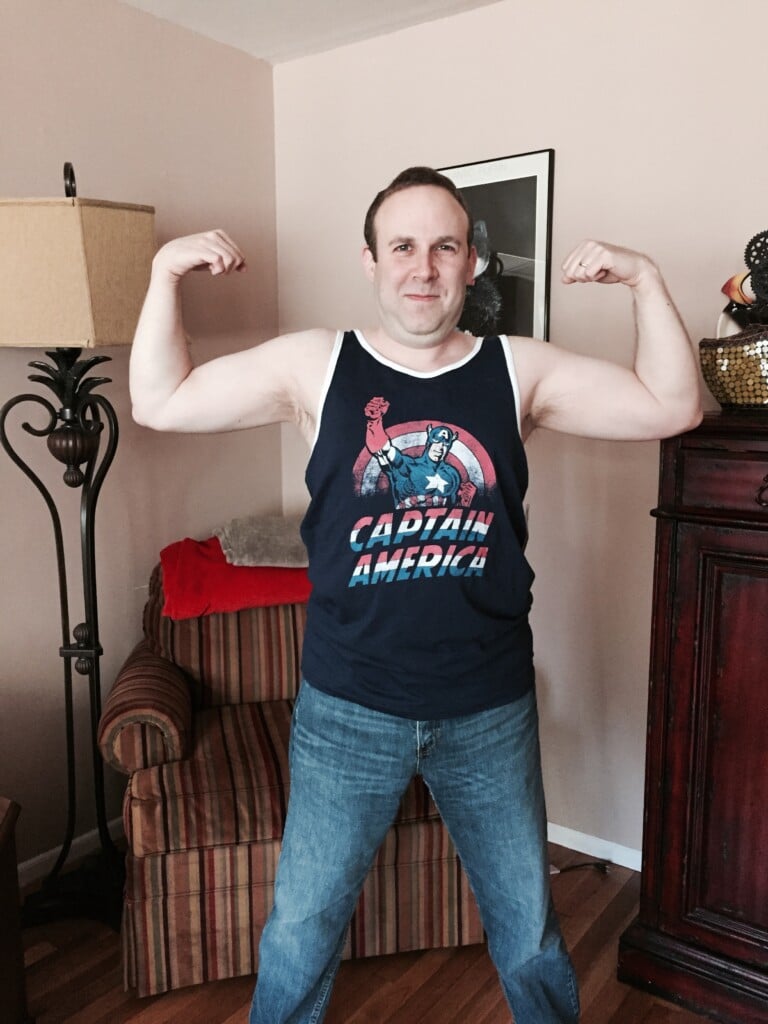 And of course, I needed a solid Captain America tank top. You know, for the big gun show. WaBAM!

Now besides being loaded with great Avengers products throughout the entire store (I even saw an Avengers fishing rod for kids!), Walmart has gone the extra mile. Apparently they’ve got Tony Stark himself working over there, because they put together a very special Super Heroes Assemble app (Google Play | iTunes) to help guide you on your Super Walmart Shopping Adventures! 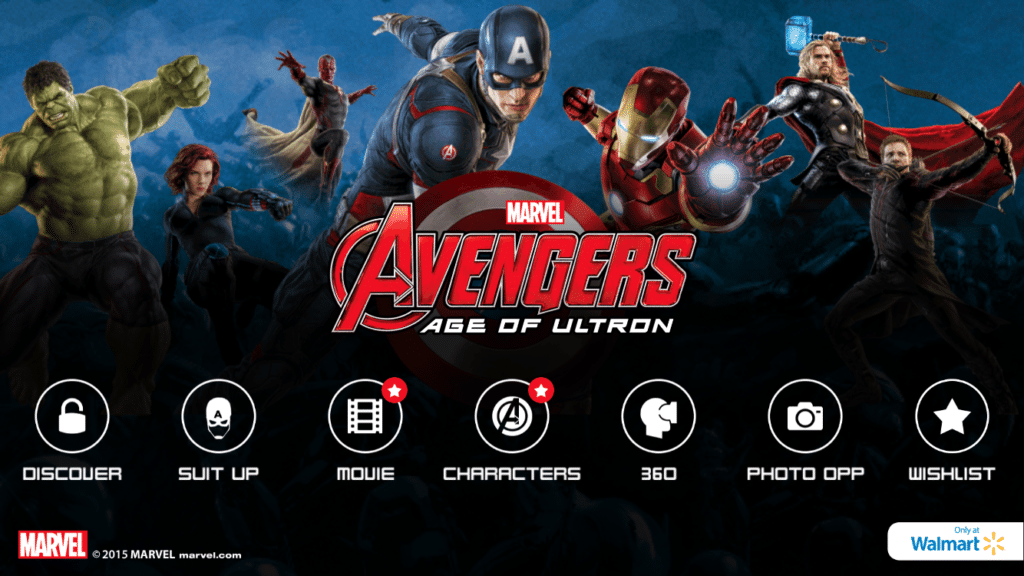 The app is just chock full of pictures, bios, info and loads more. You can even  use it to hang with your favorite Avenger! 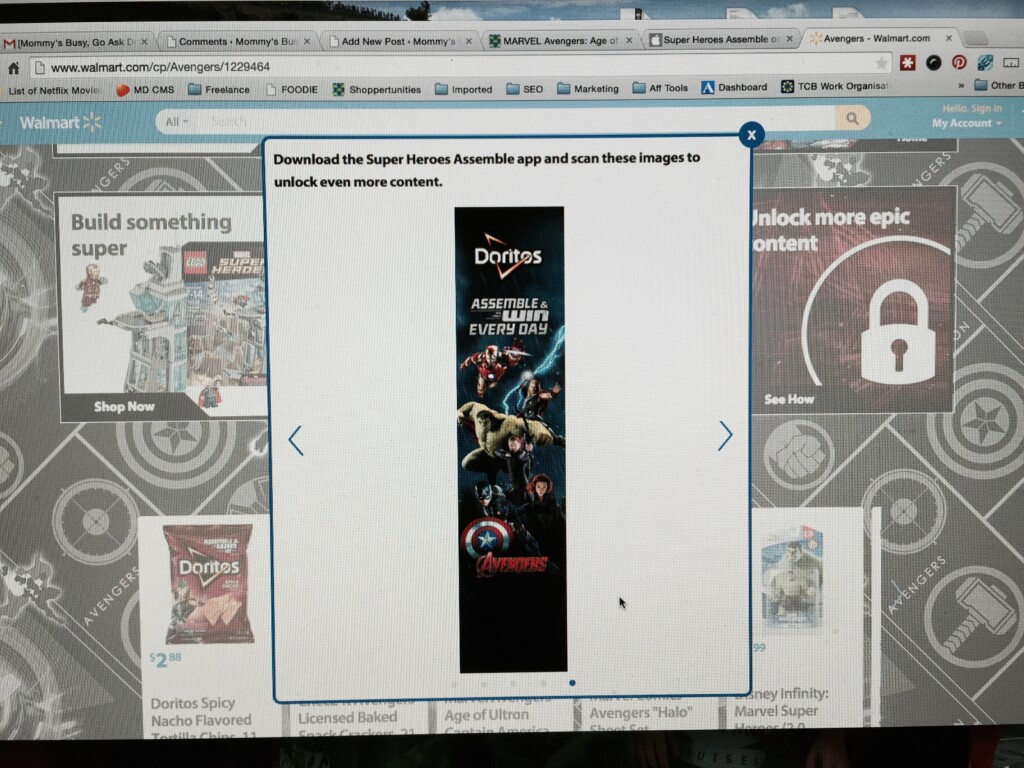 Once you’ve downloaded the app, one of the super neat things you can do is visit Walmart and start hunting for Avengers promotions throughout the store. You can also go online to Walmart.com/Avengers. From the website, just scroll down the page until you see the UNLOCK MORE EPIC CONTENT module. Click there and watch the fun begin!

Whether you’re in store or online, just find a different image and point your smart phone at the picture itself. That’s all you need to do to start unlocking various characters. 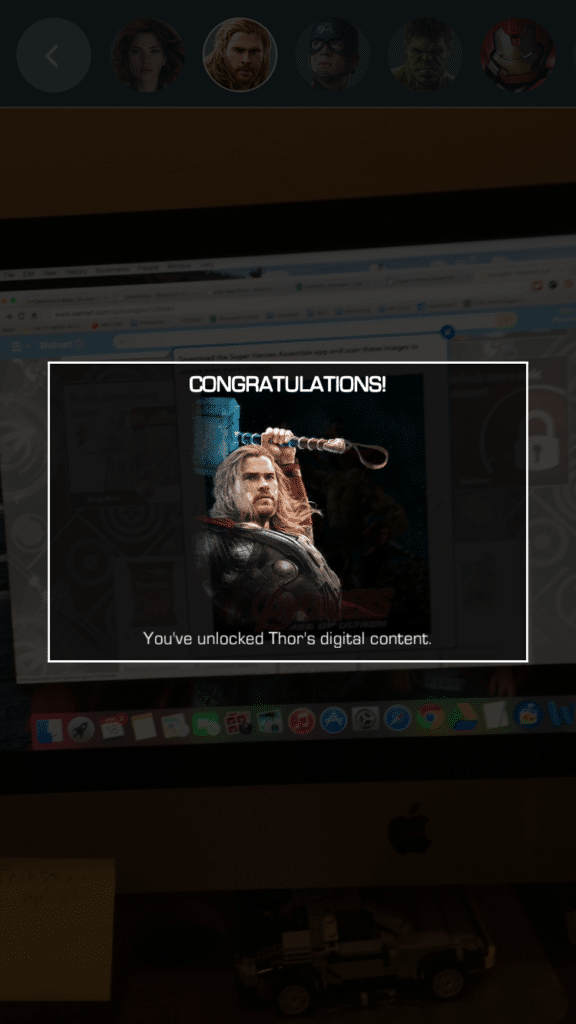 With each scan, you’ll get a nice success message informing you that it worked! Each character’s headshot offers up tons of character info for you. 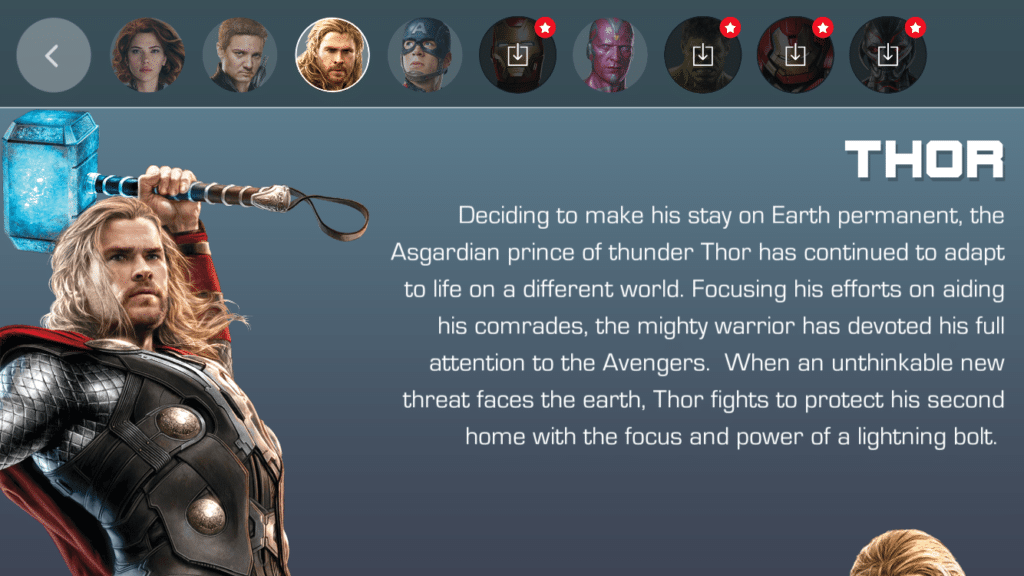 There’s basic character bios, though you’re already an expert on all things Avengers, aren’t you? 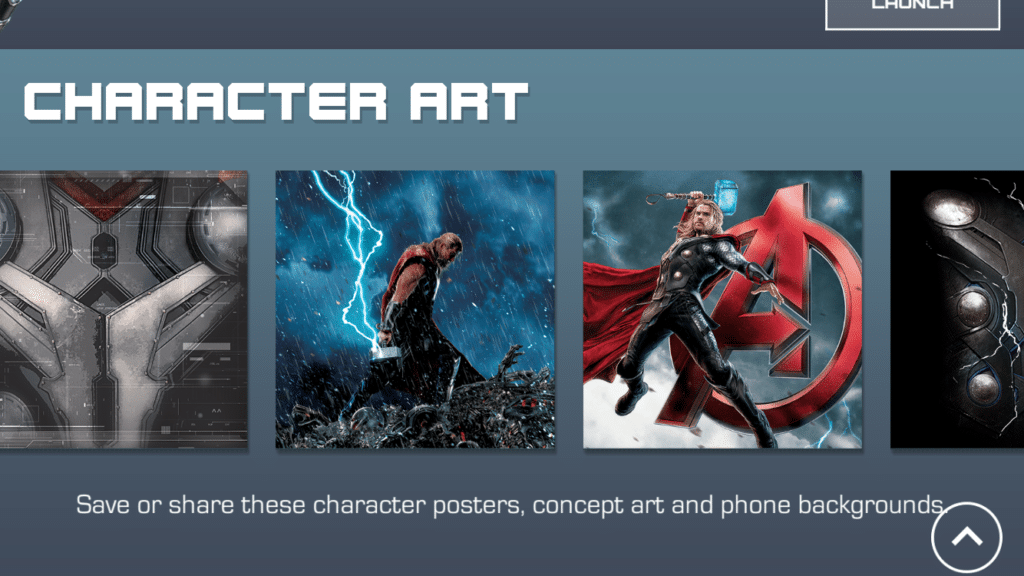 There’s also some real neat artwork for each character that features posters, concept art and even backgrounds for your phone.

The absolute coolest thing, though, is when you click the PHOTO OPP button on the app. When you scan different images over the real pictures in the store (or on your computer), your favorite Avengers characters pop to life! 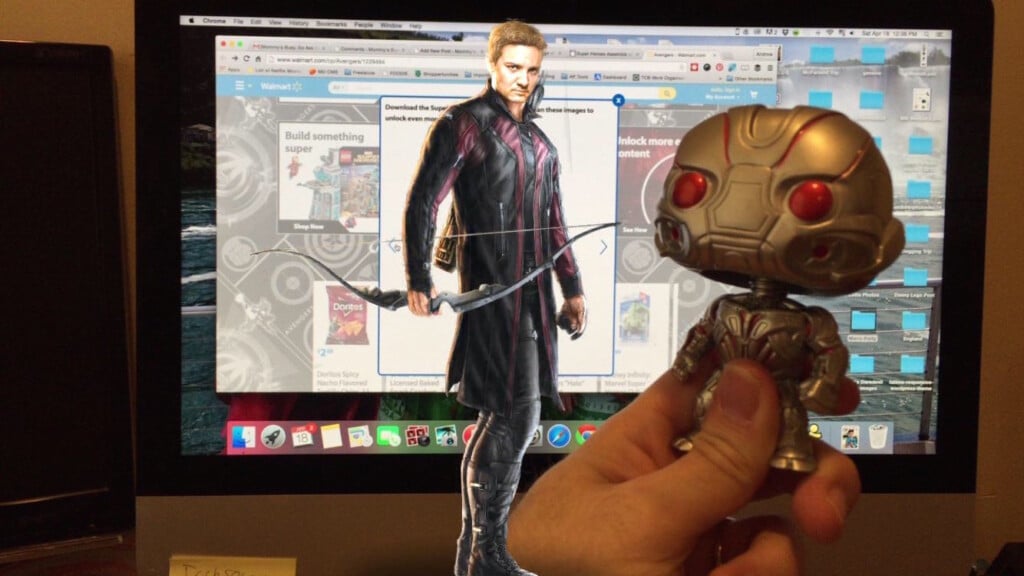 Here’s Hawkeye standing on my arm as Ultron Bobblehead looks on suspiciously! 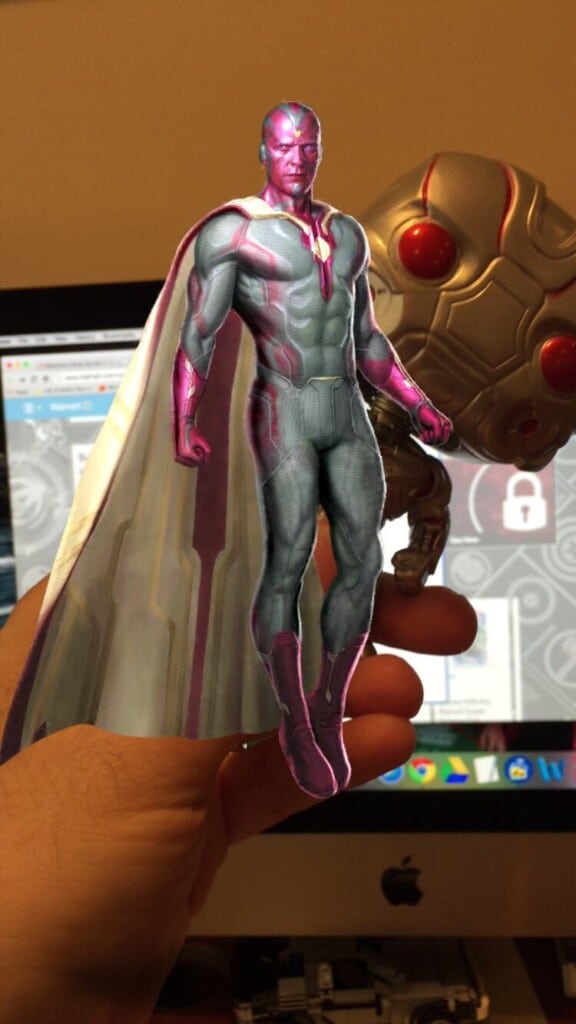 The Vision floats in between my camera and my hand! Spooktacularly cool! 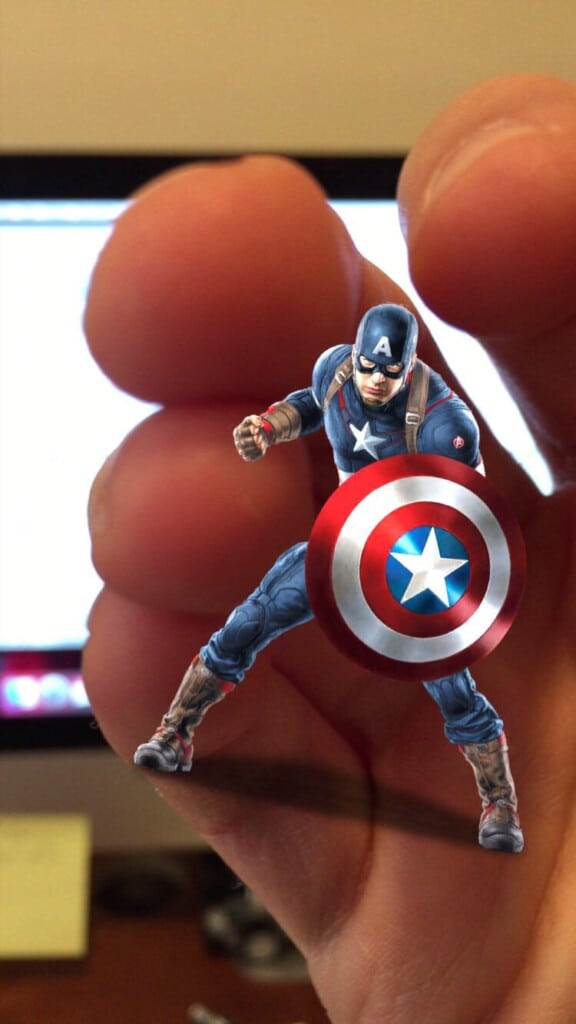 My buddy Cap actually hangs out in my hand. I even moved it a bit and you can jostle the character around too. Definitely worth playing around with!

But the absolute coolest of all has to be the SUIT UP button. This feature lets you take a quick photo of yourself and then you get to play the ultimate dress up with your favorite superheroes! 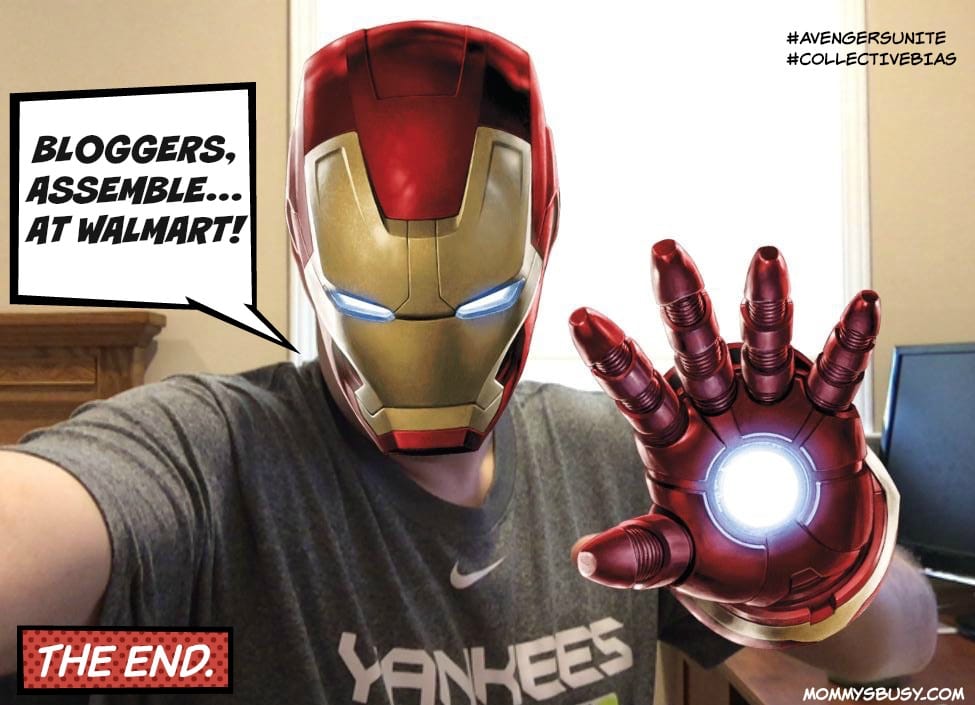 Get your team over to Walmart asap and stock up on all the latest MARVEL’s The Avengers: Age of Ultron goodies you can find. Be sure to use the Super Heroes Assemble app too! Trust me, you’re so going to have a blast!