For over a year, we’ve been trying to get Ryan to ride his bike. Sure, when he had training wheels it was easy and he rode it as much as any other kid. But last summer, we popped them off and… got nowhere.

Jason learned when he was 9, and Ryan turns 9 this summer. So as the weather’s gotten better, we’ve tried a few times so far this year and he’s definitely shown a bit more balance. And he owes it all to his scooter.

Pretty much every morning before the bus shows up, Jason and Ryan hop on their scooters and race up and down the driveway. (They do crazy “tricks” which are nothing more than Yoga poses, like “Tree.” It’s pretty funny actually.)

I watched Ryan last week and he was doing some real sharp turns and long wide ones without even putting a single foot down. He had balance down, no problem.

So I tried him on his bike and he did a little better than the end of last year. Still a little scared, though. Apparently my wife has the magic touch though, because she took him out on the driveway yesterday.

Despite his fears, he tried. And while I was sweeping the pollen off the driveway, Allie casually kept repeating, “Uh, daddy? Daddy?” I look over and there’s Ryan… on his bike… without anyone else holding him up.

He didn’t realize it of course at first. Then he made a complete circle and we told him. You should’ve seen the giant grin on his face. And ours, of course.

Ry spent the next hour or so just going around the driveway and eventually on to the road with Allie as they went up our big hill and around the neighborhood.

After lunch, I  loaded up all the bikes on my car and we all drove over to Rockland Lake, a beautiful park with a 3-mile walking/biking trail. I took off with Jason, as Allie stuck with Ryan.

Jason and I made it all the way without stopping, which is a feat unto itself since Jason normally complains to no end when there are no electronics involved. But we made it and it was really  great riding around with him. We stopped back at the car and waited for Allie and Ryan.

I figured Ryan and Allie had gone maybe about 1/3 of the way around and then they’d slowly make it back. So I texted Allie to say we made it to the car, and was shocked at her response. 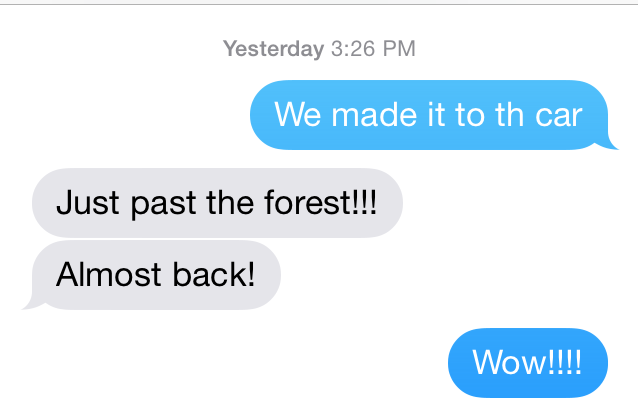 It took another 10 minutes or so but there they came. On their bikes! My little guy who couldn’t ride at all a day ago, suddenly was riding up and down hills in our neighborhood, and just knocked off a 3-mile bike ride.

When Ryan puts his mind to it, he apparently can do anything. Now I can’t wait for all four of us to go on a full family bike ride, side by side.