As inspiring a film as McFarland USA is (and it is truly inspiring if you read my review!), the cast itself is just as amazing. Seven young Latino actors take center stage next to a seasoned vet in Kevin Costner, to bring the true story of the McFarland High School cross country team to the Big Screen.

Just as McFarland’s students were unknowns, who quietly and humbly tried to make a name for themselves by simply holding each other up and doing the best they can, these incredible seven actors did exactly the same thing.

You may not know the names of Carlos Pratts. Or Hector Duran. Sergio Avelar. Johnny Ortiz. Rafael Martinez. Michael Aguero. Even Ramiro Rodriguez is probably new to you. But after seeing McFarland USA, you can certainly expect more than a few of these stars to rise.

At the gorgeous W hotel in Los Angeles, I had the honor of meeting and interviewing the amazing McFarland USA cast. And just as I was humbled by the real Jim White and Diaz Brothers, meeting these seven young men was an experience I’ll never forget.

It’s clear that none of this has really hit any of them yet. They’re still bright eyed and bushy tailed and enormous smiles filled their faces as they walked into a room of 25 applauding bloggers. Soft spoken and relaxed around each other, the seven actors truly expressed their gratitude for being part of this film and really formed a bond with each other.

They seem like seven good friends, no even more than that. It’s like a family of seven brothers, with Carlos as the oldest keeping everyone else in line. Read on to get a taste of what makes these stars shine.

“McFarland, USA” is inspired by a 1987 true story, in which an unlikely band of inexperienced, under-equipped, young Latino runners with exceptional determination rise to become cross-country state champions under the leadership of their coach, Jim White. Over the years since then, the McFarland High School cross-country teams have won nine state championships and the small school is considered a powerhouse in the sport.

Three out of the seven young actors on the team in the movie are from the McFarland area—Sergio Avelar and Michael Aguero are actual runners and Ramiro Rodriguez was a champion soccer player.

The production took the cast and crew to some of the most beautiful spots in Southern and Central California, from Lake Castaic to Malibu to the Griffith Park Observatory, in addition to the fields and neighborhoods of Bakersfield and McFarland.

On how movies are different from TV:

“Doing a movie’s so different than TV. TV’s very fast and you have 60 pages when you shoot a pilot, so you don’t know where your character’s going to go. But when you do a movie, you have a beginning, middle and end. So within these 120 pages, I create my arc. You have a lot of trust in the script and you get to explore. I think you have a little more confidence in whatever you’re doing in the film, as opposed to TV.” 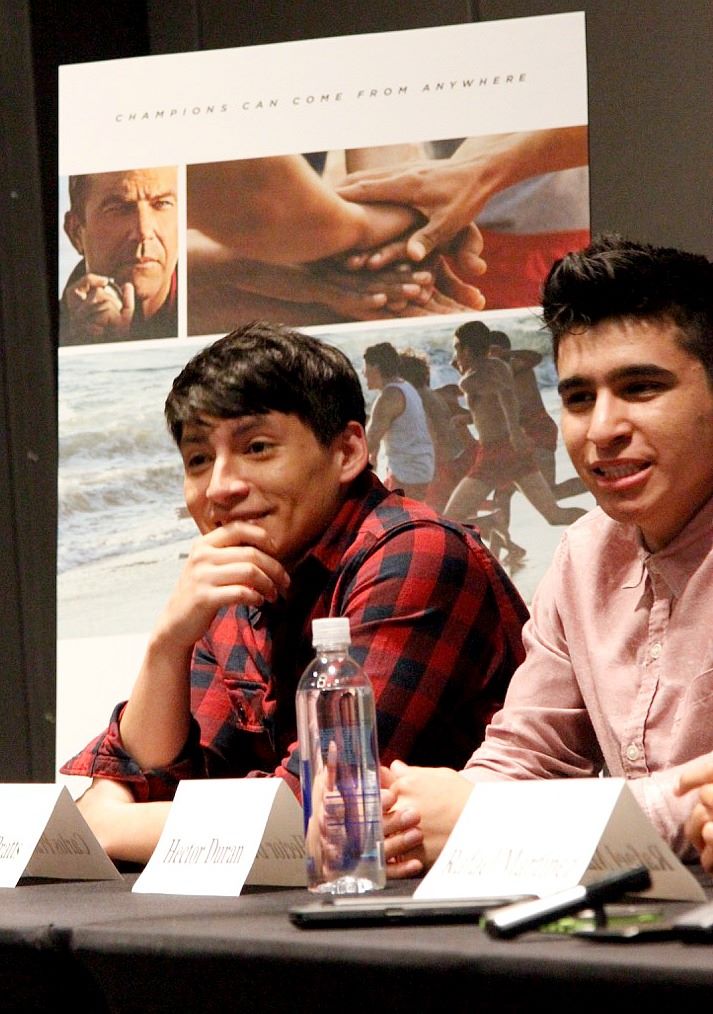 On filming in McFarland, California:

“The whole period of us filming in McFarland, I got the opportunity to spend time with the real Johnny Sameniego. He’s really a great guy. He invited me to dinner and gave me a tour of the city. It just reflects the people of the community.”

On the biggest lesson learned while filming McFarland USA:

“One of the biggest things I’ve learned throughout this film is the idea of equality and not judging a book by its cover. As you see in the film, Kevin Costner comes into this small town, and kind of judges the book by its cover. But once you get deeper into what’s really happening and all the values that are there, you see that everybody’s equal. Everybody had their own opinions. The only thing that separates us is the color of our skin, so we should try to treat each other equally.”

On the chemistry between the actors of the McFarland USA cast:

“The chemistry you see on screen is exactly what we are in real life, if not more.  We love each other as brothers and we never lost that connection. When they said cut, it was still there.” 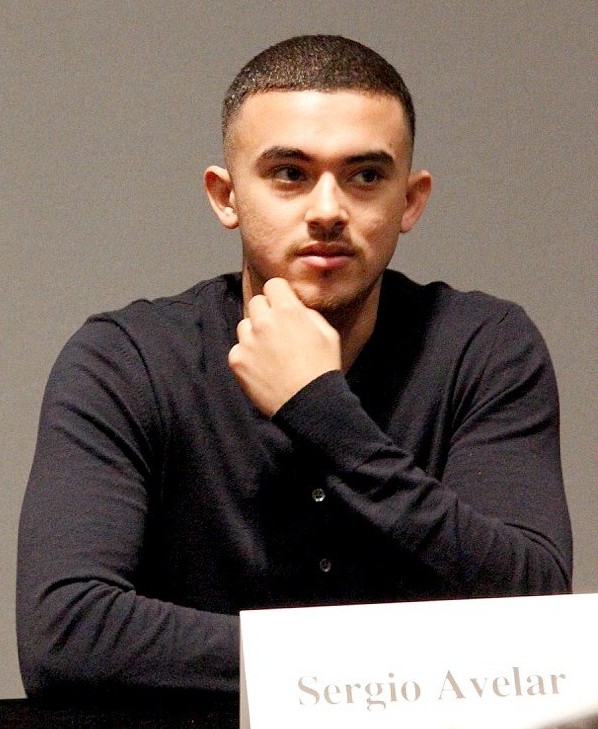 On being from McFarland, California:

“Now people are actually kind of proud saying that they’re from McFarland. Back then it was, ‘Where are you from?’ I’m from McFarland. ‘Where’s that at?’ Oh, you know, between Bakersfield and Visalia. ‘Oh, that town that smells likes cows as you pass?’ [LAUGHS] But now, it’s like people are so proud. Now they say that if someone asks you where are you from and they say McFarland, they’re not going to believe you now. It’s a movie. It’s so crazy. It’s truly a blessing.” 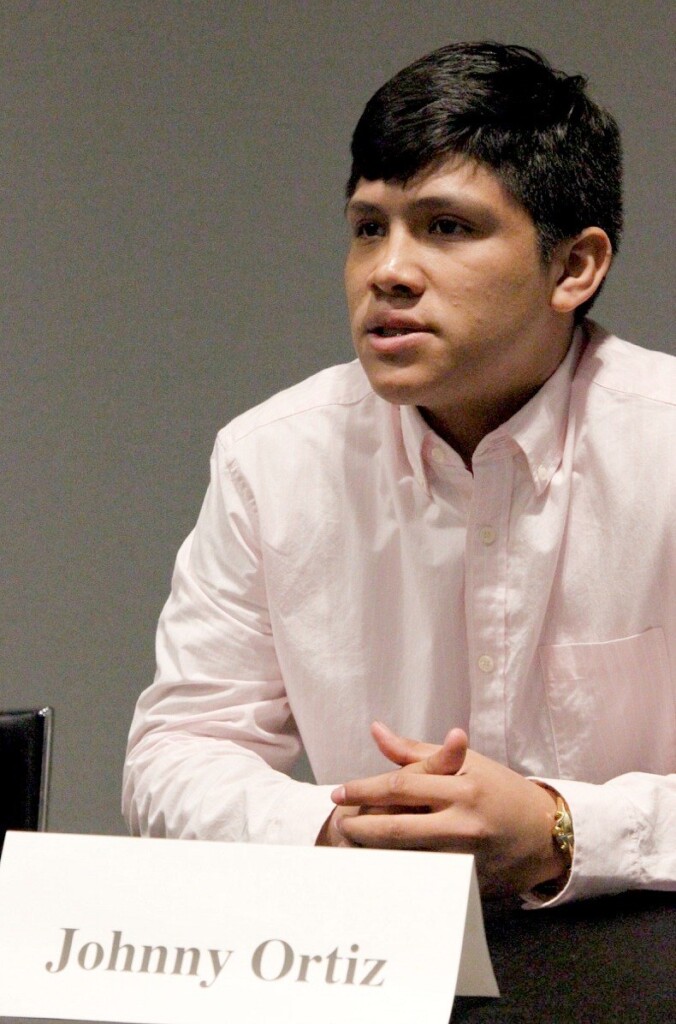 On all that running:

“I want to share something. I remember being 5 years old and I called 4-1-1, and asked how do I become an actor? My dad looked at me and was like ah, my adorable son. I can’t help him out because he didn’t know how the industry worked. But I wanted to say dreams are possible. Goals are possible. Because I got in McFarland. It’s a blessing to land on my own TV show called American Crime with Oscar-winner John Ridley. So that’s coming on March 5th. I’m blessed, you know. I’ve got other roles coming up, and you just want to tell people that dreams are possible because I came from gangbanging world.”

“Most of my whole family are gangbangers, and I broke the chain. I decided, you know what, I don’t want to go through that path. I don’t want to live that life. So if I want to do that, I got to put my mind and my heart. I’ve been in and out of jail in my past. There’s struggle out there, and we got to help these kids out, show them that there’s a lot of kids out there that have talent, that have a lot of heart. They just don’t have the opportunities. That’s why this place is like Casa 0101, which is a non-profit organization. Josefina Lopez, who wrote Real Women Have Curves, is the founder of this place, and she brought me into this theatre and showed me that I can do it in life. And this is what we need. We need places like this. We need resources.” 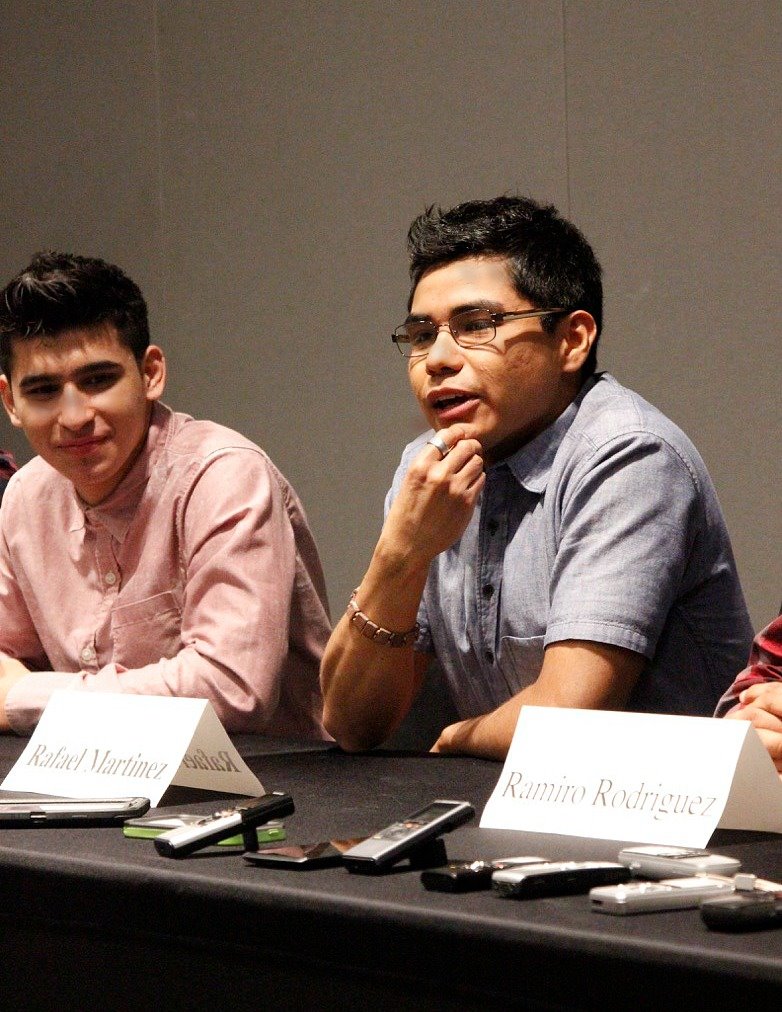 On future plans after McFarland USA:

“If you guys are wondering, I want to say I know what I’m going to do next and what’s next for me. But I’ll be very honest. I don’t really know. ” [LAUGHS] 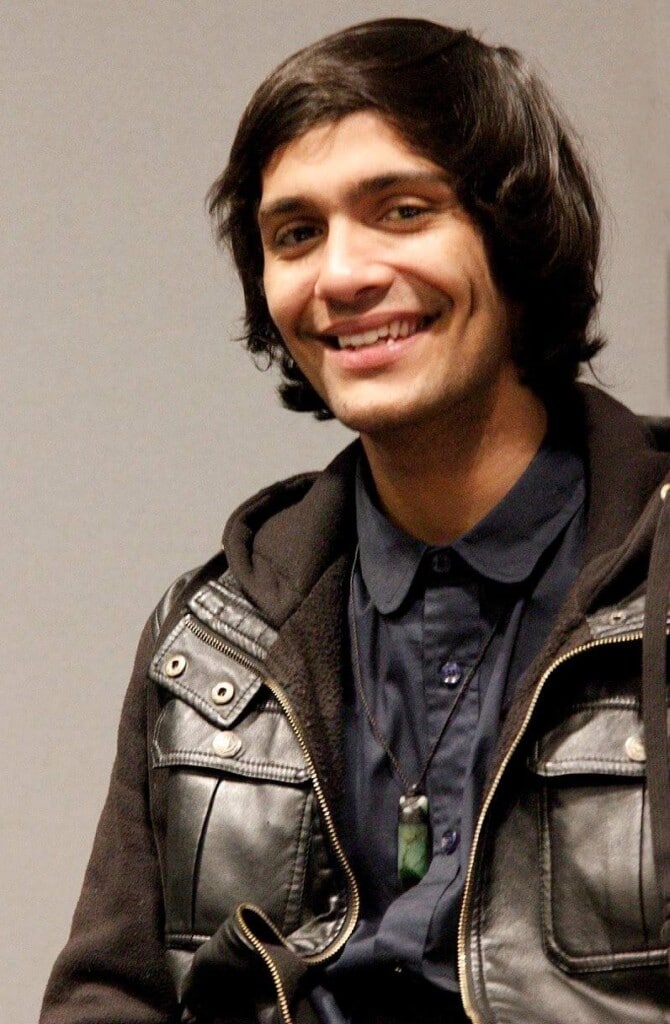 On visiting the beach for the first time in his life:

“It was a fun beach trip until he said, ‘everyone go run in the water. ‘ [LAUGHS] We’re sitting here in tank tops and booty shorts. So we’re like are we going to get wet? Okay, everybody jump in the water. It’s like pins and needles all through your legs, all through your body. With every other take, they usually say you’ll get more used to it.  No, you don’t. [LAUGHS]

On his fellow actors’ support: 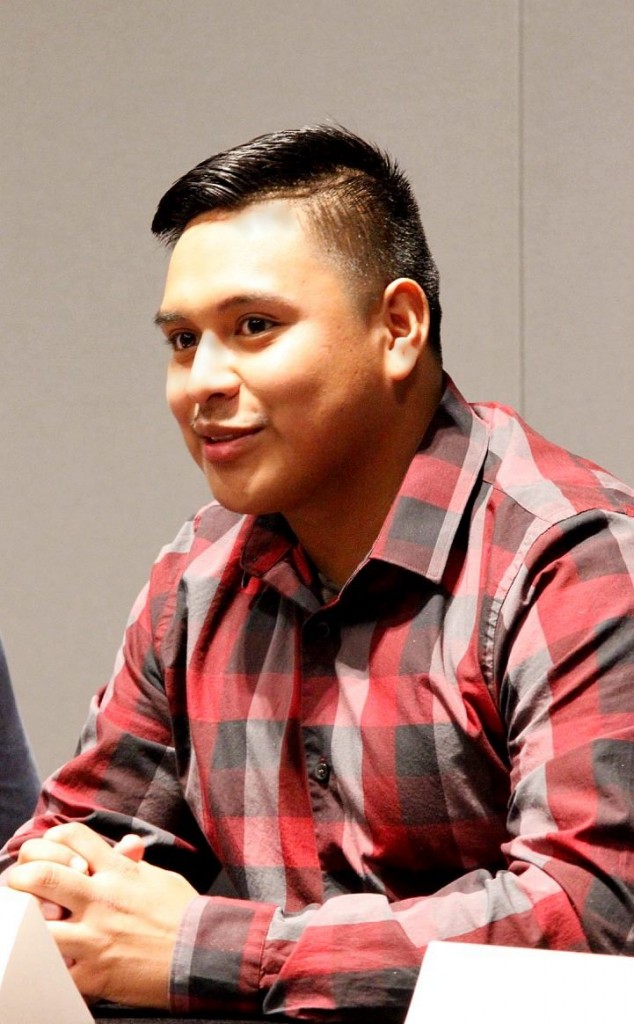 On how McFarland, California has changed:

“It’s amazing. The town has changed for the better. There used to be a lot of crime back then, like gangsters and stuff, but now it’s really holding down its spot, for the national spotlight. It’s really coming together and being a community, like how it should be.”

On training for the film:

“Throughout high school and pretty much my whole life, I’ve been the chubby one, and in this movie, I see it a lot. They picked on me. I mean, in the movie I know it was a joke. And, I mean, yeah, they could tell me that I’m fat.  But to be honest, in real life, it really did hurt me. But for him [Danny Diaz] to triumph the way he did in the movie, it’s really a triumph for me also. He proved everybody wrong that a big man could do it. It showed me also that I could do it too.” 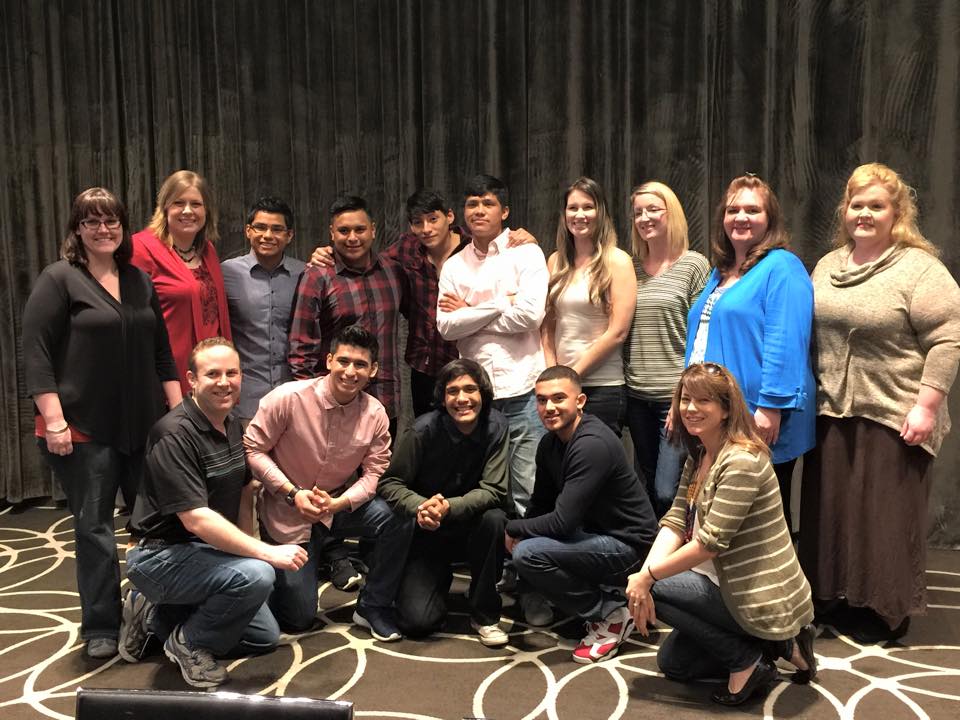 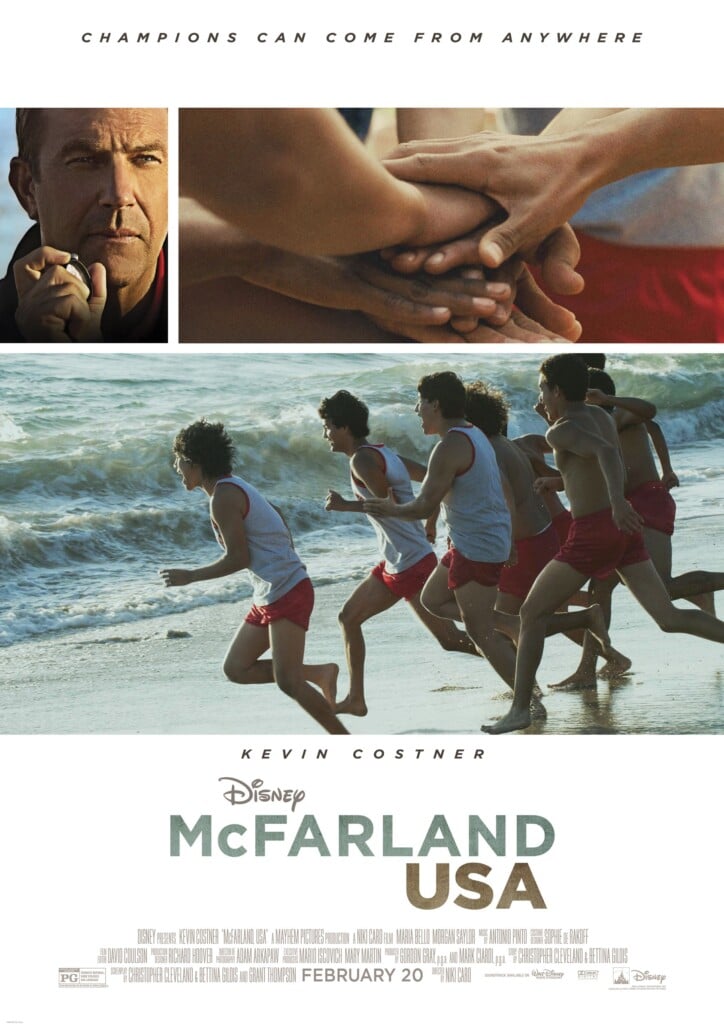 Unless otherwise stated, all photos from the amazingly talented Silvia of Mama Latina Tips