I have to hand it to the Food Network. They really do an excellent job of coming up with enough programming for an entire network, day in and day out. I remember growing up with the occasional cooking segment on various morning shows and that was about it. Now we’ve got shows for every type of food, food emergency or even explaining how food is made.

And then there’s the latest show that I’m actually pretty pumped for. Crazy-haired, down-to-Earth Guy Fieri is back with a new cooking/reality/game show. It’s called Guy’s Grocery Games and it features some insanely entertaining food challenges.

Set in a regular ol’ supermarket, four talented chefs will duke it out through a series of three cooking challenges that all involve them working their way through the store. With a very “real world” approach, Guy’s Grocery Games is full of tasty dishes and lots of regular folks type cooking problems. In other words, these challengers will be facing the same cooking dilemmas we all face regularly. (Granted, I’m not even allowed to cook rice in my own house, so I’m more challenged than any of them.) 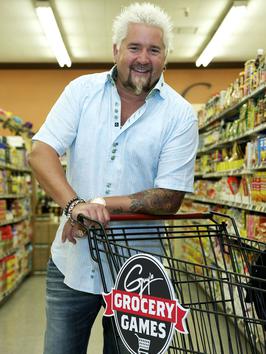 What sort of events can we look forward to? Things like creating a meal on a set budget, cooking using only canned foods, or putting together a meal only with whatever ingredients they can carry in their hands on one trip. I don’t know about you, but these challenges sound a lot like something I’d totally do with my friends when I was younger. Except for the cooking part.

Now, why are these four chefs showing off their skills in this series of wacky challenges? It could be to step into the spotlight on the Food Network. Or to hang out with show host Guy Fieri. Or, it’s highly doubtful, but maybe they want to win the game and take home a prize of up to $20,000. Yeah, they probably just have nothing better to do.

Guy’s Grocery Games premieres on the Food Network on October 20 at 8pm.