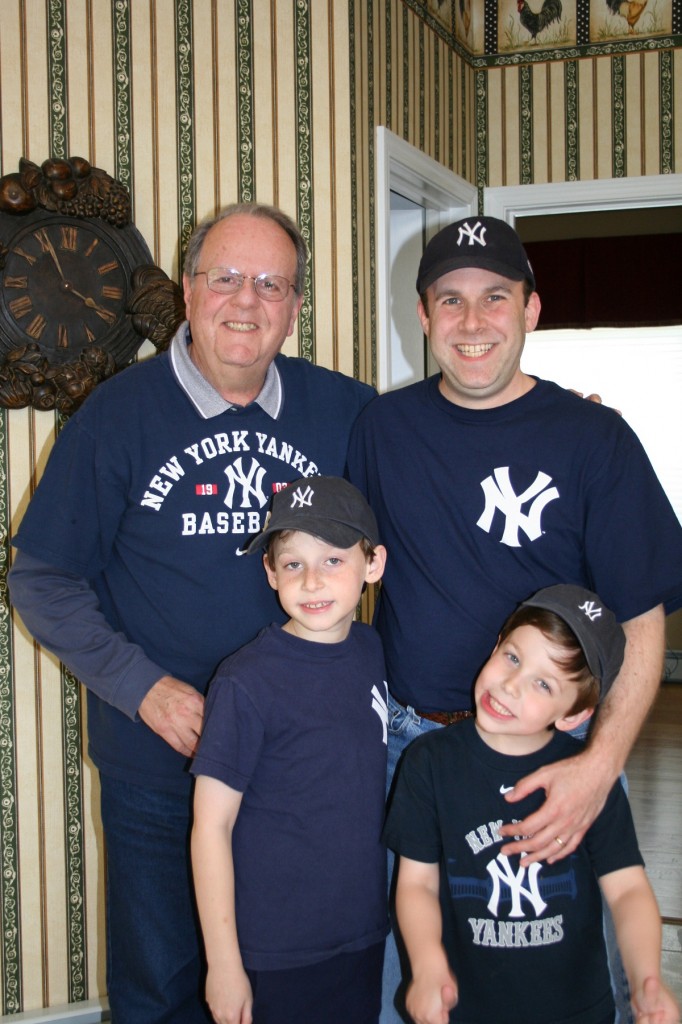 Today is my dad’s birthday. He’s 70 years young. It’s funny, when you’re little, even hearing that someone is 30 or 40 years old sounds ancient. Fifty or 60 is crazy old, and anything beyond that is nursing home city. Now that I’m 40 myself, I don’t feel that old. I still feel young inside. And no way do I picture my dad as 70 either. Luckily, he’s still in great shape and doesn’t look a day over 55, maybe 60.

1. I broke my dad’s nose – This one’s a biggie. I was in elementary school and had just started playing Little League. We were having a practice and my dad decided to help catch. I was up and hit a foul tip right into my dad’s face. Blood gushed out and he went off to the hospital with my mom, while I was left wondering if somehow I just killed my dad. He came back later with a bandaged-up nose and even thanked me because he’s always had sinus problems.

2. Bike riding for cupcakes – On the weekend when I was younger, it was always a special treat to get up early and hop on my bike with my dad for a ride. We’d go real early on a Sunday usually and hit some main streets, which weren’t so crowded at the time. We’d make it to some convenience store somewhere and he’d get a coffee and I’d get a package of Hostess cupcakes.

3. Follow the blaze – I did a lot of hiking with my dad as a kid too. We grew up near Bear Mountain in NY which has some beautiful hiking trails and big clearings that overlook the Hudson River. We’d usually pack a lunch and at times my sister would come or I’d bring a friend and we’d just hike through the woods following the different blazes on the trees, eventually stopping to eat on a huge flat rock with a gorgeous view of the Bear Mountain Bridge.

4. Having a beer – After I graduated from college, I went on a six-week backpacking trip through Europe. I remember it was the day before I was leaving and my dad took me out to dinner at our favorite local pizza place, Martio’s. The place was packed, so we just grabbed a seat at the bar instead of at a table. We ate and we both ordered a beer. Neither of us were huge drinkers, but like most kids I had my share in college. But that was the first time I really sat down and enjoyed a beer with my dad and actually talked. I don’t remember a thing we talked about, but I do remember it was a very real, legitimate conversation.

5. Gone fishing – My dad used to fish a lot when we were kids too. While sticking a worm on a hook isn’t my idea of fun, I do remember him teaching me how to cast a line and reel it in. I only remember actually catching a fish once, and we did toss it back.

6. The biggest Little League fan – I played in Little League until I hit the age limit. I was atrocious at first, but by the end was a great fielder and a solid hitter. (Not a power hitter, but I had a great on-base percentage). Yes my dad worked but if it was the weekend or a late game during the week, he was definitely at the game cheering me on. He wasn’t one of those dads that would berate me for dropping a ball or striking out. He cheered me on, or cheered me up depending upon the game.

7. Porky’s – I must’ve been about 12 or 13 at the time and we went to a local video store to rent a movie together. My friends and I had seen the commercials for Porky’s and were dying to watch the R-rated classic. I showed it to my dad and he thought it looked funny so he rented it. The woman at the counter looked at me and then back at my dad and said, “You know this is R. He’s too young for this.” My dad acknowledged her and went home to watch it. We laughed a lot and then at the shower scene (Yes, finally!), my dad actually said to me, “Andrew, I don’t think this is appropriate for you.” And I responded like any hormone-raging pre-teen would… I said nothing. And dad said nothing more. And we watched the rest of the movie together.

8. Torture by food – I have no idea where we were and who we were with but were at some Korean restaurant with friends or family members. The waitress brought Kimchi to the table for everyone to sample and I was curious what it was. My dad laughed and said it was insanely spicy and offered me $5 if I tried it. Not one to shy away from a bet (especially if food’s involved), I did. And he was right, it was HOT! My mouth was on fire, and I must’ve guzzled down three or four glasses of water before I could even start feeling my tongue again. But he kept to his word and handed me a crisp five-dollar bill.

9. My first Knicks game again – Back in the ’80s, the Knicks sucked. Like really really bad. My dad would get super cheap tickets and take me to Madison Square Garden to catch a number of games. I remember eating dinner at Beefsteak Charley’s beforehand (all-you-can eat cocktail shrimp!) and then catching the game. Our seats were always horrible. We’re talking nosebleed section. But since the Knicks blew, the Garden was maybe half filled. So after 10 or 15 minutes, every single time, my dad would grab me and we’d walk down as far as we could to the court and grab new seats. And sure enough, every single time, a guard would come over to inspect our tickets. My dad would play the “It’s his first game ever and no one’s sitting here, can’t we just let him enjoy it?” card. And you know what? It worked every time.

10. G.I. Joe #2 – I was a big comic book collector as a kid and my dad was actually pretty supportive of it all, driving me to M&M Comics in Nyack regularly, or searching high and low for garage sales and flea markets on the weekends. But I remember getting into the G.I. Joe comic series from Marvel around issue #20 or so. I quickly snatched up recent issues, but the early ones were getting expensive. I paid maybe $20 or $25 for #1. But the second issue was the super rare one and was going for like $40, if you could find it. My dad worked in Manhattan and he called me up on the phone one day to say he was at a comic book shop downtown and they had the issue for $40. Did I want to buy it. It was the most I ever spent on a single issue and he asked me repeatedly. When I said yes, he came home with the issue that night which proudly took its place in my collection.

I could go on and on and come up with 70 memories but then I’d never get any work done and my kids would be eating baked beans out of a can. And nobody wants that, especially grandpa. So a very Happy Birthday to you, dad. I love you. Here’s to 70 more!