I don’t play a lot of apps on my phone. I usually find something I like (Clash of Clans for example) and just play that one for months until I’m ready for a new game. I’ve played a few of Marvel’s apps before and nothing really clicked with me. That is, until the recent Marvel Snap appeared.

What hooked me on this game is not the usual “gems” to unlock different levels and whatnot (though they are neat), but the basic gameplay itself. Marvel Snap is fairly easy to play in terms of rules, but it’s like a really fun card game. Yes, there is math involved, but thankfully the game does the calculations for you.

According to the official website, the game can best be described as:

That’s the other neat part. You play against someone else and the entire game features six rounds taking only a few minutes. I have to admit that the collectibility factor does add a lot of fun to the game too.

And if the following promo from Nick Fury himself doesn’t hook you, I don’t know what will…

How do you play Marvel Snap?

There’s a great tutorial on the official website. But here’s a quick summary for you. You start with a small set of cards and put together a deck (or multiple decks) of 12 cards to play with. I’ve never been one to really get into the whole deck-building angle usually because the game (like Magic: The Gathering) is extremely complex.

But Marvel Snap’s cards really only have three key elements on them:

Round 1 starts with one point of energy and increases by one, up until the 6th and final round. That level of energy determines which cards you can play from your hand each turn. If it’s round 2, the energy available is two. So you can either play one of your cards with a cost of 2, or you can play two cards that each cost only 1.

As long as there’s still room in a location and you can afford to spend the energy, you can play as many cards as you have in your hand.

What characters are in the game?

The fact that it’s the entire Marvel Universe is what truly makes Marvel Snap such a fun game. I’ve only been playing a few days and I’ve already collected over 50 characters.

I love it when an opponent plays a character I haven’t seen yet (like Elektra!) or when I’ve earned enough credits to unlock mystery cards and get a new character. 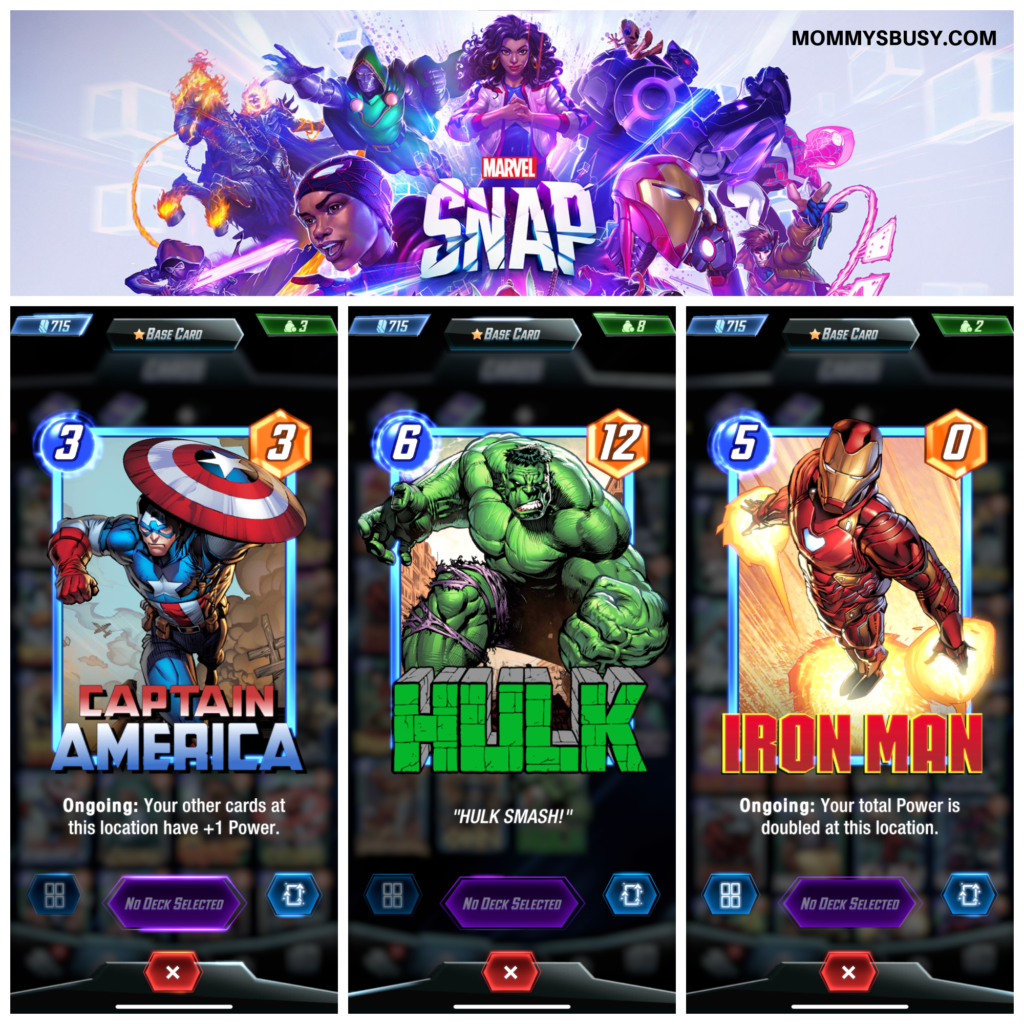 The game does an amazing job of mixing in core characters from teams like The Avengers, X-Men and Fantastic Four, but also crazy obscure fan-favorite ones like, yes, even Squirrel Girl. 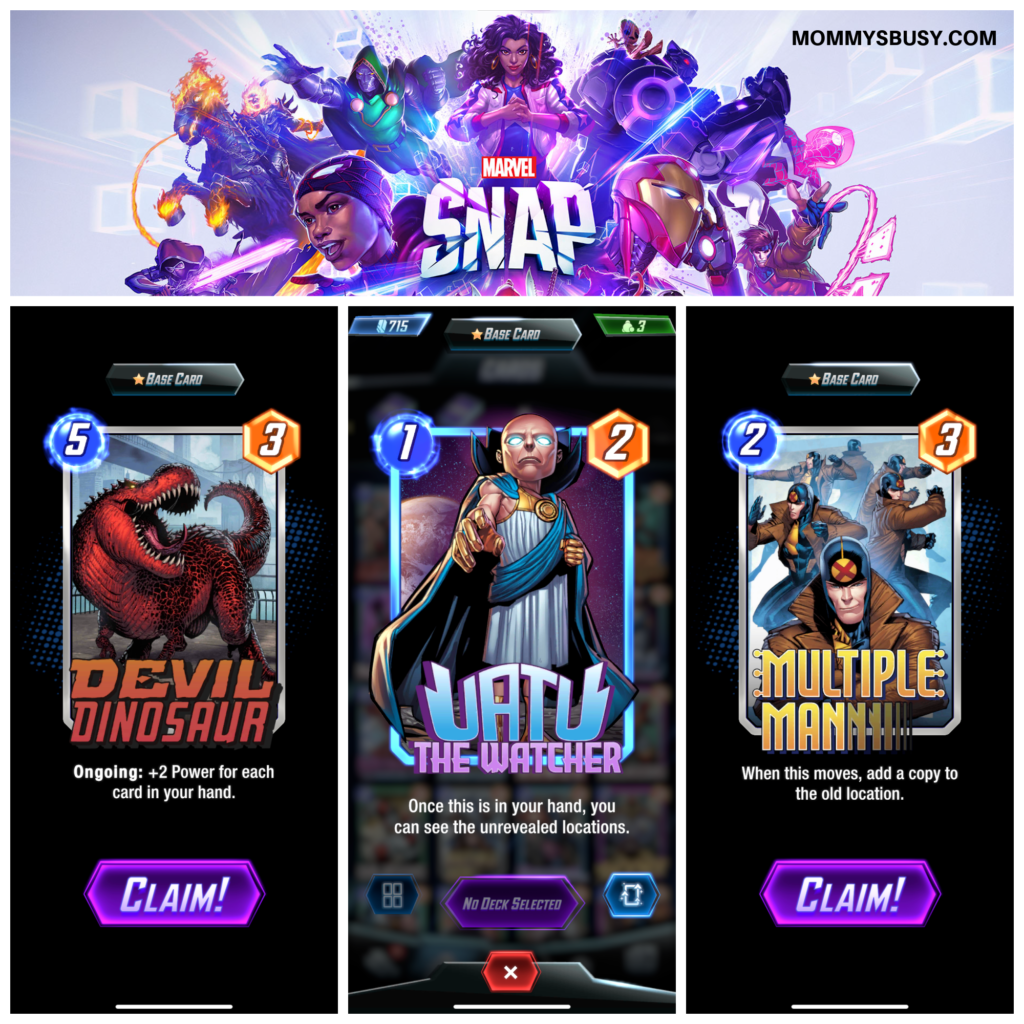 Yeah, I never would’ve expected Uatu or Devil Dinosaur to show up in a game! But they do and they have some pretty fun special abilities.

What are the locations in Marvel Snap?

Another fun part of the game are all the different locations that you play in. The three locations are hidden at first and each one is revealed one at a time over the first three rounds.

Each location has some different ability too. Things like moving all cards to the right after round 5, adding +2 Power to all cards, randomly copying a card from your opponent, and so on.

But it’s also just fun seeing the names of the locations. Everything from The Vault to the Negative Zone are fair game.

There are even some characters with special abilities (like the Scarlet Witch) who can change the location itself which really throws a monkey wrench in the game.

The basic gameplay of Marvel Snap is what has me hooked. It’s like playing the card game War on three different boards at the same time, but you get to add up your points at each board. I love the strategy that goes on behind that.

It’s a pretty simple, straightforward game, but made more fun and complex by giving each character card different costs and power levels. But the special abilities are truly what make the game shine.

Just when you think you’ve won, your opponent can move Nightcrawler (his BAMF special ability lets you move his card one time after being played) from one location to another and he or she suddenly outnumbers you.

And I love how the power levels and abilities are closely tied to the characters. Want to smash your opponent with a 12-point power level Hulk? Awesome. But it’s going to cost you 6 energy, so you can’t use him until the last round.

Spider-Man is average cost and power but his ability is to “web up” the location so your opponent can’t play a card at that location next turn. And to visually show that power, a little spider web is splattered on your side of the board.

There are tons more little things that make the game great too. You’re actually betting “cosmic cubes” against your opponent and you can “snap” to double the bet at any time in the game. You also earn credits, gold and boosters to upgrade cards, buy variants and other neat add-ons.

There are even small avatars that you can use to represent your character and yep, the more you play, the more avatars unlock for you to use.

And then there’s the visuals of the cards. The artwork itself is top-notch Marvel style. But you can upgrade each card visually to go from a flat card to a frame break (image “breaks” the border of the card) to a 3D version and even an animated one.

Marvel Snap has only been out for less than a week so I’m sure there’s plenty more to come, and loads of things I haven’t even gotten to yet.

All I know is I’m currently addicted to this game thanks to its fun gameplay and collectible nature.  The one main feature I cannot wait for though, is the ability to play against your friends. Currently you are pitted against a random opponent. But hopefully soon, you’ll be able to add friends and play head-to-head against them. (I’m PitfallHarry by the way.)

If you’re a fan of card games, apps and Marvel Comics, you’ll definitely want to check this one out. After all, getting the hang of it is… well, a snap.