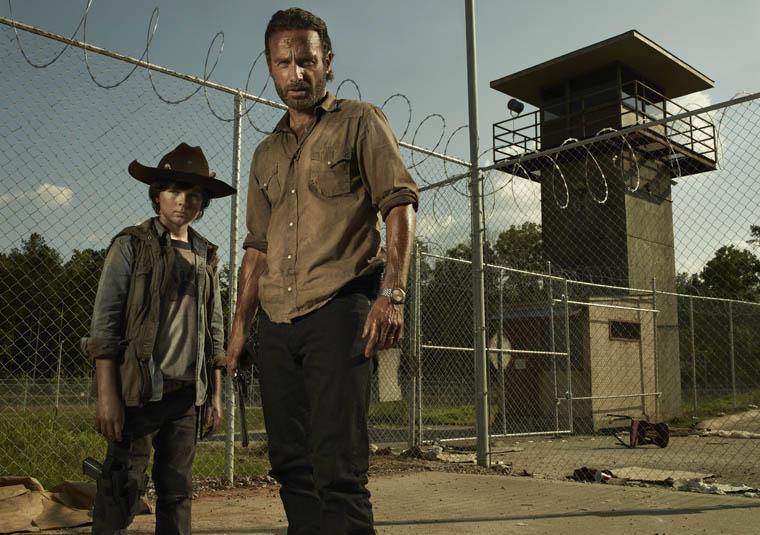 I used to hate zombies. Or rather, was extremely apathetic about them. I worked in the comic book industry and friends and co-workers constantly told me to pick up The Walking Dead. But I never bothered.

Dawn of the Dead Resident Evil. None of this stuff did anything for me.

Then I read World War Z by Max Brooks, and everything changed. (I highly recommend you read the book before the Brad Pitt-starring movie comes out). Written as a first-person journal looking back at the major Zombie World War, I was completely hooked.

After finishing the book, my friend Brian started talking about The Walking Dead. So I borrowed a few trade paperbacks from him. And… HOLY-COW-IS-THIS-COMIC-SERIES-INSANE?!?!? Yes it’s about zombies and they’re crazy and sick, but the story is really about the human condition, and how we all act and relate to one another in a world gone bonkers.

I read probably the first 50 issues of the comic and then learned that AMC would be doing a Walking Dead live-action show. So I watched it with Allie and shockingly, we both LOVED it. We were hooked. Season 1 was awesome. Sucky only by the fact that it was so short.

Season 2 was good but way too slow for my taste. They really know how to stretch a storyline out to exhaustion, don’t they? But as slow and yawn-producing as season 2 was, season 3 has been non-stop action. And last night’s episode (the “mid-season finale”) was insane. On a scale of 1 to 10, this one went to 11.

SPOILER ALERT!!! I’m about to reveal details of last night’s episode. If you haven’t watched it yet, don’t go cursing me out to all your Facebook friends, okay? You have been warned.

Last week, Glenn took a beating and kept on ticking. He’s quickly becoming my favorite. But last night, he 100% secured the spot when he RIPPED A FRIGGIN’ ARM OFF A ZOMBIE, STEPPED ON IT, AND YANKED OUT ITS BONES! He then handed the knife-like weapon to Maggie. That savage display of survival was just the perfect example of what this show’s all about.

Of course, seeing Maggie use the “arm knife” to kill one of her captor’s right in the neck was pretty stellar too.

Then there’s the Governor. This Guv is a bit different from the over-the-top one in the comics, which is good. He still has the heads in the fish tanks and his zombie daughter, which is awesome. And I loved how Michonne gave his eye a real close-up with a shard of glass. Good times.

The assault on the Governor’s little combine was way more action packed than I expected. Smoke bombs, assault rifles and total chaos. Not to mention Rick spacing out and seeing the he-died-last-season Shane, which leads to some guy killing Oscar, the prisoner in Rick’s group. Nice going, Sheriff.

Carl’s grown up real fast without his mom, and he seems real used to his dad never being around. They do a great job of showing how he’s still a scared little boy, yet he’s got one helluva quick trigger finger.

Andrea has quickly shot up to the  top of my “Is she dead yet” chart. She is beyond annoying. Wasn’t she the super tough broad who ripped into Rick, Dale, and everyone else for saving her life and hiding her guns? She thrives on being an aggressive leader type. Yet once she met the Governor, she’s gone soft. When the town is under attack, the Governor basically tells her to to go hang out in the kitchen barefoot and pregnant. She protests slightly and then hangs her head and lets him go. She learns how messed up the Governor is and still stays with him. WTF, Andrea?!? The dude has decapitated zombie heads floating in a friggin fish tank! I was praying Michonne would’ve lopped her head off, but no such luck.

I’ve always found Merle super annoying and cliched. But the ending where the Governor tosses the one-handed redneck under the bus and makes him the scapegoat took me by surprise and actually made me feel bad for the guy. Then they bring out his brother Daryl and things just got 100 times cooler. Can’t wait to see these two “good ol’ boys” fight their way outta this mess.

There’s loads more coolness, but last night’s episode literally had my heart racing the entire time. Creepy prisoners. New blood in the prison. And you just know the Governor’s on his way to storm the prison!