Apparently, I have a little bit of daredevil in me. Call it a midlife crisis perhaps, but I stepped out of my comfort zone not once, but twice this past weekend during our short vacation to Lake George, NY.

Once again, we planned a getaway with my wife’s cousins. This time around, we also brought along one of our nephews too. So for those keeping score at home, that’s four adults and five teenage boys.

Due to schedules, we could only visit Lake George for a few days. But we more than made up for the shortened stay with some serious action.

The first thing we did when we got there was head over to Adirondack Eagle Flyer to go ziplining! While pricey for the amount of time you are actually zipping (it’s maybe a 1-2 minute ride at $50 a shot), we had $5 off coupons and since we were a group of eight, they gave us an additional discount.

Regardless, it was totally worth every penny to do at least once.

The ride takes you in an old army vehicle where you sit side by side with your fellow victims, facing the rest of the crew in your party. It’s about a 10-minute dusty ride through the woods to the top of the mountain. If you get dizzy or car sick at all, I highly recommend sitting in the front. Not the back, like I did…

Once at the top, you’re fitted with a harness and strapped to the zip line. You’re in a mostly reclining position so it actually felt like a mini hammock. Pretty comfortable to be honest.

When everyone’s ready, you put your feet up on a gate directly in front of you. The countdown begins and the gate vanishes, forcing you to begin your descent.

I’ve never done a zip line before, except for a very small one that was over a lake and not very high up. So I won’t even count that. For my first zip line experience, this was pretty beyond extreme for me.

The Eagle Flyer shoots you down a nearly 1,000-foot vertical drop at almost 50 mph and then smoothly levels out for a longer glide above the trees. The whole thing is roughly three-quarters of a mile long and you’re about 125 feet above the ground.

The only one in our group not to join in was my wife’s cousin Ira, but I’m honestly impressed he was even able to watch all of us without passing out.

As someone who’s totally not into roller coasters at all, I was surprised how calm I was even before we began. When I put my feet up on that gate, yes, I was having some serious second thoughts. But then it opened, my heart raced and before I knew it, I was soaring above the trees like an eagle, with a spectacular view of Lake George to my right.

It was truly breathtaking, to say the least, and I would absolutely do it again. I guess the only thing I wish is that it was twice as long so I could soar even longer.

It was certainly a great and exhilirating way to start our Lake George vacation! But that was only the beginning…

So I’d never really gone down a zip line before but that wasn’t the only wild thing we did on this trip. The next morning, we got up early and headed over to the nearby town of Hadley to go white water river rafting with the Sacandaga Outdoor Center.

I cannot say enough good things about the entire crew from Sacandaga Outdoor Center. From the moment we arrived to the moment we left, they were incredibly helpful, friendly and made sure we had a great time. And we most certainly did.

I didn’t really know what to expect but now that I’ve done it, I’m dying to go white water river rafting again. What immediately put me at ease was the fact that we had our own guide (Shoutout to Trey!) in the raft with us. Four of us sat on the sides of the raft to help row, while Trey sat in the back doing the real heavy work.

There were a lot of times Trey told us to just relax and sit back while he steered and rowed from the back. The water was moving pretty fast to begin with so we really didn’t need too much rowing on our part. The first rapid really took me by surprise and we spun around as we crossed through the waves.

About halfway through, we slowed down a bit as the water really calmed down. Other rafts caught up to us and we had a crazy water fight using the water cannons and buckets we all had. That lasted about 10 minutes or so, after which we all just jumped out of the raft and had a “free swim” for a good 15 minutes. That was one of my favorite parts actually.

The water was so calm and we were surrounded by gorgeous trees and a beautiful blue sky. With a life jacket on, it was super easy to just lay back and float. I could’ve easily spent an hour or two just soaking it all in. 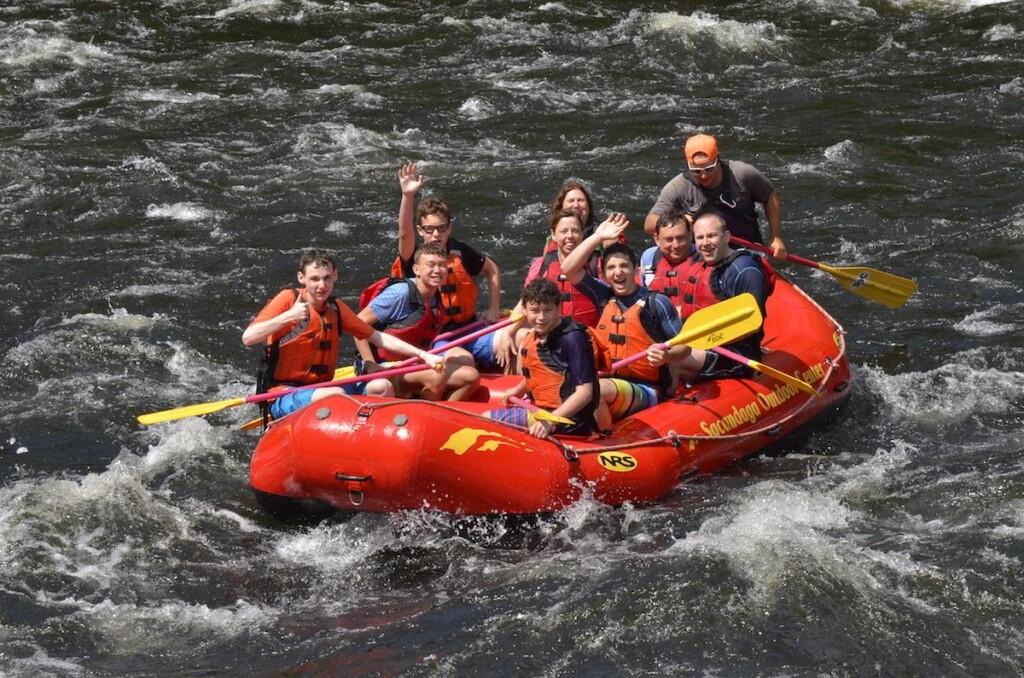 Unfortunately, we had to get back in the raft (that was an interesting exercise!) and continue on our way. We rode downstream through a few more rapids, including the final choppy section known as “The Dragon’s Back.”

Did I get soaked? You better believe it. Was the water cold? Only at first. Did everybody have a blast? 1000 percent!

Super big thanks to Trey and the entire crew at the Sacandaga Outdoor Center. I highly recommend signing up with them if you’re looking for a great adventure with your friends and family.

LAKE GEORGE IS ACTUALLY A LAKE

So what else did we do on our vacation to Lake George? Well, we ate. A lot. 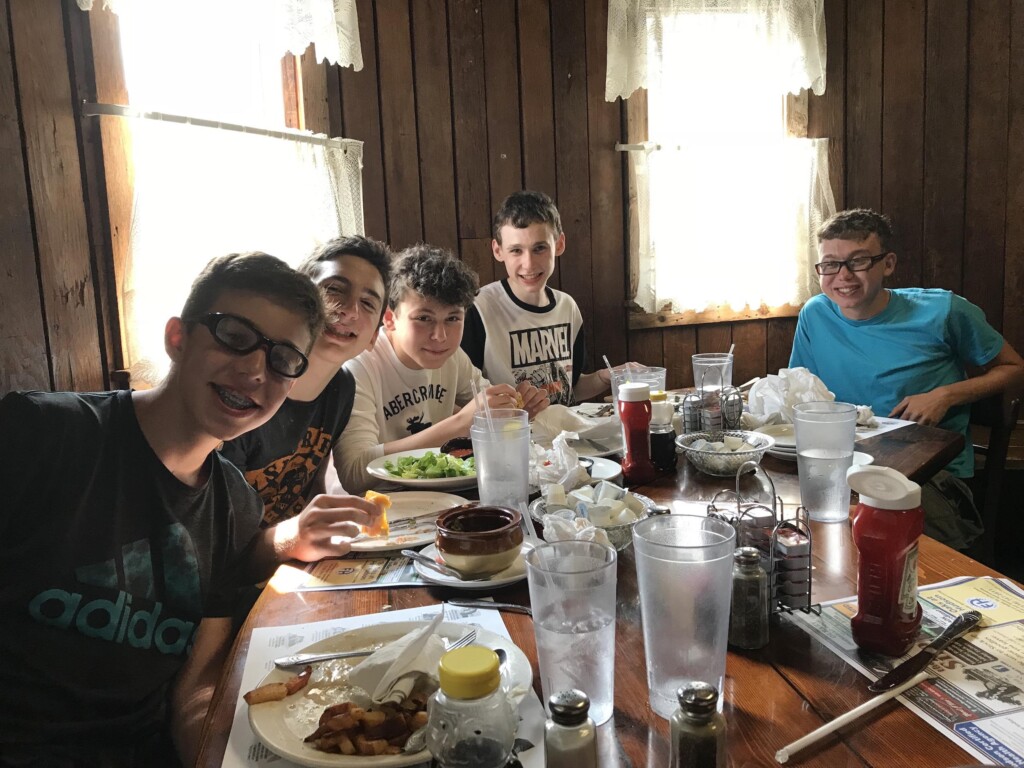 One of our favorite meals during the trip was at a restaurant called The Silo. It’s like a mom and pop version of Cracker Barrel, only with loads better food and a cuter country store. The creamy tomato soup was heavenly. The service was also top notch and you better believe we’ll be stopping by there again.

And we also visited the lake itself. Lake George is pretty spectacular with all the green behind it and the large river boats slowly moving across. 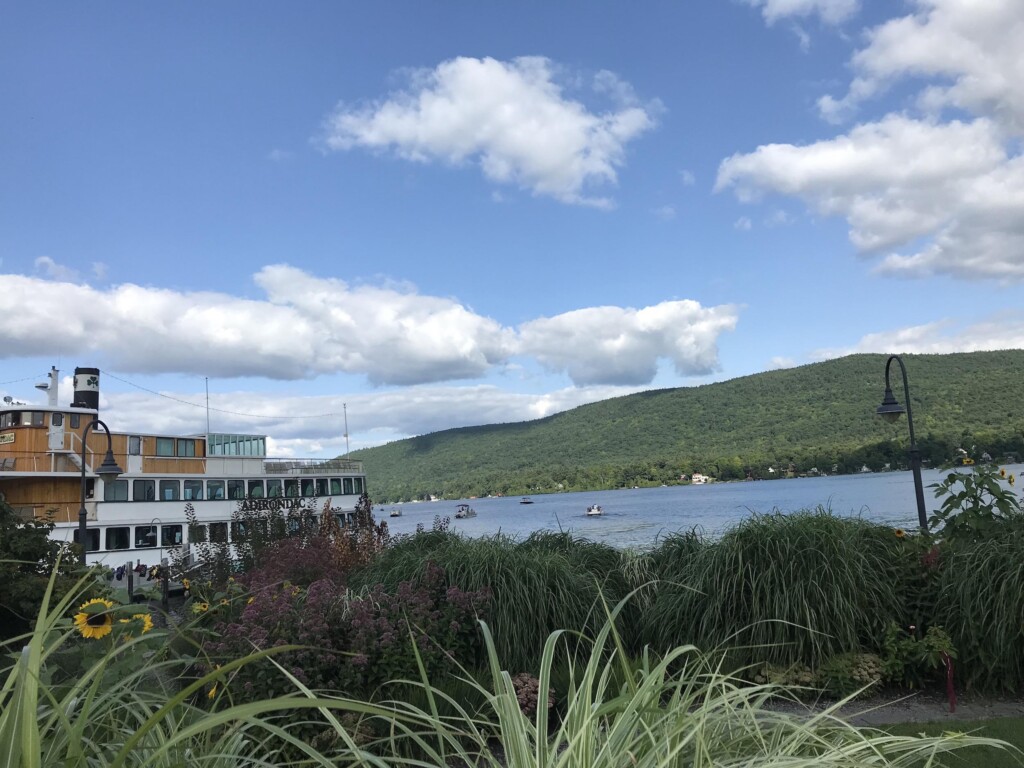 We didn’t take a ride on a river boat this time, but I’m hoping we can enjoy one on our next visit. 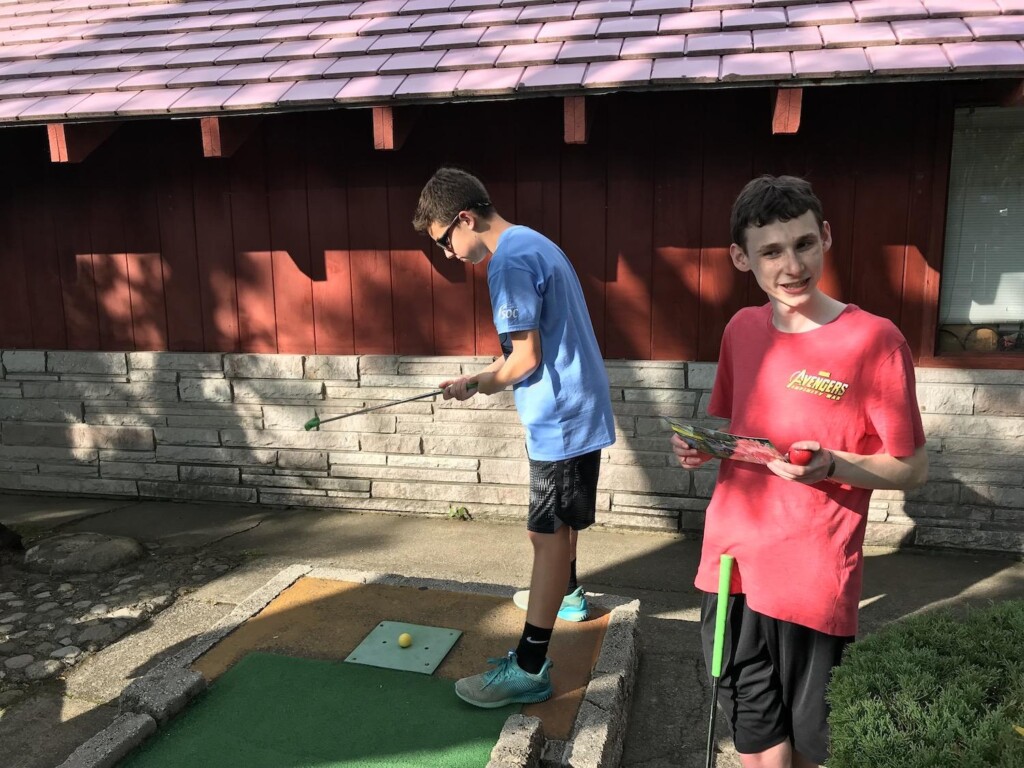 Of course, it wouldn’t be Lake George without some mini golf fun! 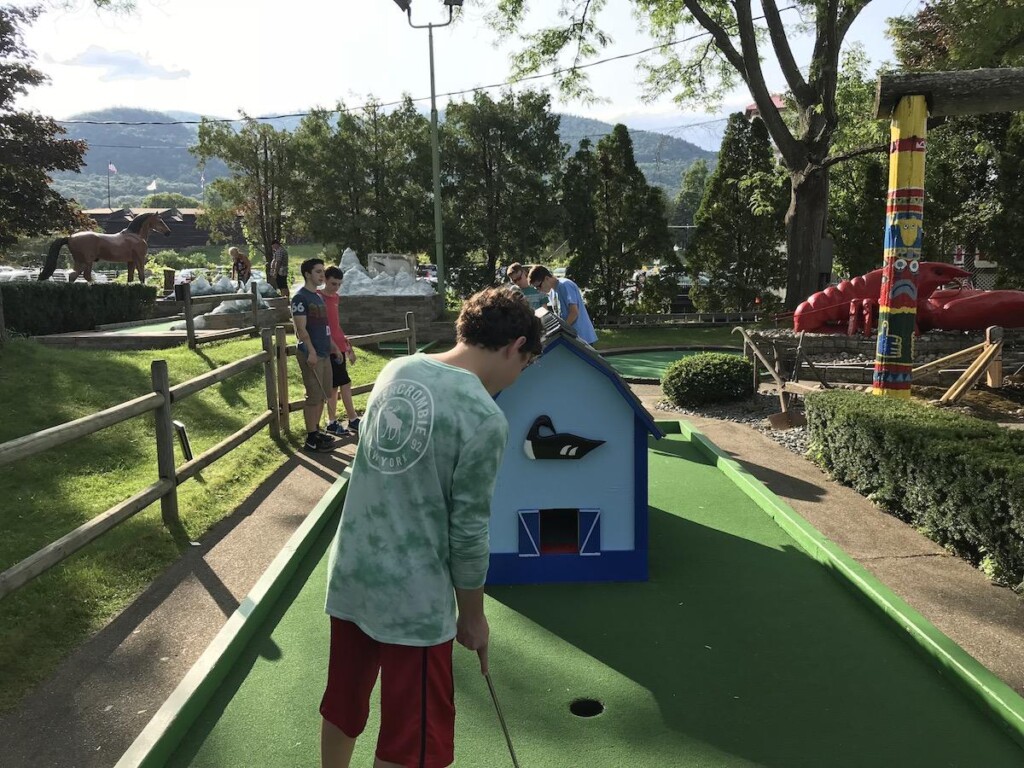 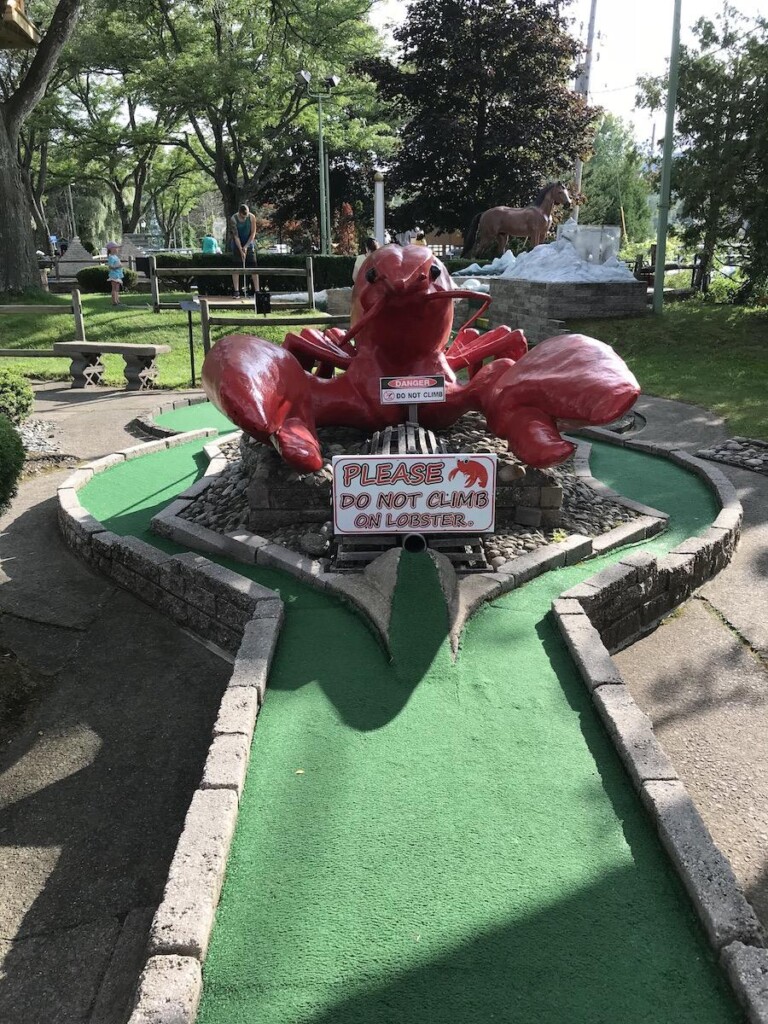 Surprisingly, the boys obeyed the rules and didn’t climb up on Larry the Lobster. At least, I didn’t notice. Of course, I may have been off resting my eyes somewhere at the time… 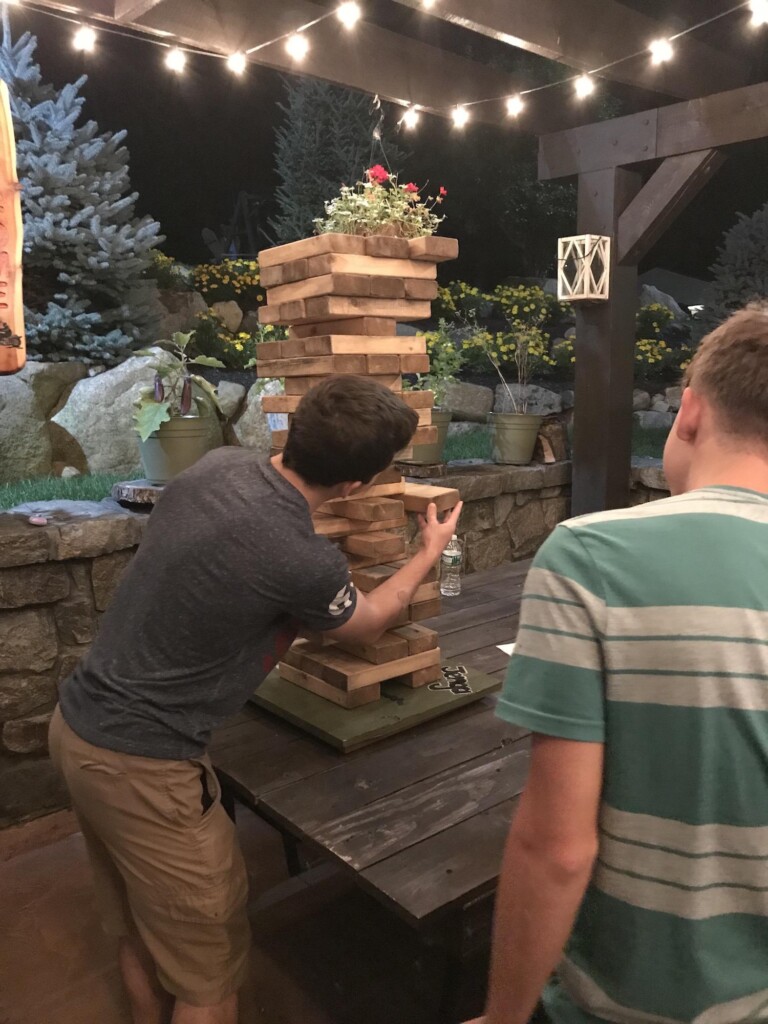 Our hotel had some fun outdoor activities too. Besides a fire pit, there were oversized versions of Connect 4 and Jenga. 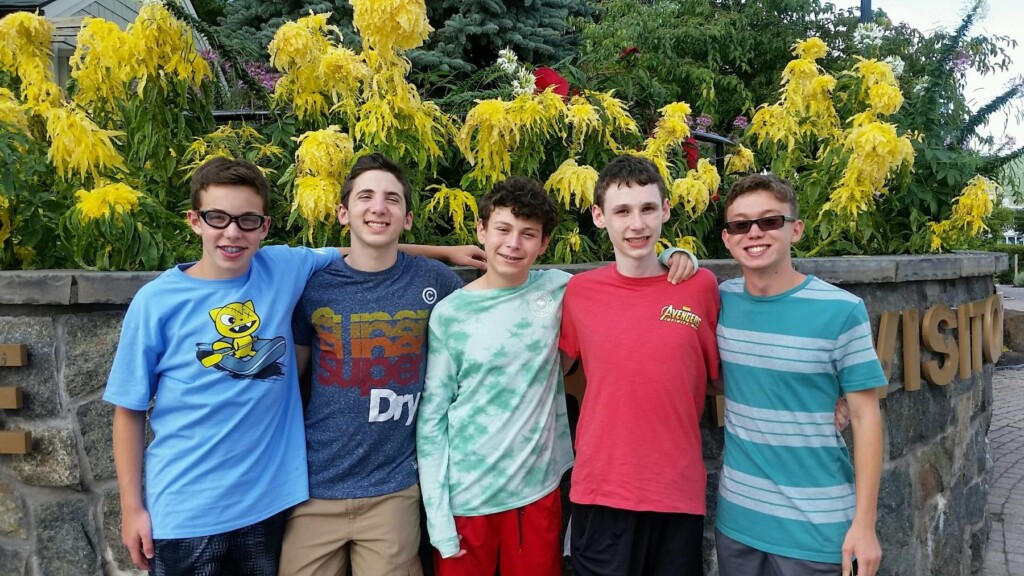 And those are the highlights of our mini vacation to Lake George. Apparently I visited when I was a kid myself (my parents verified that), though I have very little recollection. This time around, I do remember Lake George and we certainly need to head back for more.

We need more time to do even more fun things such as hiking, cave exploring, more ziplining and even rail biking! Before winter blusters in, I encourage you to take a trip to upstate New York for some amazing outdoor adventures.

Have you visited Lake George?