Interviewing Kermit and Miss Piggy was the highlight of my journalism career. As a hardcore Muppets fan, I have loved watching Fozzie Bear, Gonzo, Animal, Beaker and the Swedish Chef get things started.

Now, I also loved Sesame Street as a kid. The Count was always a favorite (though I fully admit, I had a hand puppet of him as a kid that scared me to death) and there is no greater superhero than Super Grover.

Recently, however, I heard of a gang war brewing. A throw-down to end all throw-downs.

The Muppets had entered Sesame Street and it was time to take out the trash.

Kaci Marie posted what seemed a harmless little Twitter poll. Oh, but if only she had a clue as to the fury she would unleash in the process:

Who wins in a street fight?

I’d like to first call foul, and demand a recount. There is just no way that in a street fight, the Muppets would lose to the childish cast of Sesame Street. Despite what James Gunn believes (“Snuffleupagus is a natural born killer”), I just don’t see it.

After arguing with my friend (potentially ex-friend now) Dave about the match-up, I decided to blog about it. After all, this would be one epic battle for the ages. Let me break it down for you.

The rundown: Cookie Monster’s a big fav of mine. And on the surface, you think he’d end this one quickly, after all, “Monster” is his middle name. Or last name. But while Cookie Monster of old could devour thousands of delicious cookies in a single session, of late, he’s gone soft. He’s now eating… vegetables. And other healthy foods. Sure, they may make him healthier but he’s lost that focus. That Eye of the Tiger. Animal, on the other hand, will eat… well, anything. Cookies? Sure. Vegetables? Probably. Drum set? You bet. He also grew to ginormous proportions in The Muppet Movie, so his body is no stranger to being pushed to its limit.

The knockout: Animal is as lanky as can be, while Cookie Monster’s a big brute with a sweet tooth. Ferocity and endurance win out in this one as Animal would watch Cookie Monster stuff his face with cookies and then while in a cookie coma, Animal would launch into a full-on frenzy to knock the stuffing out of Cookie Monster.

The winner: Animal (The Muppet Show) 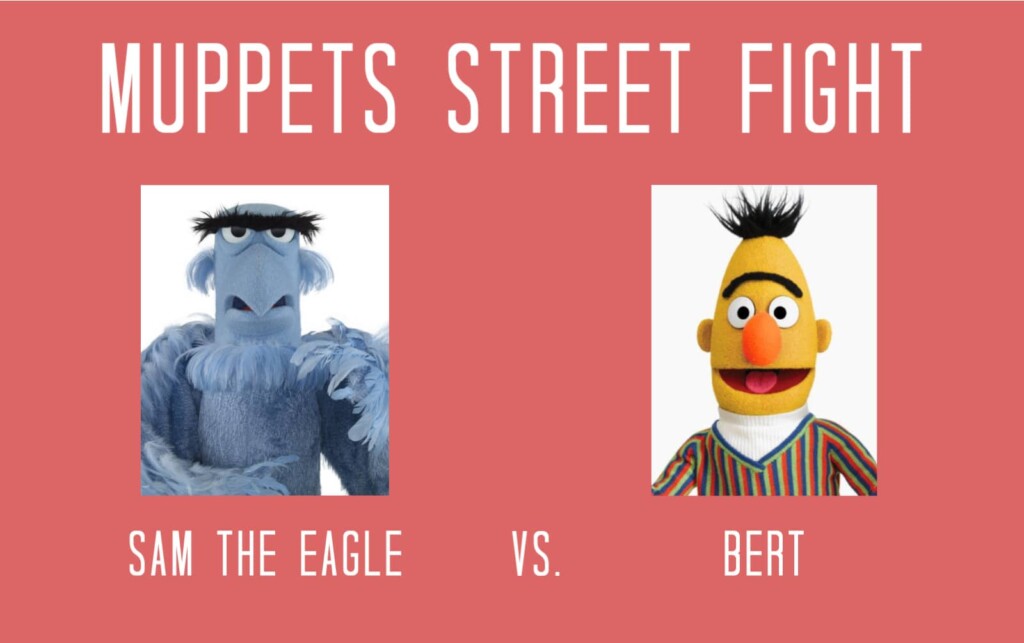 Sam the Eagle vs. Bert

The rundown: Two of the most boring characters around, mainly because they’re so serious, would end up having a lengthy political debate about the ethics of using knives in a street fight and the legalities of the whole thing.

The knockout: While both are used to dealing with insane costars, Bert clearly puts up with more abuse from Ernie than Sam does with the entire Muppet crew combined. In the end, Bert’s eyebrows would wear Sam down, and Sam’d fly off in a huff. 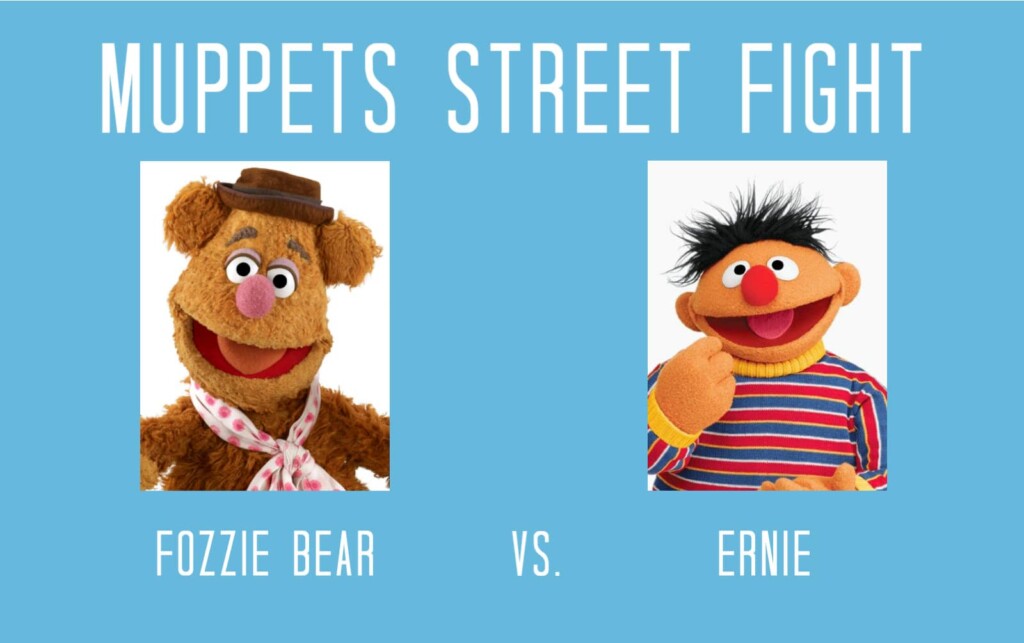 The rundown: Fozzie is just the most lovable Muppet around and with his bad-as-the-worst-dad-jokes arsenal of comedy, I can never get enough of him. Ernie, on the hand, has a serious mean streak in him relying more on practical jokes. This would be one groan after another with these two.

The knockout: Fozzie, being a bear, would put up a tough fight until he would make the mistake of joking about Rubber Duckie. That’s when the beast within would burst out of Ernie, unleashing a torrid of verbal jabs that would send Fozzie Bear into a fetal position in the corner of the room, crying his eyes out. 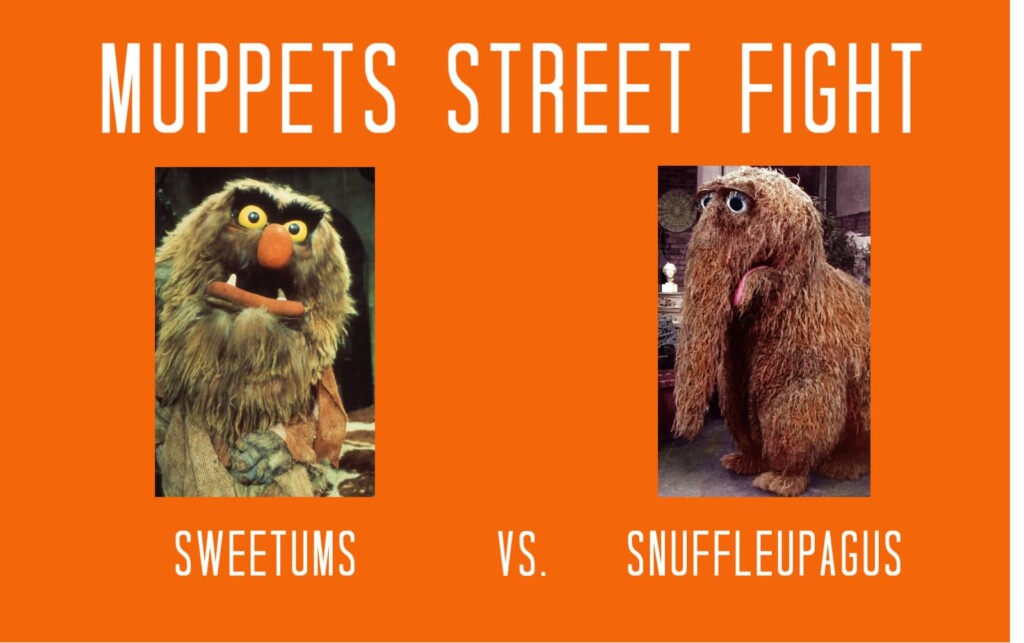 The rundown: Sweetums is one of the biggest Muppets around. He’s a brute with a heart of gold who just wants to hang out with everybody. Snuffleupagus, on the other hand, is basically a baby Woolly Mammoth who’s scared of his own shadow. The dude was so frightened, he was literally invisible to everyone except Big Bird for decades..

The knockout: Now that Snuffy is visible to everyone, it wouldn’t take long for Sweetums to walk up and push the big guy over. With a flower in his snout, Snuffy would merely snivel and proceed to take a nap.

The winner: Sweetums (The Muppet Show) 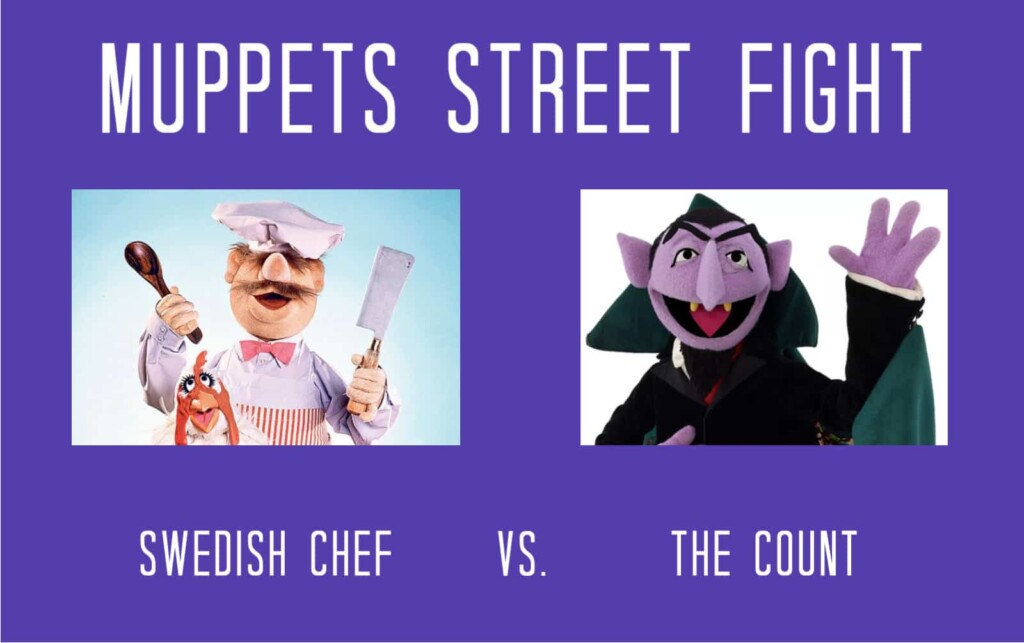 Swedish Chef vs. The Count

The rundown: One of my Top 3 favorite Muppets, the Swedish Chef is absolutely no stranger to weaponry. Whether it’s regular kitchen knives, battle axes or even flame throwers, he’s held his own against just about every delicious animal and vegetable there is. The Count? Sure, vampires are inherently scary but even those twinkly, glittery ones from Twilight would laugh at The Count’s vampireness.

The knockout: The Swedish Chef would sing and dance around while lopping off body parts from the Count. Not one to put up a fight, the Count would merely enjoy the fight, counting off each and every limb as it were hacked away. Ultimately, the Swedish Chef would grab a wooden mallet and stake, and bork bork The Count right through his cold felt heart. 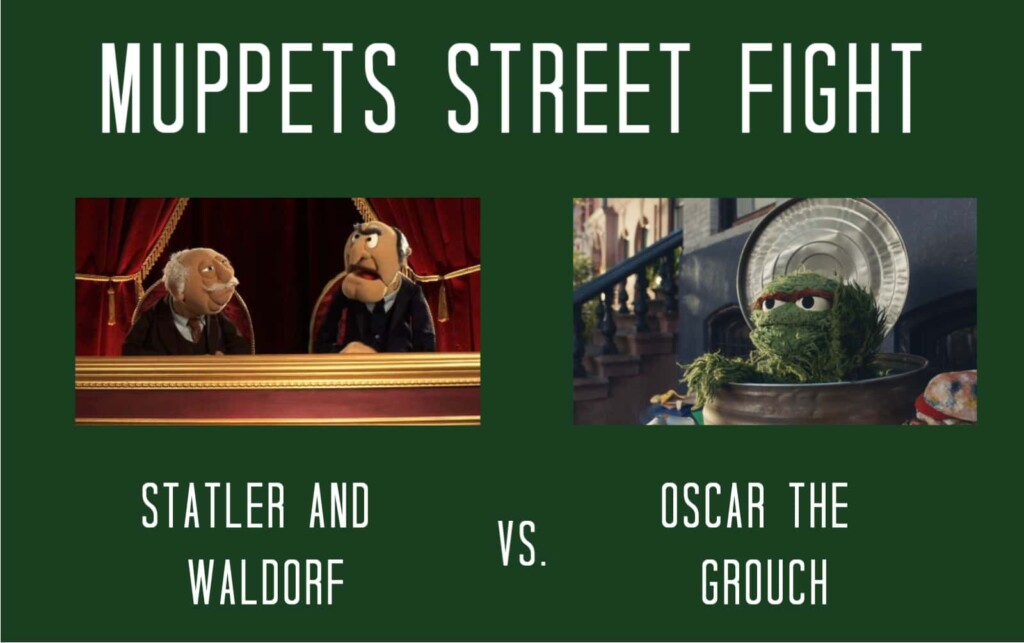 Statler and Waldorf vs. Oscar the Grouch

The rundown: Talk about your grumpy old men! Statler and Waldorf have made a career out of heckling. They’ve also proven that despite the awful shows they’ve somehow sat through, their hearts can take just about anything. Oscar the Grouch may never leave his stinky garbage can but he can be as vile and vengeful as the geriatric duo for sure.

The knockout: Non-stop zingers versus relentless grouchy insults. It’d be one hate-filled verbal assault between these two sides. In the end, though, Oscar would simply spout a final insult, then duck down and hide inside his garbage can. Statler and Waldorf would attempt to push his can over, only to find it way too exhausting. They’d drop to the floor and pass out, with Oscar not even aware he’d just secured victory in this muppets street fight. 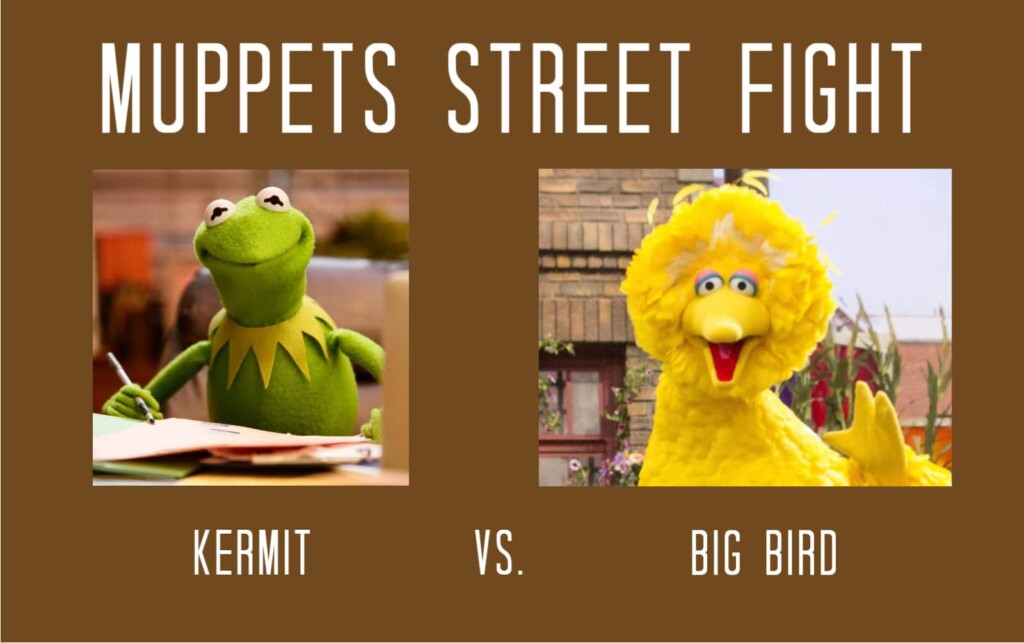 The rundown: The two spokesmen happen to also be quite possibly the two most normal, sensical muppets of the bunch. While vastly different in size, they’d initially try to talk their differences out.

The knockout: Not one to just give in, Kermit would know when it was time to really get his hands dirty. After talking for hours, he’d start hopping around to disorient the Bird. Then while Big Bird was getting a bit woozy from spinning around so much, Kermit would run through his legs, causing Big Bird to tip over and knock himself out. The bigger they are, the harder they fall indeed.

The winner: Kermit (The Muppet Show) 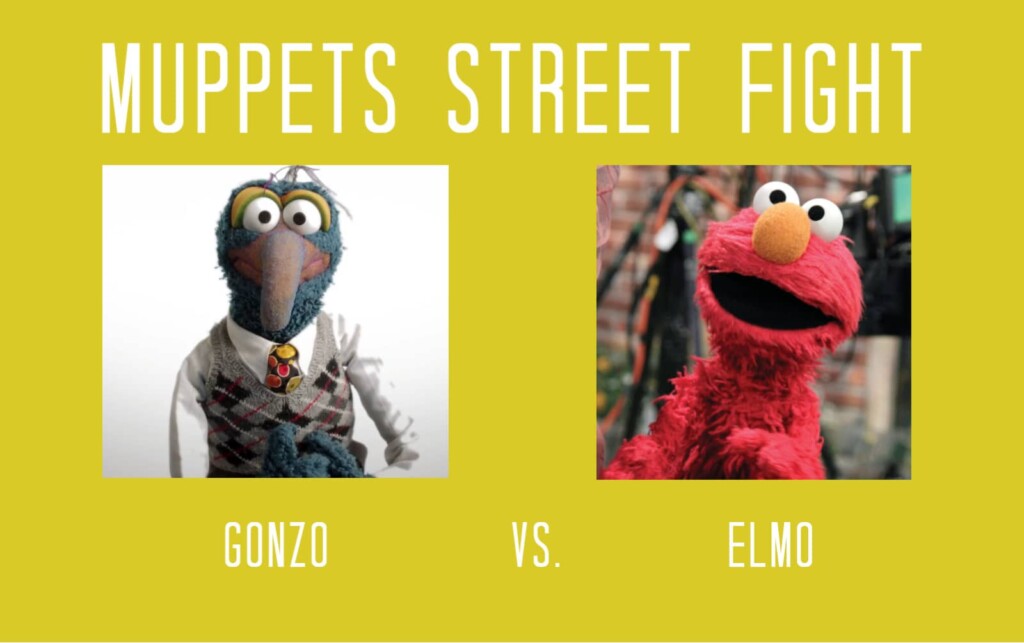 The rundown: Fearless is the one word that comes to mind when I think of Gonzo. Moronic is probably the other, as this chicken-loving muppet is quite the odd character. Still, I’ve always loved the goofball. Elmo, however, I have never liked. As a big fan of Grover, Elmo seemed a cheap knockoff. Both characters are rambunctious and full of way too much energy. I’d expect a volatile, bouncy, frenetic fight between these two.

The knockout: Being shot out of a cannon is pretty much a habit for Gonzo these days, so he’d be pulling out all the stops to take down the fast-talking, always moving Elmo. Unfortunately for Gonzo, Elmo’s just a bit smarter and even has a mischievous streak in him. No doubt, Gonzo would challenge Elmo to a ludicrous daredevil contest and somehow Elmo would rig it to see Gonzo the Great quickly go down in flames. 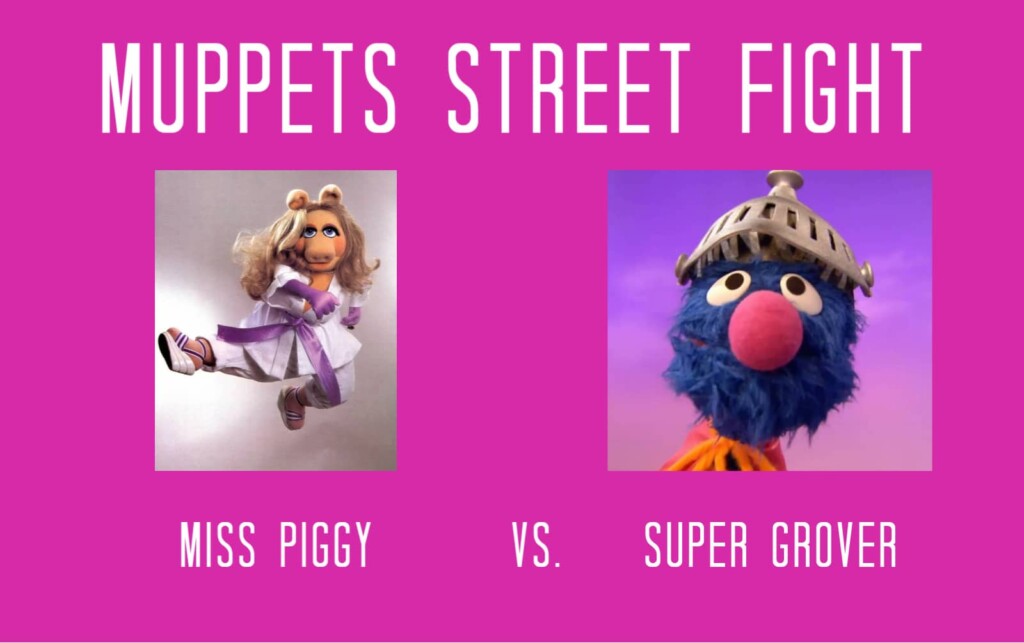 The rundown: One’s a diva with a short temper and a kung-fu grip. The other’s a bonafide superhero who can’t even fly straight. Miss Piggy has zero patience for anything and would surely dive right in to battle against Super Grover, who’d be doing his best to spread joy and love, while avoiding roundhouse kicks.

The knockout: After a loud cheer of, “Suuuuuuuper Groooooover,” the flying muppet would zoom in towards Miss Piggy at full force. Ready to side-step him, Miss Piggy wouldn’t even have to duck, as Super Grover would vastly overshoot his mark, smash into a building and knock himself out before the fight even started. Miss Piggy, annoyed that she didn’t get to actually punch anything, would walk over to Super Grover and give him a few kicks for good measure. 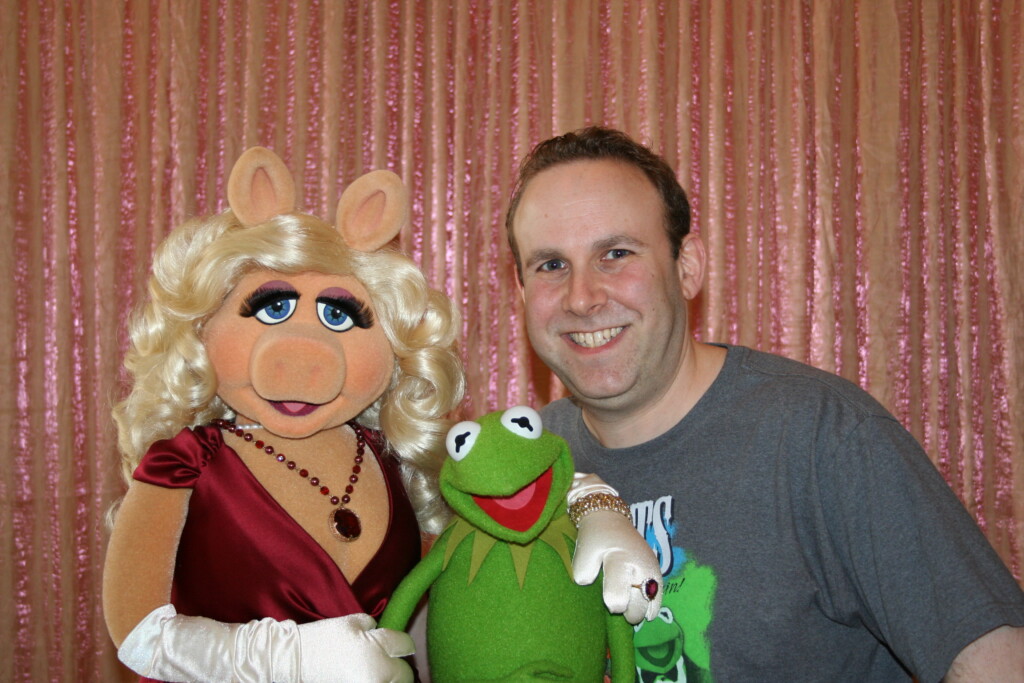 Yes, mayhem would certainly be the word of the day when all of these muppets met for a street fight. With a score of 5 to 4, though, The Muppet Show cast would squeak out a victory over the educational cast of characters from Sesame Street. And that’s not even counting some of The Muppet Show’s secret weapons like the mad bomber Crazy Harry or the scientific genius Dr. Bunsen Honeydew.

Today’s fight has been brought to you by the letters T-K-O.

Who do you think would win a Muppets Street Fight?