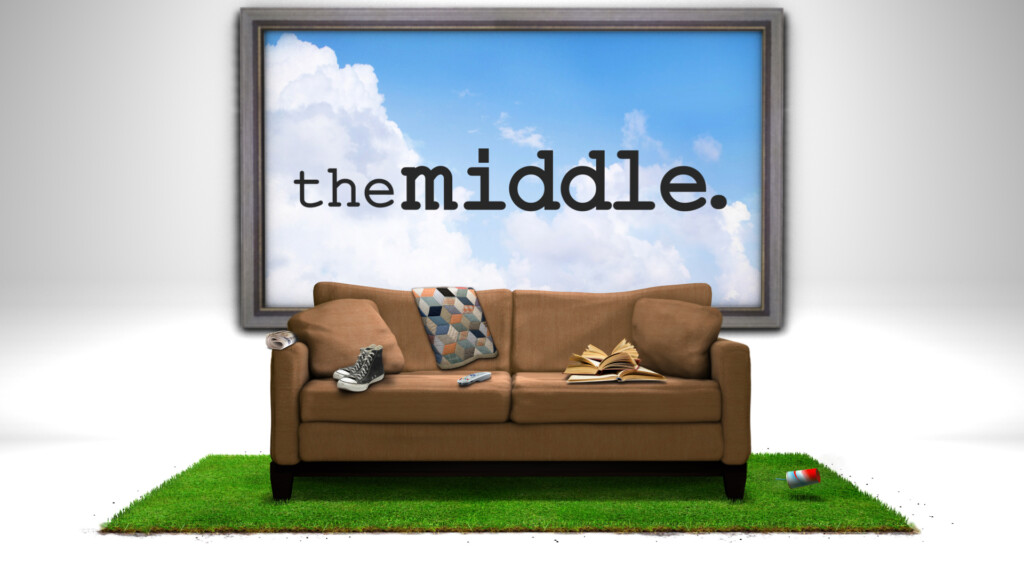 The Brady Bunch they’re not. On the other hand, they’re slightly less dysfunctional than The Simpsons, so they’ve got that going for them. I’m talking about The Heck Family, stars of ABC’s “The Middle.”

Starring Patricia Heaton and Neil Flynn as parents Frankie and Mike Heck living in Orson, Indiana, this modern-family sitcom is a humorous slice of life as these two try to successfully raise their three kids (Axl, Sue and Brick) without killing any of them in the process. Airing Wednesday nights on ABC at 8/7c p.m., The Middle is clearly enjoying its fifth season on the air.

While The Hecks make up the core family of the show, there’s one extra member that gets overlooked quite often. Their house. It may not have a voice, but that familiar (and quite messy) home is just as much a part of The Middle as is all the teenage angst.

On a recent West Coast trip, I suddenly found myself in the middle of a fantastic set visit. Yep, myself and roughly 25 other bloggers crashed the Warner Bros. Studios Ranch to preview tonight’s “The Walk” episode, chat with Executive Producers Eileen Heisler and DeAnn Heline about the show, and ultimately get a private tour of a very special house.

“The Walk” episode sees Frankie and Mike quickly learn that they’re more interesting when they’re with other people. It’s a great, hit-the-nail-on-the-head observation that any couple who’s been together for 10 years or more can easily relate. While Axl helps his younger brother Brick with one of the most unique book reports you’ll ever see, Sue has her hands full as she goes from zero prom dates to way too many, through no fault but her own.

Eileen and DeAnn admitted that many of the show’s characters were based on various family members. And the crazy antics the Heck family constantly finds themselves elbow deep in? Yep, many of them are all based on things that have really happened to some members of the crew. In fact, the weirder the situation on the show, the more likely it’s actually based on a real event!

While the show creators didn’t have any truly horrific prom nightmares of their own to share, they did offer some teases about the Heck Family’s future. Specifically, a very special upcoming road trip to… yep, Disney World! That is going to be one long, painful car ride…

After the Q&A session with Eileen and DeAnn, the whole blogging group headed over to 427 Birchwood Avenue. Though don’t go looking for that on any map, we just walked around the corner from our screening room on the lot. Unlike other sets, where each room is just blocked off in a giant warehouse in an odd, unconnected way, the Heck House is indeed a house! Sure, it’s plopped right in the center of a big warehouse, but each room connects and after a few seconds walking around, you quickly forget you’re actually on a set.

Set decorator Julie Fanton gave us a great tour of the house, as well as filling us in on some neat behind-the-scenes tidbits.

“The set is really a character in The Middle,” said Fanton. “Frankie’s life is out of control, and we like to show that by showing it in our set in the house. And you see that it’s out of control. She can’t keep up at all. And so I think you can see that when you watch the show. A lot of shows, you don’t see mess and in our show, you do. It’s not pretty.”

Our first stop was the living room. “It’s not literally as disgusting as it looks in here,” revealed Fanton. “The hand prints on the wall are paint and the carpet has been aged and painted.”

I loved the minor details all around the house, like these family photos on the wall!

Right off the living room, is the eating area next to the kitchen, chock full of… well, junk. Curious where all these props come from? “I like to shop at Target. I like to shop at Kohls. And I got a good bit of stuff at the Salvation Army for this set,” revealed Fanton.

Want to talk micromanagement? “Our producer Eileen insists that our mail have the actual address on it,” said Fanton. “She’s very detail oriented. She’ll call me on it too if something’s not right.”

I so need to get me one of these trophies.

Right back behind the kitchen was the laundry/computer room. Yowza. Talk about your work hazards!

This is where “the magic happens.”

In the middle of our tour, some familiar folks stormed in wondering just who the heck (pun intended) was in their house. 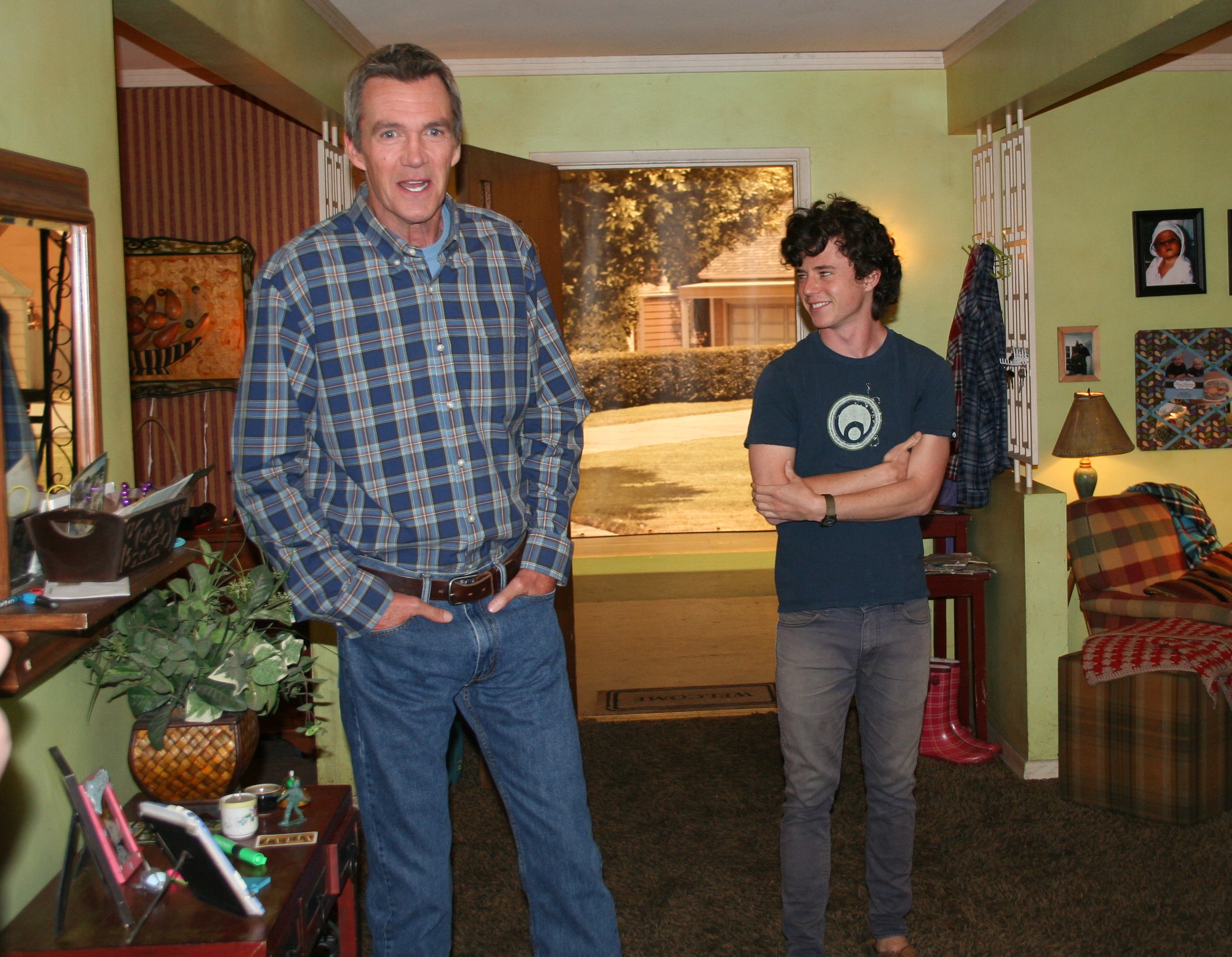 Neil Flynn (Mike Heck) and Charlie McDermott (Axl Heck) hung around long enough to chat with our group and even take a few photos. They couldn’t have been two more low-key guys. Neil is only slightly more talkative than the characters he plays on TV but man is he tall! And Charlie was a real soft-spoken, and just generally nice kid. 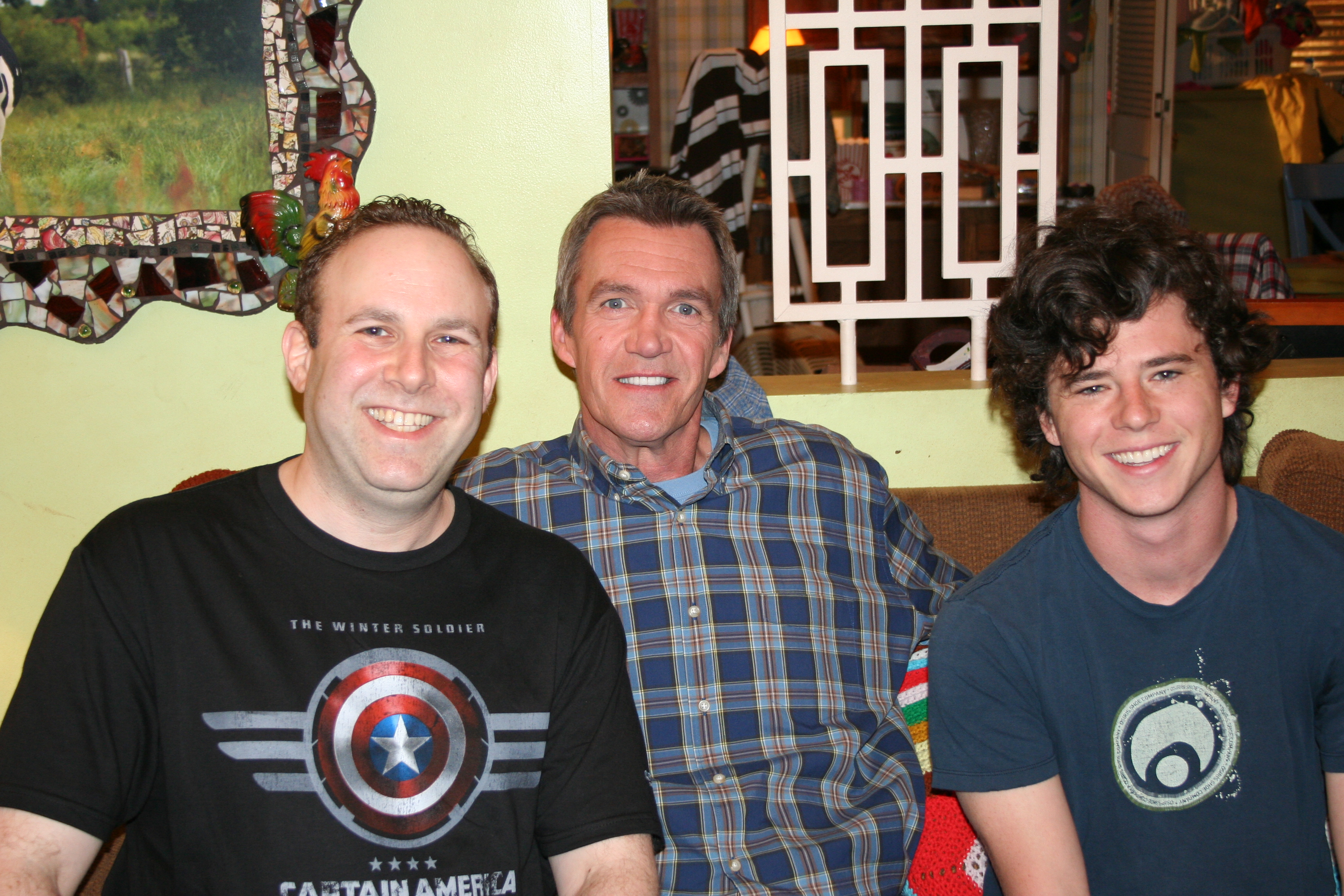 They were even patient enough to squeeze in with all of us bloggers for one mega living room shot! 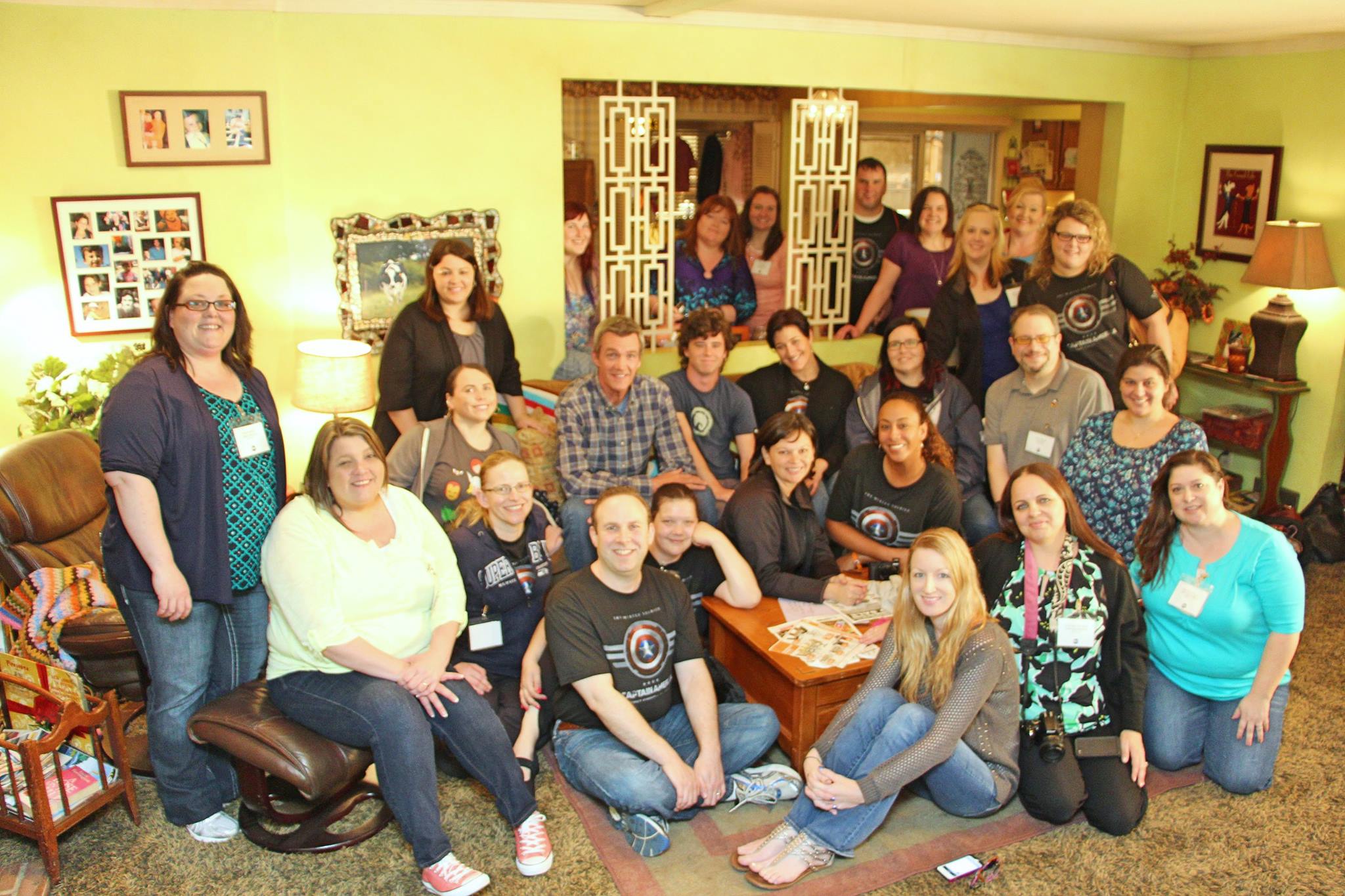 While talking to Neil and Charlie, who should walk in but Jack McBrayer! He plays Dr. Ted Goodwin on the show but I know him as Fix It Felix from Wreck-It Ralph, as well as Kenneth the Page from 30 Rock. He literally just stumbled in to see what all the fuss was. He smiled, laughed, said a few quick words and bolted out of there! You just never know who’s gonna show up at your house, right?

I wasn’t fast enough to snap a photo, but thankfully my new blog buddy Melanie took a shot and was kind enough to share!

Here he is a bit more in character for the show…

On to the rest of the house. I headed down the long hallway towards the bedrooms. 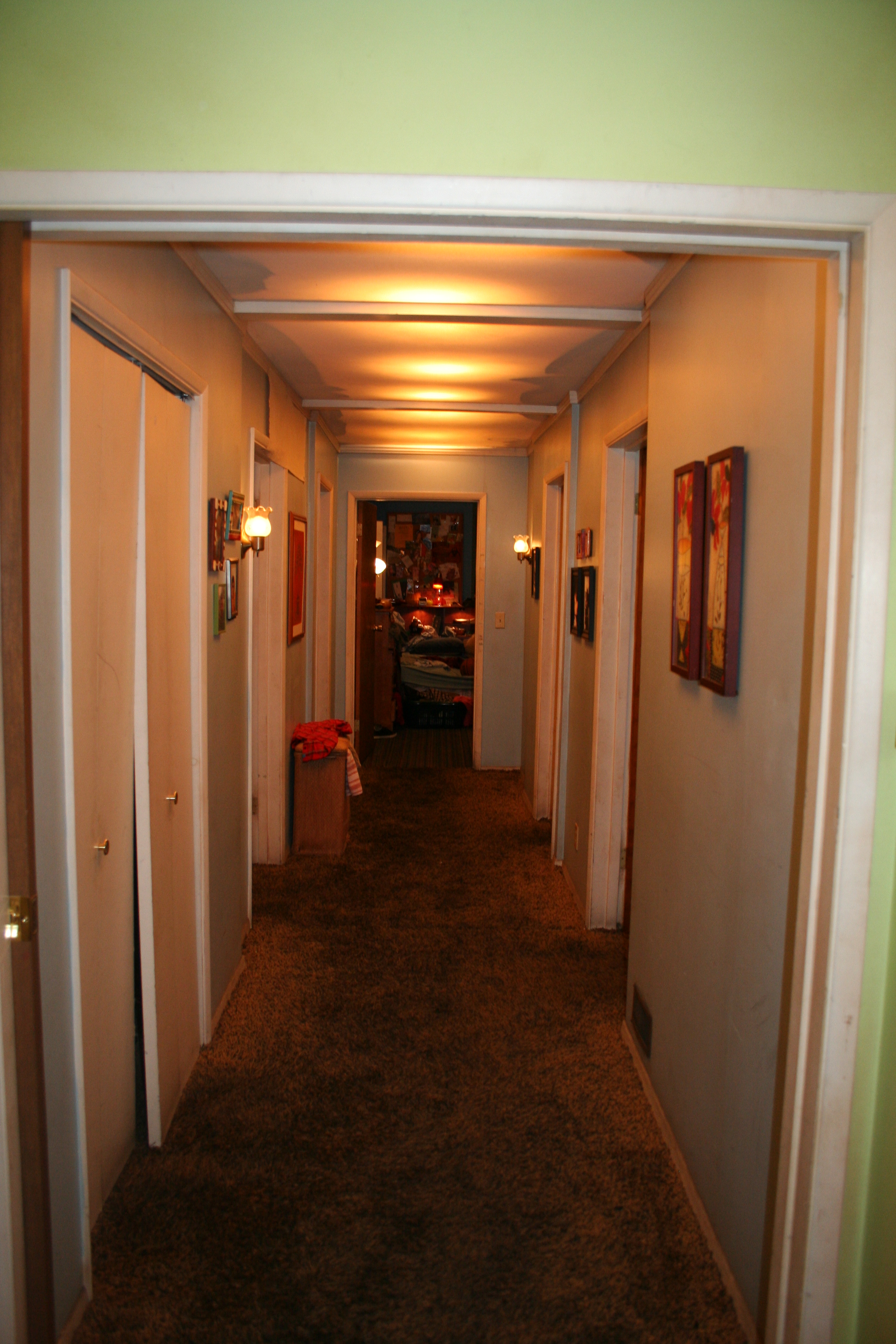 I was ready to check out the bathroom, but saw the note on the door and thought twice about it.

What does a teenage sitcom girl’s bedroom look like? Pretty much what you’d expect.

I seriously need one of these posters for my office!

On to mom and dad’s room we go.

If you’ve got yourselves some boys at home, you know that neatness is generally not a necessity. That most definitely applies here for Axl and Brick’s room.

When I finished checking out the bedrooms, I heard a familiar voice up front. Upon returning to the living room, there was Atticus Shaffer, little Brick Heck himself!

He was as friendly as he was polite. We chatted about video games (He just got an Xbox One and loves it), as well as The Walking Dead. Yeah, I’d fit right in no problem with the Heck household!

It was really a blast walking through a house that people across the country tune into every single week. And meeting the cast in their own home away from home was pretty darn surreal too. I really couldn’t think of a better place to be stuck than, yeah, in The Middle.

Be sure to catch The Middle on Wednesday Nights at 8/7c on ABC! 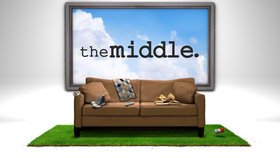 Catch up on previous episodes with DVD Box Sets! 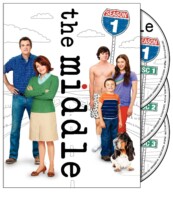