Alan Moore and Dave Gibbons’ Watchmen is one of my favorite comic book series of all times. This 12-issue mini-series from DC Comics is just an amazingly realistic look at a world with legitimate superheroes. At the time, it was a real departure from the more lighthearted comic books coming out. I devoured the series and wanted any merchandise I could find for it.

Sadly, there wasn’t much beyond a few scant Watchmen T-shirts, a smiley face watch, a portfolio of prints and a metal miniatures collection. Oh, and of course, you could buy a bloody smiley face pin. But I wanted Watchmen action figures! In the back of one of the issues, you even see a set of them on Ozymandias’ desk!

Little did I know that I only had to wait a few decades to get my wish.

Sure, there’s since been a movie, prequel and sequel comics, and an amazing HBO Watchmen series that’s as good as the original comic. There were also a set of movie-based action figures, some mini-mates and even some nice collectible figures from DC Direct at some point. But for some reason I just kind of let those go by me. I didn’t like the look of the movie figures really, and the comic ones were nice but just okay to me.

Then for some bizarre reason, over the past few months, I got the Watchmen bug again. I suddenly wanted anything and everything to do with the original comic series. Thanks to eBay, I discovered a line of Watchmen action figures from Matty Collector, a collector’s subscription service from Mattel.

And I was smitten.

Apparently in 2013, collectors could subscribe to the Club Black Freighter membership, and get their grubby hands on six Watchmen action figures for roughly $25 a pop: Comedian, Silk Spectre II, Dr. Manhattan, Nite Owl, Ozymandias and Rorschach.

Yeah, I’m going to talk about the packaging of these figures first. Because the details are unreal. 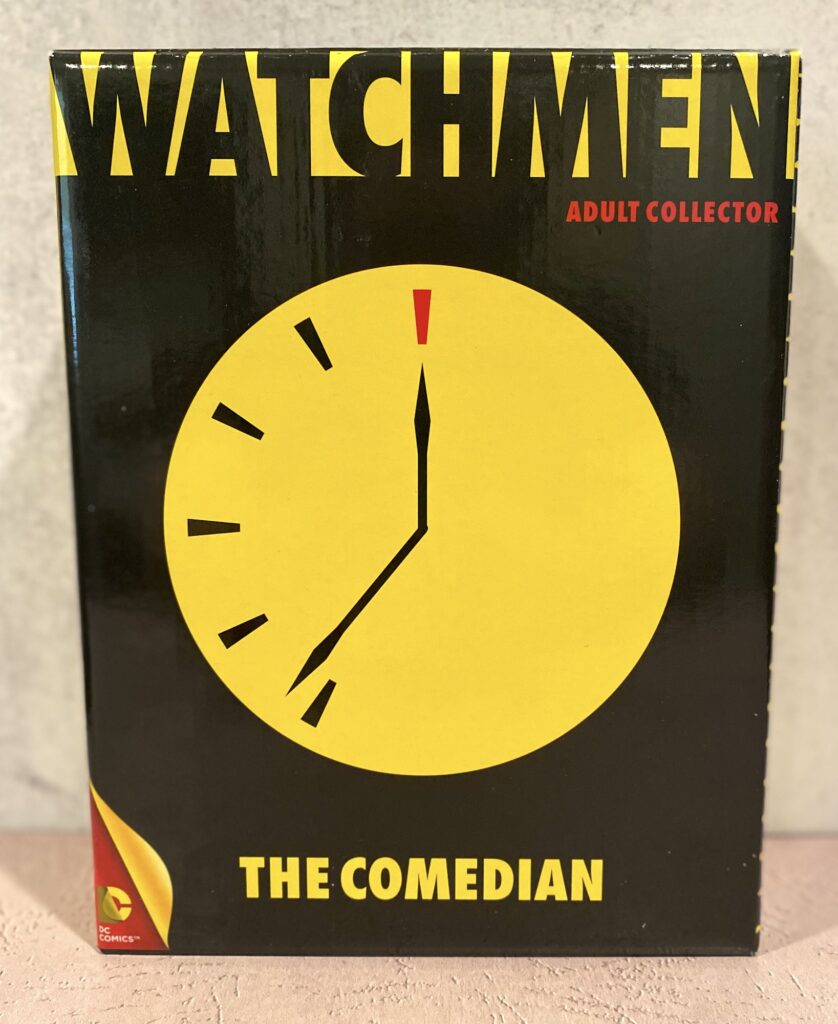 There are two parts to each figure. Let’s start with the regular old box it comes in. Looks pretty standard right. Nothing too crazy.

Until you realize that each of the six boxes has a different time on the clock. 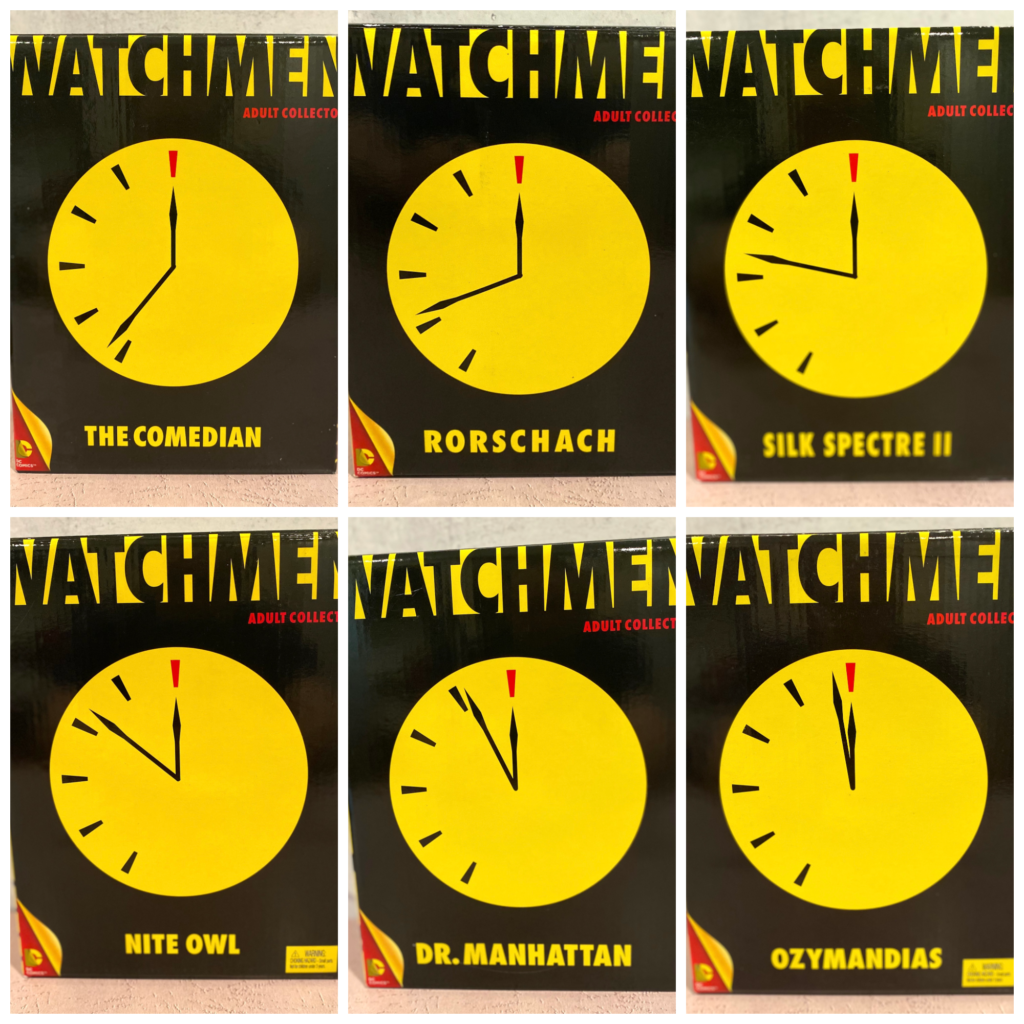 I know it’s a small thing but when I realized that, it was just too cool not to share. 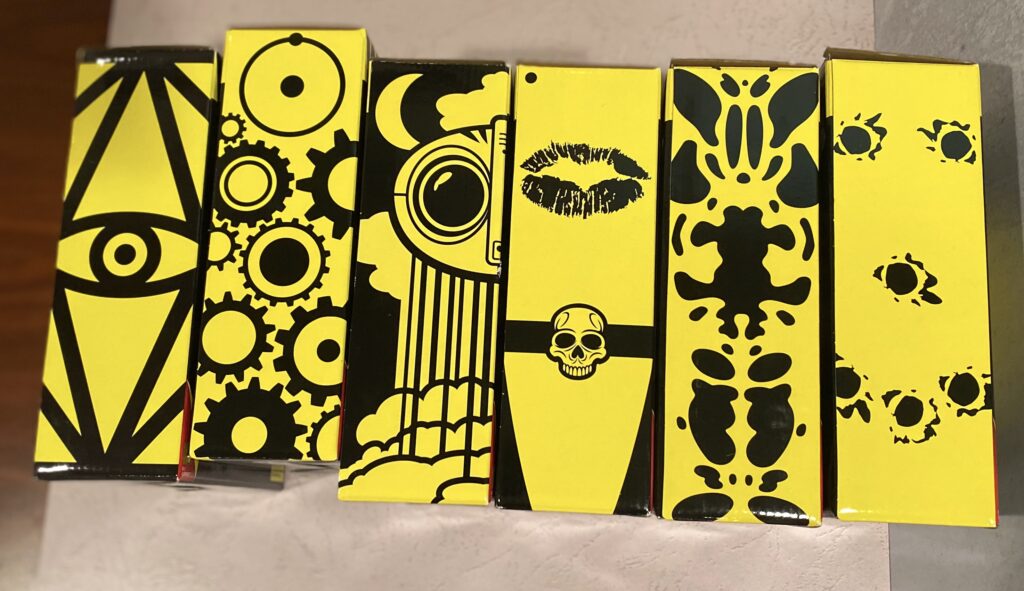 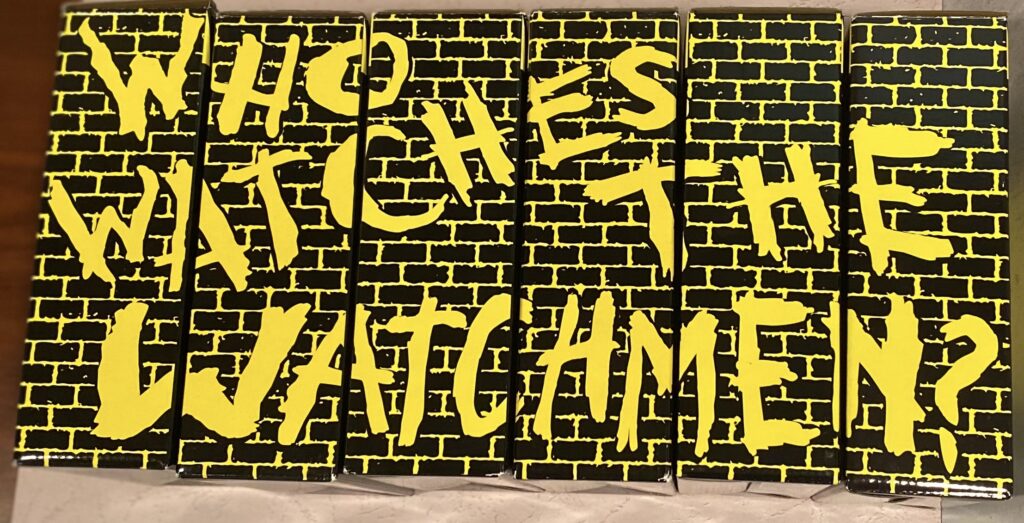 Yep, when you line up all six boxes next to each other, they recreate the infamous brick wall with “Who Watches the Watchmen?” spray painted on it. So yeah, now I can’t even throw out the outer box the figures came in. 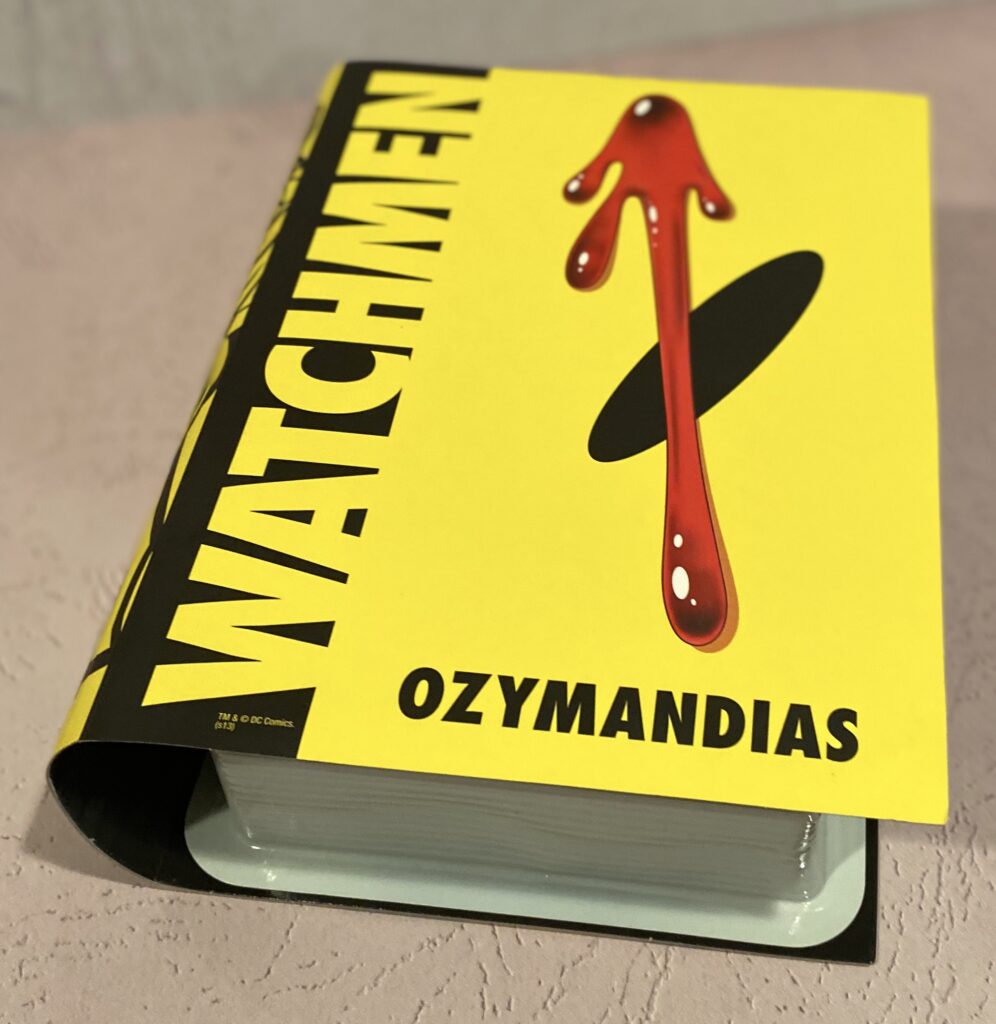 Inside each box is a clamshell case for each figure. The front has the very familiar comic book look. That bloody (ketchupy?) smiley face on the cover along with the logo makes this look just like the familiar Watchmen trade paperback I’ve read to death. 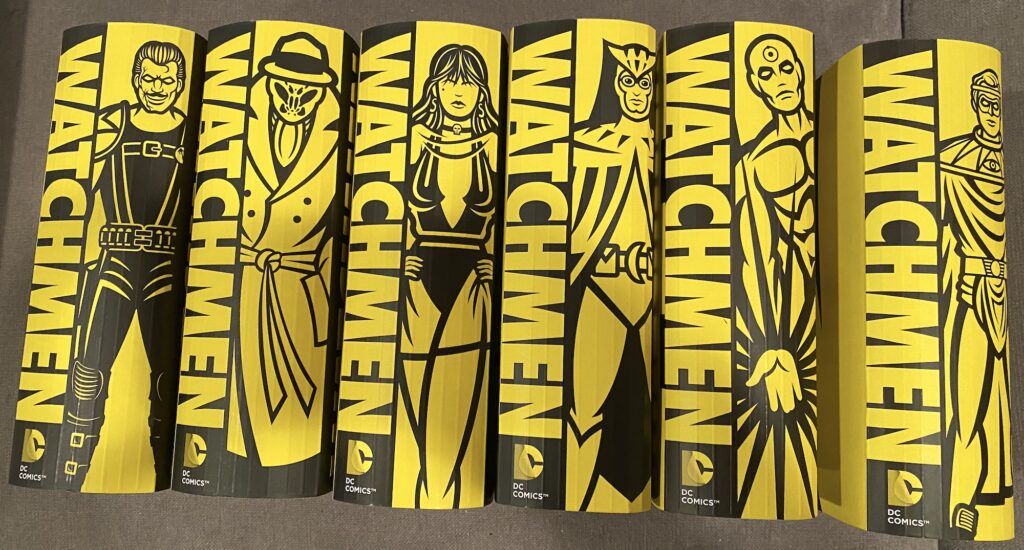 The spines of each case show off an illustration of each character along with the Watchmen logo. The backs of each case, however, feature a letter or two from the logo. And just like the outer boxes, when you line them all up…

…the backs form the Watchmen logo.

But what about inside? 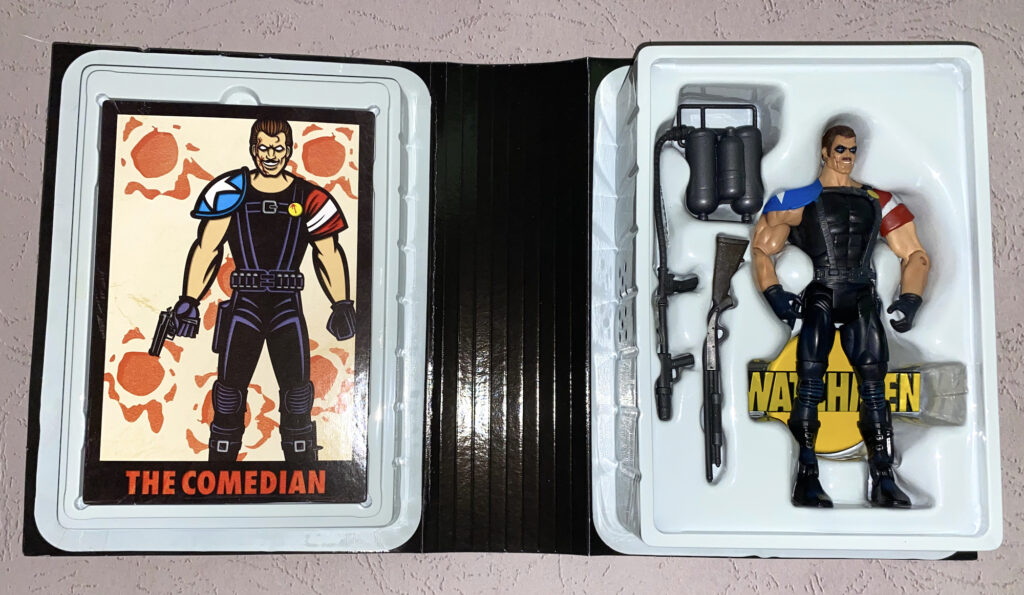 When you open the clamshell, each figure has a character card on the left (short bio on the back), and the figure placed in molded plastic on the right. There aren’t many accessories overall, but most come with something besides a pretty cool Watchmen-logo base to stand them on. 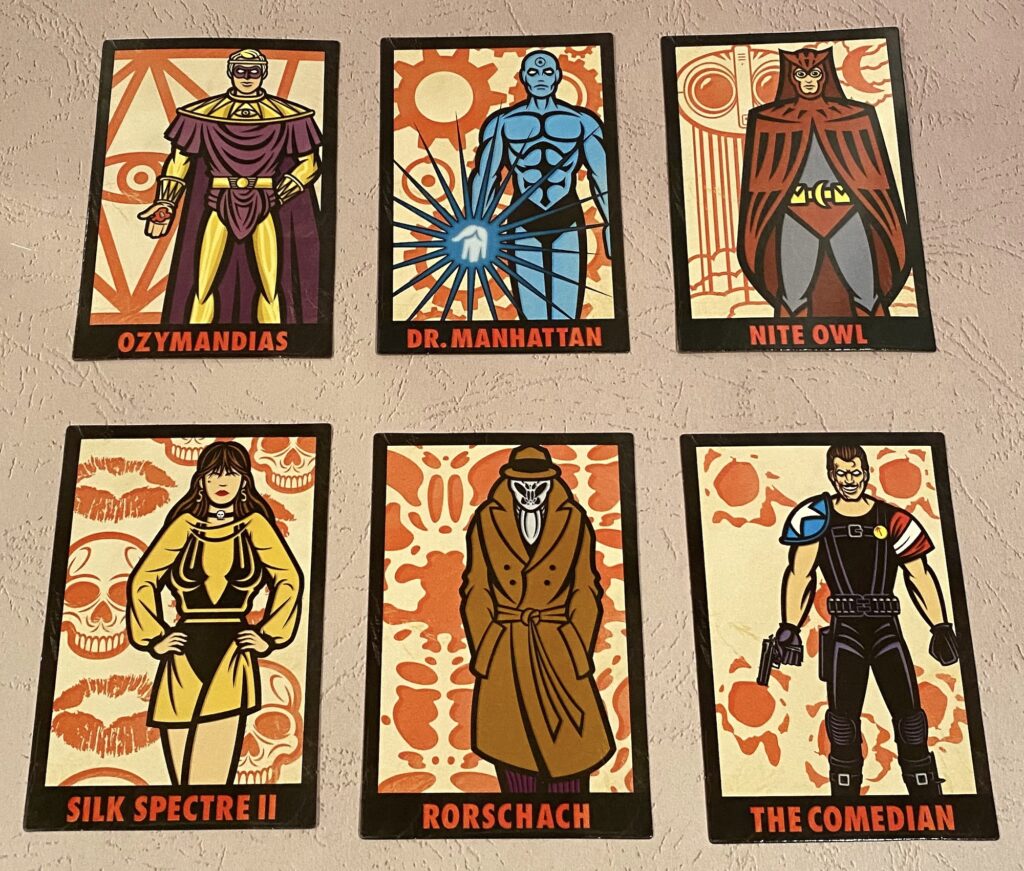 The figures themselves are average in terms of articulation. But the sculpting is what drove me down the eBay rabbit hole to collect all six of them. Just look at them! I swear they leapt off the comic book pages. 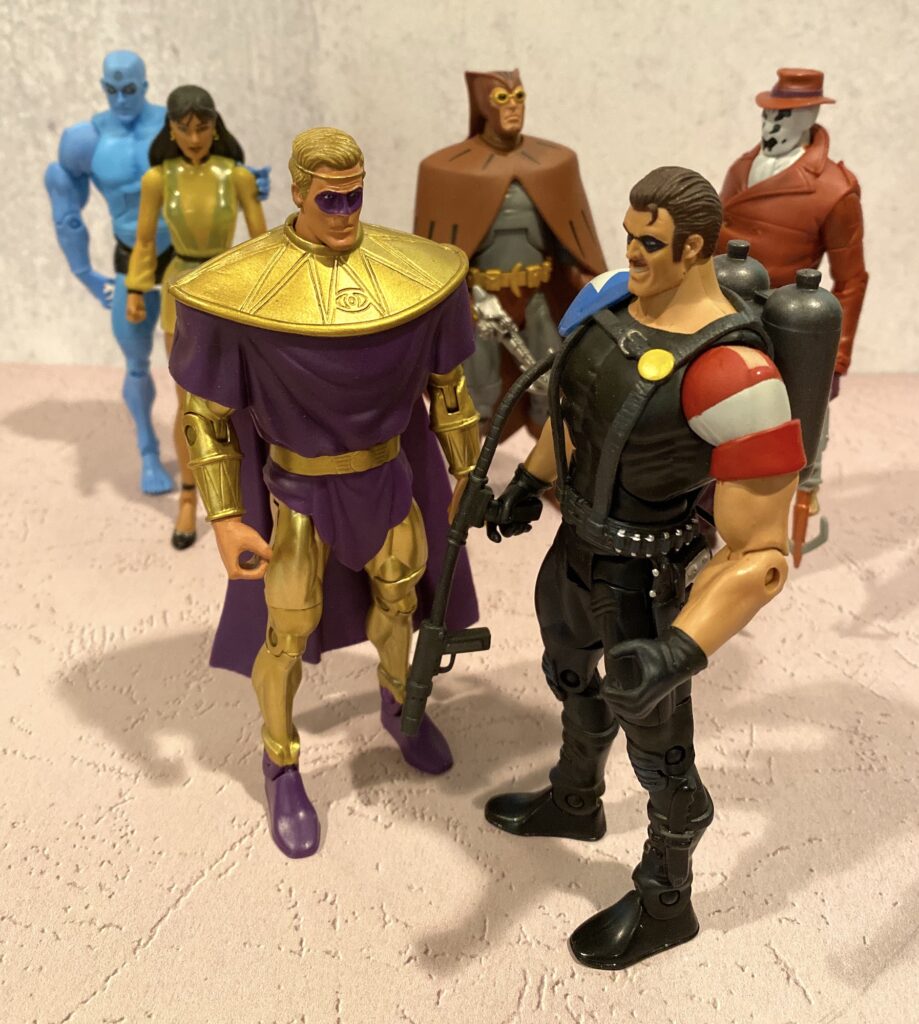 The colors. The sculpting. The outfits. They all are crazy impressive to me. All that’s missing is a little Bubastis figure to skulk around Ozzy. 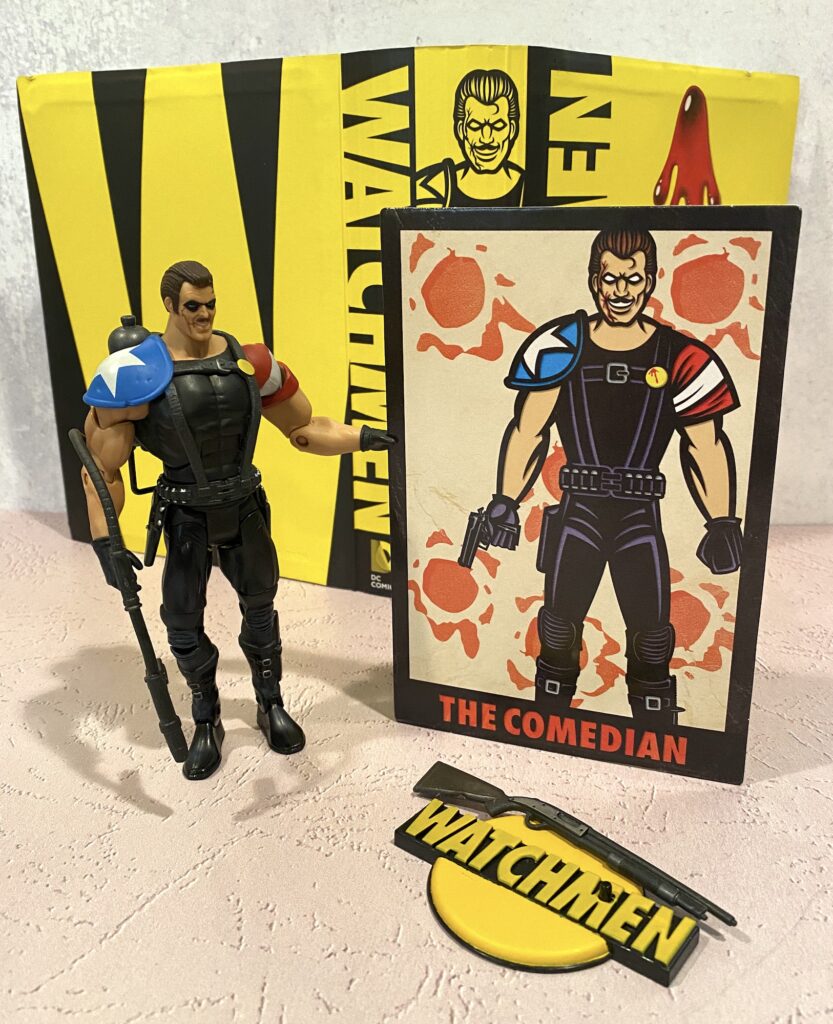 The Comedian shows just how poseable these Watchmen figures truly are. 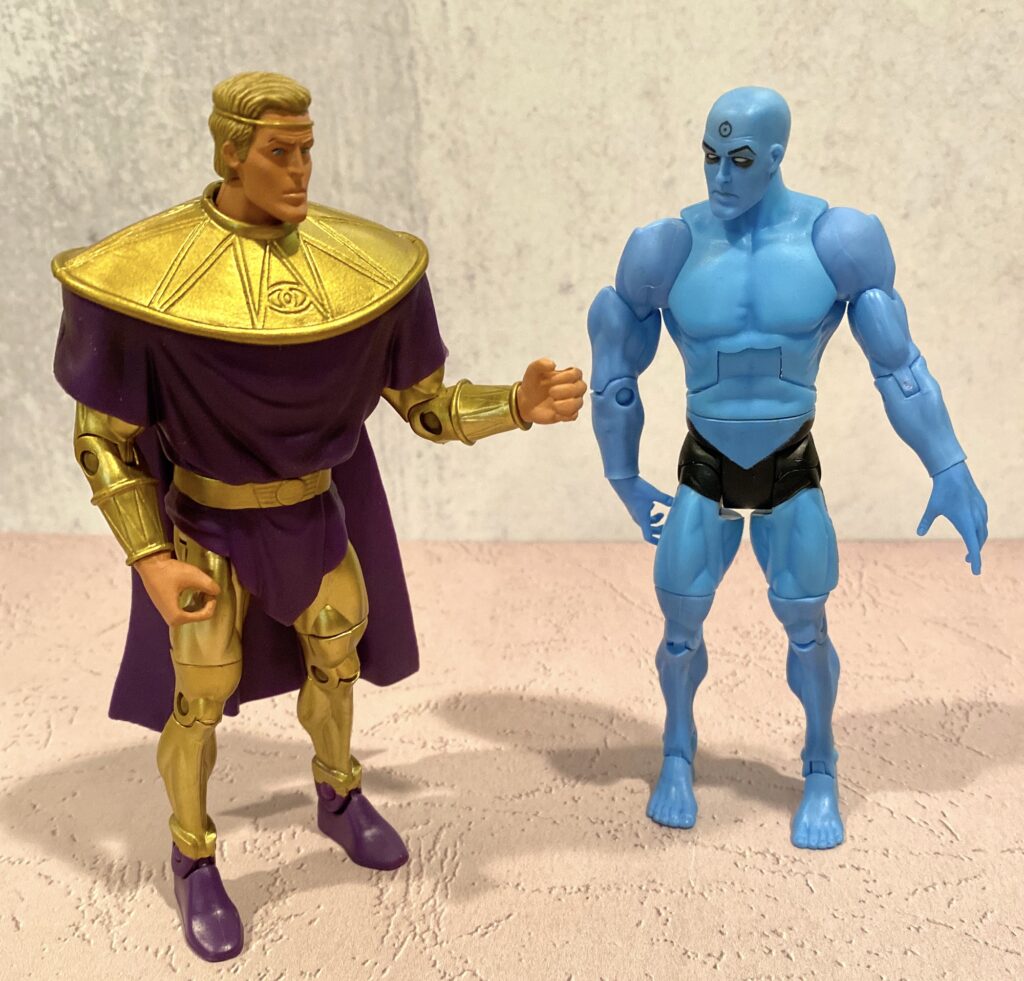 Even Ozymandias’ Watchmen figure oozes superiority. He clearly thinks he’s the smartest toy in the world. 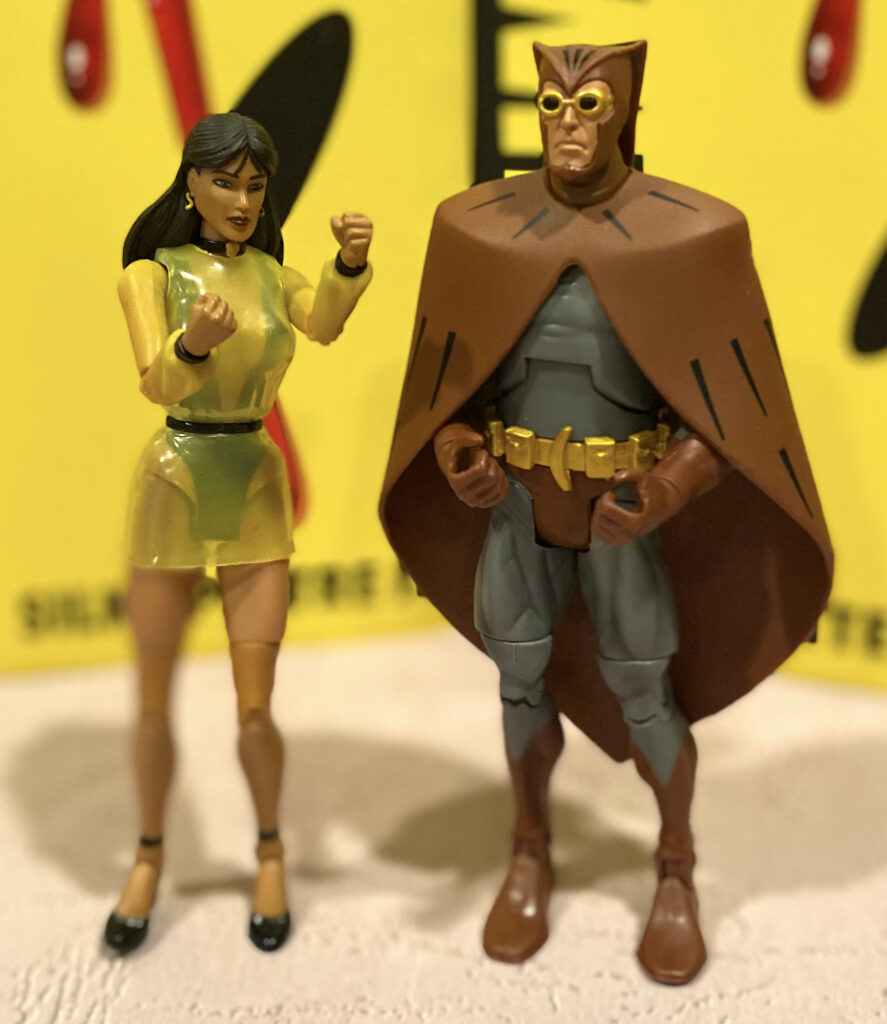 When Silk Spectre joins Nite Owl, I’m brought right into the scene where the two of them are walking home from dinner and find themselves in an alley, ready to let the fists fly. 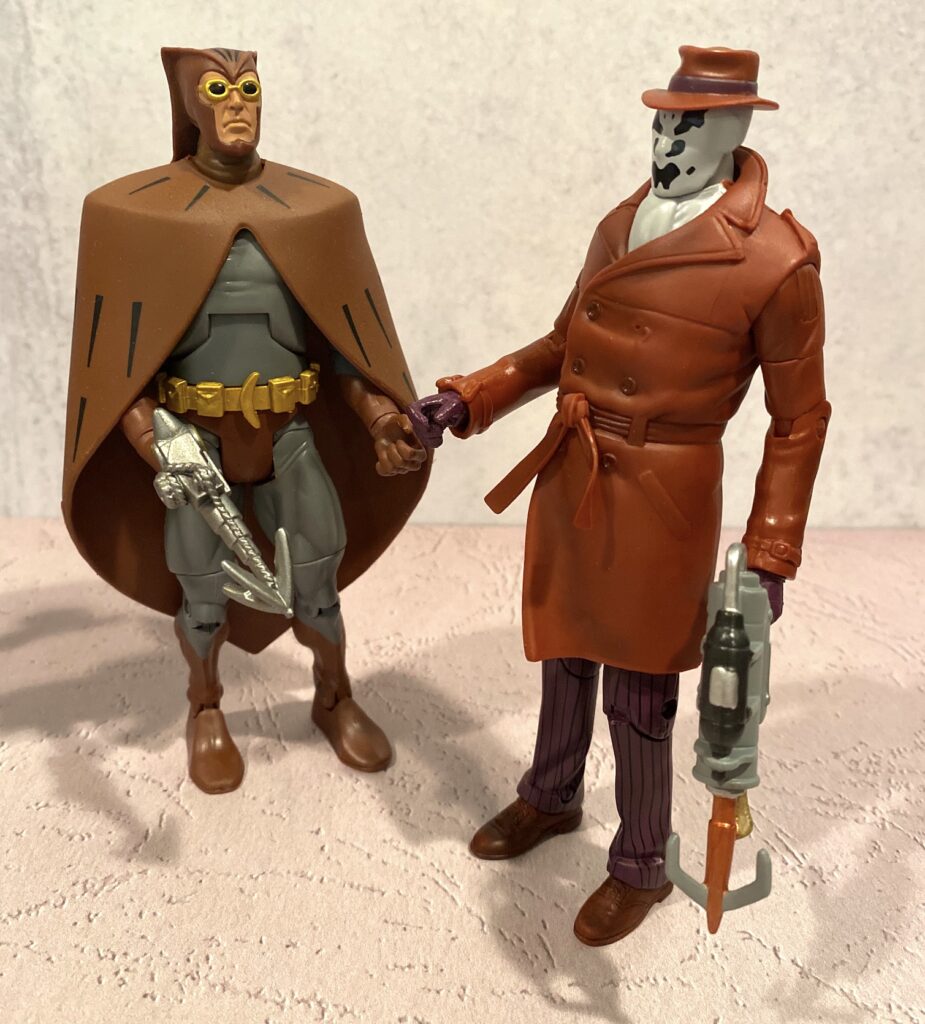 These two were so made for each other. 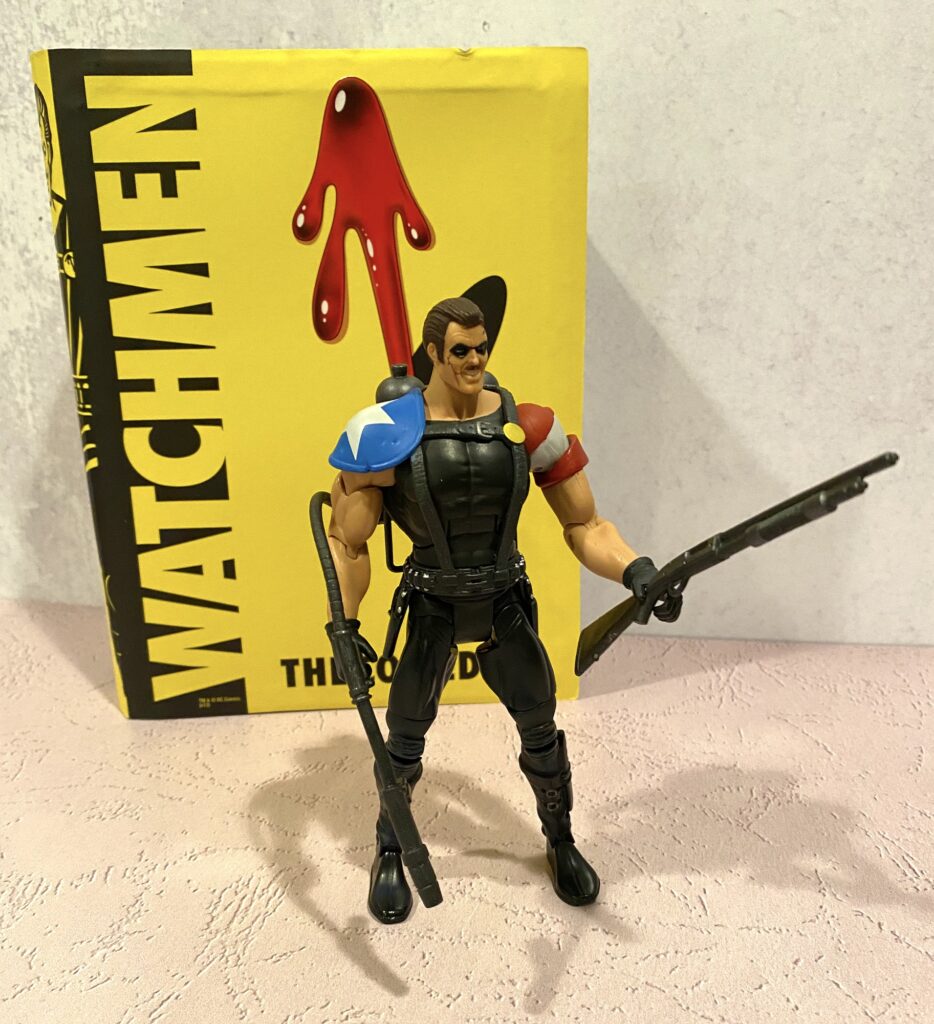 This Edward Blake (The Comedian) figure is nearly perfect. I love the color scheme and overall style. He sports his traditional shotgun and flame thrower. 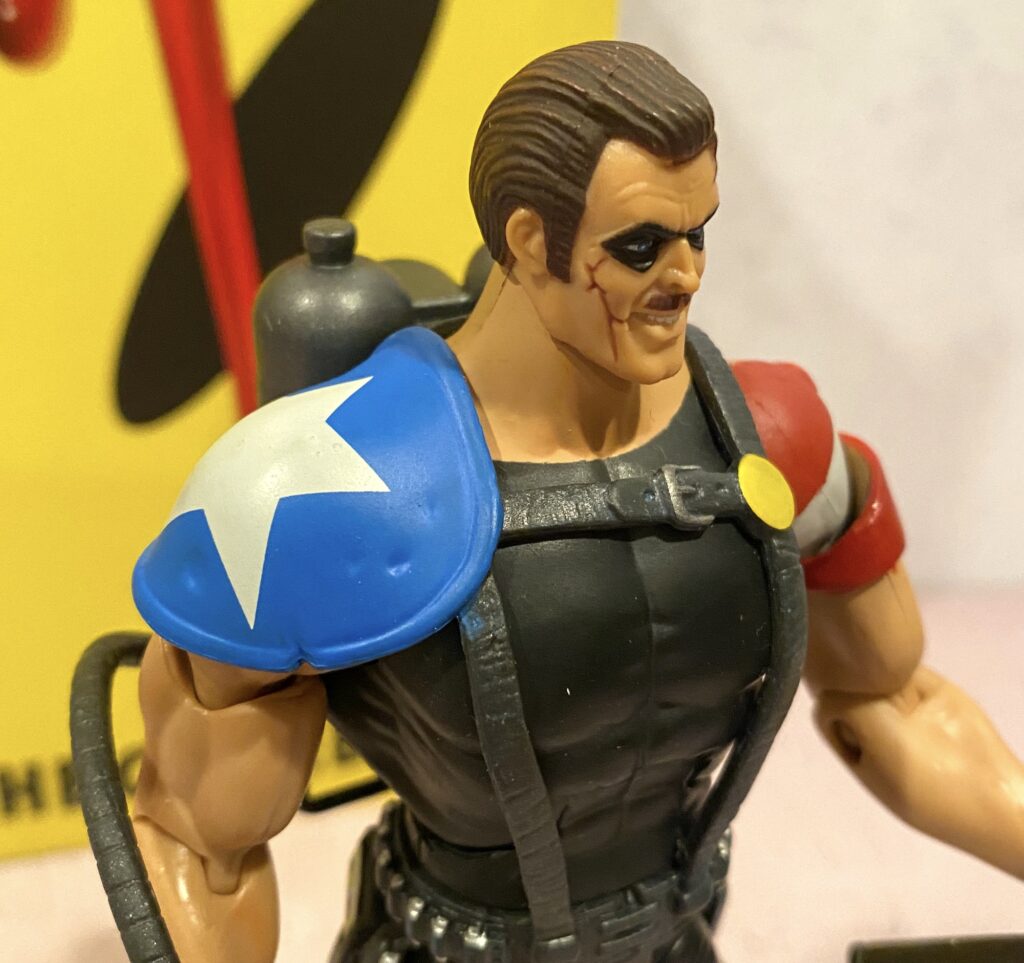 On the close-up, you can see the scar on his right cheek, courtesy of a broken beer bottle jammed in his face back in Vietnam. But I say “nearly” perfect, because of one little thing that’s missing.

He has the yellow button on the upper left side of his torso, but there’s no detail on it. It’s clearly the smiley face button that’s later covered in blood. I mean, this is THE most iconic element of Watchmen. It just needed a tiny face added to it and it would have been 100% perfection. 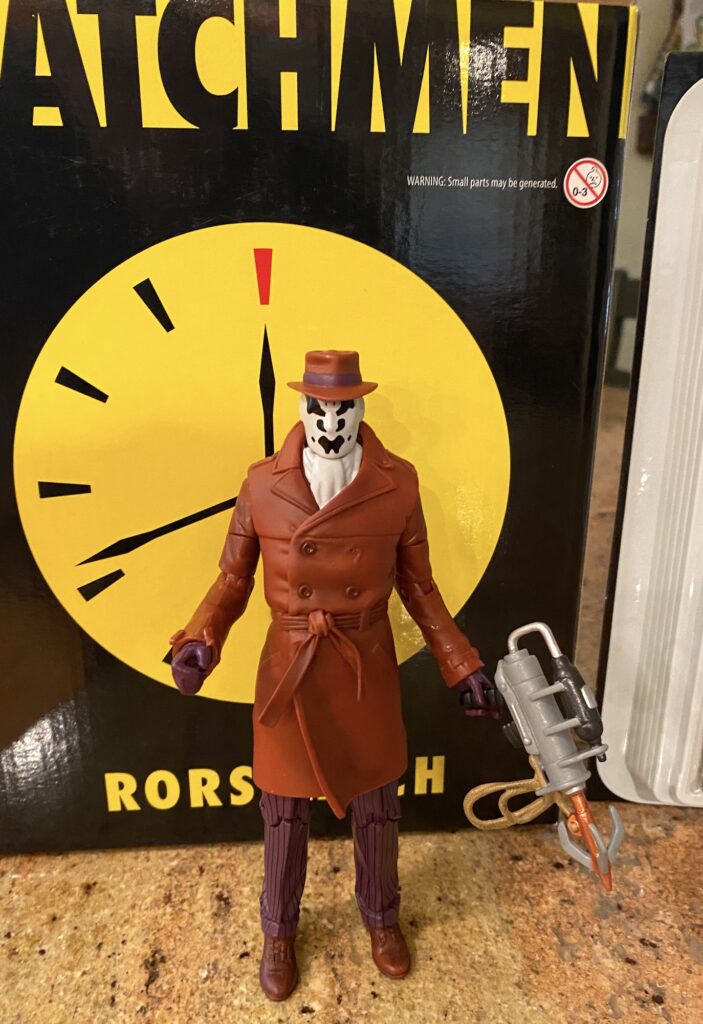 Easily one of my favorite characters from the series, Rorschach actually isn’t my favorite of the figures. He looks amazing for sure. And you gotta love the mega, oversized grappling hook. I just wish he had a little more articulation to him. And it’d be neat if he came with a second face, showing the freckled Walter Kovacs.

But just look at him. Even the color of his coat hit perfectly. 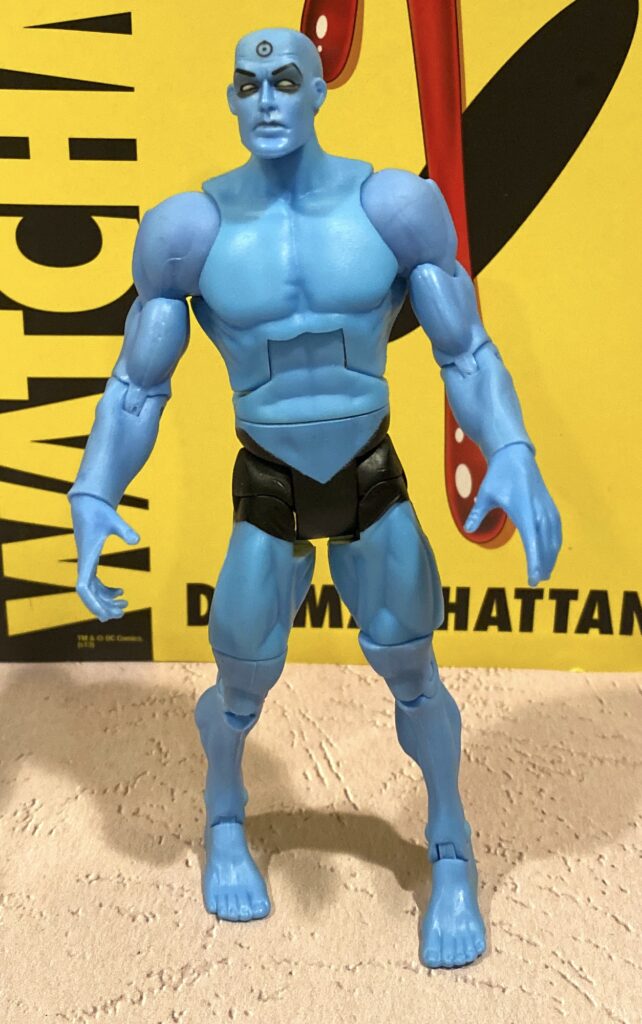 The godlike Dr. Manhattan is possibly my least favorite of the bunch. I mean I love the coloring, but his face sculpt is a little off, and I wish he was a lot taller/bigger than the other figures. He’s supposed to be towering over everyone or at the very least “floating.”

I am thankful he has his speedo on, though. 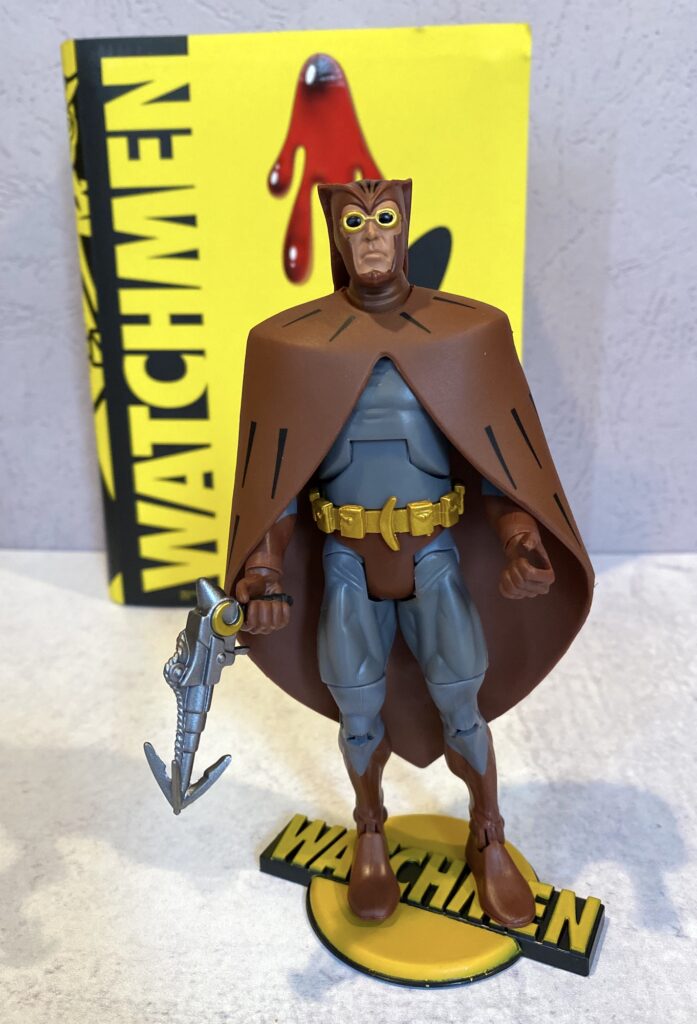 When it comes to the Watchmen movie, I really couldn’t stand Ozymandias and Nite Owl’s costumes. They were too armor-like, rather than cloth. Which is why I’m so enamored with this Nite Owl Watchmen figure.

The dopey goggle expression on Dan’s face is exactly how I picture him. I think he’s my favorite figure of the set. 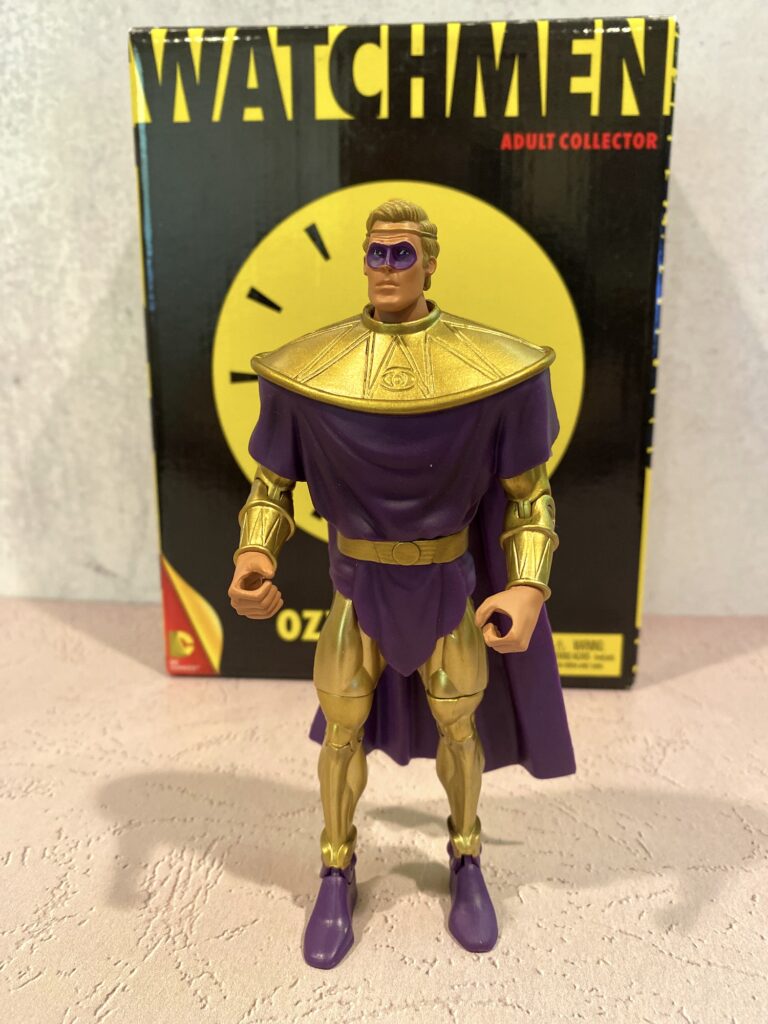 It’s not easy to pull off purple, but in Ozymandias’ hands, it just screams “regal.” This costume would have been so much better in the movie, especially the mask. I do love that he comes with an extra maskless head, but sadly no Bubastis.

My only gripe on Adrian Veidt here is that his Watchmen figure is limited in upper arm articulation. I was dying to put him in the “I DID IT!” pose with his arms straight up, but they wouldn’t even come close. 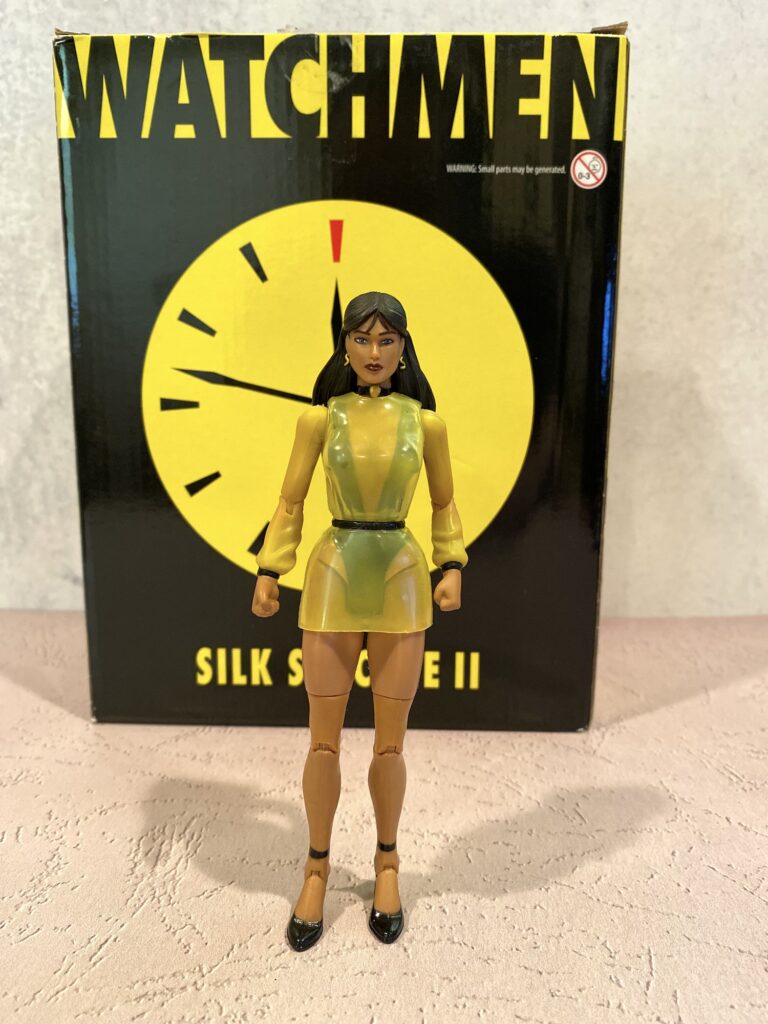 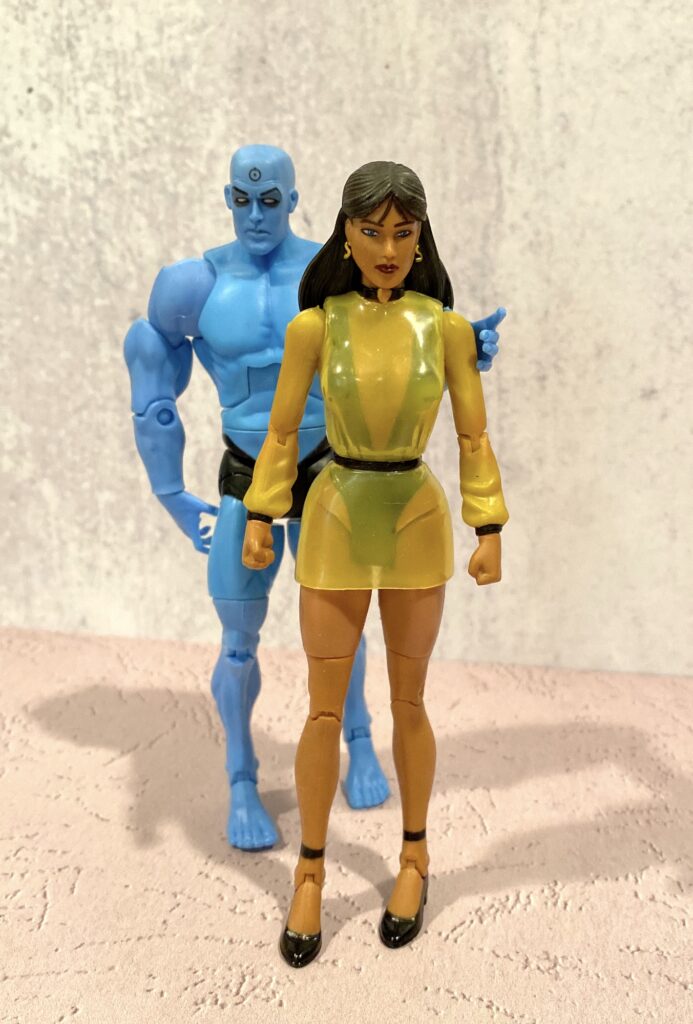 A good character in the comic (she helps bridge us between Dr. Manhattan’s godlike absurdity and Nite Owl’s more mundane reality), there isn’t much to Silk Spectre’s Watchmen figure. Her face sculpt is pretty close to the comic, as is her overall look.

My only gripe here would be that she’s so thin, it’s pretty hard to get her to stand up without using the included Watchmen action figure stands. 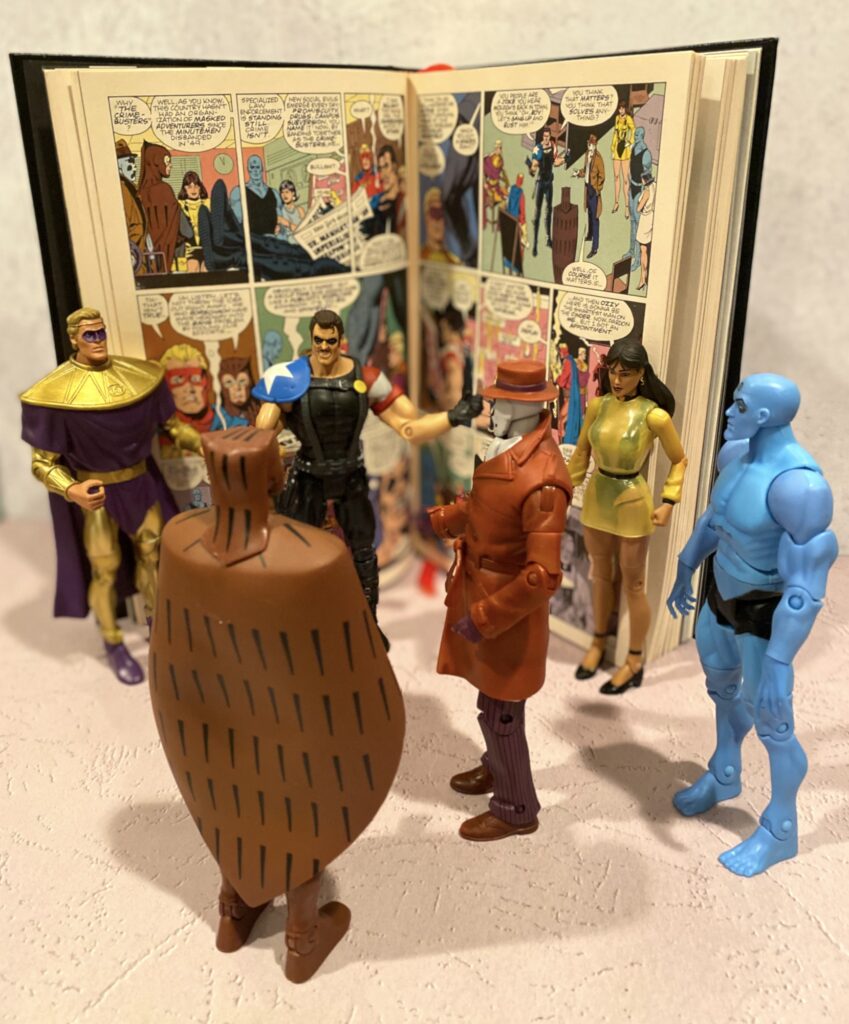 I clearly had way too much fun with these Watchmen action figures, even trying to recreate comic book panels with them. 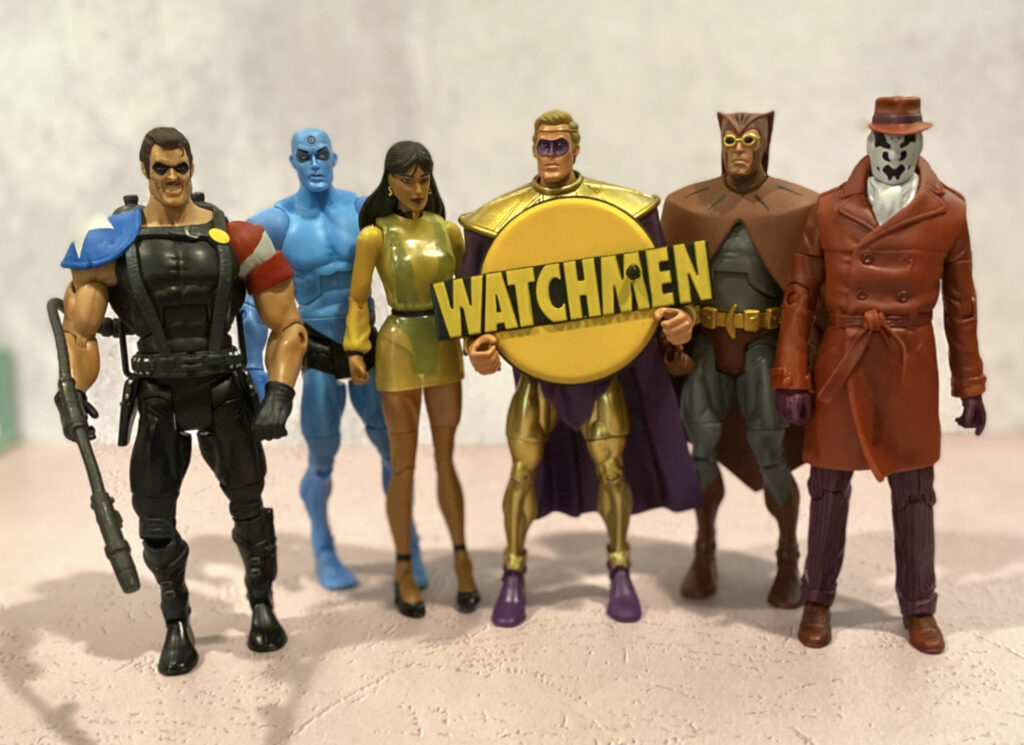 As a team, the Watchmen action figures are a pretty spectacular bunch. They may be the most dysfunctional superhero team of all time, but they’re easily the most entertaining.

Here’s hoping Mattel gets back to them and puts out a second wave based on some of the other characters, including the original Minutemen.

“Who watches the Watchmen?” you may ask. That’s easy. Me!