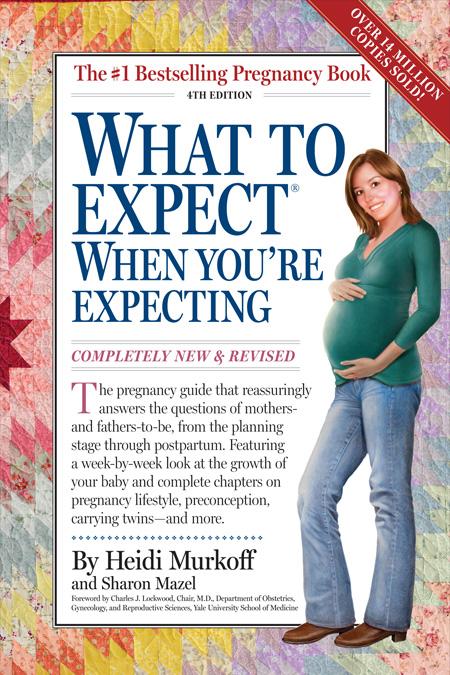 Apparently they made a movie based on the Mommy Bible, a.k.a. What to Expect When You’re Expecting. What’s next, a romantic comedy version of Everybody Poops?

Seriously, I’m sure other than some knocked-up women and the title of the movie itself, there’s probably not too much in common between the resourceful manual and the Cameron Diaz bouncing film. I remember my wife reading this one in sheer terror, learning all sorts of frightening pregnancy things. That whole “black line” thing still freaks her out.

What about us poor dads, though? No one ever gave us fair warning. Whenever I told someone we were expecting, all I ever heard after the sound of laughter was to “get your sleep while you can.” But there were plenty of other lessons I could’ve learned! If only I had a time machine. Where’s Doc Brown when you need him?

I may not be able to help my younger (and therefore less wiser) self at this point, but I can at least pass on some words of wisdom to all the other proud poppas in waiting! So I give you…

1. Wear a cup. Don’t laugh, this is the most important lesson. My kids are 7 and 9 and I still get kicked in the yabbos when roughhousing with them. Infants and toddlers are 100x worse. They may be clear across the house, on a different floor even. Somehow, someway, they’ll find you. And step on your crotch.

2. That first poop is a doozy. No words can do it justice. But when your baby makes his or her first poop in the hospital, holy cow. It’s like someone shoved an M-80 inside of a 96 oz. jar of Hershey’s syrup and lit the fuse. Apparently it’s called Meconium and it’s everything that’s been building up for nine months inside your little guy or gal. Thick, dark and super tarry. My jaw hit the floor the first time I saw it and my wife screamed at me to stop, because she almost ripped her stitches from laughing so hard at my expression.

3. Say, ‘Ta Ta’ to the Ta Tas. You knew it was coming, but once that baby’s here, it’s hands off (literally) for you. Whether your wife’s breastfeeding or not, don’t even think of looking at her milk factories. Which is really one of nature’s cruelest jokes, since your wife’s chest probably won’t ever be as huge as it is when she’s nursing.

4. Sleep when you’re dead. Whoever came up with that expression was obviously a parent. Yeah, yeah. You’ve heard it before. Babies cry. Babies wake up. A lot. And guess what, it’s 10000% true. They’ll wake you up at 3 a.m., you’ll have to change them, feed them, burp them, then put them down only to have them wake up again by the time you’re done. It’s a horrible vicious cycle that won’t stop until they’re teenagers. And then you’ll have different problems to deal with. So grab a cat nap any time you can!

5. Again with the poop? I already covered that first doozy of a poop. But geez. Who knew babies would literally spend like 85% of their time dropping loads in their diapers? I honestly remember going through seven, yes seven, diapers in one shot when changing our first son once. As soon as I was done cleaning him off, I’d wait a bit, put on a fresh clean diaper, start putting his clothes back on and… BRAAAAAAP. Time for another change. If they’re not eating or sleeping, chances are, your baby’s pooping.

7. Babies are dumb. Sorry to be so cold, but it’s true. Maybe it’s because their brains haven’t actually learned anything yet. Who knows? But for some zany reason, infants love shoving anything and everything into their mouths. A ball. Your keys. Your cell phone. That winning Lottery ticket. So hopefully you’re a bit smarter than your kid at this point. Babyproof the hell out of your house to keep that little guy or gal safe. If you’re not sure how to do it yourself, hire someone.

8. Don’t fall for it. Chances are, your kid’s first word will be “dada.” I don’t mean to burst your bubble, but it’s not because you’re more popular than mommy. It’s because Ds are easier to pronounce than Ms. Doesn’t mean you can’t totally milk the hell out of it like most dads do, though.

9. This is why you don’t have nice things. In other words, expect your clothes to suddenly be covered in a cornucopia of stains. From basic spitup to brightly colored baby food, your clothes can basically tell your child’s food history. Also, heed my warning: do not ever hold your baby high up in the air right after they’ve eaten. Oh, and buy a smock.

10. It’s so worth it. Despite these messy, stinky, scary moments, having a kid is really just indescribable. The amount of love you’ll find in your heart is staggering, as well as the love you’ll gain back. So yeah, even with the crazy expenses and helpless feelings, babies really do have the best ROI.