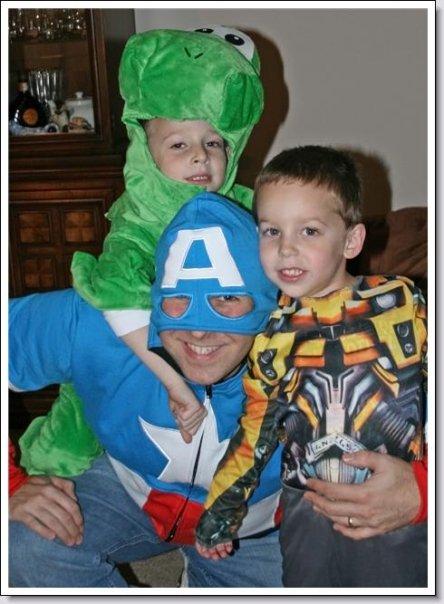 When I was dating my wife (well, she wasn’t my wife at the time obviously), I remember that super special moment so clearly. I proudly presented her to my friends as if she were a Near Mint copy of Avengers #4. She was my trophy wife… er, trophy girlfriend. I pointed at a picture and asked her who that character was.

“Nightcrawler,” she responded easily, before starting a conversation about Jean Grey turning into Dark Phoenix.

Yeah, this was way before the first X-Men movie came out. She was into cartoons and tolerated my comic book love enough to actually learn some obscure characters. And fellow geeks, you don’t let one of those types get away.

Now that we’re married with two kids, I feel it’s my duty to geekify them as well. I’ve been doing a pretty good job so far. Heck, our first potty seat proudly featured Spider-Man and Friends on it. My oldest son is a big DC Fan now, while the youngest is partial to Marvel. They’re not into the actual comic books themselves (yet), but I’m working on it. They like the characters and that’s a great start if you ask me.

But as a Geek Dad, I realize I have a very important responsibility. There’s an entire curriculum of geekdom to pass on to my offspring. So I thought long and hard (or at least 15 minutes) and came up with a list of…

The 10 Geekiest Things I Need to Teach My Kids

1. Star Wars is cooler than Star Trek. Sorry, but there’s no debating this one. In fact, the only people who still do debate this are Trekkies. Or Trekkers. Or Tre… well, that just proves the point.

2. The Hulk was supposed to be gray. It’s true. In his very first appearance, the Incredible Hulk was gray, not green. Too bland? Too scary? Nope. The printer just had trouble with the gray shades, so Marvel changed the color to green in his next issue.

3. Superman is super boring. It all boils down to one thing: he’s too powerful. When you’re near invulnerable, super strong and can fly (among way too many other silly powers), there’s just nothing exciting about a character like that. Where’s the risk? Give me Batman over the Man of Steel any day of the week.

5. The Atari 2600 is the greatest console of all time. Kids today and their newfangled video game systems with their newfangled motion sensors and newfangled 3D portable Nintendos. In the good ol’ days, we didn’t have 10 buttons on our controllers. We had one. And it wasn’t a “controller,” it was a joystick. And we played River Raid and Pitfall and Adventure. And it was good.

6. The Green Lantern Oath. “In brightest day, in blackest night, no evil shall escape my sight. Let those who worship evil’s might, beware my power, Green Lantern’s light.”

7. Up, Up, Down, Down, Left, Right, Left, Right, B, A, Start. I know today’s kids don’t even know what a “Contra” is, but I still think it’s vital they learn this magical cheat that unlocked video game nirvana so many years ago.

8. Pluto is too a planet. Eat it, scientists. Next you’ll tell us the world really is flat.

9. Greedo didn’t shoot first. Most kids have only seen the Star Wars Special Editions, thanks to George Lucas going incredibly out of his way to completely bury the original version of the Original Trilogy as much as he can. The cosmetic changes I can live with. Some are even cool. But making Greedo shoot first completely emasculated Han Solo. And nobody likes seeing Solo in a dress.

10. Shazam! I loved Captain Marvel as a kid and how he tied into all that old mythology. I know there’ve been a few reboots in the comics, and frankly, I don’t even want to know what they’ve done to poor Billy Batson. But what I do know is that I want my kids to learn what Shazam stands for:

The wisdom of Solomon.
The strength of Hercules.
The stamina of Atlas
The power of Zeus
The courage of Achilles
The speed of Mercury

Fine, so these may not be the most important life lessons I can impart on my two kids. But if I can get them to learn even half these lessons, I’ll have fulfilled my duty and the Geek shall truly inherit the Earth.