Trisha over at MomDot.com wrote a really fun post today where she showed off five photos from her house, that each teach you something about her. She challenged everyone to join in on the fun. This is what we in the blogosphere refer to as a “blog carnival.” (Don’t worry, I was wondering where the elephants and Ferris wheels were too.) Anyways, here’s my attempt!

The kids’ playroom is chock full of bins (my wife just LOVES bins), most of which have various characters (superheroes, Star Wars, Imaginext). My wife used to be a tyrant with the bins and put on her drill sergeant uniform, barking orders at everyone to clean up and put the correct toys in the correct bins. 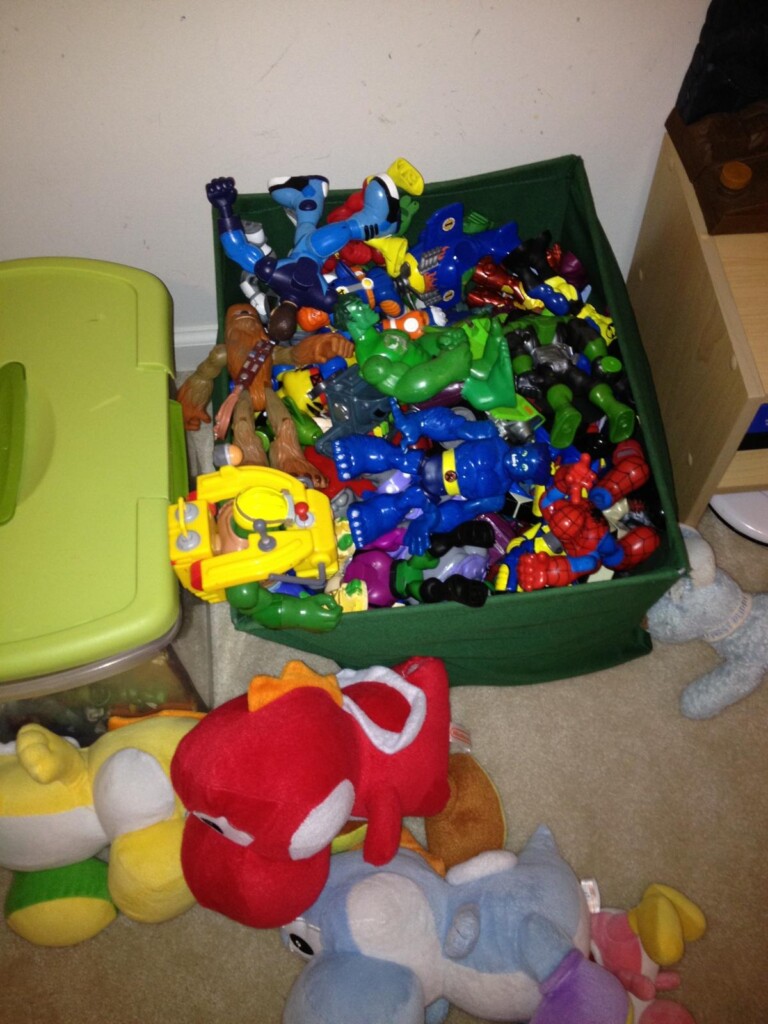 This the dresser in Jason’s room. You can see the Nintendo posters on the wall, a bunch of Marvel superhero comics from the library, and a stack of Marvel Universe trade paperbacks that were mine from my childhood. I recently found those and thought he’d love the superhero reference books, which he did. You can also make out a tiny Captain America shield, SpongeBob and Ben 10 wall stickers, and yes, that yellow dresser was my wife’s from when she was a little girl! Shhh, don’t tell Jason! (Getting the kids new furniture is definitely tops on our list.)

And this is Ryan’s dresser. He is a stuffed animal hoarder. He loves them ALL and every time he gets a new one, he runs up to his room and finds a spot for it in this mess. He plays with these all the time, but rarely sleeps with any. Jason, on the other hand, rarely plays with his, but always sleeps with a bunch. Notice the white dresser, which belonged to my wife’s sister when she was a kid. 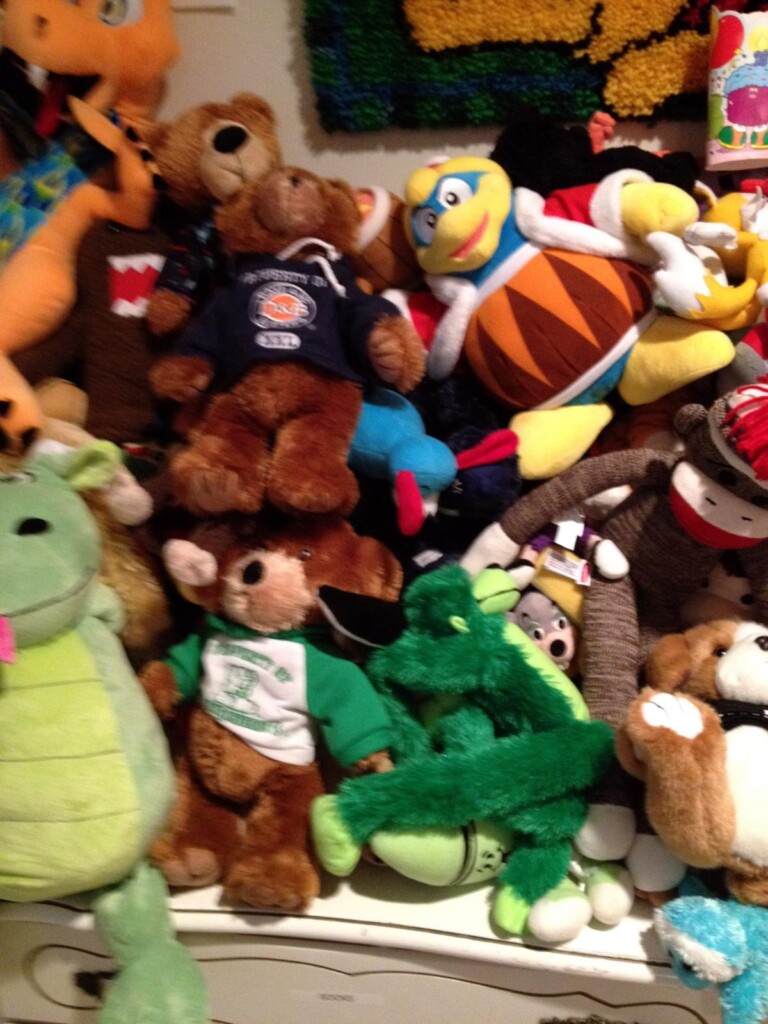 My wife is a huge animal lover, particularly birds. And her favoritest bird of all is the puffin. She’s more than put up with my video game/comic book shenanigans, so the least I can do is giver her a small Puffin corner to display her various puffin collectibles. There’s a couple of statues, a puffin plate (which is awesome for serving sushi on), and that photo is a family photo being chased by dinosaurs from the Museum of Natural History in NYC. 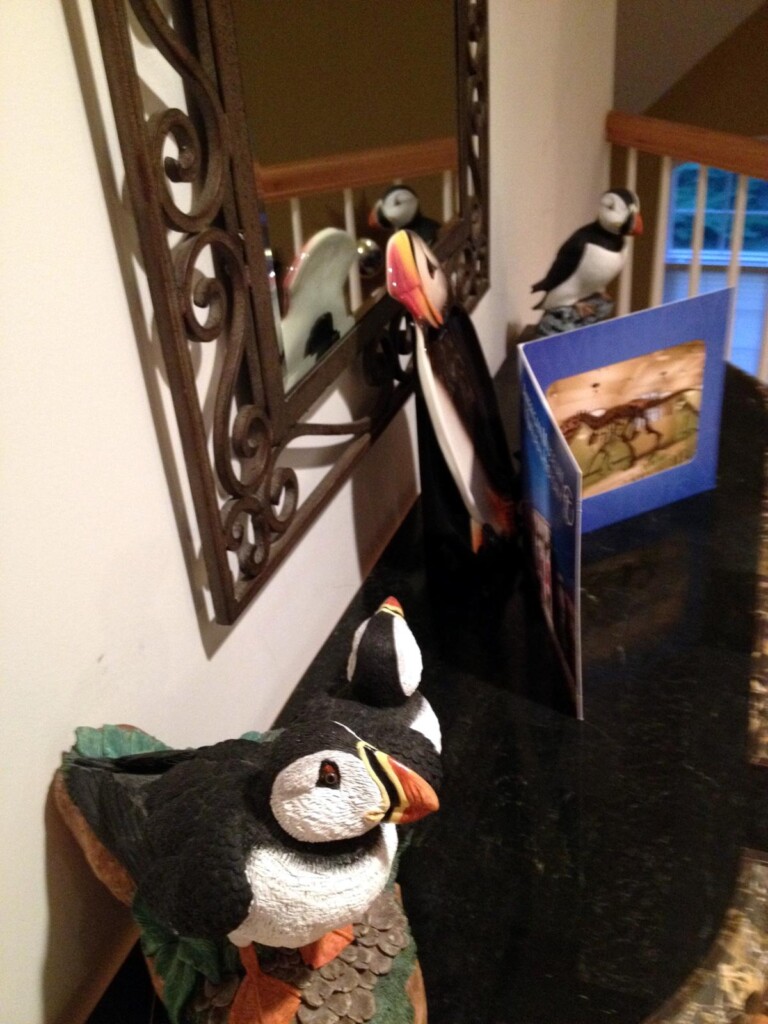 And we end our tour in my home office. That’s the bookcases containing all my comic book trade paperbacks (I got rid of probably twice as many on ebay over the years). You can also make out my Essential Calvin & Hobbes slipcase edition, a Super Grover action figure, Marvel statues, and yes, a Watchmen tin lunchbox. 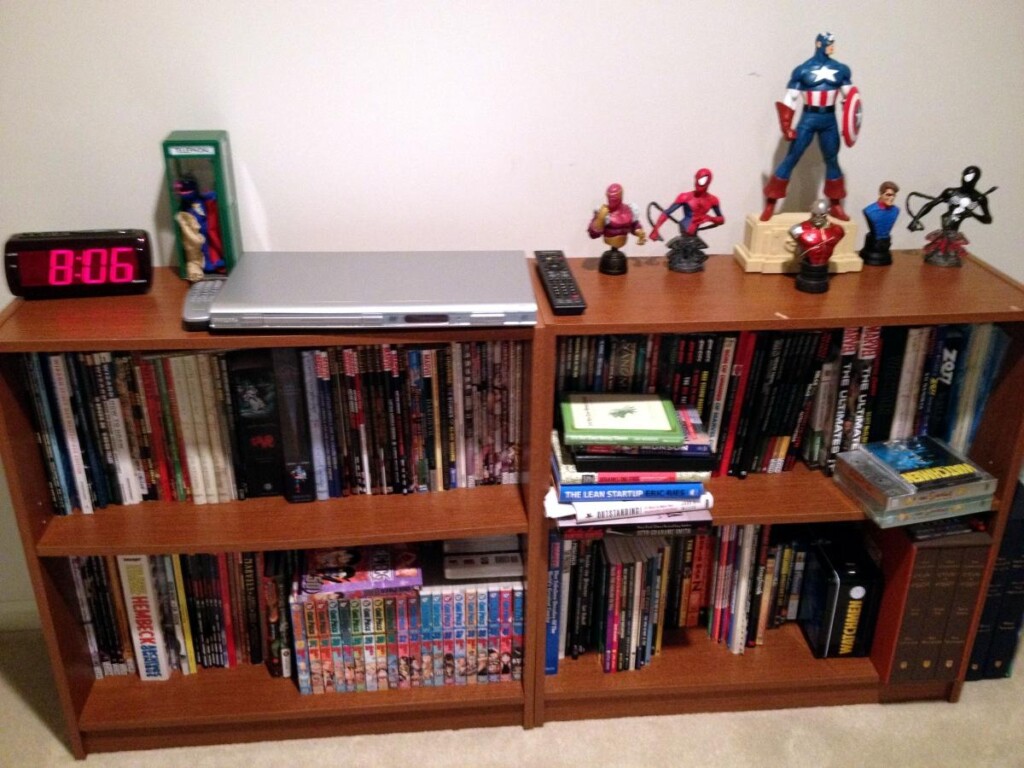 Hope you enjoyed this tour! I’d love to hear what’s in your home, or better yet, hop on board the carnival and share your link below!