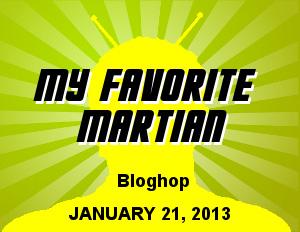 Recently, my blogging partner in geekiness Natasha invited me to participate in a fun-sounding blog hop. The My Favorite Martian Blog Hop is just a way for bloggers to write about their favorite science-fiction aliens. Despite the Hop’s name, the character doesn’t actually have to be from Mars.

Hosted by The Geek Twins, and co-hosted by Just a Dash of Geek, L.K.Hill, and Comic Book and Movie Reviews, anyone can join in on the fun simply by writing a post about their favorite alien, and then adding the post’s URL to the linky widget at the end of this post.

So, now that the big day is here, who did I choose to write about? Who is my favoritest spaceman ever?

Well, I thought long and hard about this. Because, well, that’s what us geeks do. We revel in geeky debates about who’s stronger, faster or all-around cooler.

I started by thinking about Mars. I could write about the Martian Manhunter. I like the green-skinned Justice Leaguer who really is more powerful than Superman. Which is kind of why I don’t really love the guy. Except for a fear of fire, this guy is pretty near invincible.

Then there’s John Carter of Mars. I’m not talking about the movie. And technically Jon is from Earth so he doesn’t count. But how cool is the four-armed Tars Tarkas from Mars? Awesome looking and a great fighter. But still, that doesn’t make for topping my list.

There’s the hysterically deadly Martians from Mars Attacks. Just hearing their voices leaves me in stitches. But they’re kind of like bad guys. Well, okay, they are bad guys. And they’re bent on destroying our planet. So I’ll pass.

I could look back to Arnold Schwarzenegger in Total Recall. He visited a Mars full of crazy fascinating aliens including a three breasted prostitute. Intriguing? Yes. But I can’t make my decision based solely on superficial means.

No, I’d have to say my all-time favorite Martian is actually a funny little guy named Marvin. Yes, he’s also determined to completely obliterate Earth in the 24th and a half century, but he’s fairly incompetent and has a cute dog called K-9 as a pet. Plus you just can’t beat his voice or his weapons like the Illudium Q-36 Explosive Space Modulator .

However, that’s not my favorite alien, just my favorite Martian. There are plenty of aliens that are just too amazingly cool. Technically anyone from Star Wars is an alien, so they all make my list, with Bossk topping it solely on the coolness factor. And I’ve loved so many sci-fi movies and TV shows that I could start an entire blog dedicated to the topic. Not a bad idea actually…

Back in college, I had a friend who was obsessed with this lame science fiction show. I found it boring, ridiculous and full of the most pathetic special effects you could imagine. It’s an old show for sure and despite goign through a number of actor changes and story angles, I still found it unwatchable.

And then a few years ago, the entire series a major kick in the pants, modernizing the whole thing and injecting completely new life into a dusty old series. I resisted at first but watched with my wife and after just two episodes I was instantly hooked. And now five or so years later, I’m still hooked.

Yes, I’m talking about the show Doctor Who. And I know I’ll probably tick off many Whovians by saying I can’t stand the old series (just as I also find the Original Star Trek a yawnfest), but I have to say that the modern day Doctor is one of the coolest aliens I’ve ever known.

There’ve been three Doctors so far on the new show (Christopher Eccleston, David Tennant and the most recent Matt Smith), but my favorite of them all has to be Eccleston’s version of The Doctor. He’s the Ninth Incarnation of Doctor Who. Yes he looks human, but he’s not. He’s a Time Lord burdened with the task of traveling through space and time to save civilizations and keep the time stream on course.

The show is still cheesy, I’ll admit, but Eccleston’s Doctor was angry and determined. You can tell this is a character who’s lived through countless battles and seen way too many horrors for one individual. He’s beyond sick of evil winning out and will do anything and everything he can to crush all who would stand in peace’s way.

While his tenure on the show was short-lived (just one season), Eccleston’s portrayal of The Doctor was so incredible that it not only one me over to start enjoying this series that I had previously only ridiculed, but he jumped to the top of the list for my all-time favorite alien.

Tell me in the comments section below, or write your own blog post and add the URL to the linky list!

9 thoughts on “A Blog Hop From Out of This World: My Favorite Martian is…”