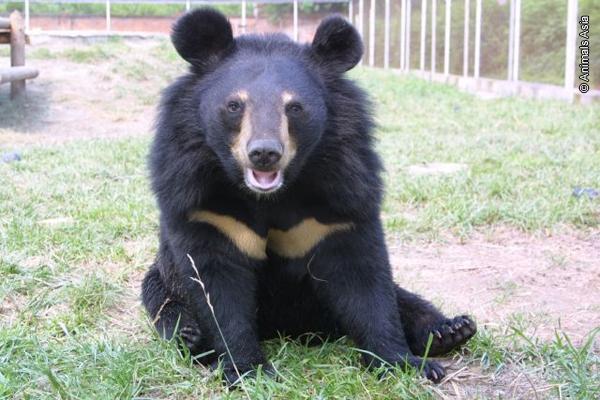 My friend Morgan (my wife’s college buddy) has also been a huge animal lover. In her California home, she’s pretty much running her own animal shelter with a dog and probably 19 cats at this point (give or take a dozen or so). She currently works for Animals Asia, an organization I had never even heard of before and one that I honestly hopes puts itself out of business.

The organization spearheads a number of wonderful initiatives, the top one being to crack down on China’s bear farming. Yes, you read that correctly. Bear farming. Hundreds of Moon Bears suffer at the hands of cruel farmers keeping them locked up in ridiculously small cages as they continuously extract bile from the bears. Put simply, it’s a barbaric practice. Animals Asia works tirelessly to free these animals and gives them sanctuary so they can live out their lives in peace.

At present, we have around 250 rescued bears at our sanctuaries in China and Vietnam and over the years, we’ve rescued a total of 350 bears. In China, we’re working with conservation leaders in Beijing as well as forestry leaders in individual provinces to close down farms and make whole provinces bear-farm free. So far, we’ve closed down 43 Chinese farms and seen 20 of mainland China’s 31 provinces become proudly bear farm-free. We also work to reduce the demand for bile in Asia by promoting affordable, effective and cruelty-free alternatives.

Thinking about the welfare of bears is probably the furthest thing on your mind. It certainly wasn’t tops on my list, until Morgan visited us a few months ago and told us first-hand stories about the barbaric practice of bile farming. It’s torture, plain and simple. She also showed us a number of videos where we saw the bear sanctuaries up close. These creatures really are majestic gentle giants and deserve far better than being stuffed in cages 100 times too small, as their bodies are brutally worn down and beaten.

Animals Asia has recently been nominated to earn a grant of up to $250,000 from Chase Community Giving! Grants are based on votes, so I’m trying to help Morgan, Animals Asia, and all the adorable Moon Bears win. If you could take a quick minute to Vote for Animals Asia, it’d be so appreciated! And if you spread the word to help them get even more votes, well, that’d just put Morgan and company over the moon.

10 thoughts on “Bear With Me – Please Vote for Animals Asia”