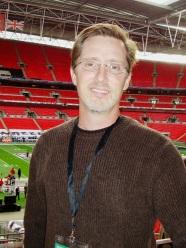 How’d your blog get its name?

When I started playing online poker (for fun; never for real money), my handle was RayScribe. When my wife took over administration of the parenting blog for the newspaper where we both once worked, she took the Twitter handle @MomScribe. So, I toyed around with several ideas before settling on the one that seemed to make the most sense.

I’m a dad. I used to be a scribe (slang for a baseball writer in particular, and a sportswriter, in general). Hence … DadScribe. And the montage of press passes pictured in the blog’s header. (Those were all mine, by the way, and the ones you can see represent only about 10 percent of the passes I’ve collected over the years.)

What do you love most about blogging?

I love to tell stories, and I miss the creative outlet writing about sports for a newspaper once gave me.

What’s the worst part about blogging?

The worst is when I write something that no one reads, or that very few people read. So … with the rare exception, that applies to just about everything I write now. My old paper had more than 200,000 Sunday subscribers, so I miss that audience. I really do. Writers want to be read. Or why bother to publish?

You’re a professional sports writer. Why not blog about sports?

I actually do write about sports, but I get what you’re saying. Hey, if someone out there wants to hire me to blog about sports full-time, I’m definitely willing to listen! But these days, my sports stories tend to be tales of my life during the nearly quarter of a century when I was lucky enough to cover things like the Tampa Bay Rays, the Buccaneers, the Lightning, and some pretty amazing high school and college athletes.

My sons are too young to know anything about that part of my life, so I actually started the blog with the goal of relating as many of those stories as possible. I still do that, but the blog has evolved into a catch-all space for whatever enters my mind to write about on a given day.

Here are a few more of my sports-related blog entries:

How is blogging different from your other professional writing?

As a reporter, everything is sourced. Even the opinion pieces (or, actually, especially the opinion pieces) need meaningful documentation or expert input for support. What that means is that features, columns, news stories, even game stories needed to be meticulously researched. Also, any story that makes it into print goes through a stringent editing process (or used to, anyway, before news organizations began to gut the inside editing staffs). The entire process could take days on big, enterprise-level projects. Of course, it was much more compact during the daily grind of a baseball season. Finally, it goes back to audience. When I wrote for The Tampa Tribune, or for ESPN.com, or for CBSSports.com, or for any other publication or website, I knew my stuff would have readers. That was a luxury I don’t enjoy these days. I’d like to change that, certainly.

A blog post? Well, for me, it’s more stream of consciousness. I get the germ of an idea, then write a draft in Word, then edit the heck out of it before I publish. Then, I read it again online and, aghast, quickly go back and edit out the stupid typos that I somehow missed. My journalism background honed my ability to write on deadline, and I still operate best that way. So, I’ll usually write something in one fast go, then read it and clean it up, then post it. Rarely will it take me longer than two hours from start to finish.

Does your family read your blog? Ever get in trouble because of it?

My family does read, thank God. Otherwise, my readership would be cut in half. I’ve never gotten in trouble with them, but I did upset some religious friends when I wrote this.

It remains, by far, my most-read blog entry. It also alienated some people I like a lot, but … well, I just try to write the truth about things that interest me.

How has blogging affected your life?

The creative outlet it has given me was something I didn’t even know how much I needed. I write something now, and I feel that same rush I felt when there was a good, well-reported, well-written feature or news story about to hit the newsstand. It’s a sense of creative accomplishment I don’t get from my full-time job, which is fine, because I do that job to pay the bills. This, though, lets me write what I want, how I want, when I want, and there’s a freedom there that I haven’t experienced doing anything else since I got out of newspapers in 2008.

Have you met other bloggers in person? Is it awkward?

As of this writing in mid-January, I have only met other bloggers virtually. That is, through Facebook, Twitter, emails, etc. It’s kind of weird, actually. My old job was always about being there, face-to-face, really getting to know the people I wrote about, and seeing history unfold in front of me. This experience has been pretty cool, because I’ve found support in my writing and rewarding give-and-take with others who I would never have come into contact with if not for the DadScribe blog.

Now, I might have a more interesting answer to this question in February, because I’m going to Dad 2.0 Summit as a speaker (or, to be precise, a reader) and I’m very much looking forward to putting faces and voices and in-real-life personalities to all the many social media posts and amazing blog posts I’ve devoured in the year since I started blogging in earnest in February 2012.

It was from a former attempt at blogging and it was picked up by Deadspin and turned into a viral embarrassment to me and I quickly eliminated the post, the blog, and any other evidence that it ever existed and yet, when you Google my name, it still comes up on the first page. And that’s all I have to say about that.

Although, I will say it was a funny story from my days as a baseball writer, and I hope to one day revisit it and share it with the world again. Until that day, though, it’ll just have to be one of those Google legends, like Rick Santorum.

(Oh, all right. I’ll give you a hint. It involved baseball players, the visitors’ clubhouse in Baltimore and a hotdog.)

If you could have anyone in the world (living or dead) write a guest post for your blog, who would it be?

It would be either Stephen Crane, blogging from Santiago de Cuba during the Spanish-American War; or F. Scott Fitzgerald, blogging from the Champs Elysees in 1925, right after publication of the Great Gatsby. If it was Fitzgerald, I’d watch from the wings and laugh as Hemingway thoroughly skewered them in a brutal rebuttal blog post on the Harper’s website.

Now, it is Tottenham Hotspur Football Club. Here’s why.  And thanks for asking, because it gives me the chance to introduce your readers to the only team in North London worth knowing about.

Visit DadScribe
And be sure to tell Carter that Andrew from Mommy’s Busy, Go Ask Daddy sent ya!