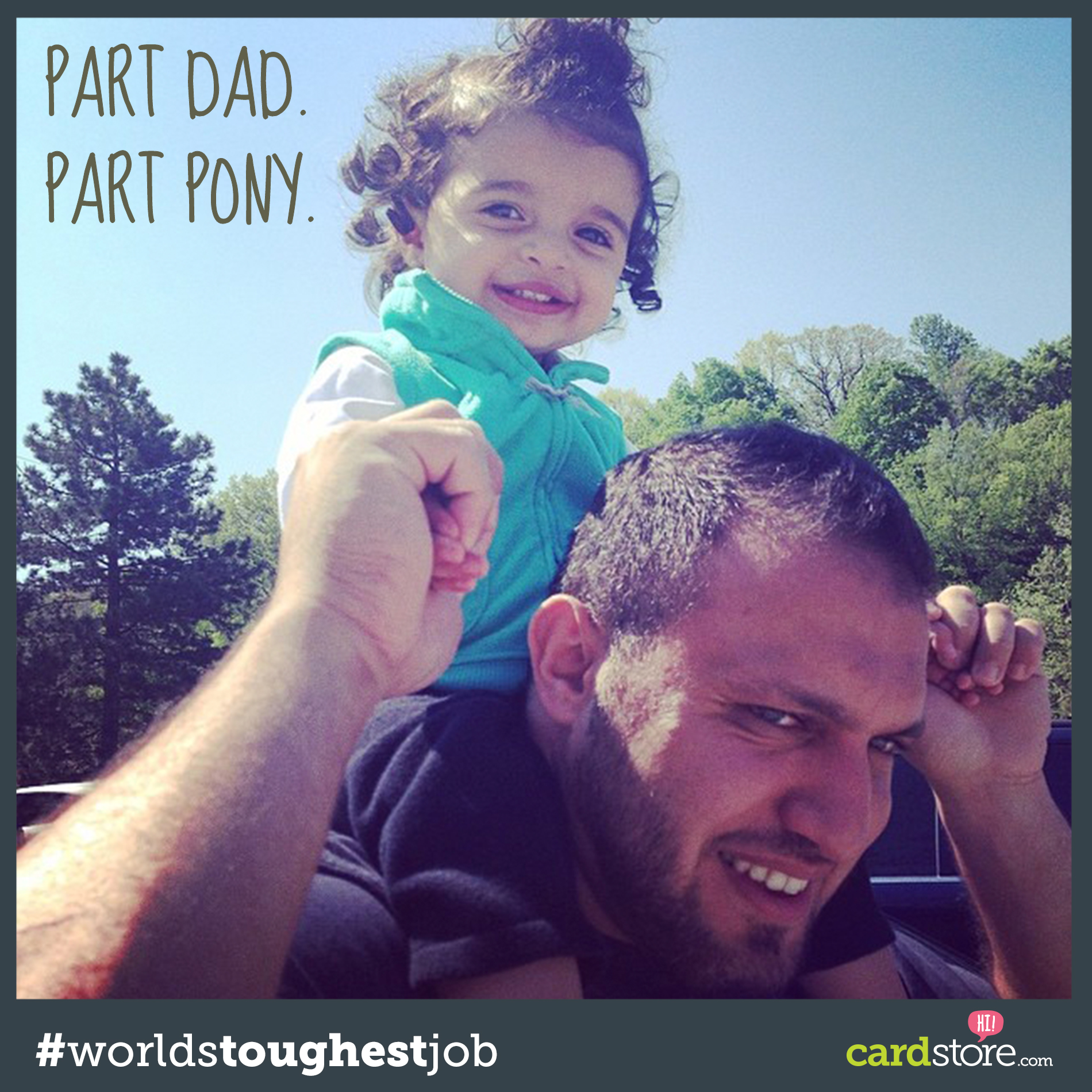 You always hear parents talk about how babies don’t come with instruction manuals. And it’s most definitely true.

I still remember coming home from the hospital with Allie and our little newborn Jason. In the hospital you have family, friends, nurses and support to keep you so busy you don’t have time to wonder what’s going on.

But once we got home, Allie and I sat on the couch with Jason next to us, sleeping quietly. We looked at each other and then literally said, “Uh, what do we do now?” It was a defining moment and one I’ll never forget.

So when Ryan came around some two years later, you’d think I’d have it all down pat no problem. But he just continued to prove that fatherhood (and of course motherhood too) is completely unscripted.

Allie was scheduled for a C-section but she ended up having him even earlier than expected when she became sick with a fever and started labor early. Which meant Ryan was born sick too, and had to stay in the hospital for awhile. I had Jason at home so I couldn’t stay with Allie at first, and when she was discharged a few days later, Ryan had to stay a few days longer. Certainly not what we expected.

Some 11 years later, I couldn’t ask for a more beautiful, loving and all-around amazing family. And there were plenty of unscripted moments throughout from Jason’s surprise middle-of-the-night appendectomy (we still don’t quite believe that one!) to Ryan saying he wants to run in a fund-raising 1-mile race (even though he never ran more than 5 feet) and finishing it with a smile. Both good and bad, every unscripted moment is special and what makes being a dad so unbelievably exciting and rewarding.

I can only think of the crazy unscripted events I put my own father through. And now he gets to play the role of grandpa which has certainly had its fair share of unscripted moments! Like the time we drove up to visit last year and took my car (which everyone else hates because they get dizzy). Ryan got out of the car, said he didn’t feel so well, ran inside and puked all over grandpa. Good times!

With Father’s Day coming up, I thought it’d be fun for the boys to send my dad a card using the Cardstore website. It was super easy to do and there are loads of ways to customize your card using your own photos. Ryan and I searched through a few different ones and picked a template we wanted to use 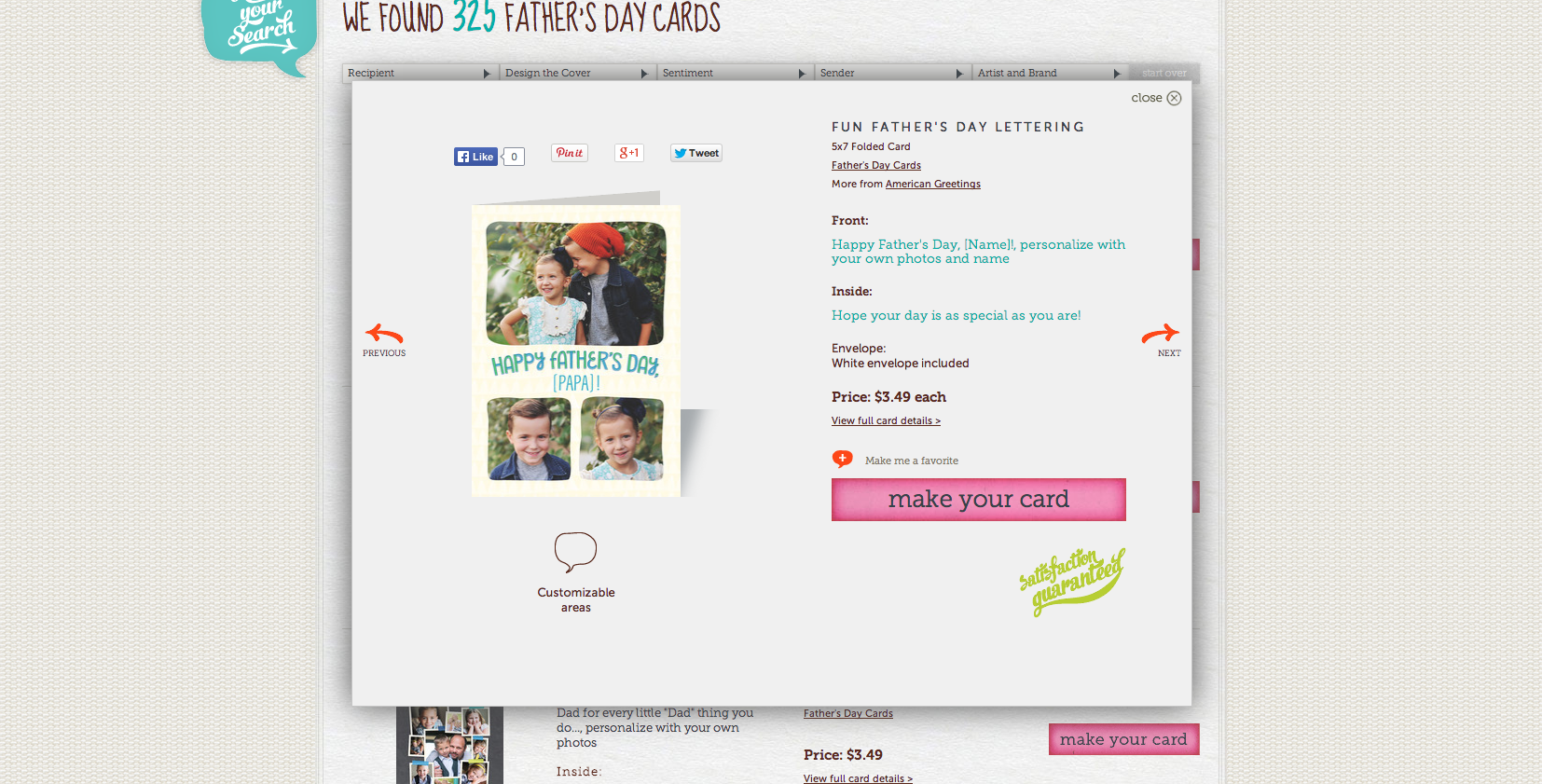 Then we put in the images we wanted and customized the text. Both super simple to do and you can even grab photos from various online accounts such as Instagram or Facebook, as well as from your hard drive. 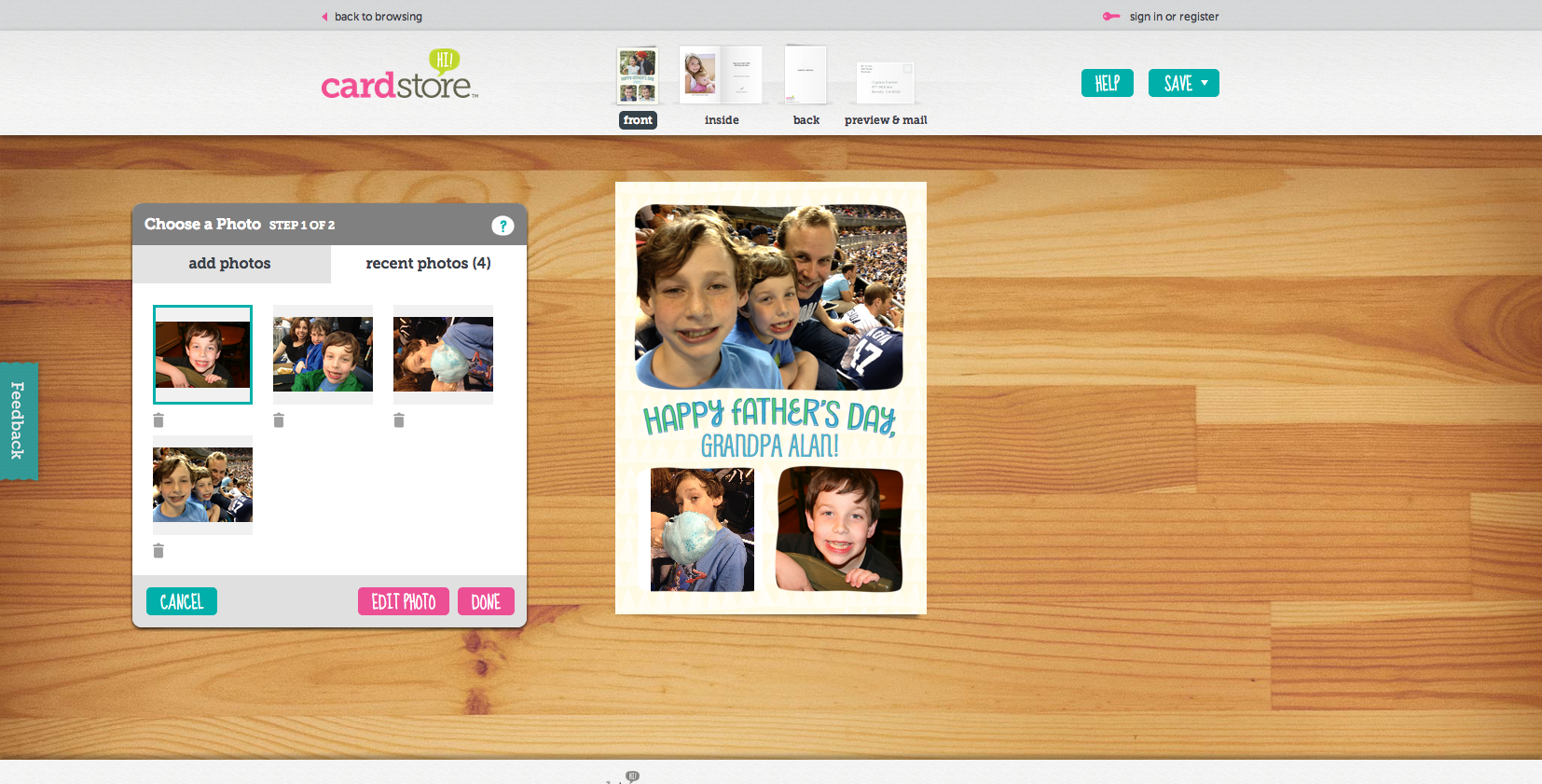 We then worked on the inside, using the pre-written message and adding our own. You can customize the greeting in terms of font type and color, as well as size. Super simple and real effective.

When you’re done, you just fill out the address information, and Cardstore will mail a physical card to dad. Pretty darn easy and personal. And it’s perfect for those, uh, dads who always wait until the last minute.

Cardstore’s really getting behind dads this year actually and running a wonderful #WorldsToughestJob campaign. As part of this campaign to help show some recognition to dads and show that it’s a lot harder than it looks, they put together a fantastic video where they took real actors and had them audition for the role of “dad.”

If you want to send a special Father’s Day card to your dad (or grandpa!), head over to Cardstore and go for it! To ensure delivery by next Sunday (Father’s Day!), you need to place your order by June 9, though, so hurry! And I’ve even got a coupon code to share with you guys! Just use code CCG4527 to get any Father’s Day card for just $2.49!

What do you think makes being a dad the #WorldsToughestJob?

Disclosure: I partnered with Cardstore from American Greetings and Life of Dad, LLC for the #WorldsToughestJob Dad Casting Father’s Day promotion and was compensated for my involvement.
Share
Tweet2
Pin
2 Shares

1 thought on “Forget Brain Surgery, Being a Dad is the #WorldsToughestJob”