There’s just something likable about Vince Vaughn. In just about every role he plays, he’s a fast-talking, semi-selfish shyster of a guy. But beneath it all, he’s got a real sensitive side. It generally takes about an hour into a movie for that side to show, and Delivery Man is no exception.

Allie and I wanted to see this one when it hit theaters but never had the opporutunity. So I was pumped when I was sent a copy of the new Blu-ray edition to review!

For those unfamiliar with the plot, no it’s not an in-depth investigation of a Domino’s Pizza Delivery Driver. Though, that’s not a bad idea, right? The story actually sees slacker David Wozniak working at his family’s butcher business, basically screwing up every chance he gets. His life takes a massive detour, however, when he’s told that he’s the accidental father of 533 children.

Uh, accidental? Well, yes. See, David had made a few (okay, a LOT) of “deposits” at a sperm bank some 20 years earlier to raise some much-needed cash. He signed forms saying any children couldn’t seek him out later in life. But Due to a mistake at the sperm bank, some 533 children were born with David as the father. What’s more, a few hundred of them have joined forces to sue for the right to learn his identity.

And from that far-fetched premise, the movie really takes off. Up until that point, the film’s a fun, lighthearted tale, but I really didn’t get into it until David started to spy on his kids and see what they’re all like. While it would’ve added a few hours (okay,  days) to the film, I would’ve loved to have seen even more interactions between David and his unknowning kids. The jobs and life issues they all faced with David’s help were fascinating and highly entertaining. 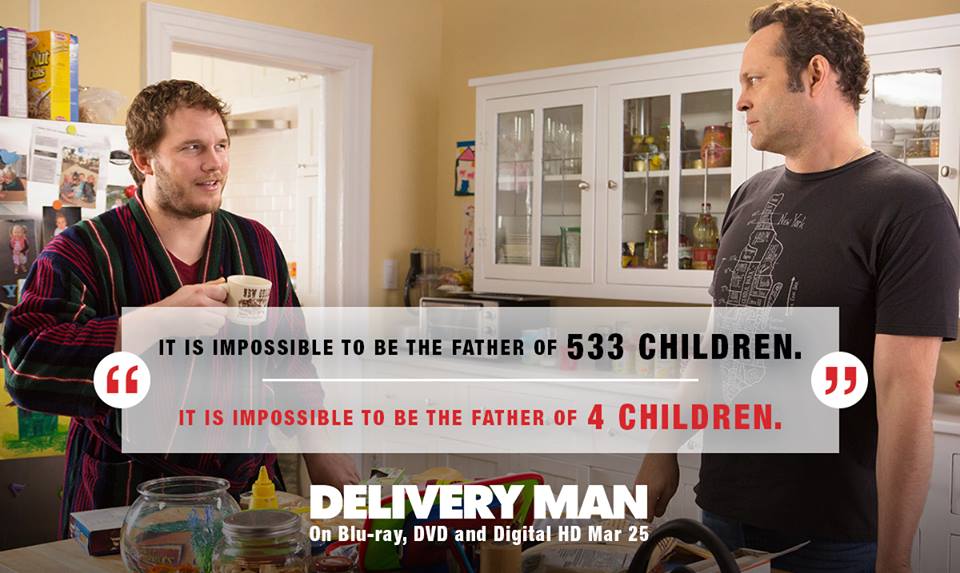 David’s buddy Brett played by Chris Pratt is spot-on perfect. He’s a dad and a lawyer and his legal and parenting advice are just plain ridiculous. And then there’s David’s awesome girlfriend Emma, played by the even-more-awesome Cobie Smulders (S.H.I.E.L.D. agent Maria Hill!). It’s really a fun all-around cast that instantly makes you feel like you’re hanging out with your friends.

I won’t spoil anything, except to say you can’t watch this entire movie and NOT walk away with a warm fuzzy feeling in your heart. It’s really a great look at an unusual family dynamic.

While older kids will probably enjoy it, Delivery Man’s not appropriate for younger kids (mine are 8 and 10 and definitely too young). Which is probably why the film’s rated PG-13. In the middle, my youngest son walked in, started watching with us and was asking loads of questions, mainly about how this one guy could have so many kids. Yeah, you try explaining a sperm bank to an 8 year old!

Overall, the movie was actually a bit more serious than I expected. That’s not a knock against it at all, I just thought it was gonna be one long joke. It has its fair share of laughs, but watching Vaughn’s character mature over the course of the film is really refreshing to watch. I actually wouldn’t be surprised if a weekly TV show was born out of this one. In the end, though, Delivery Man certainly does deliver. 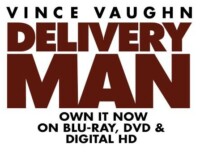