It’s no secret that the ultimate gift anyone can get me is the Lego Star Wars Death Star. It’s my #1 most-requested gift and even if I’m in my 90s in some old-age home somewhere down the line, I will own this thing before I die!

But Lego apparently lives to make my life hell because they keep putting out cooler and cooler sets! First there was Batman (LOVE my Lego Batcave). Then there was the Lego Avengers! And of course Lego Lord of the Rings. And now, well, now they’ve put out something that, well, I may just want as much as the Lego Death Star.

It’s America’s most-favoritest dysfunctional family… The Simpsons! (Try saying that without singing it, a la the opening credits.)

For just $199 you can own and build your very own Simpsons House!

You get the entire Simpsons family (That’d be Homer, Marge, Lisa, Bart and Maggie) and lovable punching-bag-of-a-neighbor Flanders! But you also get one of the most underrated characters from the show…. The Simpsons House itself! And like most awesome Lego sets, this one isn’t just pretty on the outside.

Yep, the house actually opens up and lets you play on the inside with various rooms and accessories. My favorite part is the family car and garage with working garage door! 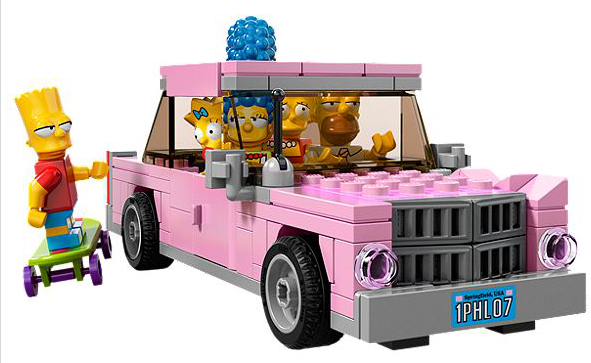 How perfect is it that Marge’s hair sticks out of the roof?

Considering the Simpsons House is roughly half the price of the Lego Death Star, I figure I have a fighting chance at snagging this one! Too bad my birthday is like four months away. Of course, Valentine’s Day is right around the corner…

I really hope this explodes into a full-fledged Simpsons line! Just think of the potential playsets:

I could go on for days, weeks, years even, but I’m fairly confident the Lego team is on top of the Simpsons so I’m not worried. I’ll just sit back and wait for the sets to come rolling in! Oh, and if Lego’s reading this and they’re looking for some solid blogger reviews, why, I’d be more than happy to help out!

Buy The Simpsons House at the Lego Shop

What Lego Simpsons set do you want to see?