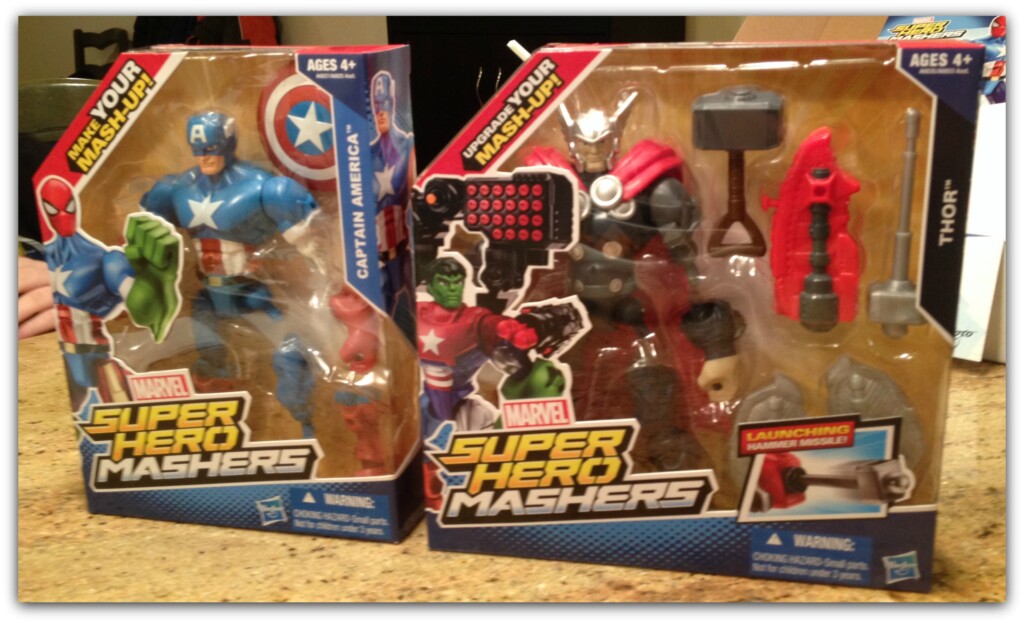 When I was a kid, chances are on any given day, you’d find Little Andrew hanging out in the basement with his best buds. No, I don’t mean my neighborhood friends Eddie, Gary or Ethan. I’m talking about my superhero action figures. Not dolls. Action figures!

I grew up with some of the coolest figures ever. They were known as Megos because, well, that was the name of the company that put these 8″ figures out. The neat part was that tons of different licenses were all part of the Mego line, so you had Batman and Superman mixed in with Spider-Man and the Hulk. You also had popular TV shows represented like Star Trek and yes, even the Dukes of Hazzard!

I’d spend hours playing superheroes and one of the really neat things was that the heads were squishy rubber and if you squeezed them just right, you could pop them off. Their bodies were loosely held together by rubber bands. No, really. So a real “superhero playa” like myself soon figured out how to fix them when they were broken. But it also meant I could mix and max as I wanted.

I often took Spock’s head and put it on a regular body, with Robin’s little green underpants. The result? None other than Prince Namor, the Sub-Mariner! It was a lot of fun mixing and matching up body parts I have to tell ya.

I still have my Mego collection and while it’d be worth some money if I kept it locked up, instead I chose to let my kids play with ’em. Except when mixed in with dozens of other superhero lines and hundreds of action figures, Megos are definitely not at the top of their list.

Hasbro sent me two figures to review: Captain America and Thor. Somehow they must’ve know that I’m Cap’s #1 fan! I ripped open the package and easily took all the pieces out. I must say, these days it can take hours and tons of twist ties to just get a figure out of its packaging. Even my kids freed these figures in just a few seconds. Kudos to the Hasbro packaging team!

Now I’ve seen lots of action figures in my day. Not just from collecting but from some previous work experience in the toy industry too. I was quite impressed with the quality of these Mashers. The plastic itself is a nice solid, chunky material that’s easy to grab hold of and thick enough that it won’t snap.

As for the fun part, well, you don’t really even need to test it to see that one! But Jason, Ryan and I dove in. You can easily take off arms, legs and heads to mix and match between characters. Swap Cap and Thor’s legs. Mix up their arms. Heads. Or heck, you can even put Thor’s legs where Cap’s arms are supposed to be!

It’s a breeze to snap the pieces on and off to create any kind of hero you’d like! 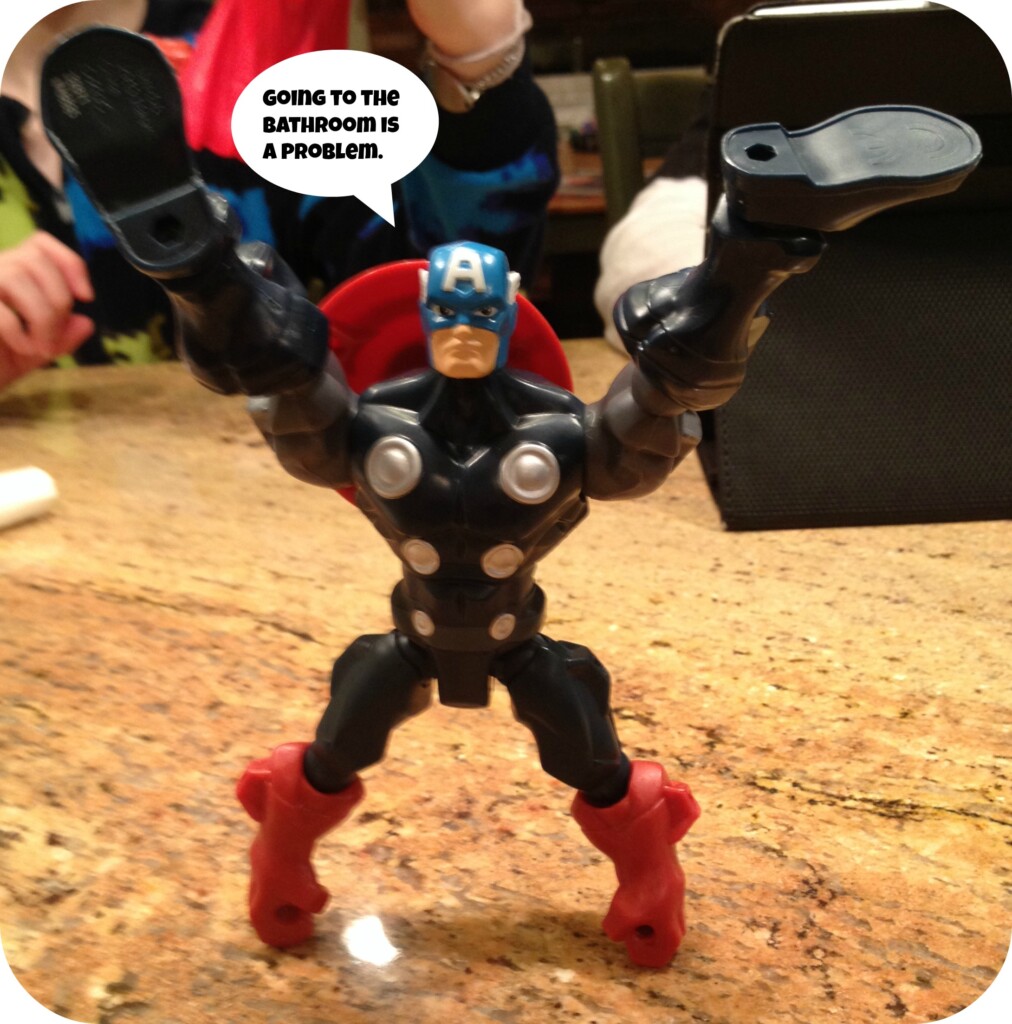 My only complaint I guess would be that I found it tough to put Thor’s hammer in his hand. I fit the strap in no problem, but had a seriously tough time getting the hammer’s handle into his hand. Other than that, it couldn’t be easier to mix and match my two Avenging action figures.

I actually wish I had a few more of these guys, especially Dr. Doom or Iron Patriot! The more figures you have, the more mashing up you can do! You can also pretend to just explode your figures and have body parts fly all over the place. I mean what kid doesn’t want to strap firecrackers to their GI Joes? Uh, not that I ever did that or anything.

MARVEL SUPER HERO MASHERS Action Figures Assortment
(Ages: 4 & up /Approx. Retail Price: $9.99/Available: January 2014)
Mash up your hero, and then crack up your friends! Hasbro’s MARVEL SUPER HERO MASHERS feature your favorite MARVEL Super Heroes and Villains with completely interchangeable parts and accessories, so kids can create their ultimate (or ultimately silly!) hero. Thirteen figures will be available in this assortment in 2014, featuring favorite Marvel characters like CAPTAIN AMERICA, SPIDER-MAN and GREEN GOBLIN. Each figure is sold separately and comes with an accessory.

Take a look at a few more examples: 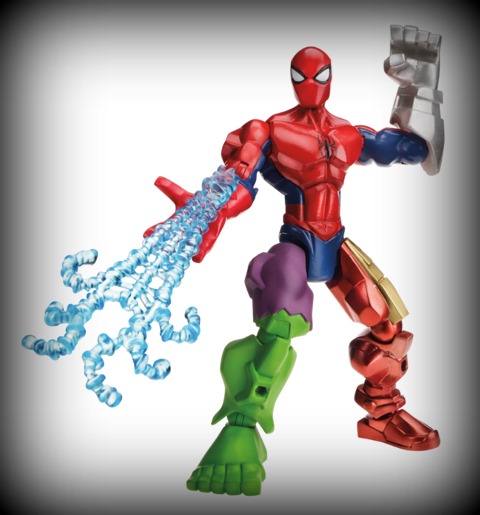 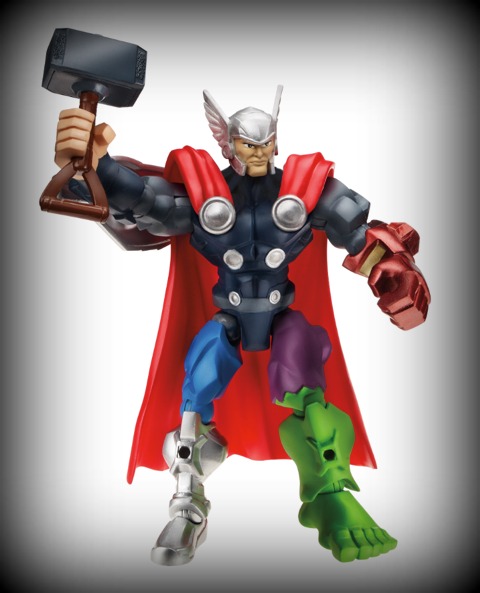 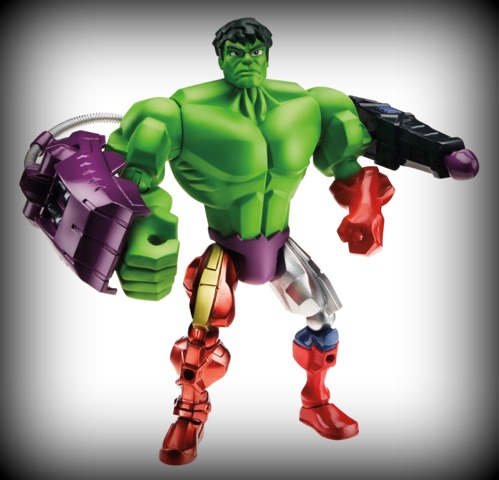 Hasbro challenged me to make my own Masher using the Thor and Captain America figures. So I put the two on my table and let them have at it. The results pretty much speak for themselves.

Let’s see what happens when The Mighty Thor happens to bump into my hero, Captain America… 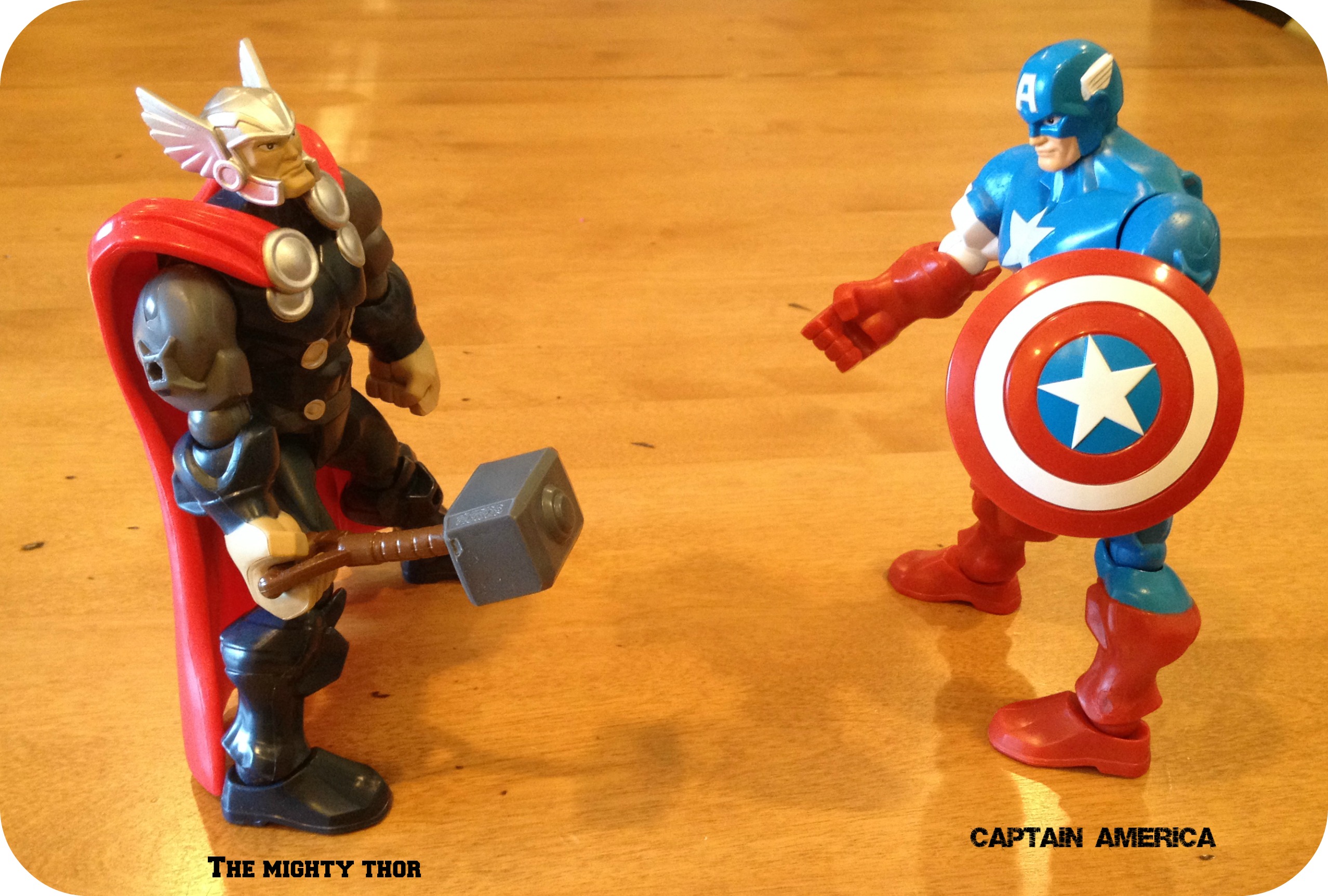 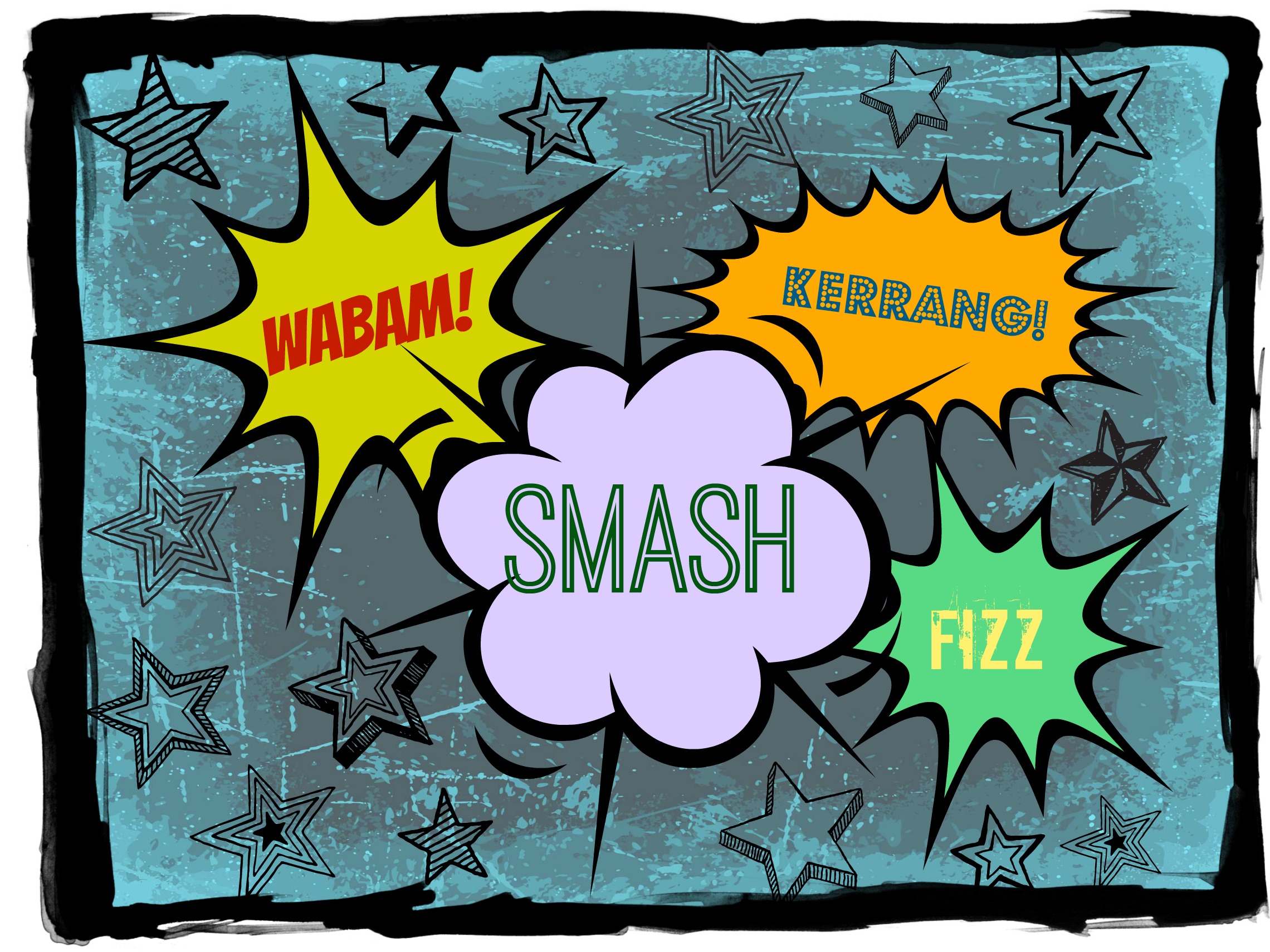 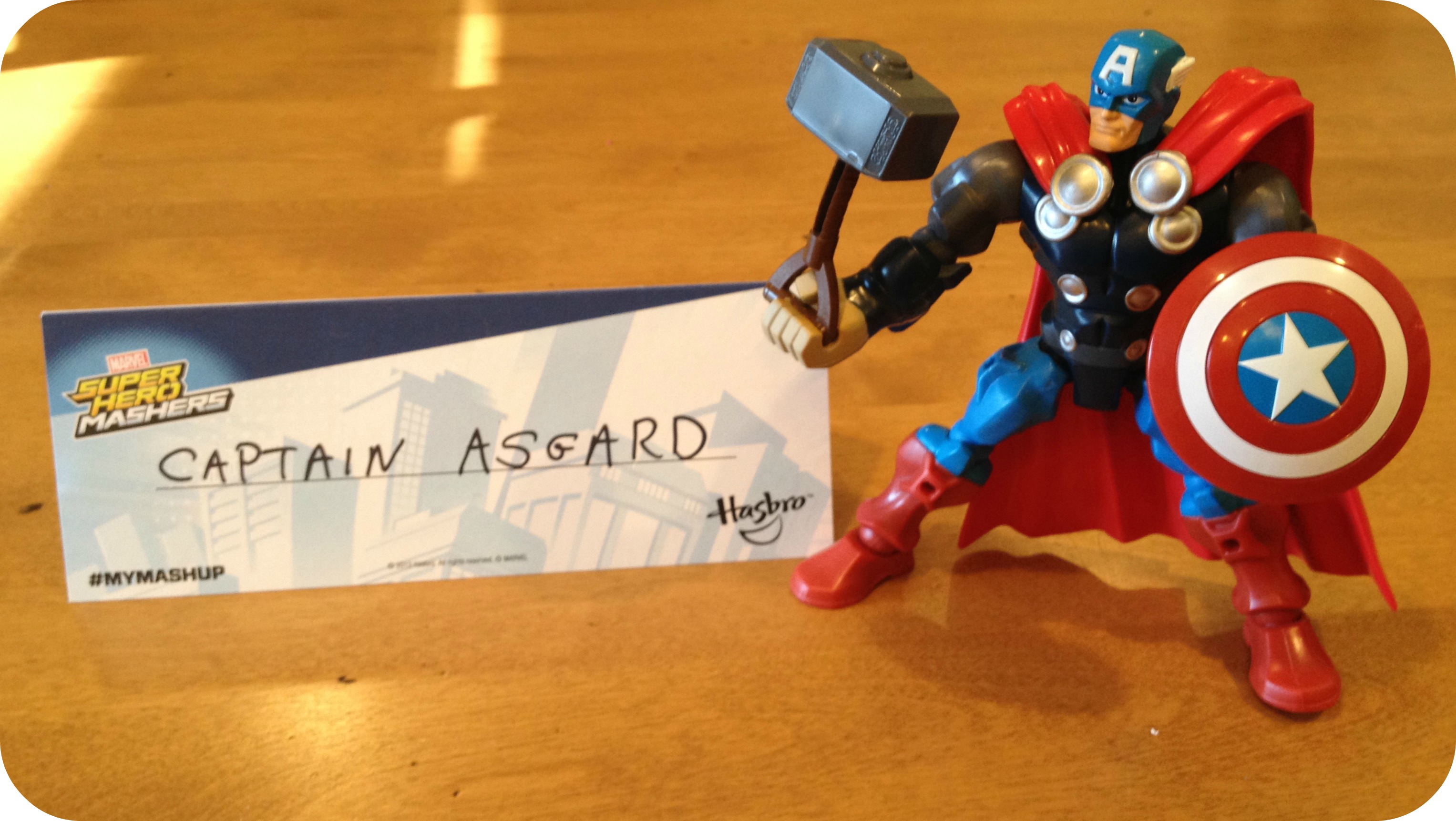 Why it’s the newest Marvel Masher… Captain Asgard! (Notice the “A” on his forehead? Pretty clever, right? Right?) Not just a refreshing new line from Hasbro, but a really fun and well put together toy line! Check out Hasbro’s Marvel Super Hero Mashers in stores now!