Next to Mario Kart, the Mario Party series of games probably earn the title of “most played” in our house. I remember getting Mario Party 8 when we first bought the Wii years ago, and seeing Jason’s eyes light up brighter than a Super Mario Star. Now Mario Party 10 is out for the Wii U and we even had a big ol’ Mario Pizza Party of our own to celebrate!

Since this game is such a big release and both my boys have played it a lot, they agreed to both write up a review. So you get two opinions in one great post! It’s interesting to see the differences in their thoughts not just based on the age difference, but their personal taste.

Game: Mario Party 10 for the Wii U

Mario Party 10 has 3 main modes: Mario Party, Bowser Party and amiibo Party.  In this review, I will give my thoughts on all of them. This is mostly the same gameplay as Mario Party 9 but there are some differences.  If you haven’t played Mario Party 9 yet or you forgot the mechanics of the game I’ll give you a rundown.

All players are in a car and take turns being the captain.  The captain gets any mini stars or mini ztars the car runs into.  The goal is to get as many mini stars as you can and whoever has the most at the end of the course wins.  There is 1 mini boss and 1 boss per course.

Sadly, the captain events from Mario Party 9 are gone.  There is a higher chance of playing a minigame but you could still only play the boss minigames if you are unlucky enough. There are only 5 boards, which is a step down from the 7 in Mario Party 9.  Out of all the minigames I played, most of them are fun to play.  Even though most of this mode is luck based, it can still be fun to play. In Bowser Party, a team of 4 players, Team Mario, has to try to escape Bowser and make it to the end.  Bowser’s goal is to deplete all of Team Mario’s Hearts.  Team Mario takes turns rolling dice blocks to try to get as far away from Bowser as they can.

After Team Mario goes, Bowser rolls his 4 dice blocks and tries to catch up with Team Mario and then play a Bowser minigame.  Every time someone gets hit in a Bowser minigame, they lose one heart.  One of the most annoying things about this mode is if Bowser’s roll doesn’t catch up to Team Mario, then he has the choice to re-roll.  Which seems pretty unfair to me!  This is the best mode out of all 3 modes. Amiibo Party has the same gameplay as the older Mario Party games,  except the boards are a small square.  There are 9 base boards and you can mix and match them to your liking.  9 amiibo figures are compatible with this game.  Every time a person with an amiibo does anything that is on a wheel, roll the dice, an event etc. they have to put the amiibo on the gamepad.

Mario Party 10 has 3 modes which are all fun and exciting to play. Just like Mario Party 9 but different – like different boards, mini games and obstacles on the board. Everyone’s in a cart (You can buy and select a cart at Toad’s room) and you take turns being the captain. The goal is to get the most mini stars. Overall in quality, gameplay and controls, it’s an awesome mode. In this mode, you can actually be Bowser vs Team Mario or everyone can be Team Mario and fight Bowser as a computer. Either way is amazing. After everyone goes, it’s Bowser’s turn. Normally, Bowser has 4 dice to roll but Bowser can lose dice or get dice. Bowser can also control the obstacles on the course and try to trick you which I find really cool. If Bowser catches you, then you play a Bowser mini game which for me is the best part. The only downfall is that there’s only 3 courses. In this mode, you use amiibos! What you do is create an amiibo player. Each amiibo has a different course but you can put up to 4 different courses in each of the fourths of the course. For example, half of the course could be Yoshi and the other half Mario. I find this awesome. The courses are small but you use the amiibos to roll the dice. Amiibo Party is not as good as the 2 other modes, but it is still fun to play.

Overall, its an awesome game with many cool and updated features from the last Mario Party and games before it. 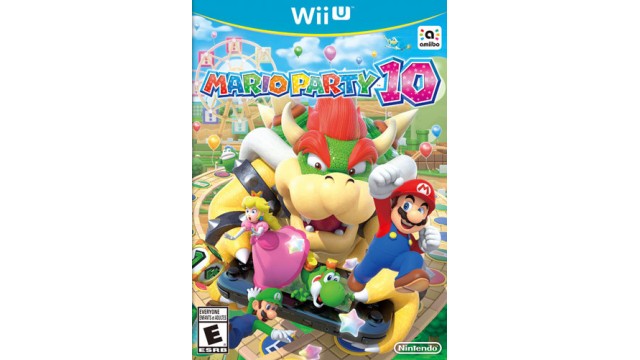