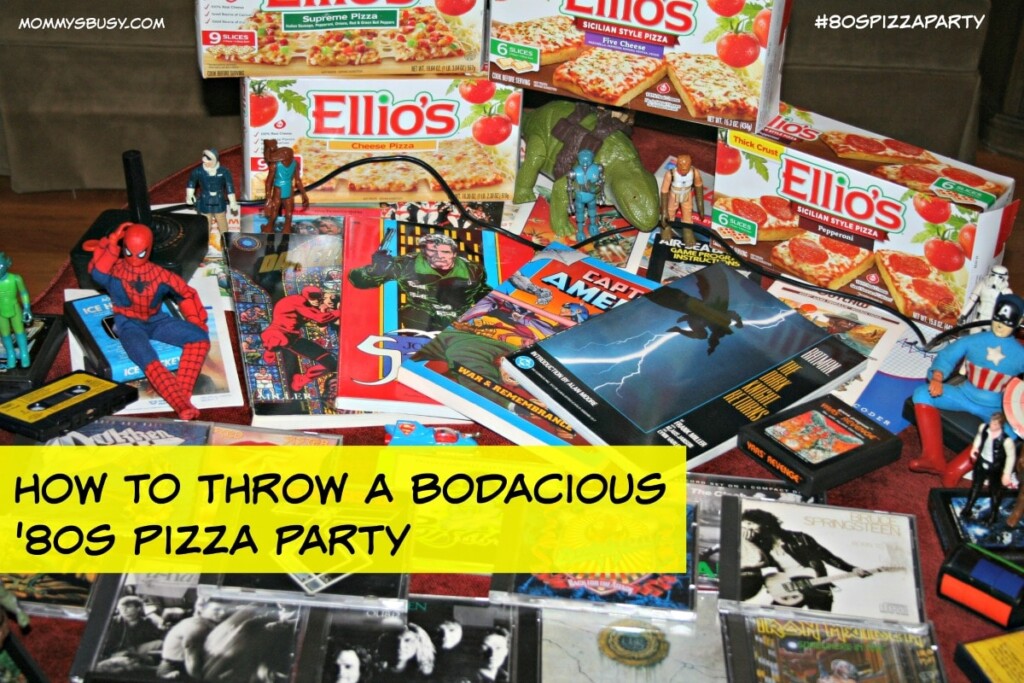 Wiser words have never been spoken on the Big Screen, and if you’re a fan of John Cusack or the ’80s, those two short sentences speak volumes. They come from 1989’s Say Anything, which cued a perfect ending to the perfect Bubble Gum Decade.

Yes, the ’80s. Atari. Bubble Yum. Cartoons. Star Wars. And the land of horrifically awful (yet I loved every single one) sitcoms. If I could freeze a decade in time, it’d be the ’80s.

The ’80s were my teen years. The end of Little League and the start of Junior High and ultimately High School. I must’ve mowed our lawn well over 100 times in those days, all while wearing out Twisted Sister’s Stay Hungry cassette on my Sony Walkman.

Looking at my entire life so far, it’s obvious the ’80s were when I was at my coolest. 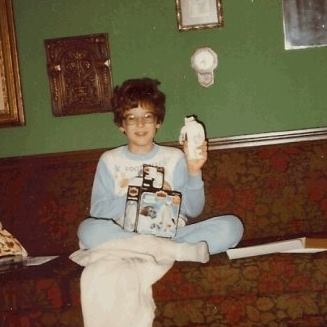 Okay, so I wasn’t quite a teen yet, but you can see a glimmer of coolness starting up in my eyes as I embrace my Kenner Star Wars Wampa toy. 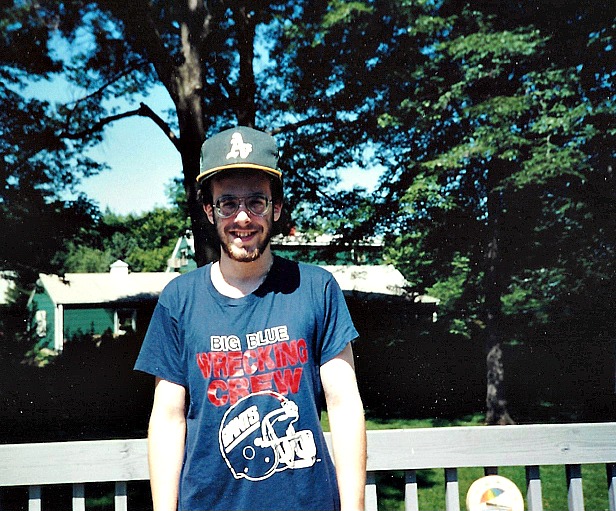 Fast forward a few years and here I am as a teenager in the ’80s, looking super cool with… uh… Hmm. I’m uh…. well, I’m uh starting to question exactly how cool I was back in the ’80s.

I do remember a good friend of mine practically laughing out loud as he pointed at my red E.T. sweatshirt. And I’ll never forget wearing my Batman logo T-shirt to gym in 8th grade. I was super pumped that Tim Burton’s Batman movie was finally getting made and had no qualms about telling my classmates. Yeah, comic book cool – that was me. Though I now wonder if the girls in my class were actually laughing at me in my Batman logo T-shirt, rather than laughing with me. Actually, I don’t think I was even laughing…

Okay, so maybe I wasn’t as cool as I thought I was back in the ’80s. I can be cool now, though, right? Nothing’s cooler than a cool dad, that’s what they tell me. And by “they,” I mean me.

My coolness factor may be in question, but one thing I am 100% certain of is that the ’80s were an amazing decade and the ultimate in coolness can be summed up in a perfectly cooked rectangle. I’m talking about Ellio’s Pizza!

I can’t count the number of times I’d come home from school to smell a slice of Ellio’s in the toaster oven just waiting for me! Mom always had the best snacks ready for us. And Ellio’s Pizza wasn’t just an ’80s thing; it followed me throughout my entire life. Even in college it made a regular appearance for both me and my girlfriend (now wife!).

And while episodes of The Facts of Life may not hold up as well as I remember from the ’80s, Ellio’s Pizza will not let you down! It’s still got the same great taste I remember from my youth. It still has that same amazing crust and perfectly rectangular shape. Plus, it’s loaded with 100% real cheese so you can feel good about chowing down.

To help celebrate the ’80s, I teamed up with the Life of Dad Crew and Ellio’s Pizza to throw the most amazing, pizzastalgic pizza party on the planet. We’re talking about an #80sPizzaParty, yo!

My kids may not have been lucky enough to be alive during the greatest decade of all time, but you’d have to be totally square not to appreciate the pure awesomeness and excellence that was the ’80s! So I fired up some Ellio’s Pizza (it’s so easy! Just pop a few slices in the toaster oven or regular oven at 425 degrees and wait about 12 minutes. Yeah, waiting is the hardest part.), and got the party started! 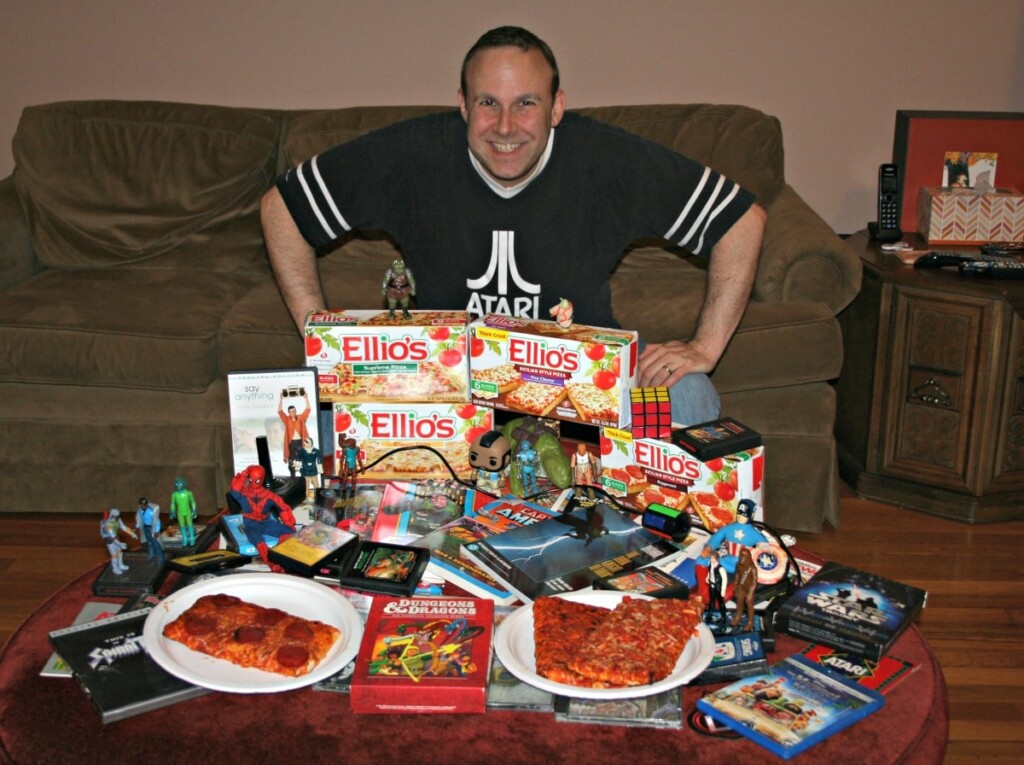 I dug up all my favorites from the ’80s. We’re talking movies like Star Wars, Spinal Tap and The Muppet Movie. Comic books like John Byrne’s run on Captain America, Frank Miller’s Daredevil “Born Again” Saga and one of the all-time greats, Miller’s The Dark Knight. Of course there were loads of Atari 2600 cartridges, Star Wars figures, Mego Super-Heroes and even a Rubik’s Cube. Not to mention my original Weird Al in 3-D cassette featuring his breakout hit “Eat It.”

And of course, there’s Ellio’s. 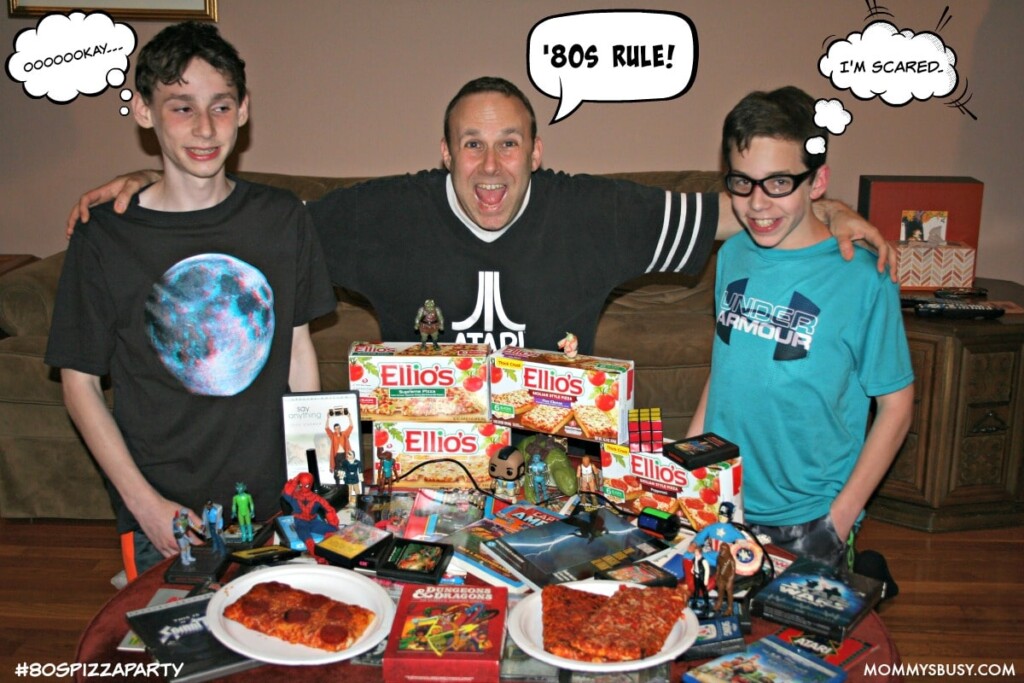 I grabbed the kids and dove right into festivities! While I’m pretty sure they already thought everything from the ’80s was cool, I brought out some Ellio’s Pizza to ensure they stuck around for awhile. 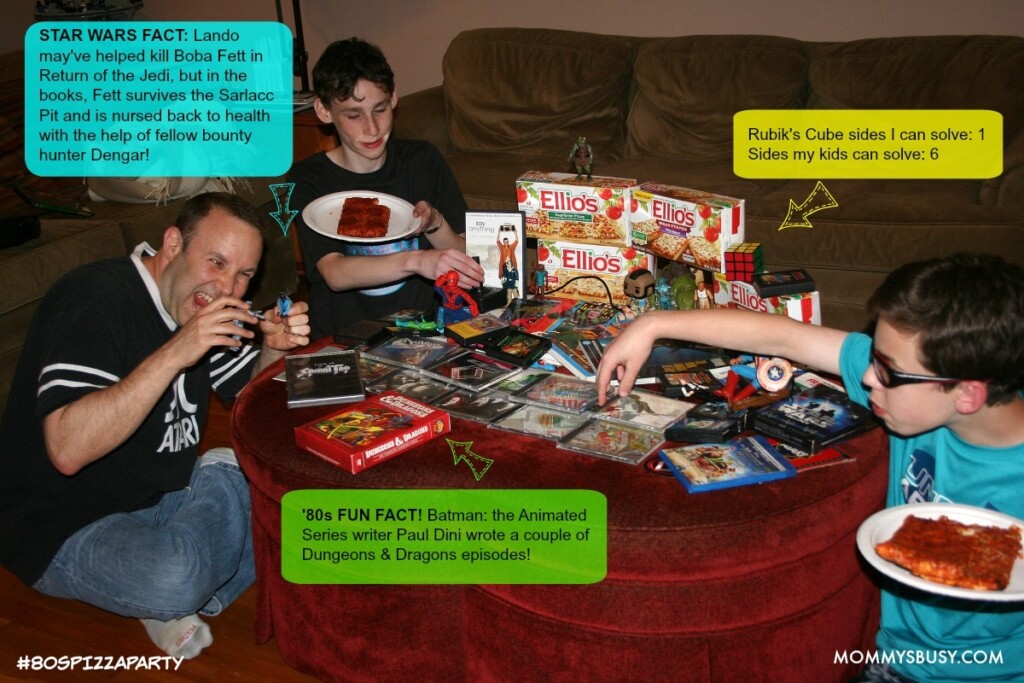 Like I said, I love the ’80s. My boys were fascinated by a number of the items I had put out. Ryan specifically was curious with my CDs, asking me how you open the case and how do you play these things. Jason, of course, went straight for the Atari 2600 joystick.

Of course, once Ryan had a slice of Ellio’s Cheese Pizza, his interest in the ’80s vanished as quickly as Vanilla Ice’s career. (Too soon?) 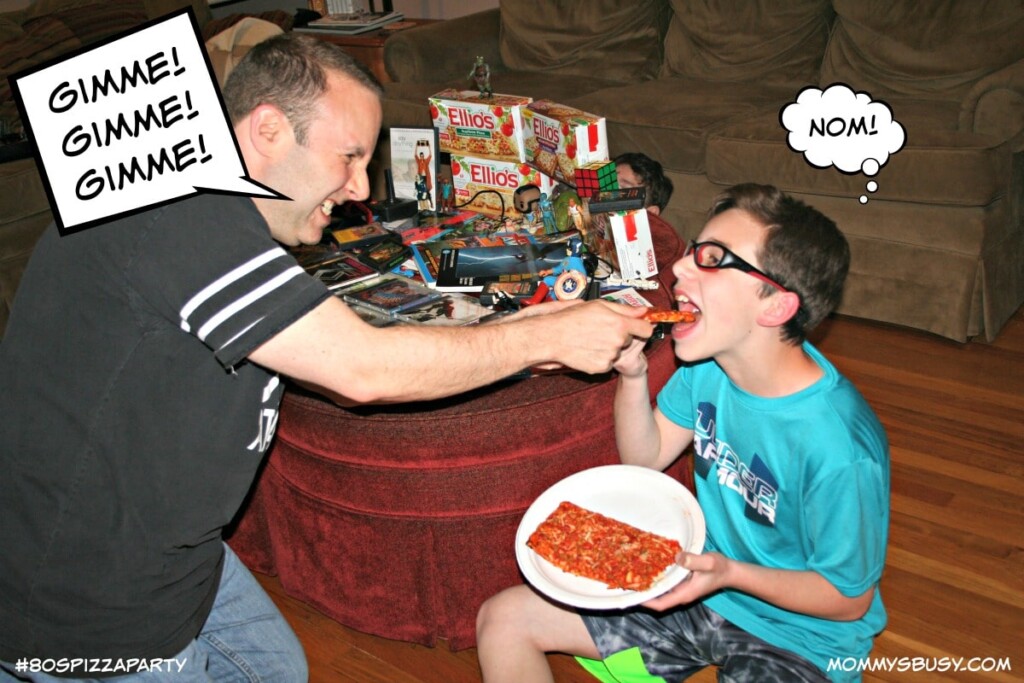 What? I was hungry and Ryan was on his like fifth slice already! I mean, uh, Ellio’s Pizza (like the ’80s itself), is all about sharing! 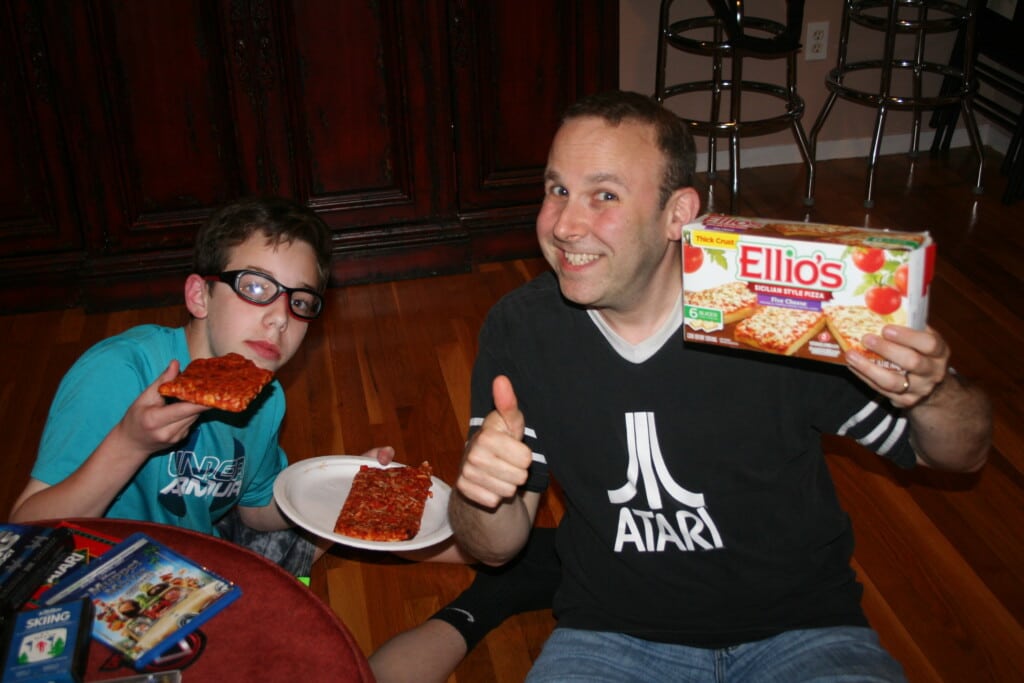 Yep, thankfully we had plenty of Ellio’s Pizza to go round. 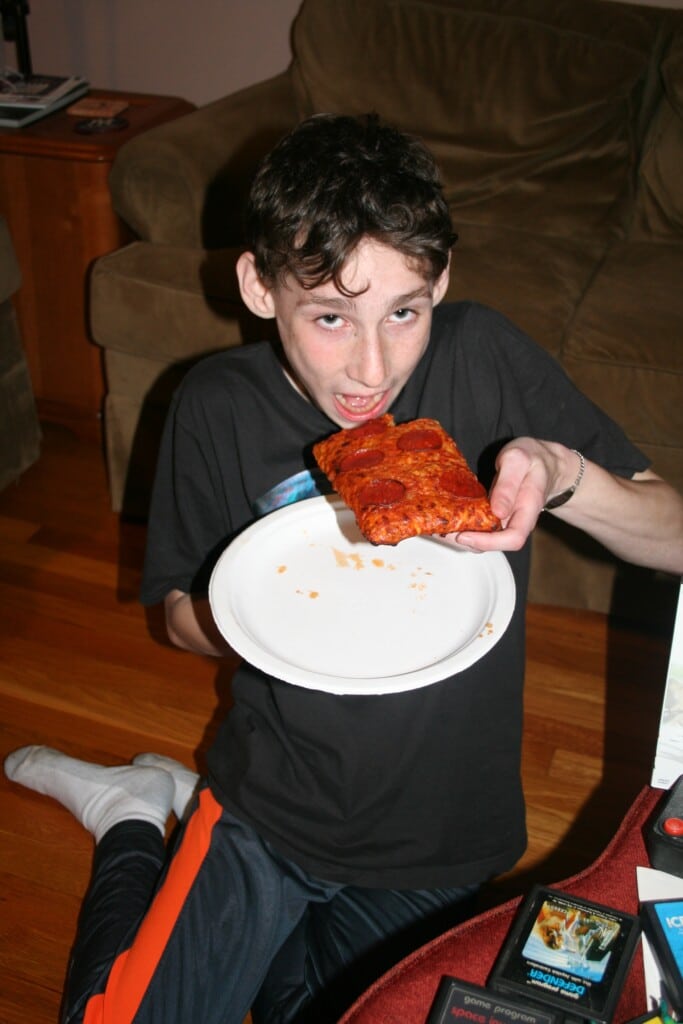 Like this slice of Ellio’s Pepperoni Pizza! Seriously, I think I could eat my body weight in this stuff. 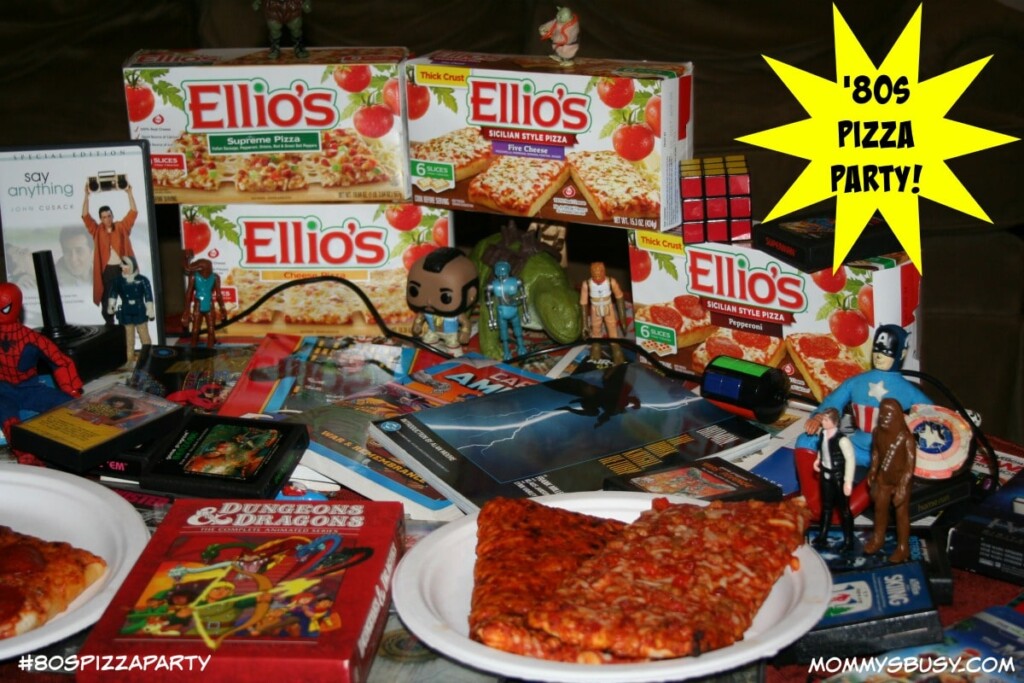 Here’s a closer look at some of my favorite items, characters and properties from the ’80s. See that Mego Captain America figure on the right? He was my most favoritest growing up. I played with him so much that the sticker on his shield kept peeling off, as if you couldn’t tell. But so did the star on his chest. So much so, in fact, that my mom sewed the star on so it’d stop falling off. 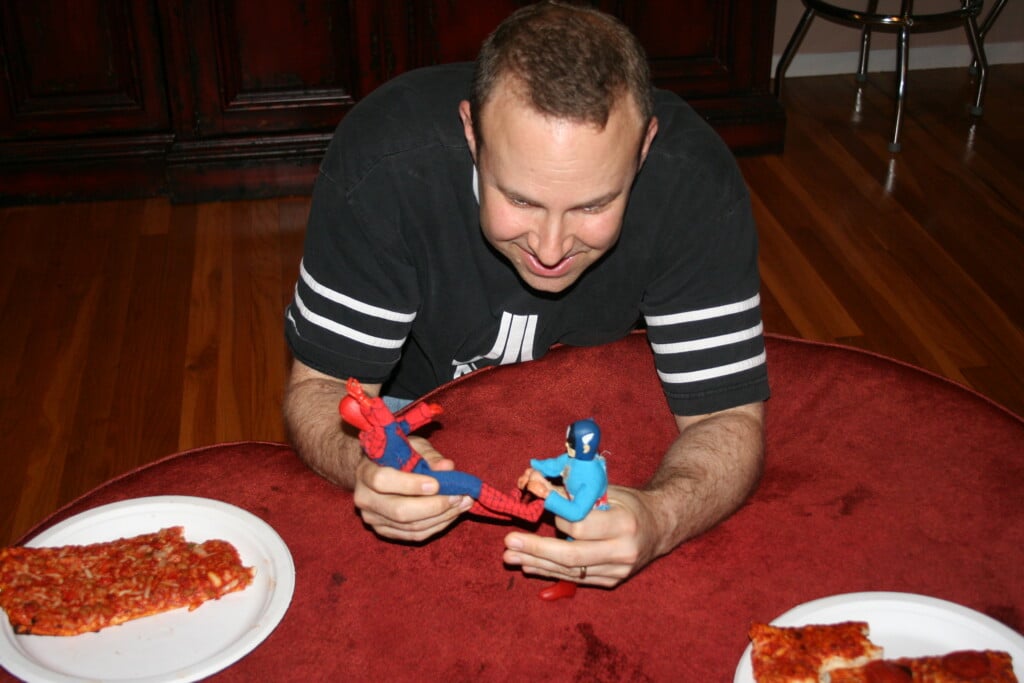 Maybe it was the sweet cheesy smell of Ellio’s but I suddenly had to re-enact the classic Mego Spidey versus Mego Captain America battle of yesteryear! I don’t need to tell you who won, do I? 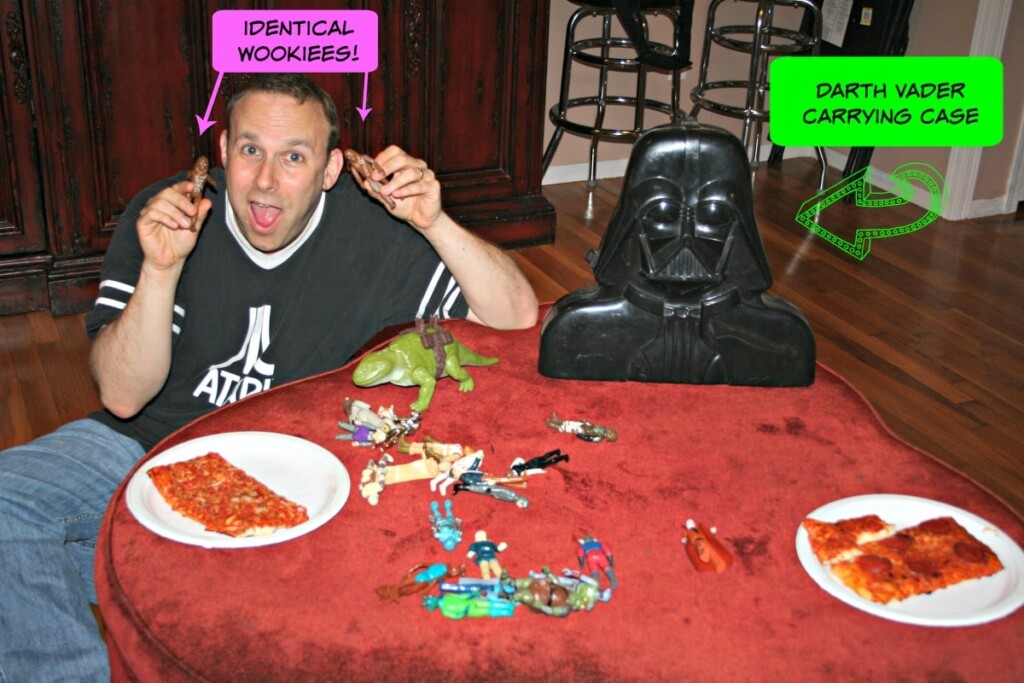 Yes I still have my original Star Wars action figures from the ’80s. Yes I took them all out of their original packaging. Yes, I still play with them. Wanna make something of it? 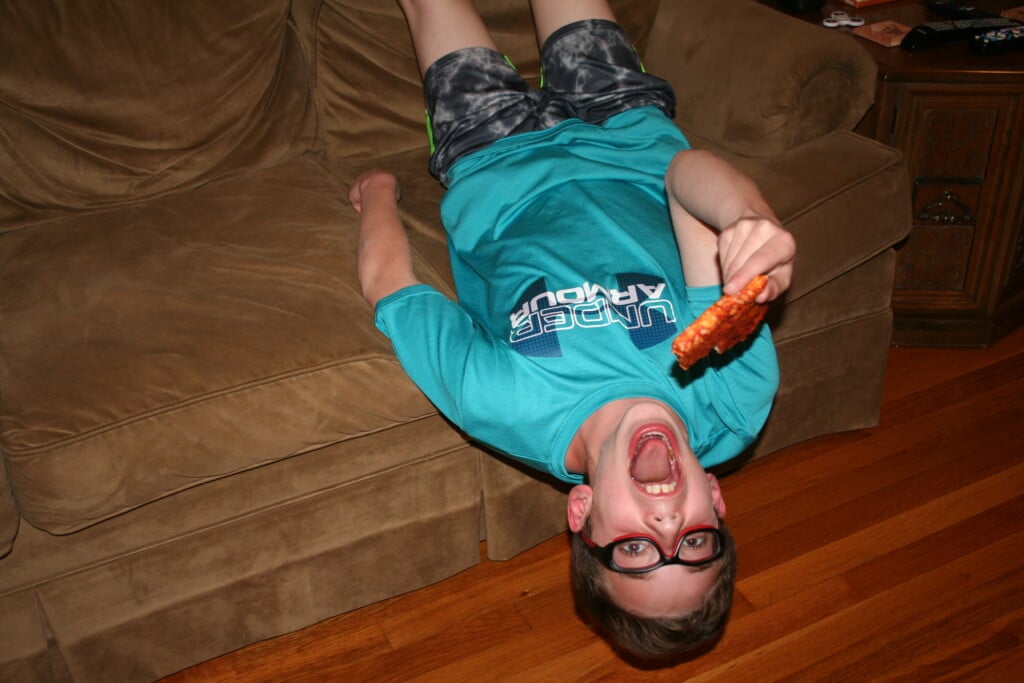 Ryan proves that even upside-down, the 1980s are a blast! 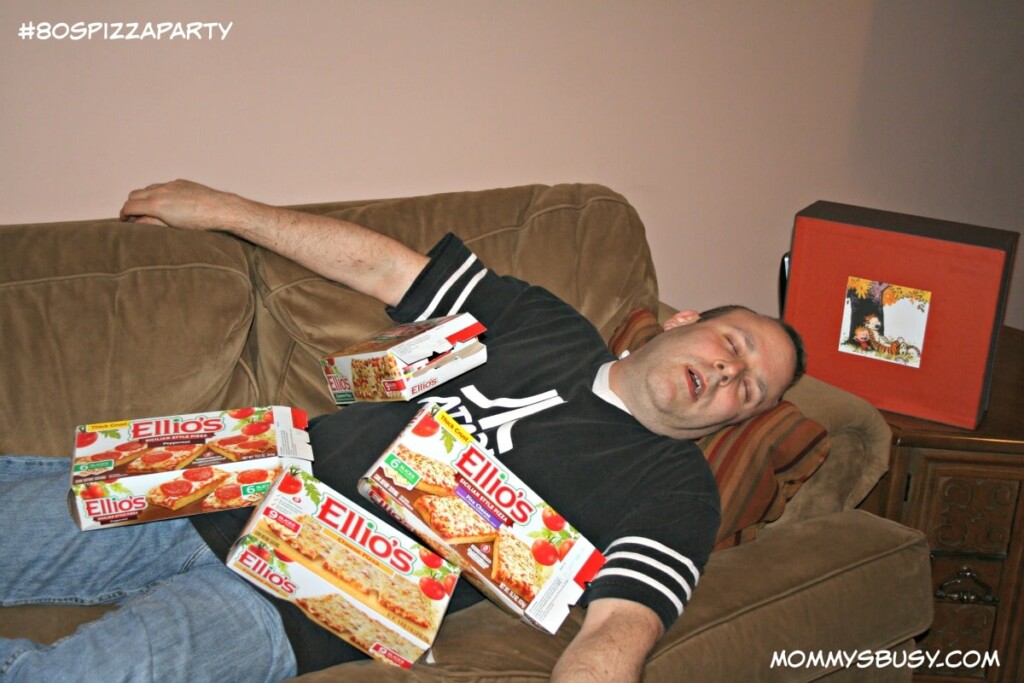 Like all good things (including the ’80s), my ’80s Pizza Party came to an end. I had a blast reliving the past and just about the only difference in enjoying all this pizzastalgic awesomeness nowadays is that I might be a little bit more tired than I used to be. Nothing a quick cat nap can’t cure, though.

Be sure to use the store locator over on the Ellio’s Pizza website to get yourself stocked up with the best, most totally tubular frozen pizza on the planet!

What did you love about the ’80s?
#80sPizzaParty

This is a sponsored post on behalf of Dr. Oetker USA LLC. I received compensation for this post; however, all opinions stated are my own.