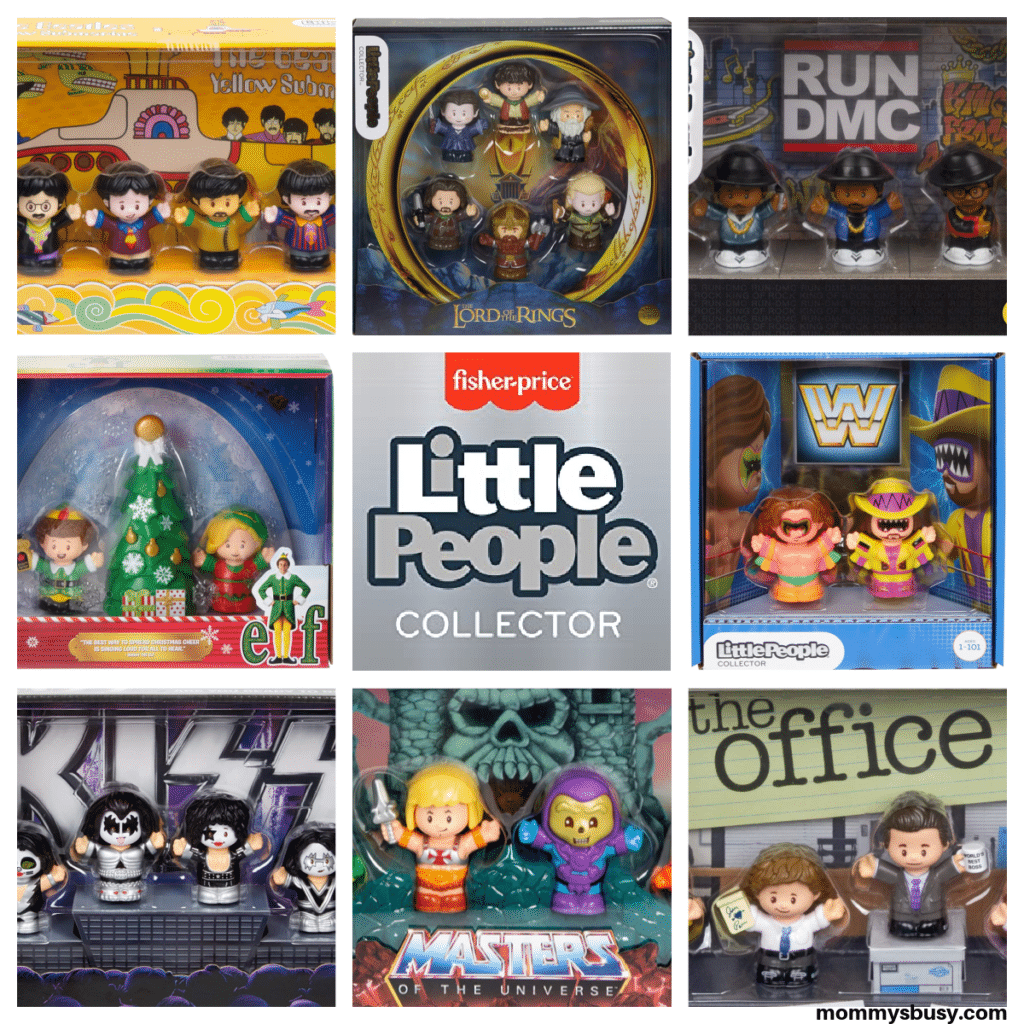 If you grew up in the ’70s, chances are some of your best friends were Fisher Price Little People.

Fisher-Price really hit it out of the ballpark with its line of little wooden characters that did super exciting things like drive a car or go to school.

Seriously, I must’ve spent a few thousand hours as a kid driving cars up and down the ramp of the Little People Service Center. There was even an elevator and a car lift to do repairs! And if I remember correctly, there was this cool “ding” when you pretended to fill the car up with gas. 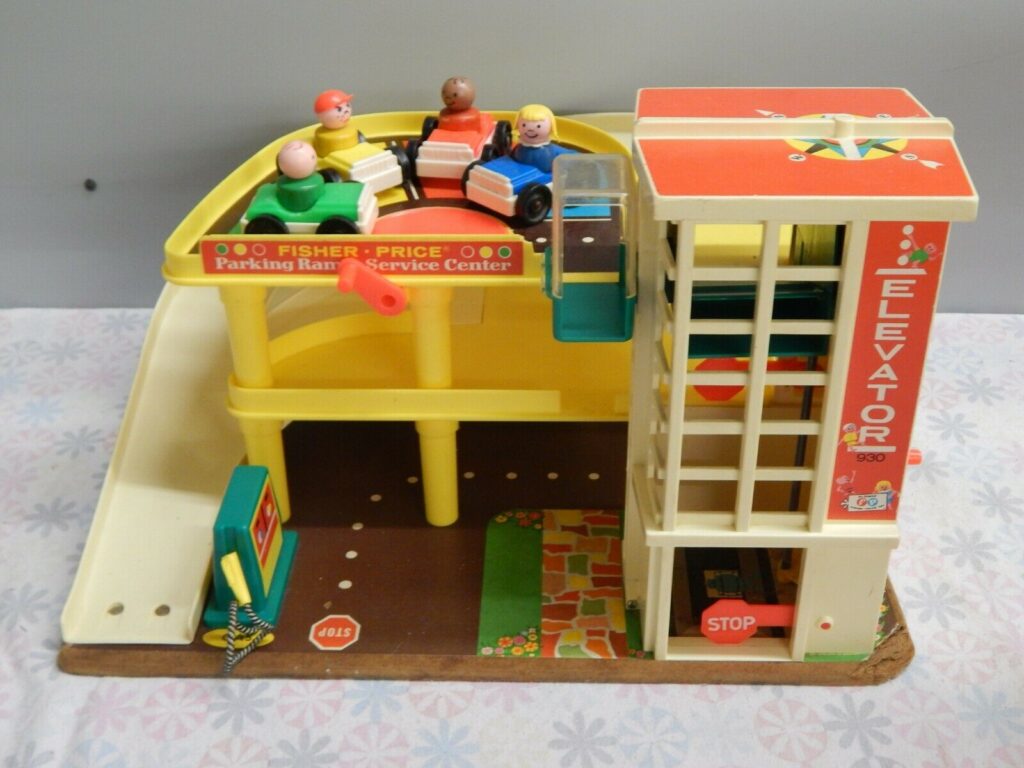 My sister had the all-time coolest set ever: The Fisher Price Little People Castle! This bad boy was huge and had all sorts of fun rooms and hidden nooks. A trap door on top would drop your figures into the dungeon below and it even came with a huge pink dragon for our fearless knight to fight.

Why, they even made a Sesame Street set, complete with Fisher-Price versions of Big Bird, Grover, Mr. Hooper and yes even a little Oscar the Grouch in his trademark garbage can.

I absolutely loved my Little People and apparently so did the rest of the world, as the line expanded and continued over the years.

What started as simple rounded wooden characters evolved into a full-fledged marketing assault complete with a cartoon that my kids loved (and which still haunts me to this day).

Somewhere along the lines, the Little People changed though. Not just from original wooden characters to plastic ones (which might have to do with something silly like lead paint), but in size and shape. These guys practically doubled in size and… gasp…. now had arms! That’s a pretty massive change if you ask me.

Yes, Fisher-Price most definitely knows its audience and 1000% nailed it with Little People. They know kids and know what kids want.

But get this… Fisher-Price also knows what adults want. They want that love of childhood (nostalgia!) mixed with a current love of pop culture.

Fair warning: You may want to have a credit card handy…. 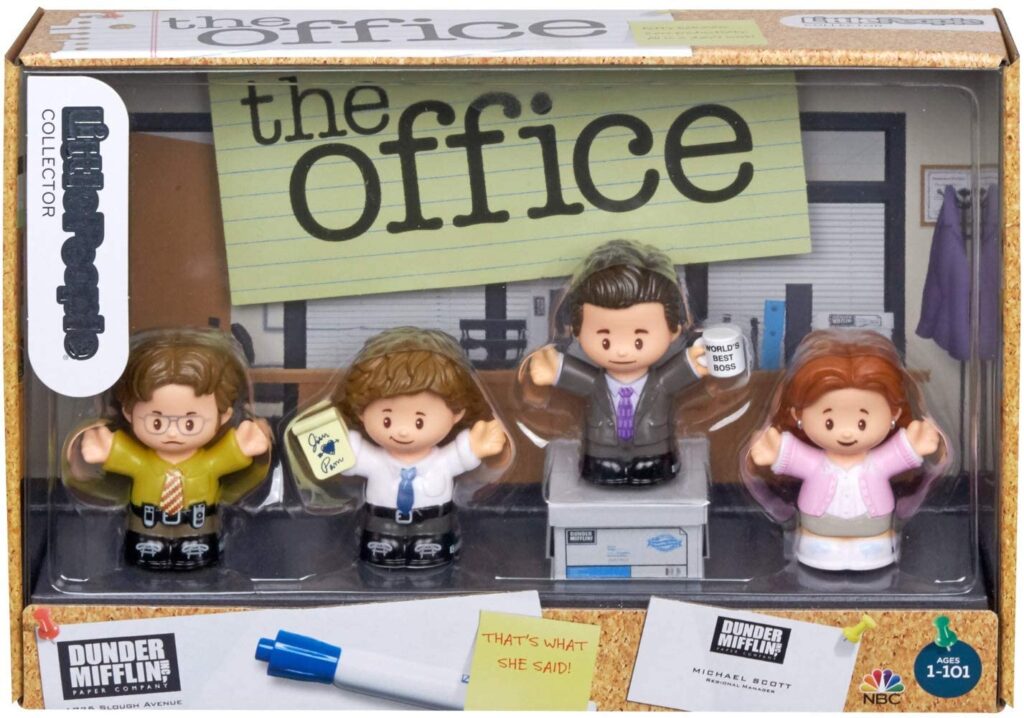 This set certainly does Dunder Mifflin proud with four of our favorite characters from the hit TV show The Office. Dwight, Jim, Michael and Pam look happier than ever (well, Dwight really never looks happy to be honest) as they’re just waiting to brighten up your office.

HE-MAN & THE MASTERS OF THE UNIVERSE 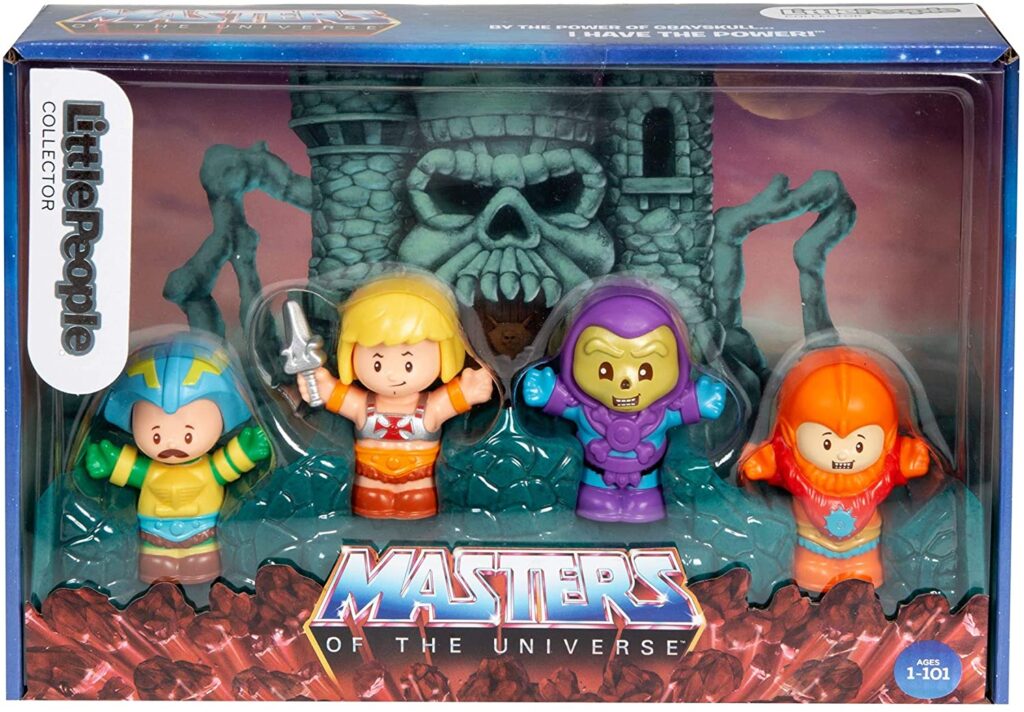 I don’t think I’ve ever seen a more ferocious Skeletor! How can you not laugh with joy at the explosion of ridiculous cuteness here? I mean just look how tiny He-Man’s sword is! And look, Beast Man just wants a big ol’ hug. You’ll get He-Man, Man-At-Arms, Skeletor and Beast Man all in their classic character looks, complete with a killer Castle Greyskull background.

Buy the Little People Masters of the Universe 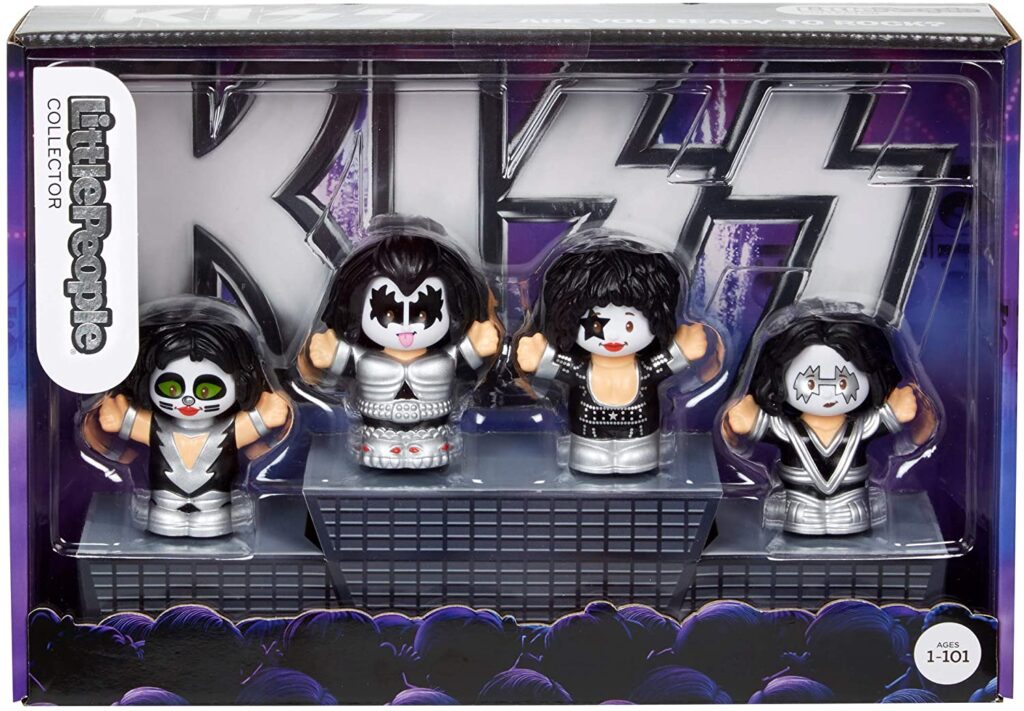 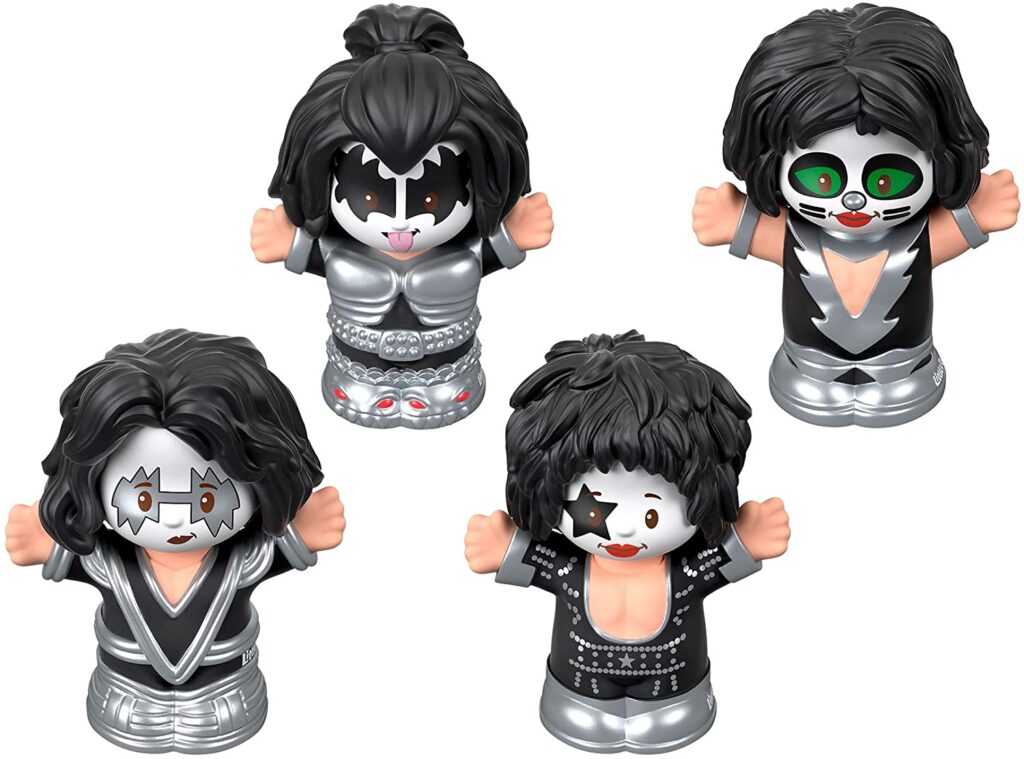 I’ll admit I was never really that into KISS (I’m much more of a Twisted Sister fan), but I did love their outfits. And this Collector Set does not let you down! Who better to fill out a Little People KISS set than The Starchild, The Demon, The Catman, and The Spaceman? You better believe these li’l guys are ready to rock and roll all night and cuddle all day. 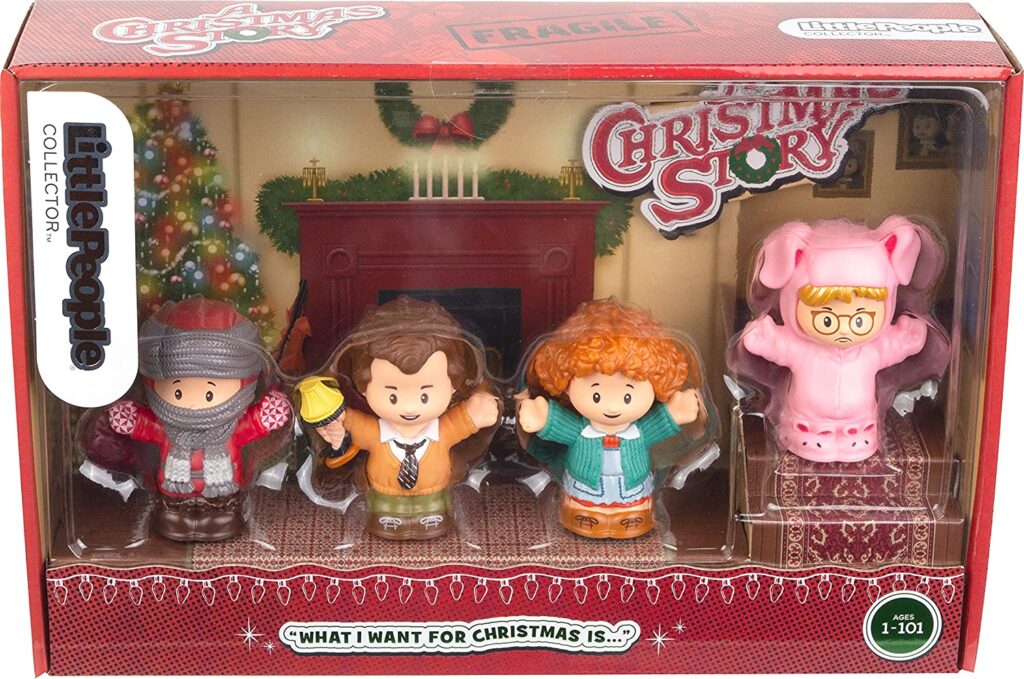 Some people say it’s not truly Christmas until It’s a Wonderful Life airs on TV. I’m in the other camp where you need to grab some chips, sit on the couch and watch a marathon of A Christmas Story. Only then are you filled with the full holiday spirit. While you don’t get a Red Ryder BB Gun with this set, you do get the soap-feeding Mrs. Parker (soap not included, sadly), the leg lamp-loving Mr. Parker, the tongue-sticking Randy, and Ralphie in his infamous pink bunny outfit. 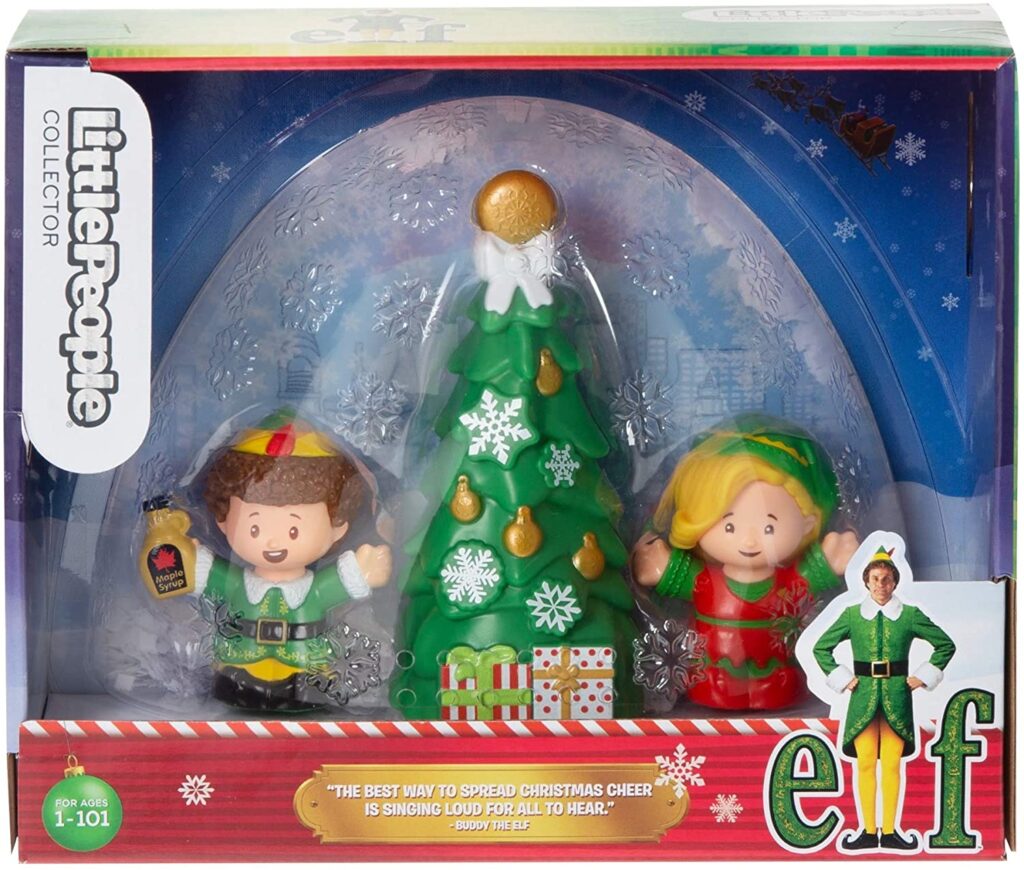 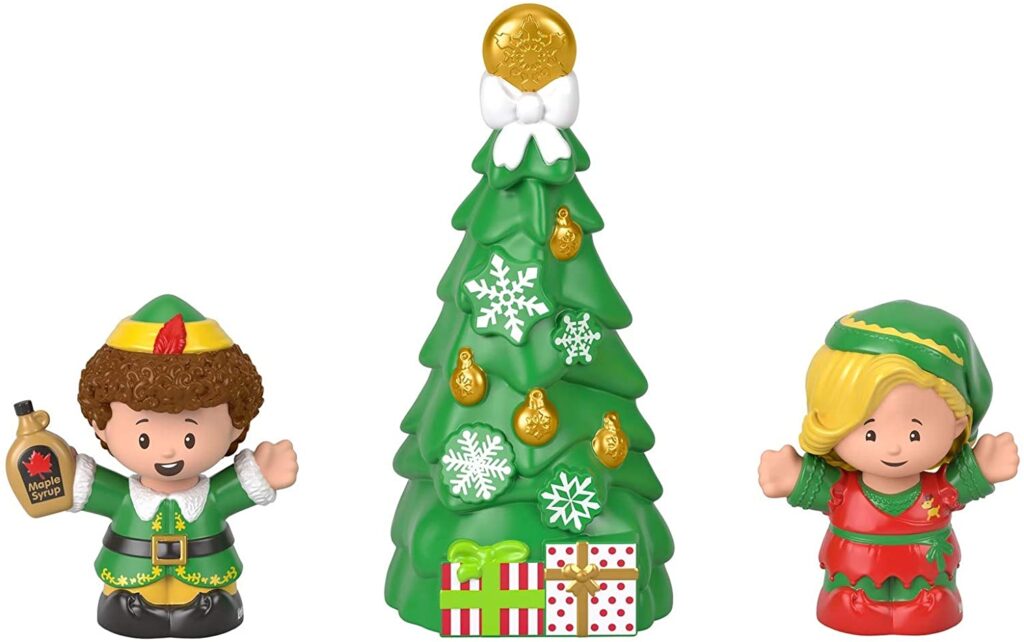 “The best way to spread Christmas cheer is singing loud for all to hear.” Yep, that’s Buddy the Elf for ya. Another classic Christmas movie, this set comes with Little People versions of the syrup-loving Buddy the Elf, his bestest friend Jovie, and a decorated Christmas tree.

LORD OF THE RINGS 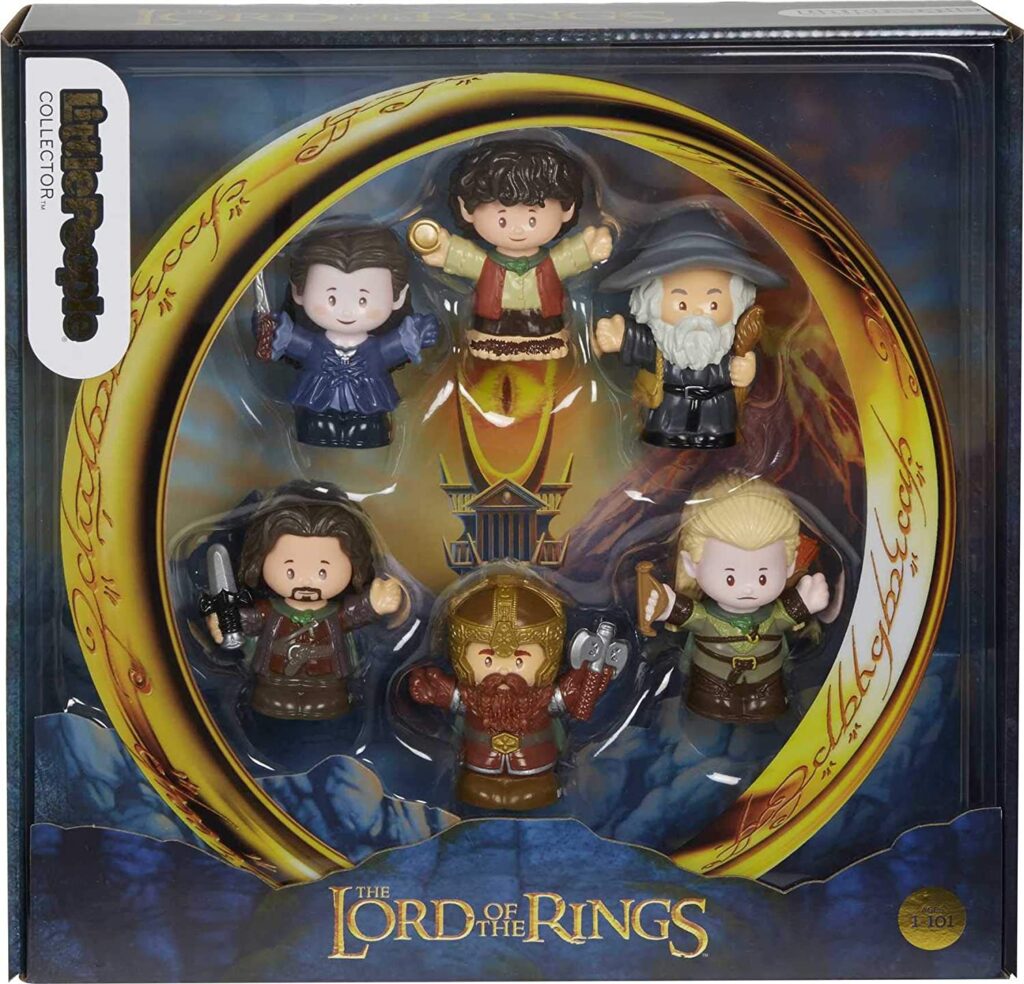 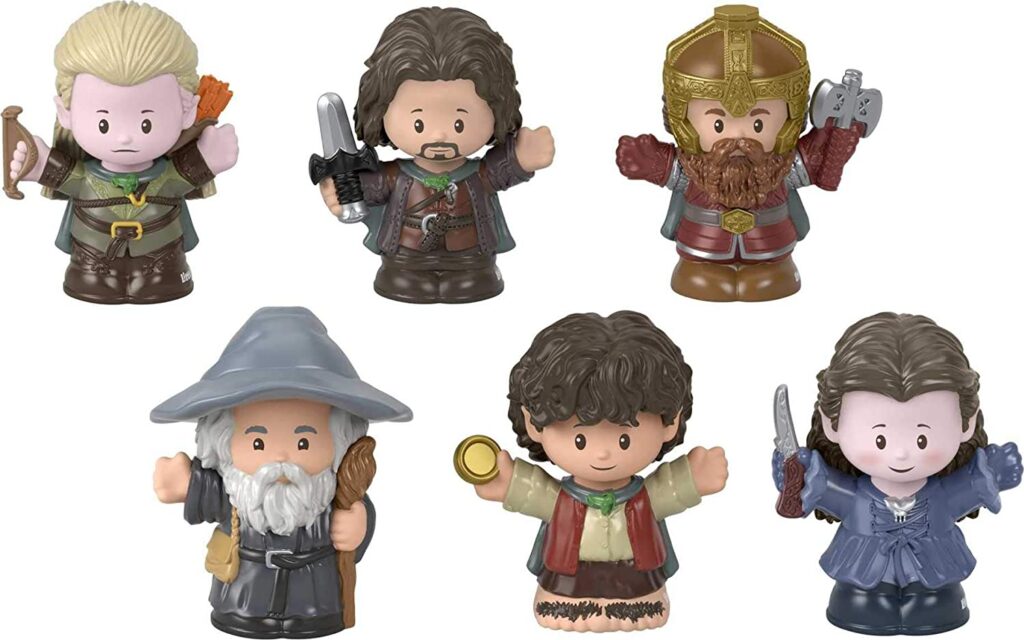 One toy to rule them all! The biggest Little People Collector Set so far, Fisher-Price brings Tolkien’s trilogy to mini toy life. With approximately 987 main characters to choose from, it’s tough to cut that list down to a mere six. I would’ve loved to have have seen Samwise and Gollum in here for sure. But you still get a great set that includes Frodo Baggins, Gandalf the Grey, Aragorn, Lady Arwen, Gimli (and his axe) and Legolas.

Buy the Little People Lord of the Rings set 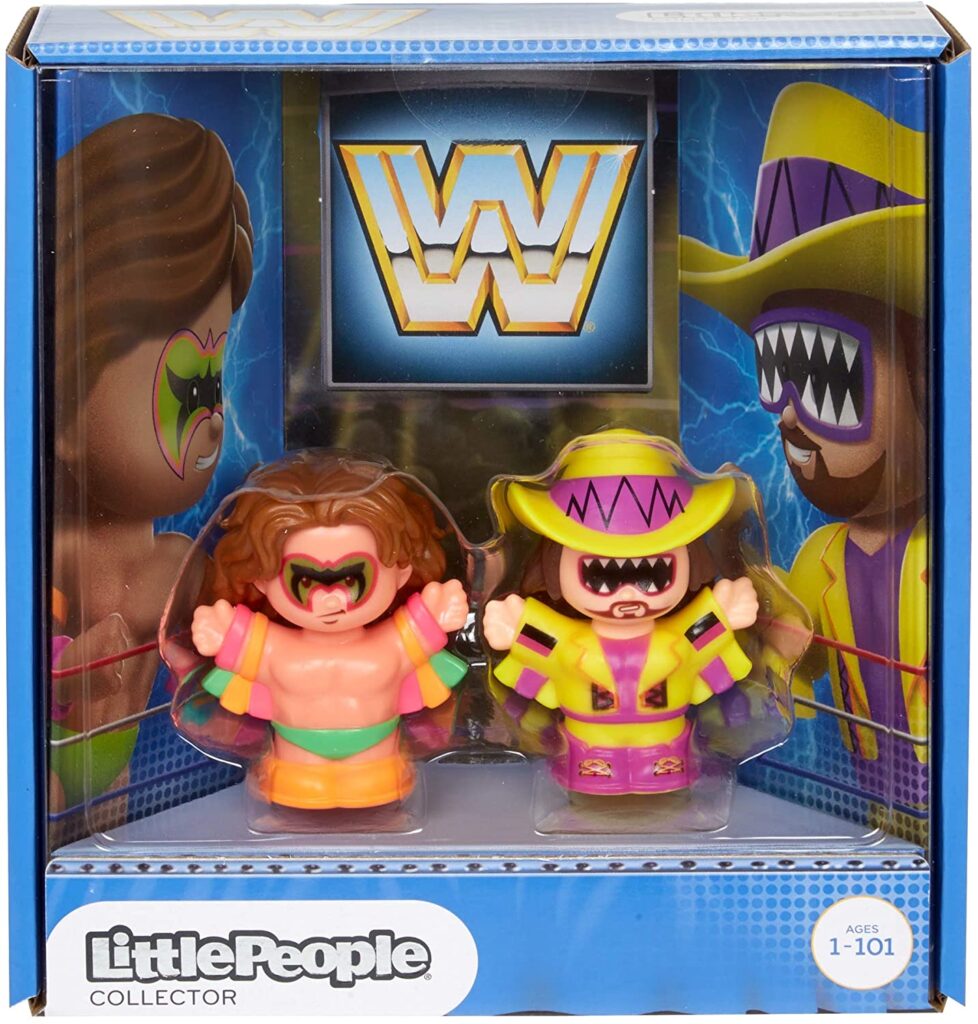 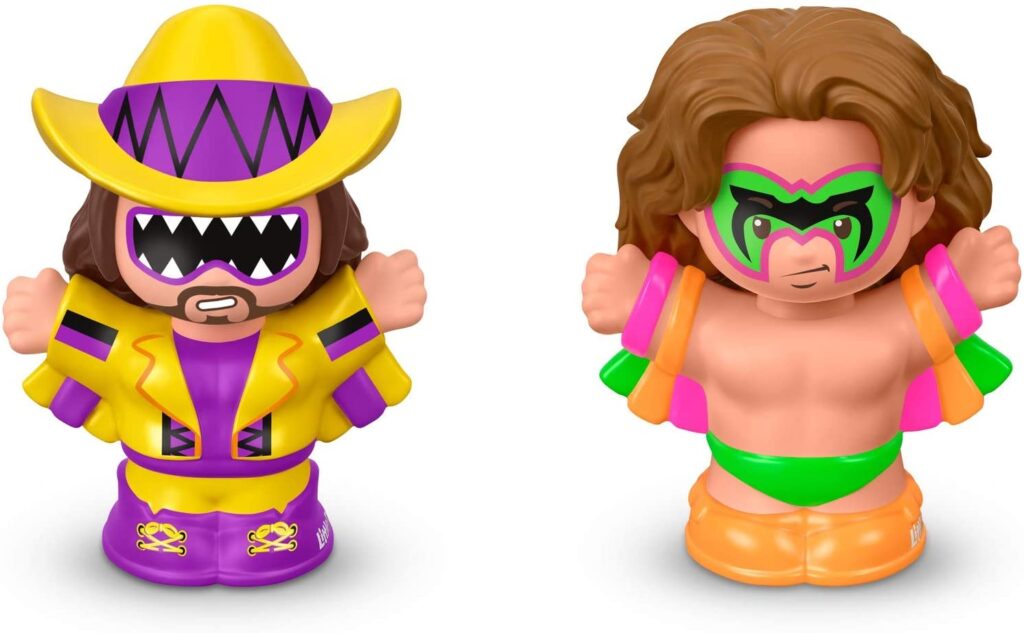 Ohhhh, yeah! Two of the WWE’s most colorful and exuberant characters get the Little People treatment here. WWE legends Randy “Macho Man” Savage and the Ultimate Warrior are sure to brighten up any bookshelf or desk in your home. 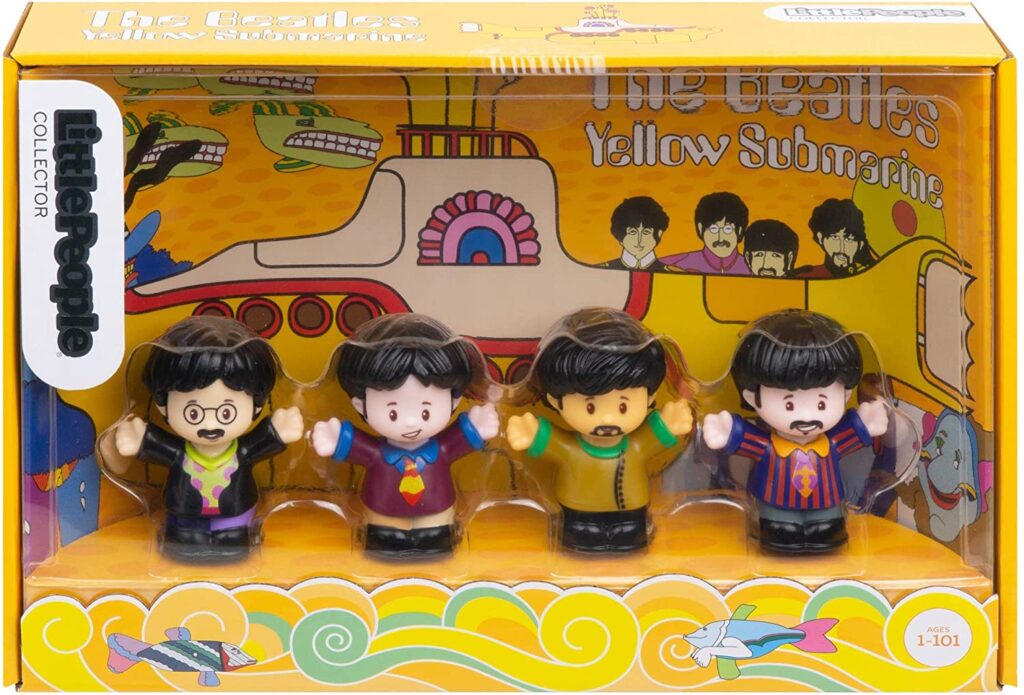 The iconic animated style of the Beatles meets the 3″ stylings from Fisher-Price. You’ll get all four of the Beatles in their Yellow Submarine glory: John Lennon, Paul McCartney, George Harrison and Ringo Starr. Sadly, no Blue Meanies to be found. 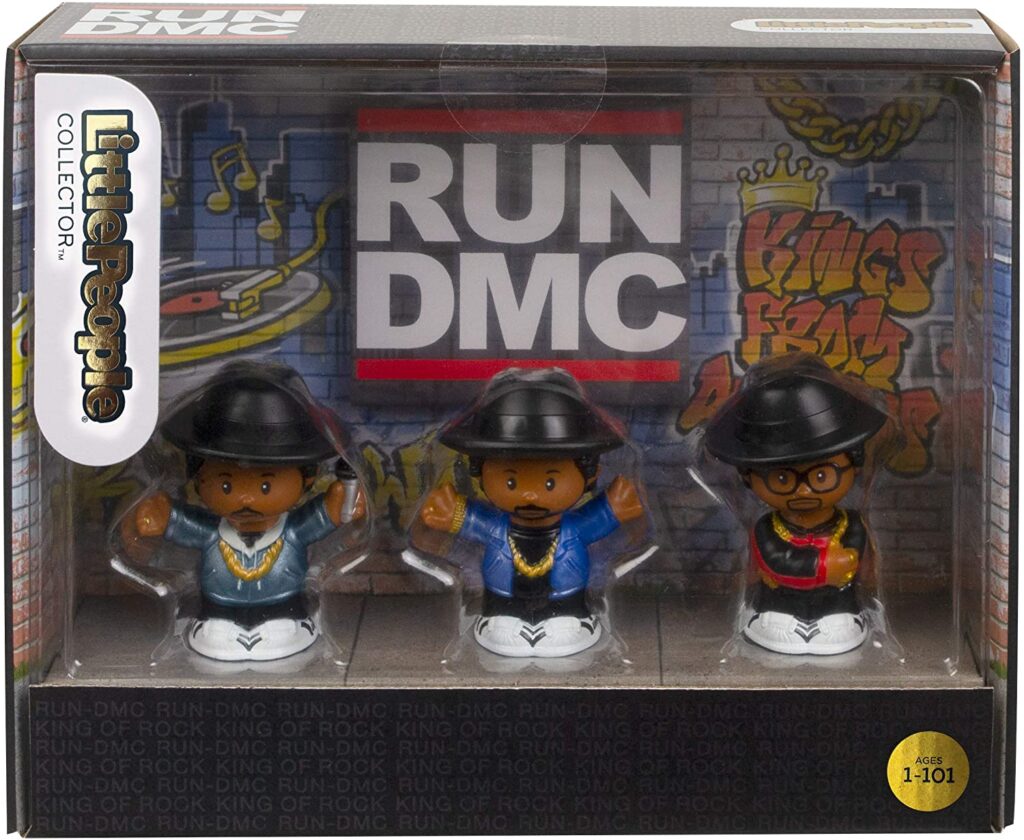 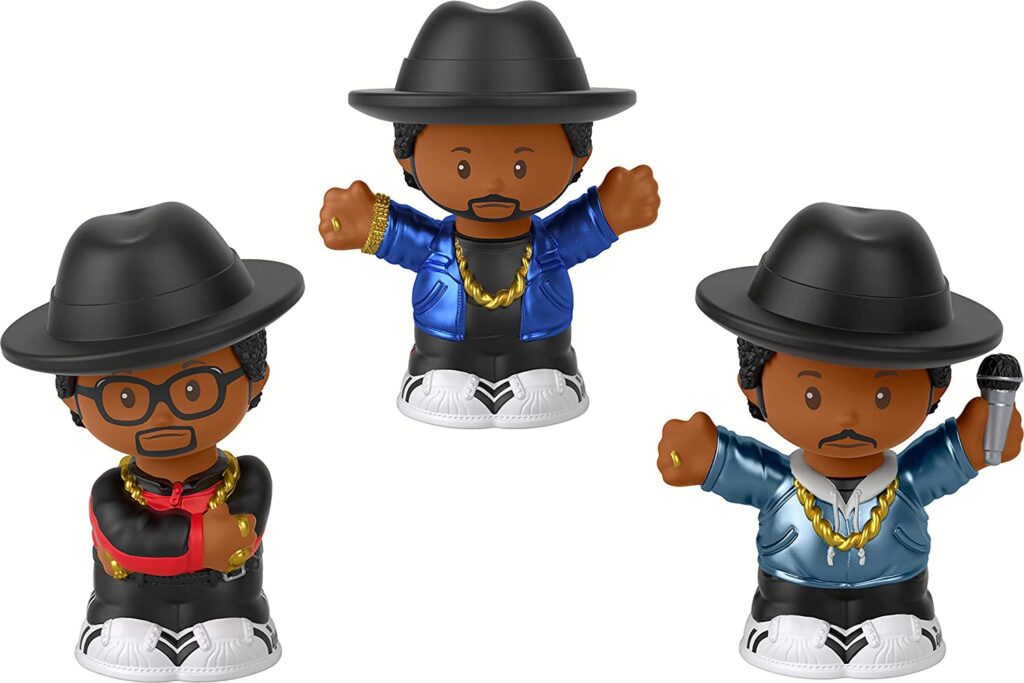 Fisher-Price walks its way over to the trio that helped rejuvenate Aerosmith’s career with a Run DMC collector set. You’ll get a stage-like background in the box, along with figures portraying the popular group’s members Joseph “Run” Simmons, Jason “Jam Master Jay” Mizell, and Darryl “D.M.C.” McDaniels. 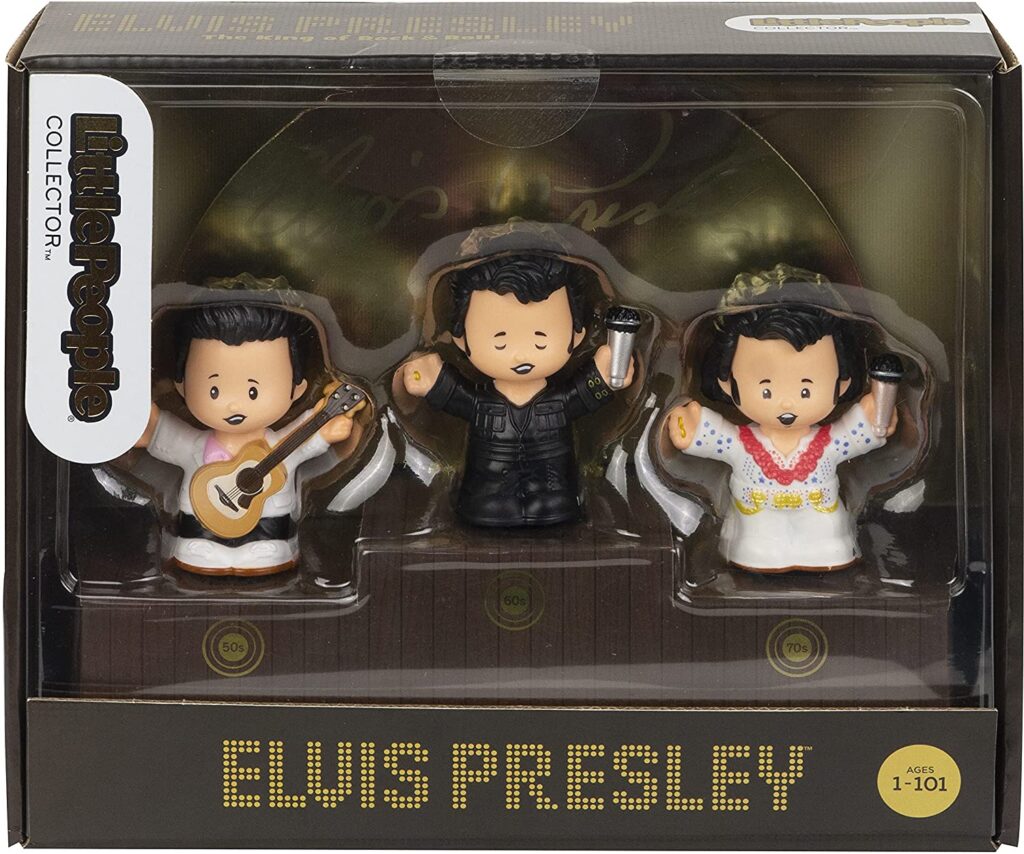 The celebrated King of Rock and Roll gets his own Little People set complete with three different versions spanning his career from the 1950s through the 1970s. Blue suede shoes not included.

Which Little People Collector set is your favorite?