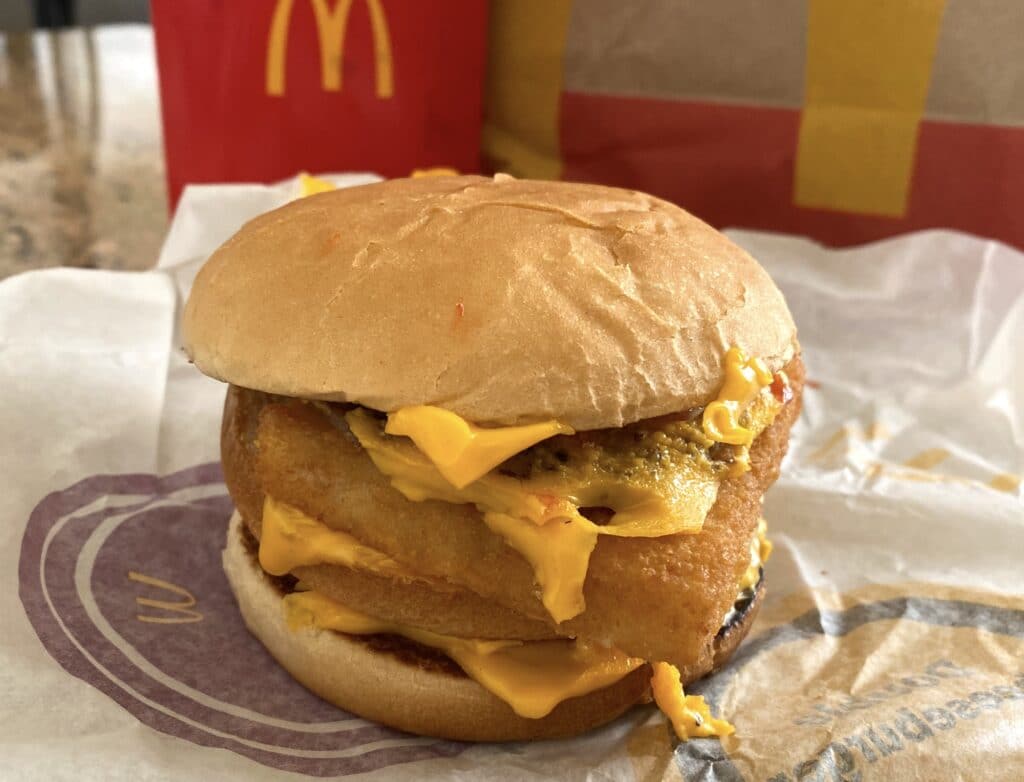 So McDonald’s has a new menu hacks section on its app. With it, you can order super secret, off-menu items like the Surf + Turf, the Crunchy Double, a Hash Brown McMuffin, and the Land, Air & Sea.

Clearly I had to accept the challenge of trying at least one of them.

I love me a good weird food combo. Pretzels and cream cheese on white bread? Yes, please. Pizza and pineapple? Yep, I’m on the “delicious!” side. Simply put, if I like two different foods, there’s a good chance I’ll like them together.

While the Quarter Pounder with Cheese is my go-to at McDonald’s, I’m also a sucker for the Filet O Fish. Not only is it just fun to say, but it’s downright delicious. That slice of cheese mixed with a fried fish and the tartar sauce. Leave the calorie-counter at the door and just enjoy.

I instantly knew that I needed to try the McDonald’s Surf + Turf. One part Filet O Fish meets one part Double Cheeseburger.

Now a real Surf and Turf at a sit-down restaurant generally consists of a killer steak and a delectable lobster tail. It’s also usually one of the more expensive items on the menu. They do come on the same plate, but you don’t usually eat them in the same bite.

And that’s where Mickey D’s throws caution to the wind. The Surf + Turf takes the best of the sea (that’s the Surf) and the best of the land (that’d be the Turf), and creates the ultimate fast food mashup.

But to be fair, I knew I had to try this unholy beast of a sandwich. So I downloaded the McDonald’s app and ordered up the Surf + Turf menu hack.

I’ll be honest, I’ve never used the McDonald’s app before. So I considered this a test on multiple levels!

Pretty easy to setup, I found my way to the Menu Hacks section, clicked on the Surf plus Turf icon and placed my order.

Now, when you order a McDonald’s Menu Hack, you’re not ordering a brand-new, all-inclusive sandwich. It basically breaks it out on your order with the individual items. So essentially I was ordering a Filet O Fish and a Double Cheeseburger.

Okay, no sweat. Easy to order up the meal. So I did. And then headed to my local McDonald’s. 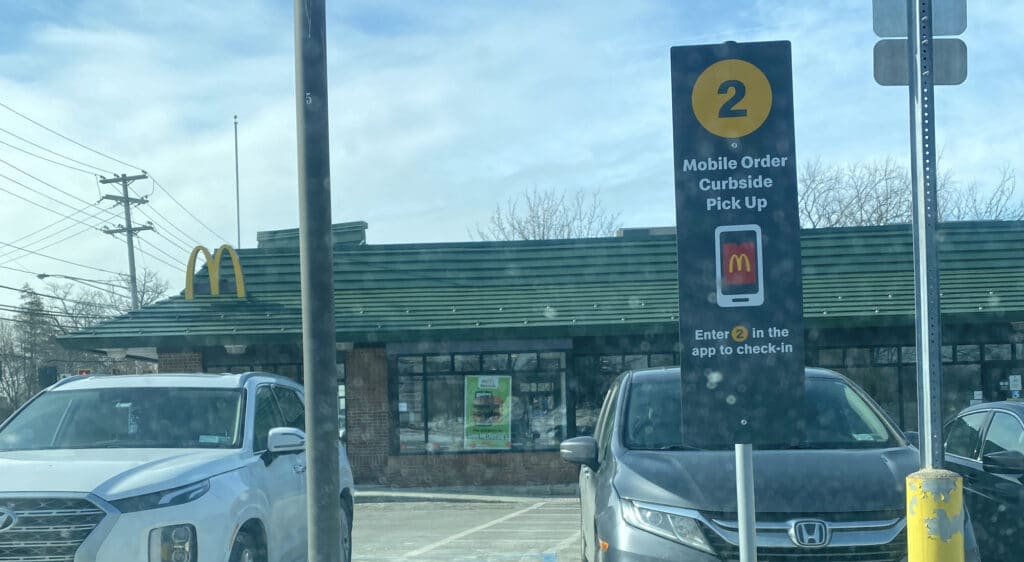 I pulled into the #2 Mobile Order Curbside Pick Up spot. I found it a little odd that it was in the middle of the parking lot and not right next to the restaurant. But hey, it’s the employees that’ll be walking my order out, not me.

I waited just two or three minutes and then the McDonald’s employee brought out the Holy Grail of Hacks. Or perhaps… Pandora’s Box of Burgers? 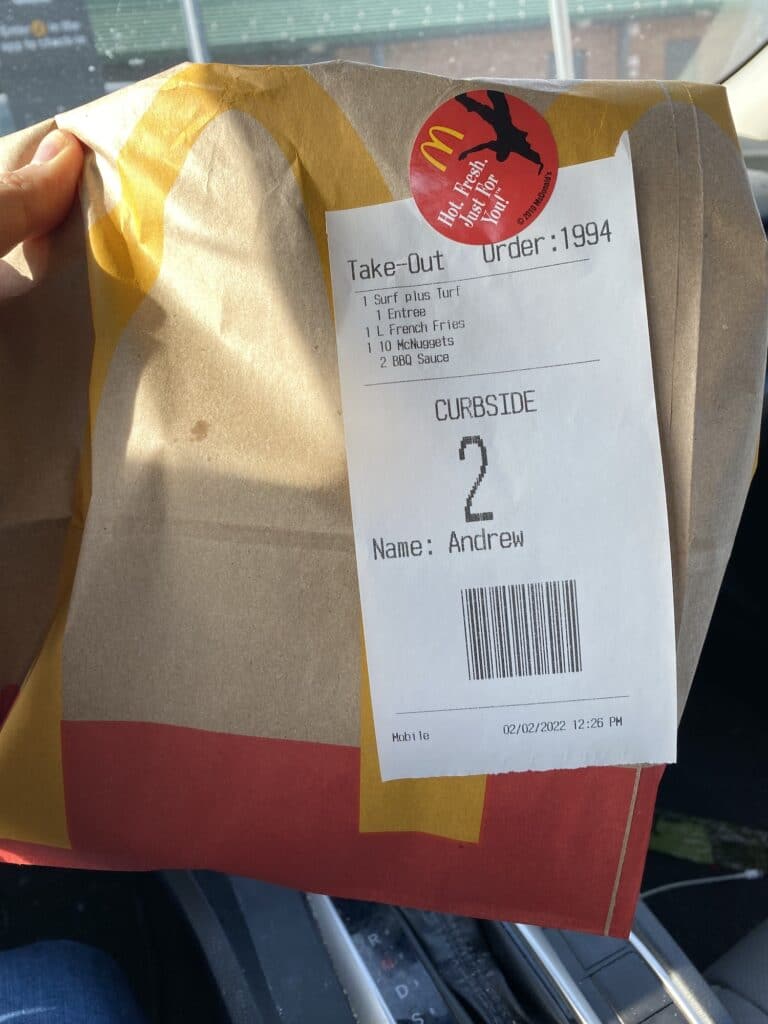 With my Surf + Turf in hand, I headed home for the ultimate taste test.

Behold… the McDonald’s Surf and Turf

So there I was. At home. Safe from prying eyes. I honestly didn’t know what to expect.

Would I love it?

Would I hate it?

Would I puke my guts out all over the floor? (Hence the reason for trying this at home.)

There’s only one way to find out, so I opened the bag and… 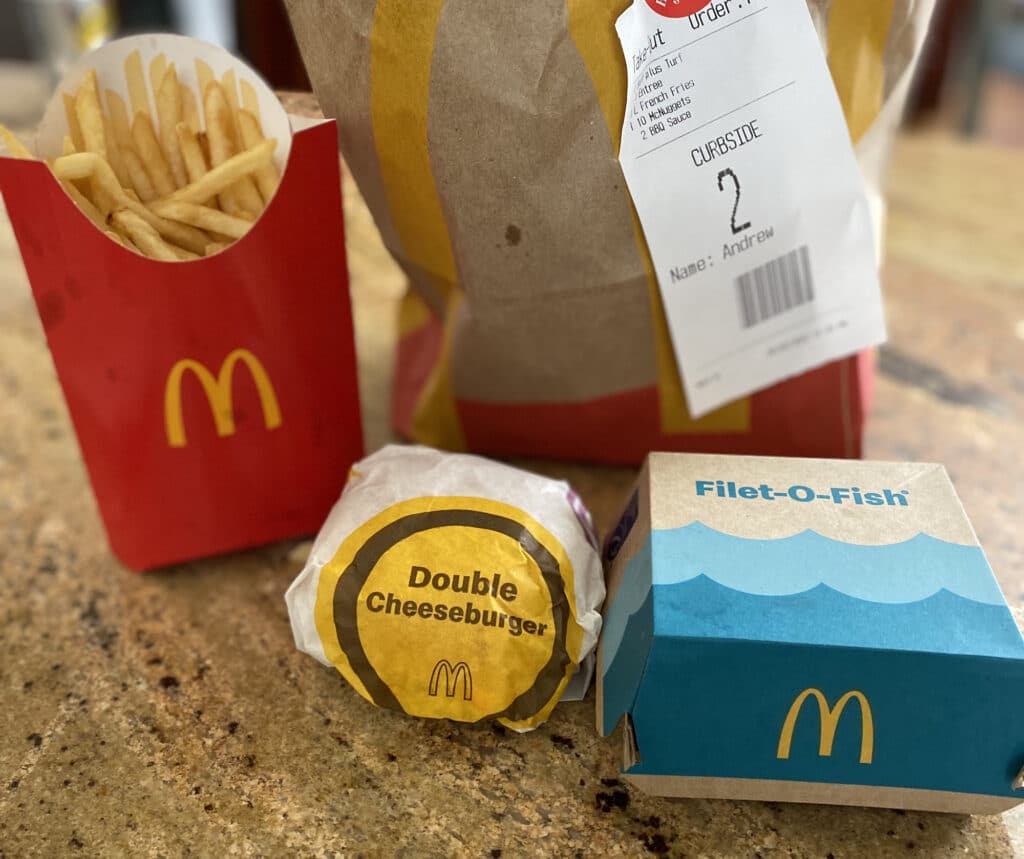 …and I immediately screamed BULL!

I expected one super cool box with a shark surfing and eating a cheeseburger or something. Y’know, to symbolize the Surf and Turf.

What I got was a Filet O Fish and a Double Cheeseburger. That’s it.

I essentially ordered my own value meal. What I thought was a brand-new menu choice was nothing more than a DIY lunch kit.

Granted, looking back on the McDonald’s app and site (but really, who has time for all that reading when you’re hungry), it does kind of mention that you make it yourself.

Okay. So I need to make this all by myself. No biggie. There’s two sandwiches and I’m sure some sort of instructions in the bag, right? 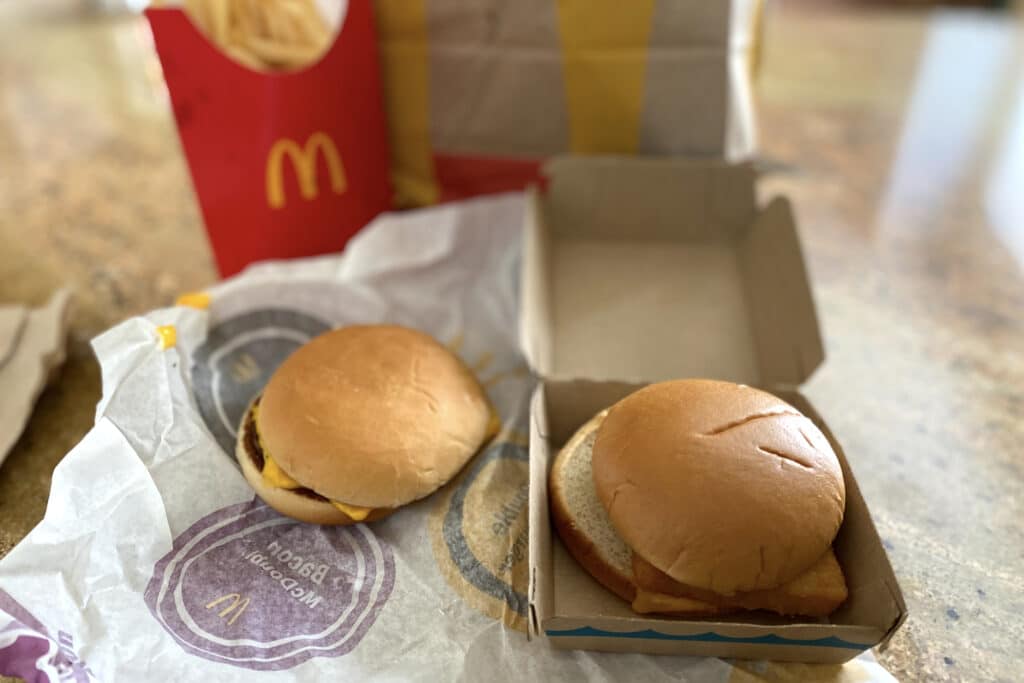 Nope. Nothing but my food.

Seriously, McDonald’s marketing team is missing the boat here. Drop in a mini card with simple photo instructions on one side and a coupon or website push on the other. Easy marketing. Heck, put a survey link on the back via QR code.

Anyways, the first step clearly was to open both buns. 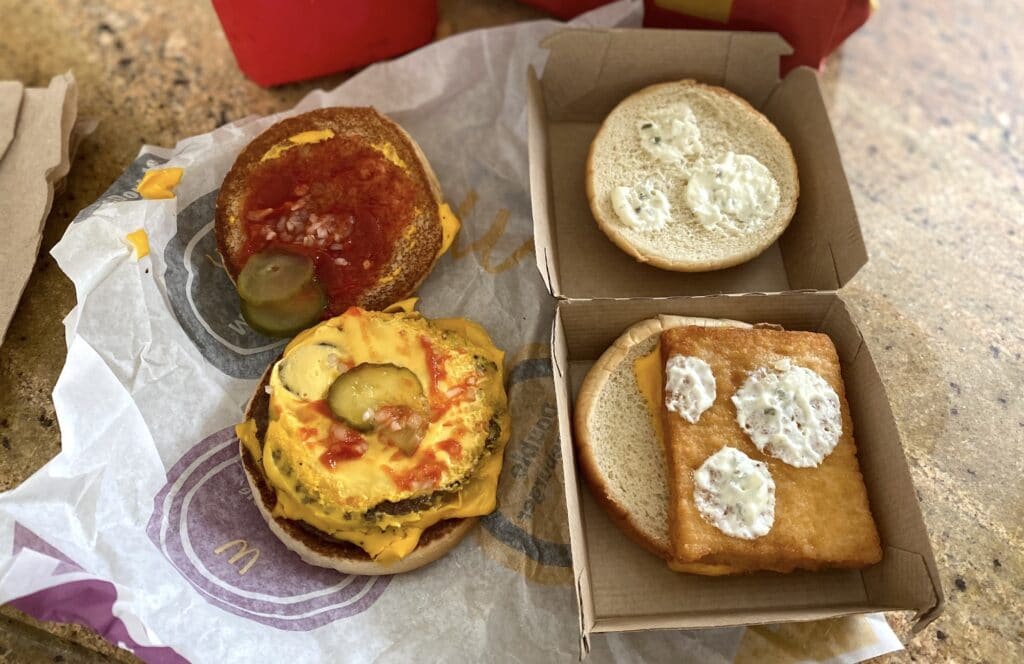 And then I hit my first major snag.

The first step in putting the Surf and Turf together is to separate the two cheeseburgers. But the two burgers are pretty much smooshed together with gobs of cheese, and pickles and ketchup on top for good measure.

Any way you look at it, this is easily the messiest step of the process. You’d think McDonald’s would have included some DIY gloves or something. If nothing else, this one step is all the proof you need to convince McD’s to make the Surf + Turf themselves, rather than a “make it yourself” option. 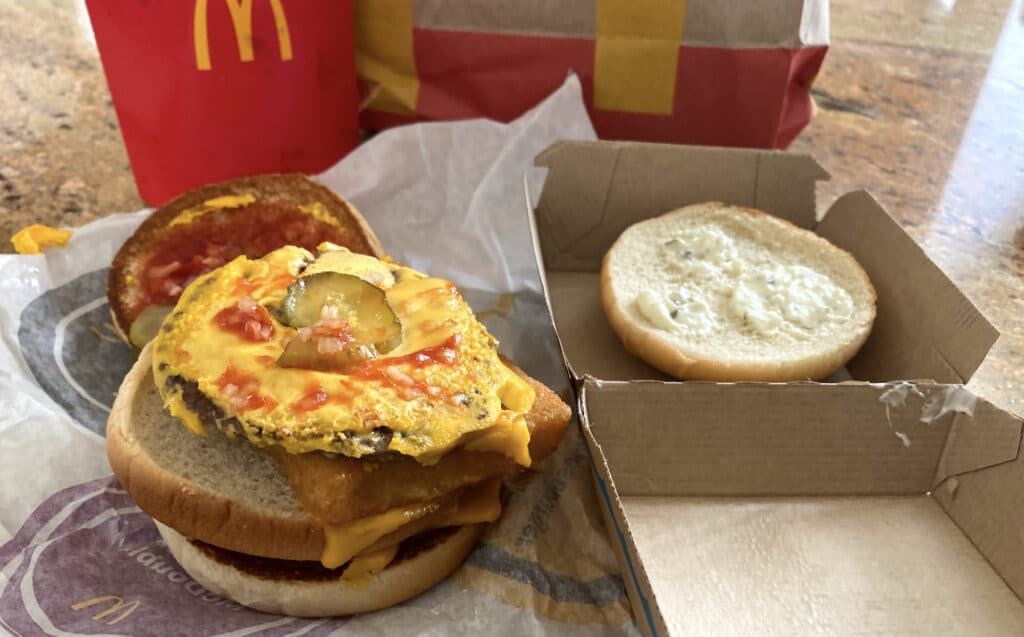 I separated the two cheeseburgers and slotted in the Filet O Fish (minus the top bun) onto one cheeseburger, and then placed the other cheeseburger on top of my Frankenstein creation.

About 26 napkins later, I realized I was stuck.

Without instructions, I wasn’t completely clear on the final step.

There’s the cheesy, ketchup, pickle and onion covered cheeseburger top. And then the purely tartar sauce shmeared one.

I honestly went back and forth a few times and ultimately decided the cheeseburger top makes the most sense, since the burger was on top.

And thus I had completed my very first McDonald’s Menu Hack meal.

I give you The Surf and Turf! 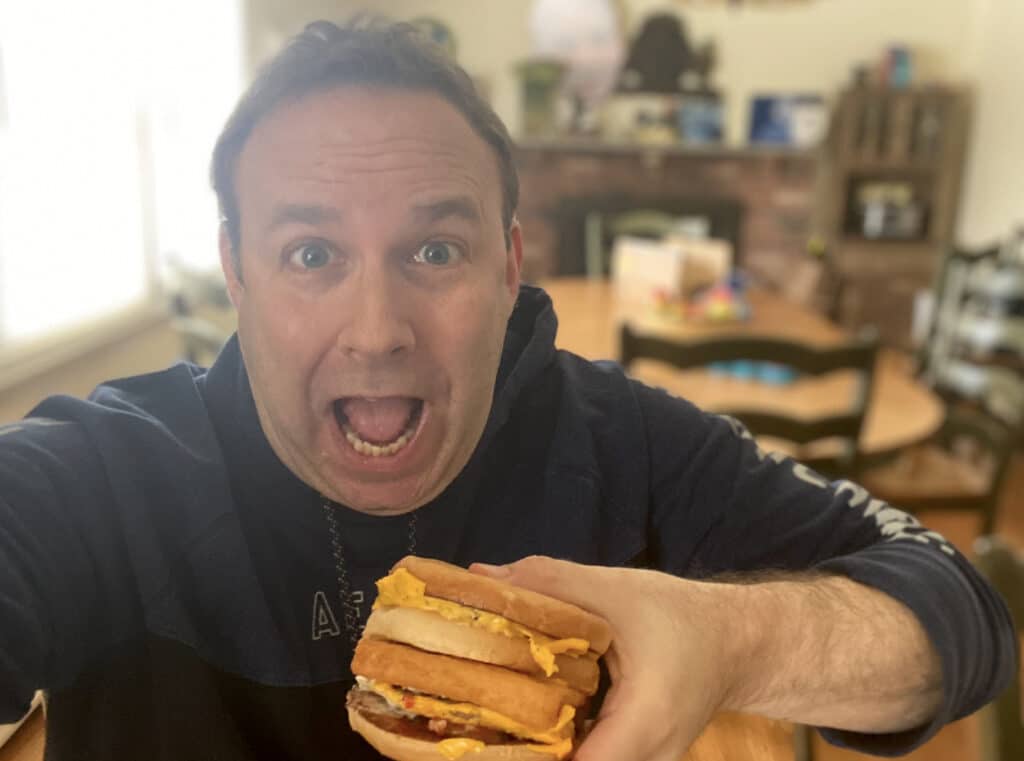 To say I was excited to try this Bad Boy would be quite the understatement. 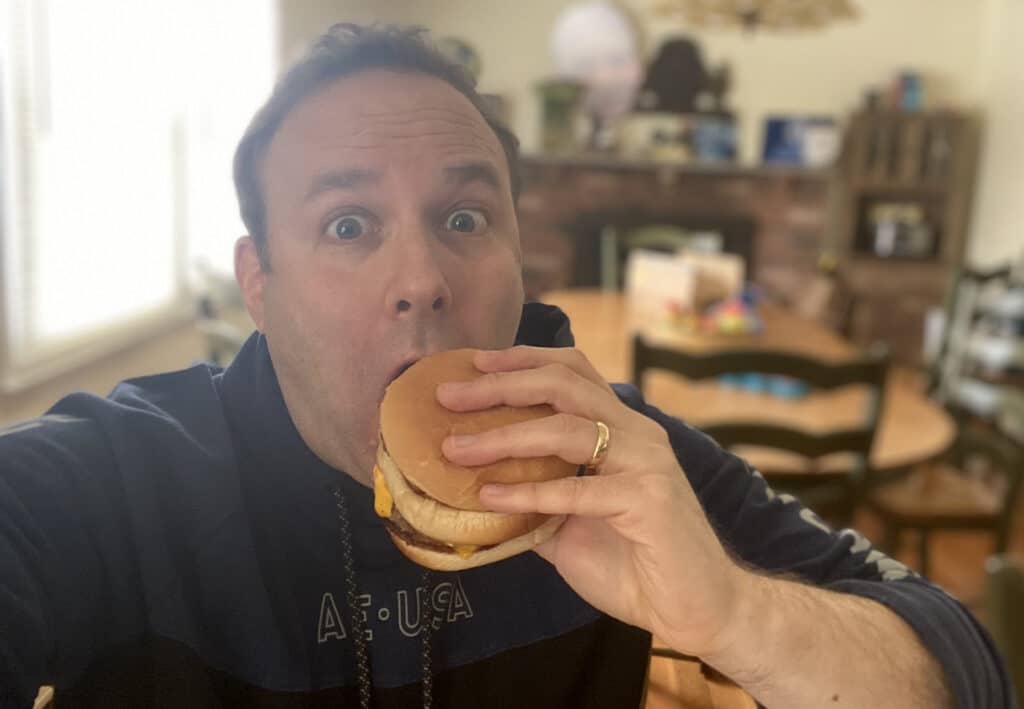 All this build-up. All the anticipation. It’d finally be over with one simple bite. 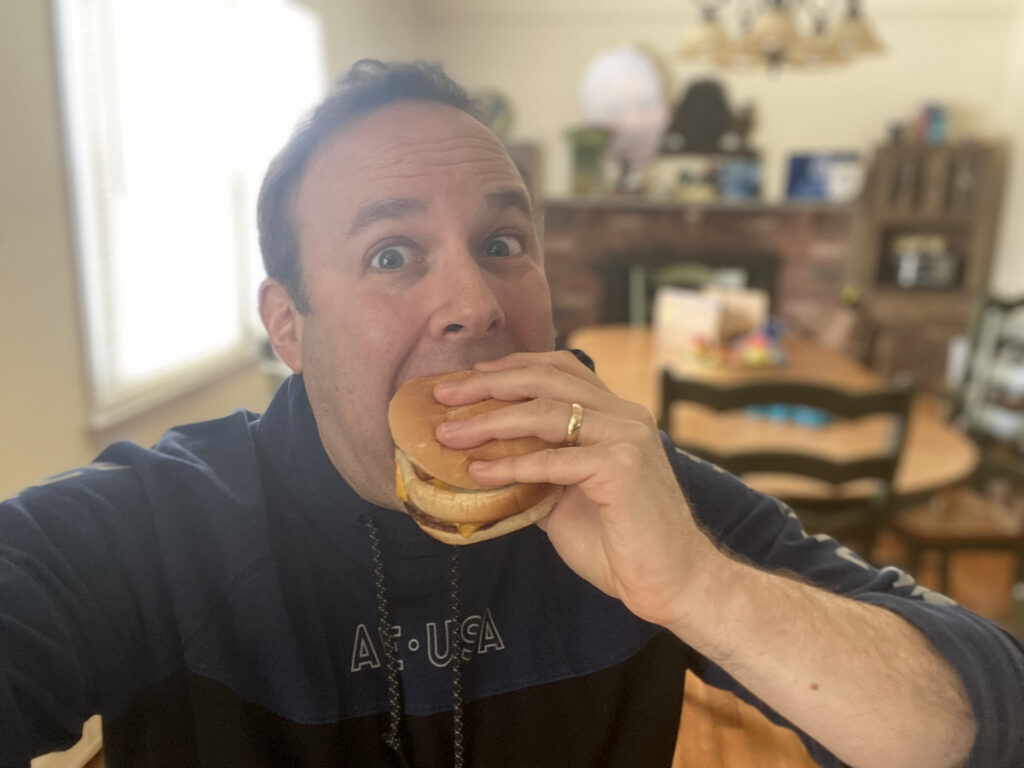 As my teeth bit into the fish-filled double cheeseburger of a meal, I prepared for the worst.

Much like a paper cut, I didn’t have an instant reaction. It took a second or two before the taste really hit my brain.

And to be honest… it wasn’t bad. 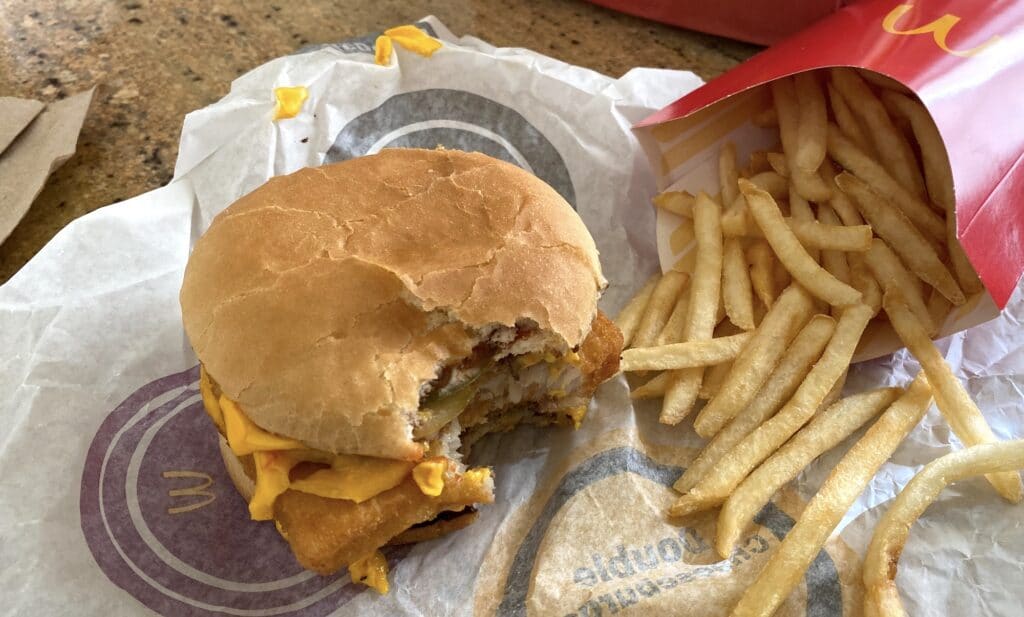 My taste buds were already primed with an “this is going to taste pretty nasty” attitude.

So a “not bad” first bite could really just be due to some pretty low expectations.

So I took a second bite.

And then a third.

Suddenly I realized something completely and utterly insane. I liked it. I really, really liked it!

Much like Cobra Kai, the McDonald’s Surf + Turf has no right to be this good.

It truly defies the laws of physics and taste. But trust me, it’s worth the risk. 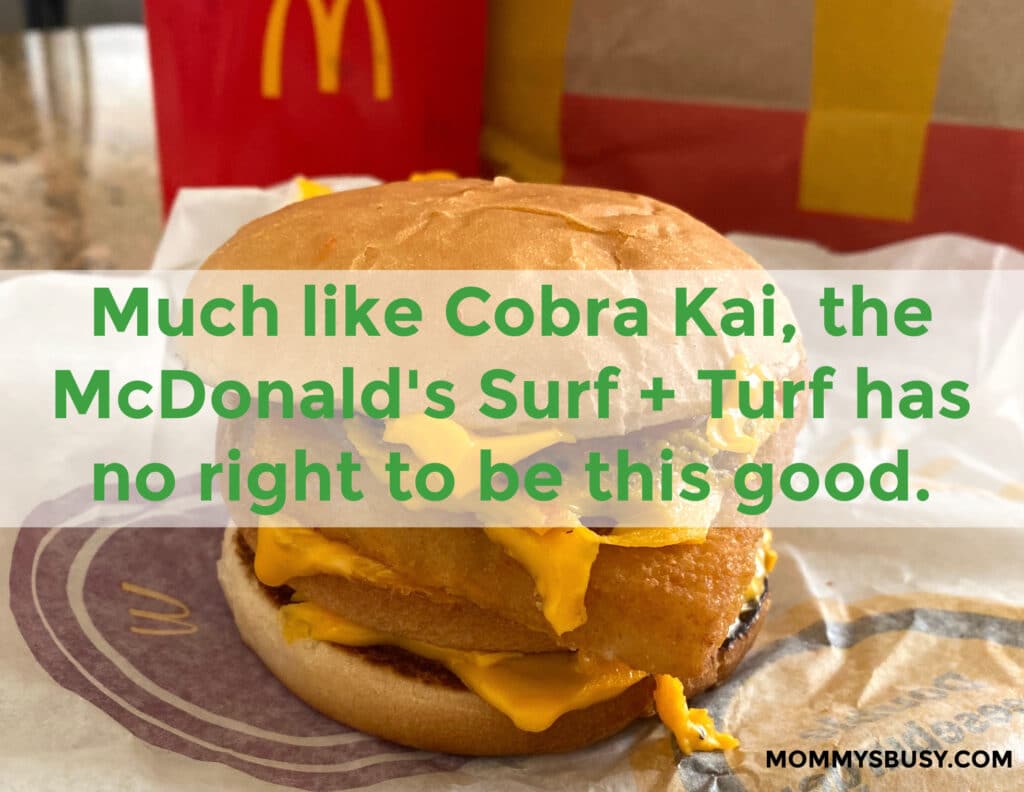 I’m still ticked that McDonald’s is making us customers do the actual work of putting the sandwich together, but that would be my only complaint.

Now my mind is racing a mile a minute. I need to hit White Castle and mix up some fried clams with a Slider with Cheese. Or our favorite Italian restaurant to mash up a pizza with my linguini in clam sauce. Hey, you never know until you try it, right?

Which McDonald’s Menu Hack do you want to try?