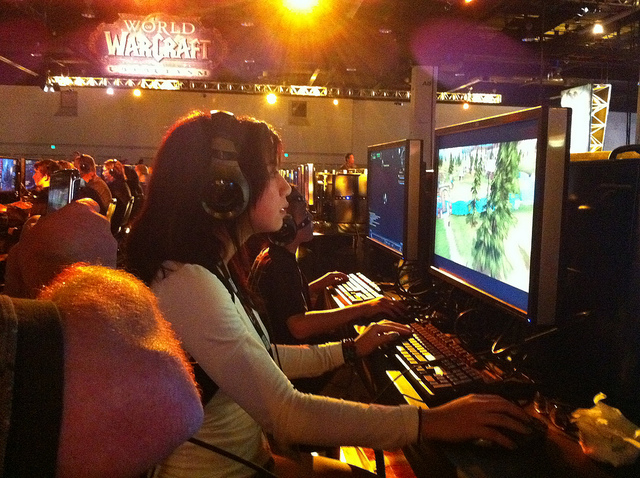 The following post is brought to you by Edward Simpson.

Who says girls can’t play video games, not us!

So with that in mind, here’s a selection of our Top Games for Girls.

It’s a rather imposing MMO that has claimed the social life of many a poor gamer.

It’s a game that’s not dominated by only men as thousands of women also admit to being proud WoW users.

With many even using male characters to cross the plains of Azeroth of the dark Lich infested dungeons.

Developed by Blizzard and launched in 2005, World of Warcraft has dominated the MMO market for years, picking lesser MMO’s out from between its teeth. World of Warcraft is a must-play for anyone who wants to try out the genre.

Plus with the recent texture updates to improve the rather dated looking models and rumours of another expansion pack in the works, World of Warcraft is set to continue being the fantastic MMORPG giant that it always was.

Every site contains some variation of this game either with real cash prizes or just a point scoring system.

Like countless pattern matching games, it takes its roots from Tetris and like Tetris it’s incredibly addictive, plus with a timer that counts down unless you’re hitting big combos, Bejeweled is a must-play for any self-respecting gamer on the go.

Everyone will have at some point played a Tycoon game, either Rollercoaster Tycoon or Hospital Tycoon or even as far back as the late 90’s Jurassic Park creator.

At some point we’ve all dabbled in the Tycoon genre as we try to see how good we are as venture capitalists.

Although it’s a series that isn’t as easy to pick up, as countless abandoned save files will attest to that fact, the Tycoon series is incredibly entertaining.

Zoo Tycoon is no exception, as players are given the role of head zookeeper and are tasked with creating and maintaining one of the best parks ever.

It involves a lot of micro-management, but it pays off once you put enough work into it.

The Sims is one of those series that everyone has played, either openly or as a guilty passion. It’s a massive time sink once you’ve put the effort in, dabbling on it for a few hours here and there when you have some time free during your day.

Most people tend to make themselves and their friends as characters in the game.

Living out their own fantasy life that they dream of having, shortly before they get bored and kill all their Sims off by either locking them in a room or putting them in a swimming pool with no way of getting out so they slowly drown.

An iconic game everyone is familiar with the stereotypical sight of bingo halls packed full of old women, whiling away their days daubing little number pads before that inevitable trip to the grave.

It’s since had a complete overhaul to shake off this rather grim facade as a younger, trendier market has been targeted, with cocktail weekends and ladies nights being arranged by many providers.

Although if you  don’t prefer the halls, balls and daub pens, why not check out the digital version of this game on one of countless Bingo sites that are available online.

From the typical 75 and 90 ball variants from a whole host of different websites such as Bet365 Bingo and Hollywood Bingo, plus a veritable treasure trove of mobile apps means you’ll never be short of ways to get your Bingo fix.

8 thoughts on “Games for Girls”